The electricity system in Belgium is undergoing a rapid and fundamental change. The key trends that are driving the process of energy transition in the country are the growing share of renewable-based energy generation, rising decentralised energy generation and consumption, and intensified international cooperation.

According to the International Renewable Energy Agency’s 2016 estimates, green energies such as solar energy, wind energy and hydraulic energy account for about 7.1 per cent of Belgium’s final energy consumption. With its efforts towards achieving a carbon-free economy, the country is expected to meet its target of 13 per cent energy consumption from renewable sources by 2020.

Investments in Belgium’s transmission network are being driven by the need to renew and redeploy transmission assets for efficient renewable integration. In this regard, Elia has designed its investment plans with a special focus on energy transition. The company is actively working on the upgrade and maintenance of the high voltage (HV) grid to integrate more renewable energy while maintaining the security of supply. The establishment of new cross-border interconnections is also a key component of Elia’s investment strategy, especially in the wake of the shutdown of nuclear power plants (such as Doel 3 and Tihange 2). It aims to increase the country’s electricity import capacity from the current levels of about 3.5 GW to 6.5 GW by 2020.

In 2016, the company invested around Euro 500 million in projects aimed at increasing the cross-border interconnection capacity, renewable integration, HV asset replacement, internal consumption and other non-electrical investments. Going forward, between 2017 and 2020, the TSO is likely to invest around  Euro 1,675 million in the expansion of Belgium’s transmission network. The majority of the funds will be spent on developing interconnections, followed by investments in integrating renewable energy sources and replacing ageing assets. During the same period, Elia is expected to add 207 km of lines (see Table). 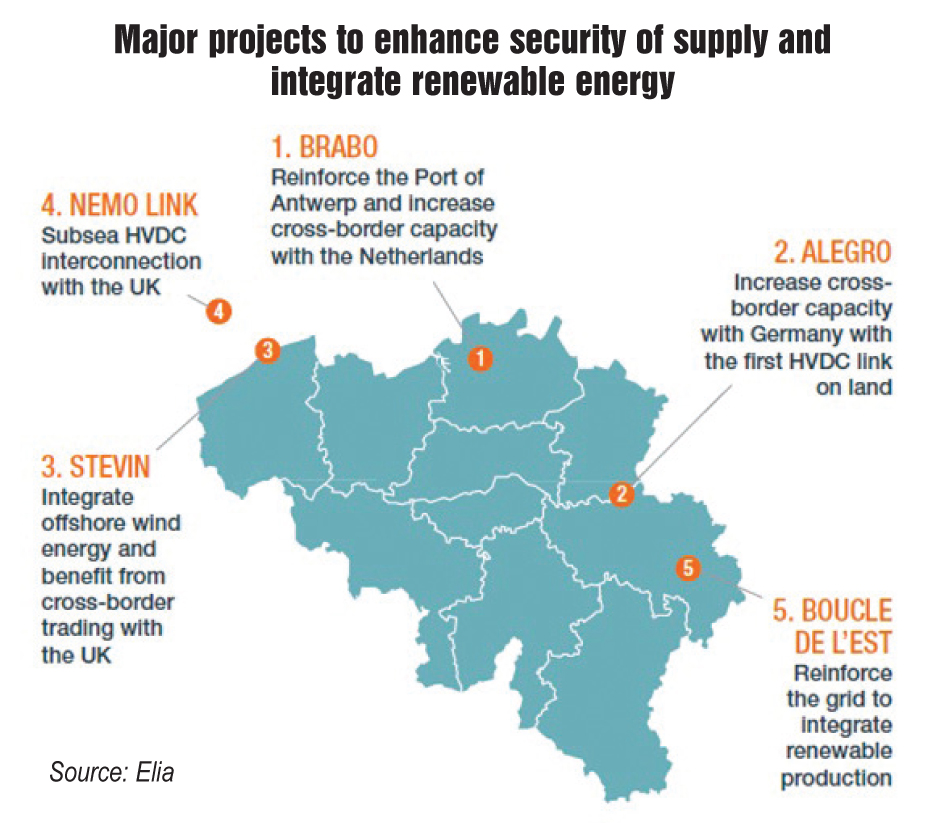 Elia’s development projects can be classified under the following categories:

Enhanced operations of the energy market

The first part entails the construction of a new 380 kV line between the HV substations at Zandvliet (near BASF) and Lillo (near Liefkenshoek tunnel) to replace the existing 150 kV line. Construction work on this section is currently under way and is expected to be completed by 2020. When complete, the first part of the project will form a 380 kV ring around the Port of Antwerp. It also entailed the upgradation of the existing 150 kV line between Belgium’s Zandvliet and Doel to a 380 kV line, which was completed in November 2016.

Apart from these projects, Elia plans to invest Euro 400 million in the creation of a modular offshore grid (MOG) in the North Sea. The MOG will be located 40 km from the coast of Zeebrugge. It will have a platform via which new wind farms will be connected. Three 220 kV submarine cables will be used to connect the MOG with the Stevin substation in Zeebrugge for transmitting electricity from the wind farms to the Belgian grid.

The MOG is being considered as the first building block of a future North Sea grid. It will help Elia in connecting the upcoming offshore wind farms, including Rentel, Northwester 2, Mermaid and Seastar, to the Belgian grid in a reliable and cost-effective manner. The four wind farms are expected to produce about 1.03 GW of electricity. The grid has been designed to create opportunities for future offshore development and interconnections with neighbouring countries in the European Union. Its construction is expected to be phased and synchronised with the time schedules of individual wind farms. At present, Elia is conducting soil condition investigations along the cable route. The MOG is expected to be installed and put to use in the third quarter of 2019.

Belgium’s key focus area in the electricity sector continues to be investments in renewable capacity and the transmission grid. Considering the objective of generating larger volumes of renewable energy, Elia is playing a major role in the country’s energy transition. Overall, the company’s grid plans are in line with Belgium’s renewable energy goals.