The power sector’s progress is crucial to the country’s target of becoming a $5 trillion economy. The sector accounts for the largest share in infrastructure investments. Between 2012-13 and 2018-19, the share of power sector investment in total infrastructure investment varied from 20 per cent to 44 per cent. The share has declined in recent years mainly owing to mounting stress in the generation segment and the financial weakness of the distribution segment. However, with increasing urbanisation and economic development, power demand is expected to grow considerably. This requires huge investments in new capacity development and upgradation of existing infrastructure. As per the final National Infrastructure Pipeline (NIP) submitted by the task force to the finance ministry in April 2020, the total capex expected to be incurred by the power sector (including conventional, renewable and nuclear power) stands at Rs 25 trillion for the 2020-25 period. This accounts for a major share of 22.5 per cent in the total investment of Rs 111.3 trillion in the infrastructure sector. The summary report of the Task Force on National Infrastructure Pipeline for 2019-2025 was earlier released in December 2019. In its latest report, the task force has also outlined various reforms for the power sector to accelerate growth. A look at the report’s key findings… 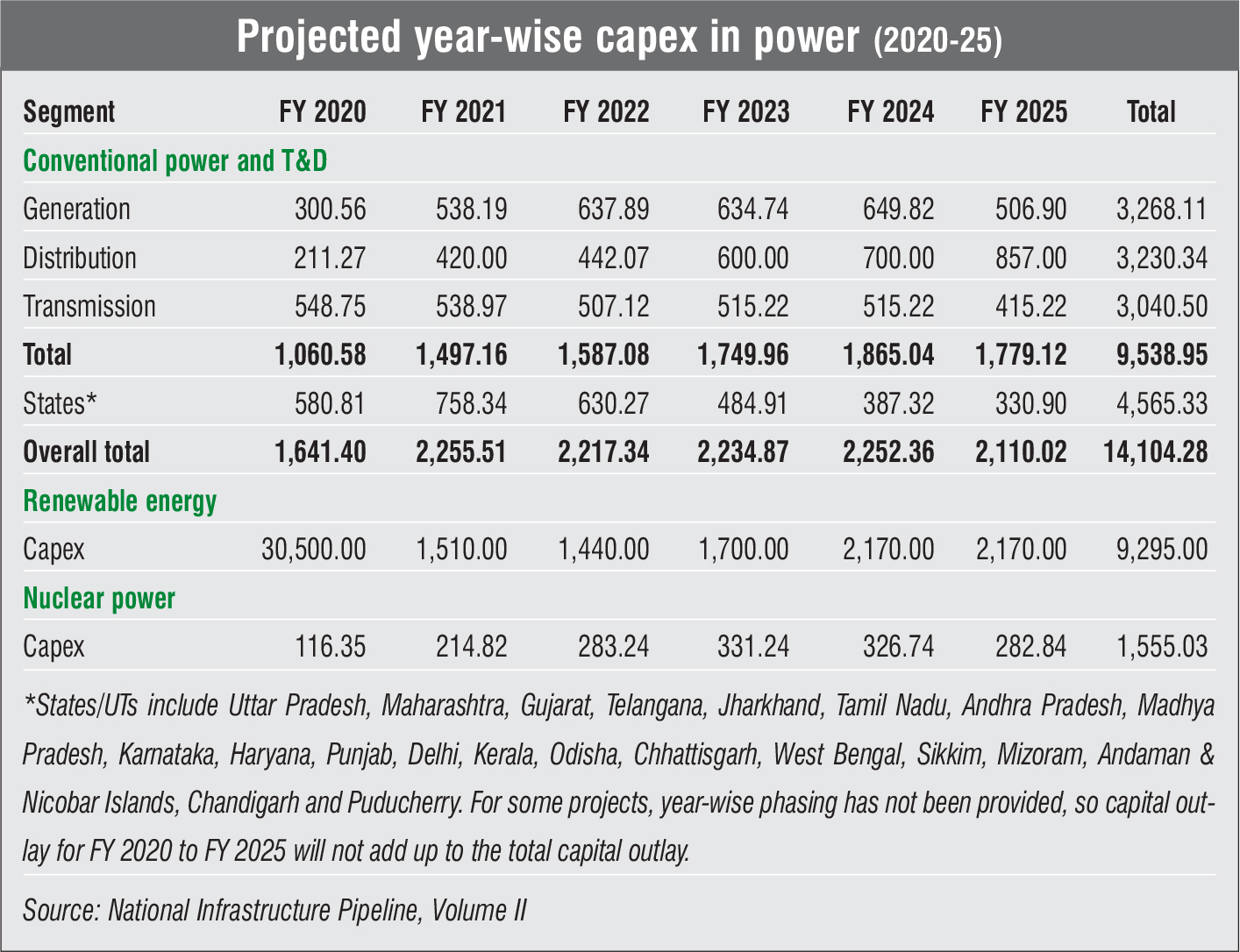 The NIP envisions that 24×7 clean and affordable power will be available to meet the household, industrial, commercial and agricultural requirements in all states and union territories (UTs). The installed generation capacity is estimated to reach 583 GW by 2025 vis-à-vis 370 GW as of March 2020. Of the total installed capacity, 50 per cent will be based on coal, 39 per cent on renewables, 9 per cent on hydro and 2 per cent on nuclear. The per capita electricity consumption is projected to increase from 1,181 kWh in 2018-19 to 1,616 kWh in 2024-25. On the e-mobility front, public charging infrastructure will be set up within a radius of 3 km as well as in all commercial and multi-storey buildings in urban areas. By 2025, about 5 per cent of private cars, 11 per cent of buses, 25 per cent of commercial cars, 32 per cent of two-wheelers and 48 per cent of three-wheelers will be electric. 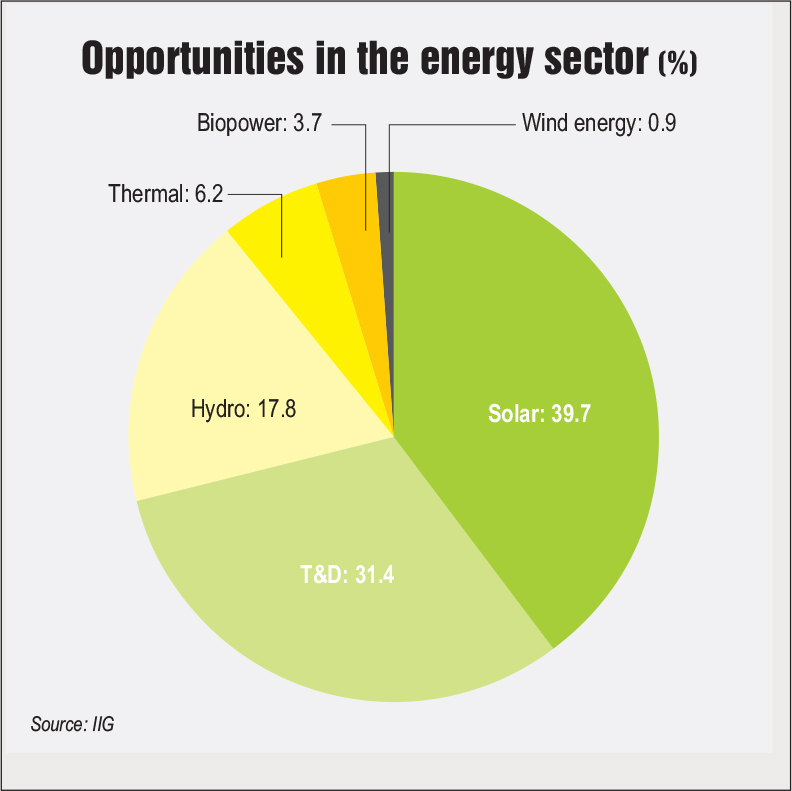 The NIP has estimated a capital expenditure of about Rs 14.1 trillion for the power sector between 2020 and 2025 for projects identified by the public and private sectors. Of the total capex, about Rs 3,268 billion will be for the generation segment, Rs 3,230 billion for distribution and Rs 3,040 billion will be for the transmission segment. The remaining will be contributed by the states. NTPC is likely to spearhead investment in the generation segment with a capex of about 1,200 billion lined up while state transmission utilities will lead the transmission segment with a projected capex of Rs 1,900 billion.

In the nuclear power segment, around seven projects have been identified by Nuclear Power Corporation of India Limited to be implemented at a capex of Rs 1,555 billion. In the renewable energy segment, an investment of Rs 9,295 billion is projected during the five-year period to reach an installed capacity of 265.73 GW by December 2025 from 86.7 GW as of March 2020. Of the total projected investment, over 50 per cent will be made in the solar segment and over 45 per cent in wind, while biopower and small-hydro power will account for the remaining share.

The NIP is a first-of-its-kind government exercise to provide world-class infrastructure across the country, improve project preparation and attract investments (both domestic and foreign) in infrastructure. Considerable investments are lined up in the power sector for the next five years. Thus, there is a need to unlock new financing models to fund the capex requirements. The task force has suggested ways and means of financing the NIP such as deepening corporate bond markets, including those of municipal bonds, setting up development financial institutions for the infrastructure sector, accelerating the monetisation of infrastructure assets and land monetisation. The task force has also recommended that three committees be set up – a committee to monitor NIP progress and eliminate delays; a steering committee in each infrastructure ministry for following up on implementation; and a steering committee in the Department of Economic Affairs for raising financial resources for the NIP. Further, the task force is enabling marketing of a project pipeline through the India Investment Grid (IIG) portal. A list of 264 energy sector projects showcasing opportunities worth over Rs 1,373 billion is posted on the IIG website (accessed on May 26, 2020). Of these, nearly 40 per cent of projects (109 projects) are in the solar power segment, followed by T&D (75 projects), hydropower (56 projects) and thermal power (12 projects). The remaining are based on biopower (nine projects) and wind (three projects). In terms of investment, thermal projects entail opportunities worth Rs 525 billion, followed by solar power (Rs 365.87 billion), hydropower (Rs 350 billion) and T&D (Rs 115 billion). Assam, Ladakh, West Bengal, Madhya Pradesh, Jharkhand and Andhra Pradesh have maximum investments lined up in energy sector projects. There are also around 61 stressed assets in the energy sector that have been listed on the IIG portal as viable opportunities for potential investors.

To conclude, the NIP is a notable initiative taken by the government to provide visibility to upcoming projects and help potential investors and stakeholders identify opportunities in the infrastructure sector.