The scope for procuring energy from renewable resources is constantly expanding to include emerging technologies. In the past year, the renewable energy sector in India has made significant progress in upcoming segments such as offshore wind energy, ocean energy and hydrogen-based power. A proposed offshore wind energy project off the coast of Gujarat and the government’s clarification on the inclusion of ocean energy under renewables has expanded the scope of the sector to cover the seas. New hydrogen-based power applications are also coming up, opening doors for a cleaner and more sustainable fuel in the transport sector. Aided by advanced technologies, these segments are expected to have a good potential and may play a pivotal role in India’s renewable energy sector in the near as well as long-term future.

The Ministry of New and Renewable Energy (MNRE) introduced the National Offshore Wind Policy in October 2015 to harness the offshore potential in the country. Following this initiative, the MNRE announced medium- and long-term targets for offshore wind energy in June 2018. The targets for 2022 and 2030 have been set at 5 GW and 30 GW respectively. However, achieving these targets will be challenging, given the logistical constraints of installing offshore wind systems. Tasks involved in the process, such as arranging installation and support vessels, undertaking subsea cabling and setting up an offshore transformer, will be difficult and expensive.

Wind resource assessment has revealed that the southern part of India as well as parts of the western coast offer significant potential for offshore wind power, with Gujarat and Tamil Nadu having a potential of over 30 GW each. To gather more accurate data on wind quality measurements, a light detection and ranging (LiDAR) system has already been installed near the Gujarat coast, which has been gathering measurements about the quality of offshore wind since November 2017. For future projects, the National Institute of Wind Energy (NIWE) is planning to deploy five more LiDAR systems to gather long-term measurements across new sites. To aid India’s offshore wind endeavour, the First Offshore Wind Project of India funded by the European Union has been set up to support the MNRE and NIWE.

During the past year, the MNRE has invited expressions of interest for 1 GW of offshore projects in India, which have received a good response from domestic as well as global players. The government is planning to approve viability gap funding worth $909 million to support the offshore project, which is now up for final approval. The government funding is expected to compensate the project developer for the high capital costs, which may not get covered with the power purchase tariff that has already been set at Rs 3.50 per kWh. 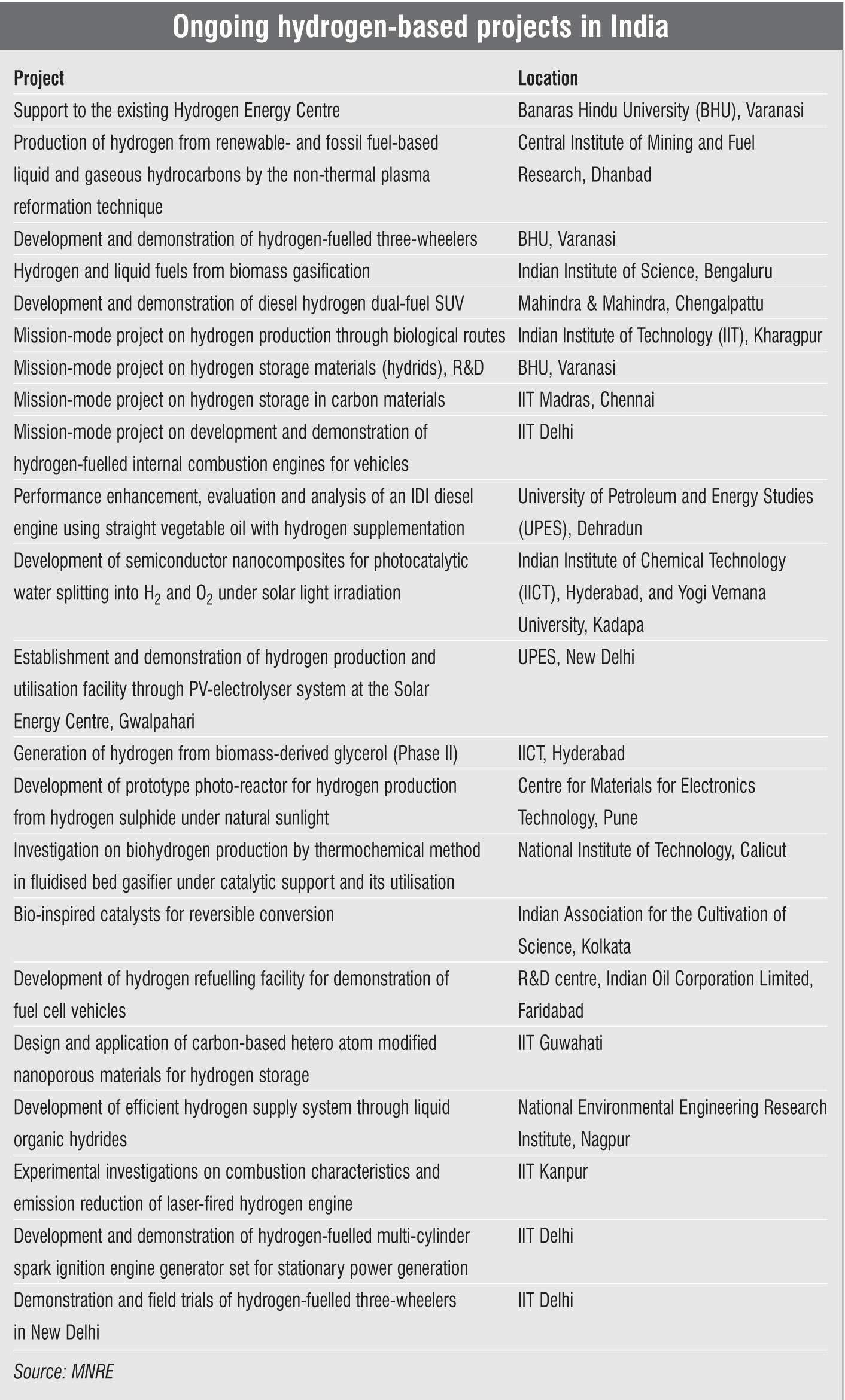 Ocean energy or marine energy includes all forms of renewable energy derived from the sea including wave energy, tidal energy, current energy, salinity-gradient energy and ocean thermal-gradient energy. In August 2019, the MNRE clarified that the power produced using various forms of ocean energy will be considered as renewable. Although no projects exist currently, ocean energy can be harnessed using a select few technologies pertaining to wave, tidal, current and ocean thermal energy. All entities willing to utilise ocean energy have been invited by the MNRE for demonstration of projects with proven technologies under the currently active Research, Design, Development and Demonstration programme.

The total wave energy potential is estimated to be about 40,000 MW, whereas ocean thermal energy conversion (OTEC) has a theoretical potential of 180,000 MW in India, subject to suitable technological evolution. Although OTEC has a higher initial capital cost, it can become an attractive option due to virtually free fuel, a high capacity factor of 94 per cent, no associated emissions and very low operating expenses.

The MNRE approved the national hydrogen energy road map (NHERM) developed by the National Hydrogen Energy Board in 2006. The project aims to reduce India’s dependence on the import of petroleum products and provide electricity to remote, rural and other electricity-deficient areas while promoting the use of hydrogen as a fuel for transport and power generation. The NHERM has projected that by 2020 an aggregate capacity of 1,000 MW hydrogen-based power will be set up and one million hydrogen-fuelled vehicles would be on Indian roads.

Active research areas for hydrogen energy include setting up of dispensing stations for the use of hydrogen as well as hydrogen-CNG blend as fuel in automobiles. However, most of the activity in this segment is in the research and development (R&D) phase, with application on a larger scale much further down the road.

There is vigorous pace in R&D in emerging technologies for applications in offshore wind energy, ocean energy and hydrogen-based power. However, the commercialisation of technologies in these segments has yet to overcome hurdles. A challenge common to these segments is cost. Installing offshore turbines and harvesting tidal energy involve very high capital costs, which make these projects financially unviable. The extraction and storage of pure hydrogen is not only a difficult process on a commercial scale, but is also very expensive. In the case of offshore wind energy, there is also a lack of historical data and a slew of approvals required to move a project forward. Despite these impediments, the continuing developments indicate a promising future for these segments.