The rising heap of waste is creating a public health hazard in the country. In this scenario, biogas has emerged as a promising solution. Anaerobic bacteria break down food waste, which is disposed of in landfills, to produce biogas. However, the process releases methane, a potent greenhouse gas (GHG), into the atmosphere, contributing to global warming. Biogas plants can tap this methane to generate electricity with the help of turbines and generators that can convert one form of energy into another.

Biogas is thus a renewable energy source that is generated through anaerobic digestion of biodegradable organic feedstock, which includes municipal, industrial, animal and agricultural waste. It has high methane content (40-70 per cent), which can be purified and upgraded to natural gas quality (75-99 per cent methane content). The upgraded biogas can be injected into a natural gas grid or used as transport fuel (bio-CNG or compressed biomethane).

The replacement of fossil fuels and untreated traditional solid biomass with clean fuel like biogas for cooking, lighting and electricity generation will help in curtailing GHG emissions and indoor air pollution. The nitrogen content in the slurry after anaerobic digestion is more than that in untreated animal manure. Thus, it can be used as an organic fertiliser. The use of this bio-fertiliser would partly or fully offset the need for chemical fertilisers, which consume a high amount of energy during production. Besides providing energy and manure, biogas production reduces the negative impacts of organic waste such as groundwater and soil contamination, and the emission of local air pollutants like dioxins, furans and methane.

Both technical and non-technical barriers impede biogas production and distribution in India. For example, the various waste, renewable energy and urban policies have implications for biogas uptake. Also, the type of barriers and their impact on different biogas systems vary owing to the differences in technology maturity, feedstock availability and quality, supply chain, awareness level and policy support.

The government launched the first programme to support the biogas industry in 1981. It has since implemented several schemes such as the National Biogas and Manure Management Programme, the Biogas Power (Off-grid) Programme, and the waste-to-energy (WtE) programme. But it was only in 2016 that rules regarding the management and handling of solid waste (first notified in 2000 by the then Ministry of Environment and Forests) were revised. Also, the central government released a new tariff policy for electricity distribution companies to mandatorily procure 100 per cent electricity generated from WtE plants and the Ministry of Power announced a generic tariff for WtE projects. Regardless of these efforts, the adoption of biogas technologies faces several constraints.

Barriers to biogas penetration differ based on the utilisation area, substrate, resource potential, technological maturity, scale and region. There are socio-cultural barriers like objections to the use of animal and human waste as raw material in specific regions. Some barriers are specific to the utilisation of biogas in transport or heat production. For example, a number of filling stations are not willing to use biogas as vehicle fuel.

To increase the dissemination of biogas in urban areas, there is a need to break down the following barriers:

The government initiated a demonstration programme to test the economic and technical viability of biomethanation technology. However, the industry still does not have a well-established commercialised biogas technology functioning at the industrial scale for processing heterogeneous waste in urban India. Some financial institutions are reluctant to give credit for biogas projects in the absence of well-developed technology and due to the high failure ratio.

Market barriers: Biogas is not as competitive as other fuels in the electricity sector such as coal and natural gas. The operations and maintenance costs of biogas-based power plants are quite high compared to thermal power plants. Also, electricity from other renewable sources like solar, hydro and wind is cheaper than electricity produced using anaerobic digestion due to government support like fixed feed-in tariffs (FiTs) and renewable purchase obligations.

Biogas-based power plants cannot compete with large-scale coal power plants. Even though feedstock is available for free, the cost of handling and transporting waste over long distances is high, negatively affecting power plant economics. In the absence of a government mandate specific to biogas-based power, it is difficult to sell electricity generated from biogas plants to offtakers, and maintain a continuous revenue stream.

Though slurry can be used as an organic fertiliser, it has to compete with heavily subsidised chemical fertilisers. Anaerobic digestion technology faces competition from other low-cost waste treatment technologies such as composting, vermi-composting, and waste-to-pellets that can also be used for treating organic municipal and industrial waste.

Regulatory and institutional barriers: Incentives like guaranteed FiTs and regulatory power purchase obligations are necessary for the diffusion of the technology in this relatively immature market. This is evident in the case of solar and wind technologies in India where strong political will and investment-friendly policies of the government have driven growth in the past decade. Government incentives like FiTs, long-term financing, capital grants, viability gap funding and tipping fee for waste collection and handling are not in place. In the absence of these, biogas projects cannot become economically viable on a large scale, which discourages private investment in this sector.

There are also uncertainties related to feedstock supply and quality due to inefficient supply chains and low collection efficiency in India, which can hamper the production efficiency of plants and their profitability in the long run.

Municipal corporations are responsible for waste management in urban areas. Due to their limited financial and technical capabilities, it is challenging to manage the growing solid waste in an integrated manner without the involvement of private players. There is also a lack of coordination between national and state governments. A generic tariff for electricity generated from biogas and WtE projects was announced by the Centre in 2016. However, the state electricity regulatory commissions (SERCs) have still not fixed a generic tariff for electricity from anaerobic digestion-based power plants. Thus, it is difficult to assess the project viability at the pre-investment assessment stage due to the unpredictability related to the power purchase agreement prices determined by the SERCs. Risks associated with revenue streams, technology and feed supply are primarily borne by private players. This deters them from participating in the sector.

Biogas can be upgraded, bottled and utilised as bio-CNG, without modification in vehicles. But it is only recently that a bio-CNG policy has been introduced in India. In addition, there should be proper legal standards in place, and preferably a single-window regulatory approval system for grants and permissions from different government departments like the Petroleum Explosives Safety Organisation, the Ministry of Environment, Forests  and Climate Change, etc.

Technical and infrastructural barriers: The segregation of organic and non-organic waste is not done in urban households resulting in low quality organic feedstock. Dust and inert material also exist in varying degrees. Thus, sorting of waste is required before digestion at the plant, further increasing the overall generation cost and complexity. Moreover, poor collection and unorganised transportation of waste, especially in medium/small cities, increase the supply chain disruption risk.

The failure to supply the committed quantity of waste to plants by municipal authorities was identified as one of the reasons for the shutdown of WtE plants. Process standardisation is challenging due to large variations in waste characteristics across different regions. Also, there is a lack of available land space, faced by the Pune Municipal Corporation among other utilities. Therefore, local officials are strongly encouraging the use of biogas plants in commercial establishments in the city. Local council offices have set up demonstration plants, which use local food waste and provide gas for making tea for officials and their visitors.

Knowledge sharing among different states related to innovative dissemination strategies and success stories would also help increase the adoption of biogas technology in India. They can also look to developed countries like Germany and Sweden for policy lessons to promote the technology. For instance, government ban on the disposal of municipal solid waste to landfills has changed the waste management scenario in Germany and augmented the demand for biogas plants for managing organic waste. The Indian government should enforce waste management rules to stop the disposal of organic wastes in landfills to avoid water and air pollution.

The participation of biogas project developers in waste collection, segregation and transportation can help them achieve better control over the substrate quality. Awareness campaigns should be launched to explain the need for waste segregation to bring about a change in people’s habits.

In the long term, proper regulations regarding organic and inorganic waste segregation should be enforced to reduce the variations in feedstock quality, and technologies should be standardised for a consistent quality and composition of the waste. Biogas-based plants should also be exempted from scheduling and unscheduled interchange charges till feedstock quality is not assured.

Moreover, the integration of waste pickers working in the informal waste management sector will streamline the whole supply chain. It will help improve their working conditions as well as socio-political integration.

Strict policy measures are required to increase biogas production from municipal and industrial waste. Since municipal corporations have limited financial capacities, public-private partnerships should be encouraged to increase private investment in the WtE sector. Further, financial support from the central and state governments is required to bridge the viability gap and make biogas projects economically viable. Financial incentives like accelerated depreciation and tax holidays will also help attract big private players to this sector. 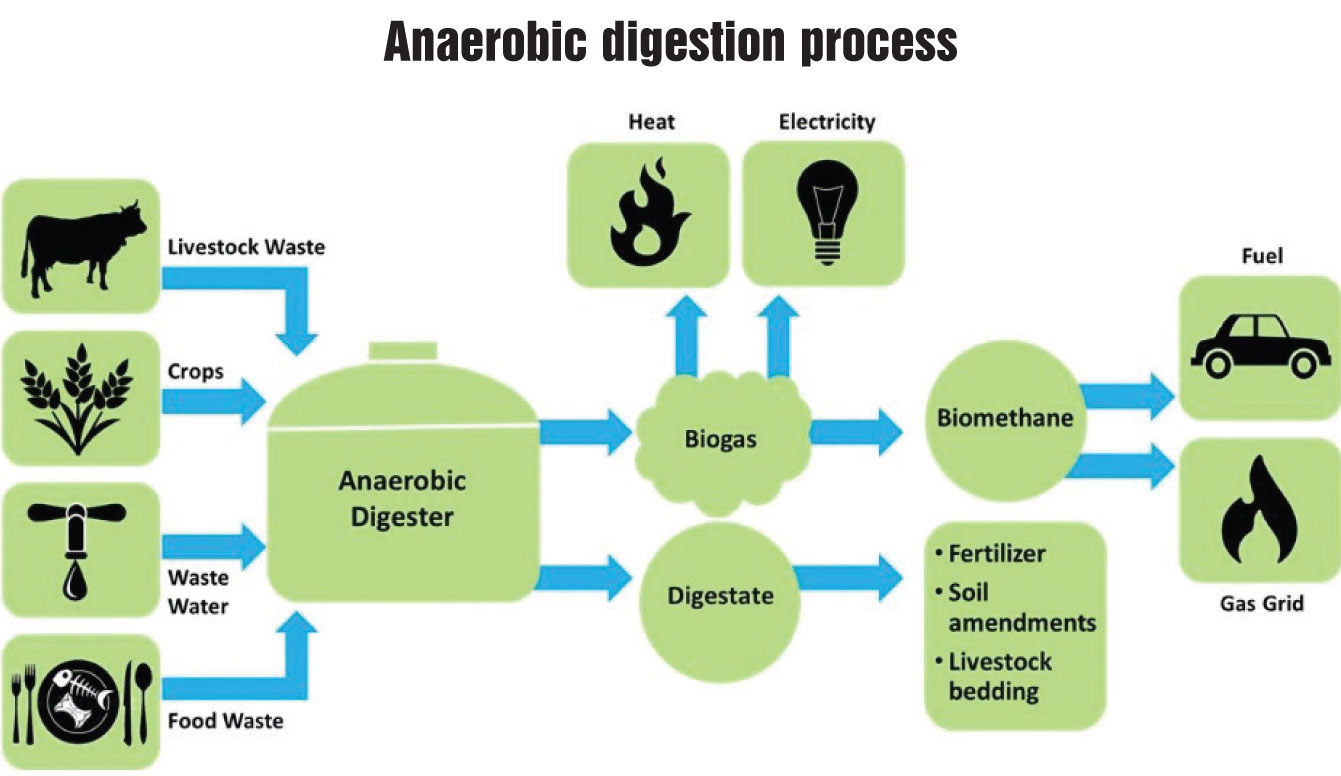 Despite these barriers, a beginning has been made. In June 2018, the East Delhi Municipal Corporation (EDMC) announced its first biogas plant on 2 acres of land near Ghazipur dairy. The project aims to produce electricity from cattle waste and address the twin problems of waste disposal and power generation in neighbouring areas. The proposed plant is expected to consume at least 100 metric tonnes of cow dung every day and produce around 2 MW of electricity, which would be fed into the grid and thus generate revenue.

“The contractor will have to buy cattle waste exclusively from the Ghazipur dairy. The bidder who pays the highest amount to the cattle owners will be awarded the contract,” says Bipin Bihari, EDMC mayor. These dairies are struggling to cope with the knee-high level of cow and buffalo dung on their premises. About 110 metric tonnes of cattle waste is generated daily at the Ghazipur dairy. In the absence of any disposal system, people dump it in the storm water drains, leading to massive waterlogging in the area.

“Around 1 tonne of waste has the capacity to generate 60 cubic metres of gas, which can be used to produce electricity to light at least 200 street lights for eight hours,” said a senior EDMC official. The latter will fund the project with Rs 25 million and supervise its performance regularly.

The South Delhi Municipal Corporation is also working on a similar project to use the cattle waste generated in the Nangli dairy, Goyala dairy and Kakrola dairy, and two cow shelters at Najafgarh for power generation.

In conclusion, a strong policy push is needed in the waste management segment in urban areas to deal with the rising urban waste treatment problems and costs. It is only recently that the government has set a long-term target for increasing electricity generation capacity based on urban and industrial waste.

The European Union is the world leader in biogas electricity production, with more than 10 GW of installed capacity, while in India power production from biogas has started only recently, that too on a very small scale in some states. Therefore, India could learn from the European experience to fast-track its biogas programme.