Driven by large-capacity tenders and rapid installations, solar power overtook wind in terms of new capacity additions in 2017-18. Roughly 9.3 GW of solar capacity was added during this period, against a meagre 1.7 GW of new wind capacity, even though wind power has the largest share amongst renewables. A similar trend is being observed in 2018-19 with the solar utility-scale market moving rapidly towards achieving the 60 GW target.

Enabling government policies combined with the private sector’s willingness have increased India’s solar capacity by almost 9 times since 2014-15. Some of the world’s largest solar parks are coming up in India while large projects such as the 1 GW ultra mega project in Kurnool, Andhra Pradesh, and Adani Group’s 648 MW Kamuthi project in Tamil Nadu are already operational. Such projects have led to India becoming one of the world’s leading solar power markets. Several factors indicate that this trend is only going to continue.

Solar power plants have a shorter gestation period than other power sources. Also, solar radiation is widely available across India, unlike wind energy and small hydro, which are limited to certain locations. In addition, the government has taken consistent steps to remove the bottlenecks in project allocation, development and power transmission. Central and state government agencies are conducting mega auctions to encourage competitive pricing and ensure power offtake. Solar parks are being implemented in various parts of the country with a plug-and-play set-up for developers’ ease. The Green Energy Corridors project is under way, which aims to create suitable and efficient transmission systems for renewable power. The central government has also exempted inter-state transmission charges for wheeling of solar power. Interestingly, solar power growth has not been symmetrical in 2018-19 even across the six states that lead in terms of cumulative solar capacity. Hence, while Tamil Nadu, Andhra Pradesh, Karnataka and Maharashtra have witnessed high capacity additions this year, Gujarat and Rajasthan have reported very few new installations. This uneven growth can be attributed to the changing policy and regulatory dynamics across states, the availability of transmission infrastructure and the credit-worthiness of state distribution companies (discoms). 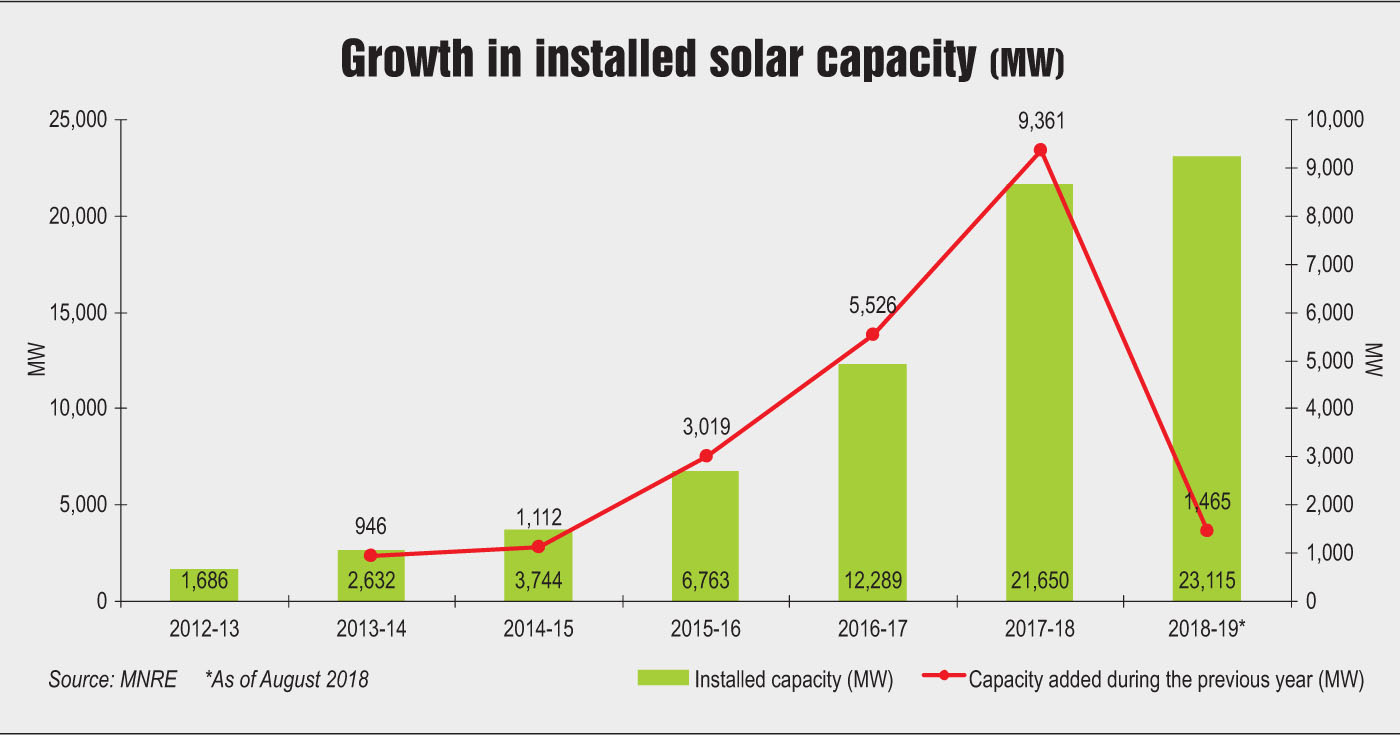 The highly competitive Indian solar power market is constantly evolving and creating space for players offering cutting-edge services and products at the lowest prices. Players unable to sustain themselves in this neck-and-neck competition get acquired by larger players with deeper pockets or diversify into other spaces as well. Consequently, many developers and engineering, procurement and construction (EPC) contractors that are the current market leaders (October 2017 to September 2018) as per BRIDGE TO INDIA were not even in the top ten rankings last year. However, the same statistics show that the leaders in the module supply segment have remained more or less the same as last year.

The Indian solar market has become an attractive business opportunity for several international players such as SoftBank, Engie, Sembcorp and Canadian Solar. While many domestic players are finding it difficult to match their prices due to the higher interest rates in India, some have already got access to low-cost funding to help them stay and win in this intense competition. 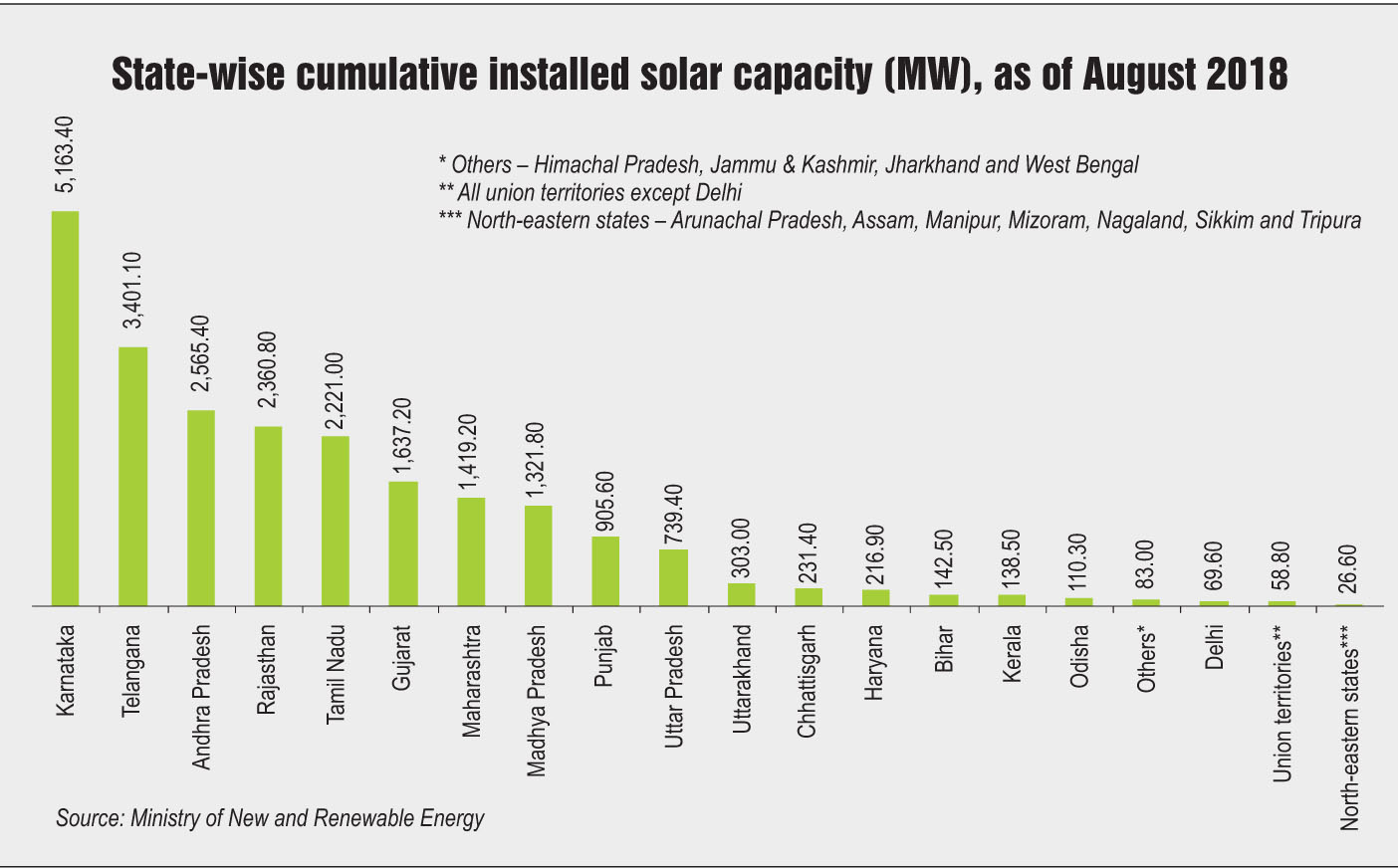 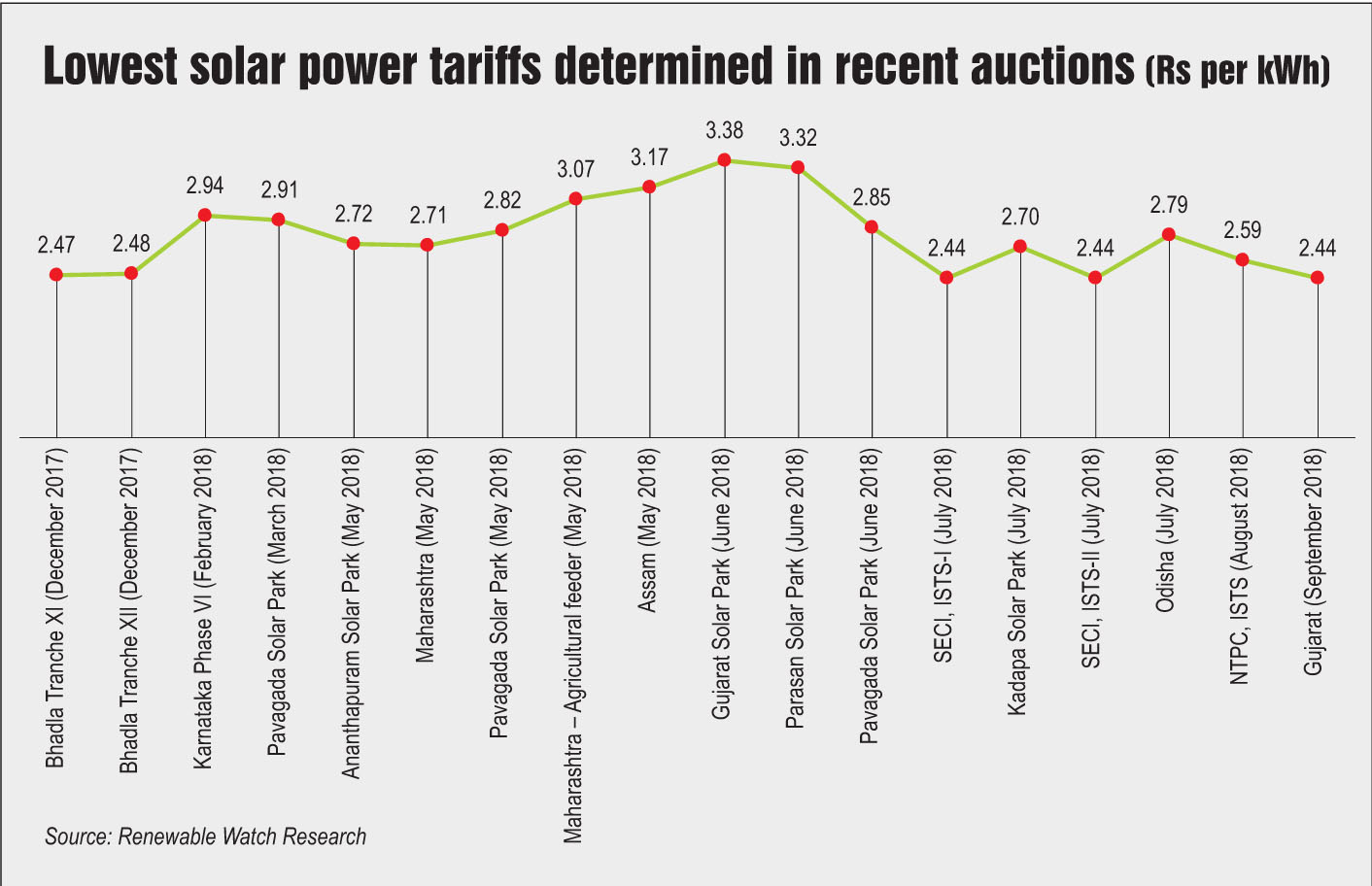 Solar power tariffs have witnessed a high degree of fluctuation since December 2017. The tariff rose from Rs 2.47 per kWh in December 2017 to Rs 3.38 per kWh in May 2018 and eventually came down to Rs 2.44 per kWh in July 2018. The tariffs have remained in the Rs 2.44 to Rs 2.79 per kWh range over the past four months. Historically, greater economies of scale, the entry of global players, the availability of foreign funding and a fall in module prices led to a dip in tariffs. However, tariffs started rising slowly in early 2018 due to transmission constraints and uncertainty about safeguard duties.

On July 30, 2018, the Ministry of Finance (MoF) announced the levy of a 25 per cent safeguard duty on solar cells imported from China and Malaysia for the next two years. These duties were imposed to safeguard the interests of domestic manufacturing firms, which lag behind their foreign counterparts offering cheaper products. There was a round of discussions followed by stay orders by two state courts, which were finally overruled by the Supreme Court in September 2018. Consequently, the tariffs started declining again after the uncertainty regarding safeguard duties was resolved. 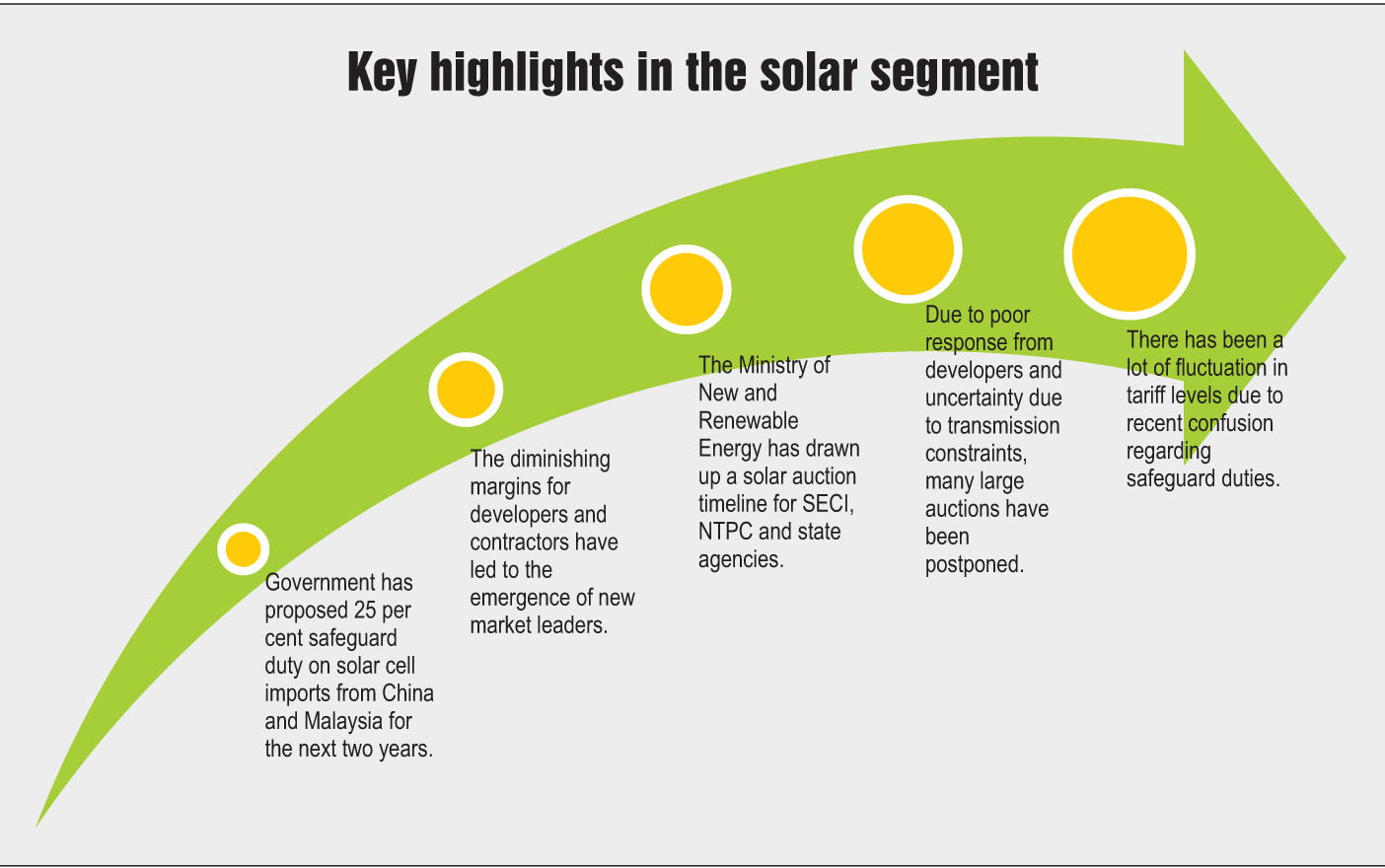 The decline in tariffs, while partly attributed to developer confidence, was also a result of the low ceiling tariffs mentioned in the tenders. Hence, while many developers kept bidding at low levels so as to maintain an active project pipeline, others chose to stay away from these auctions so as to safeguard their margins. In fact, the past few months have seen unprecedented delays in tendering activity. Many tenders have been postponed due to poor response from developers and issues of  higher tariffs raised by central and state agencies. Transmission unavailability is another issue that has contributed to tender delays in recent months.

The Solar Energy Corporation of India’s tender for 3 GW of manufacturing capacity linked to the setting up of 10 GW of solar projects was postponed many times. The tender has received only one bid possibly due to a low ceiling tariff of Rs 2.75 per kWh and the hesitation of developers to enter the manufacturing space and compete with Chinese modules.

These recent developments coupled with the depreciating currency have left the solar segment in a flux. However, the fact is that any policy or regulatory change is accompanied by a short period of uncertainty, after which things fall back into place. In time, the solar power market will also adjust accordingly and provide improved visibility for stakeholders. Meanwhile, the government has released a solar auction schedule to assure developers of upcoming capacity. If implemented successfully, this will lead to not only planned project allotment, but also timely construction of transmission systems and hence, sustained development of solar projects.