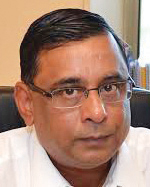 Whatever job he takes up, Saurabh Kumar finds himself in the vanguard of reform. What could be more pioneering right now (apart from artificial intelligence) than ushering in electric vehicles (EVs); switching the entire government fleet to EVs; and creating a whole new infrastructure of charging stations to support these cars? It’s a fascinating job and after five years as head of Energy Efficiency Services Limited (EESL), Kumar has lost none of his enthusiasm.

EESL, set up to lead India’s energy efficiency programme to reduce carbon emissions as a part of its climate change goals, has kick-started the government’s EV programme, under which half a million cars used by the government, its agencies, public sector undertakings and regulatory bodies will, to begin with, be replaced with electric cars.

The government fleet is a subset of the wider goal of promoting electric mobility. Kumar himself has been driving an electric car to commute between his home near India Gate to the EESL office in Noida and is happy with the experience.

EESL has also launched India’s revolutionary LED bulb replacement programme, Unnat Jyoti by Affordable Lighting for All (UJALA), to hand out affordable bulbs to people. It distributes 400,000-500,000 bulbs a day.

Kumar is an Indian Revenue Service officer of the 1992 batch. He is an electrical engineer from IIT Kanpur and has a master’s in public policy from the National Graduate Institute of Policy Studies, Tokyo, Japan. He has worked in various capacities in the Income Tax Department, the Ministry of Power, and with the Bureau of Energy Efficiency (BEE) under its founder Dr Ajay Mathur.

He joined the power ministry in 2002 as deputy secretary in charge of the budget and financing wing at the time when the Electricity Act, 2003 was introduced and distribution reforms were being started. Between 2007 and 2010, he worked at BEE, helping to set up the organisation at precisely the time when energy efficiency had become a focus area for the government.

Although his term at EESL was supposed to end in April 2018, Kumar has been asked to continue for another two years. “I am happy with that It’s been an incredible journey, often doing things that are not only being done for the first time in India but often for the first time in the world “he says.” I mean, who else in the world has 5.2 million light bulbs? What can be a better demonstration of India’s commitment to energy efficiency than this.”