Round-the-clock (RTC) power, as the name suggests, literally means po­wer supply that is available 24×7, th­roughout the year. In the case of renewab­les, resource intermittency is a critical dra­w­­back, preventing assured RTC power su­pply from standalone solar and wind power plants. Solar and wind power have variable generation patterns and are impacted significantly by local weather phenomena. For instance, solar power can be harness­ed on­ly during sunshine hours and may be affected by cloud cover. Similarly, wind po­w­er, which is the highest during the morning and the evening, would get impacted if the wind suddenly stops blowing.

This variability was not a big concern wh­en renewable energy injection into the grid was low. However, with 110 GW of re­newable power capacity already online and at least 400 GW additional installations targeted by the end of this decade, the impact of variable renewable capacity on the grid needs to be factored in. Thus, as the grid becomes greener with increasing volumes of renewables, RTC power su­­pply becomes more critical to ensure that the grid is balanced, energy demand and supply are adequately managed, and intermittency issues do not hamper the efficiency of the power system.

In recent years, there has been a significant focus on hybridising and blending of two or more energy sources so as to achie­ve better synergies, higher plant load factors and greater energy gains. In India, wind and solar power have complementary generation patterns and thus, hybridising these two sources helps in achieving a ne­ar-smooth power output. Adding another energy source such as hydro or biomass or energy storage makes the generation pattern firmer and improves flexibility. Now th­ermal power is being blended with rene­wables to ensure stable generation and utilisation of the existing coal-based power plants. RTC power supply goes a step further to ensure that quality clean power is made available round the clock – using a mix of different renewable and conventional energy sources, if required. 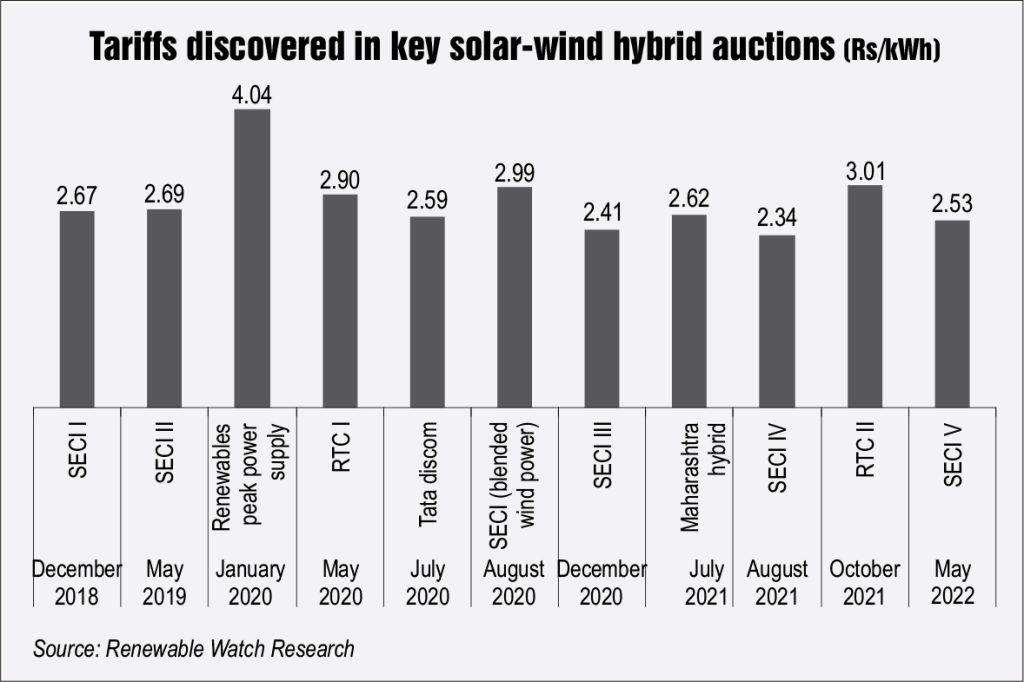 Both the government and the industry have been focusing significantly on developing hybrid projects and moving ultima­tely towards RTC power supply arran­ge­­ments. Various ministries have been in­ter­vening actively to provide the requir­ed po­licy support for various combinatio­ns of renewable hybrid projects. In 2018, the government issued the National Wind-Solar Hybrid Policy and followed it with guidelines for the procurement of wind-so­­lar hybrid power through tariff-based co­mpetitive bidding (TBCB) in 2020 and subsequent amendments.

To address the intermittency issue of re­newables, the government proposed a sc­heme in early 2020 to sell renewable and thermal power together in a “bundle” to provide firm, uninterrupted electricity su­­pply to buyers. While this still did not as­s­ure RTC renewable power, it was an en­couraging step in this direction. In July 2020, the government announced guidelines for procuring RTC power from grid-co­nnected renewable energy projects supported by thermal power projects. The guidelines directed that at least 51 per cent of the power supplied should be so­ur­ced from renewable energy projects, which may include storage. Further, pow­er generators would have to ensure at le­ast 85 per cent availability annually as well as during peak hours.

In November 2020, the government am­en­ded these guidelines and directed that RTC projects could be bundled with any non-renewable energy source, while previously it could be combined with only thermal power. The amended guidelines further specified that there could be only one non-renewable energy source in the bundle and that it also must have spare generation capacity such that it can supply RTC power in the long run. The latest amendment to the RTC guidelines for procurement of RTC power from grid-connected renewable energy projects complemented with power from any other source of storage provides that the bidding evaluation parameter will be the weighted average levellised tariff per unit supply of RTC power. 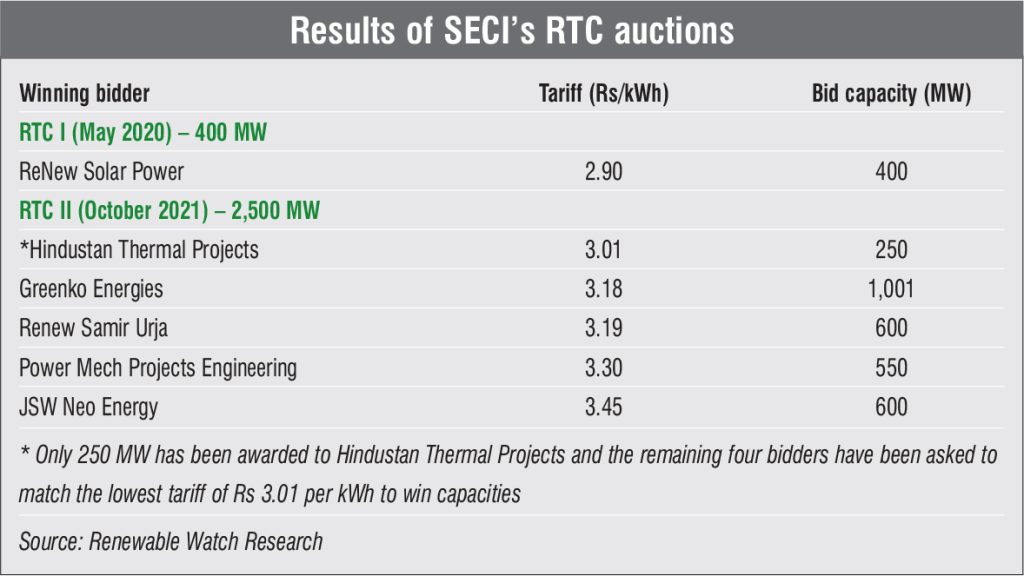 These policy interventions have provided the much-needed confidence to developers for setting up hybrid and RTC power supply projects. Many hybrid power-ba­sed auctions have been conducted. Most of th­em have been highly successful with competitive tariffs, while a few have witnessed a tepid response. Five tranches of solar-wind hybrid auctions have been conducted by the Solar Energy Corpora­tion of India (SECI). The fifth one was held in May 2022 in which the lowest tariff discovered was Rs 2.53 per kWh. This tariff is quite high compared to the Rs 2.34 per kWh achieved in the fourth auction in August 2021. The hi­gh­er tariff is attributed to supply chain issu­es, high commodity prices and import du­ties on solar modules, and may increase further in case of more upheavals.

Alongside these plain hybrid tenders, SECI has been innovating with various ten­­der frameworks to improve grid flexibility, address power demand concerns, and attract discoms and developers alike. In this regard, in January 2020, SECI conducted a unique auction to procure 1.2 GW of renewables plus storage power ca­pacity in the form of assured peak power supply. Greenko emerged as the winner, securing 900 MW of capacity at a weighted average tariff of Rs 4.04 per kWh and a quoted peak tariff of Rs 6.12 per kWh. Re­New Power secured the remaining 300 MW of capacity with a weighted average bid of Rs 4.30 per kWh and a quoted peak price of Rs 6.85 per kWh. For renewable en­ergy supplied during off-peak hours, SECI will pay a pre-specified tariff of Rs 2.88 per kWh. This tender was released in August 2019 and was oversubscribed by 420 MW. The winning tariffs discovered in the auction are quite attractive for disco­ms as well, especially when compared to the cost of new thermal power.

To further address demand and intermittency concerns, SECI issued the first RTC tender in October 2019, which concluded with competitive tariffs. In May 2020, Re­New Power won the SECI auction for 400 MW of RTC power. The 25-year PPA for the project was signed with SECI in 2021 at Rs 2.90 per kWh with annual increases of 3 per cent for the first 15 years, after which it would stabilise for the remaining period of the project. The RTC project will require the setting up of about 900 MW of wind power and 400 MW of solar power with battery storage projects. These would be spread across Rajasthan, Karnataka and Mahara­sh­tra. The 400 MW of power will be sold to various buying entities and utilities including NDMC, New Delhi, and Daman & Diu and Dadra & Nagar Haveli. In April 2022, ReNew Power announced a strategic partnership with Mitsui & Co. Limited, wherein the latter will acquire a 49 per cent stake in ReNew Power’s 400 MW RTC project.

In October 2021, SECI announced the re­sults of its second RTC auction. The tender was launched in March 2020, originally for the delivery of 5 GW of RTC power from grid-connected renewable power projects, coupled with power from coal-based thermal projects. In August 2020, SECI issued amendments to the tender documents wh­e­rein the capacity was halved to 2.5 GW. Among other amendments, bidders could tie up any amount of non-renewable power capacity. In the reverse auction, Hindustan Thermal Pro­jec­ts emerged as the single winning bidder, quoting the lowest tariff of Rs 3.01 per kWh (L1 tariff), and was awarded 250 MW of capacity.

Four other bidders that quoted low tariffs – Greenko Energies, Renew Samir Urja, Po­w­er Mech Projects Engineering and JSW Neo Energy – need to match the L1 price of Rs 3.01 per kWh in order to get letters of award. Greenko Energies quoted a capacity of 1,001 MW at a price of Rs 3.18 per kWh, followed by Renew Samir Urja, which quoted Rs 3.19 per kWh for 600 MW. Be­hind them were Power Mech Projects and JSW Neo Energy, which quoted Rs 3.30 per kWh for 550 MW and Rs 3.45 per kWh for 600 MW respectively. However, there is a significant difference between the L1 tariff of Rs 3.01 per kWh and even the second lowest bid of Rs 3.18 per kWh. And the difference between the lowest and the fifth lowest tariff, quoted by JSW Neo Energy, is slightly less than half a rupee. Thus, it mi­ght be challenging for the other four bidd­ers to match the L1 tariff, and SECI may have to retender the remaining capacity of 2,250 MW to get favourable results.

Secure power supply from renewable so­urces, achievement of RPO mandates, cost-competitive tariffs without fuel price risk and proper utilisation of the grid are the key drivers for discoms to opt for RTC-ba­sed arrangements. With appropriate policy support and the expected demand for RTC power in the future, developers and large power PSUs are exploring the potential of renewable energy-based RTC projects. Apart from the recent auctions, companies have announced their own plans in this space.

A key player is Greenko Energies, which is developing three multi-GW-scale integrated renewable energy storage projects with national grid connectivity in Karnata­ka, Andhra Pradesh and Madhya Prade­sh. These projects will harness solar and wind power resources with storage infrastructure, mainly in the form of pumped storage, to provide RTC power to the grid. In September 2020, NTPC Vidyut Vyapar Nigam signed an agreement with Green­ko for exploring the possibility of trade, collaboration and partnership for integrated renewable energy storage projects set up by Greenko to offer RTC renewable po­wer to potential customers.

This year, the Greenko Group and Ayana Renewable Power decided to collaborate to create robust and despatchable renewable energy solutions for industrial and distribution companies, including RTC power supply of up to 1 GW. Soon after, Greenko en­tered into another strategic partnership with ArcelorMittal to set up a 975 MW nominal solar and wind RTC project with an ex­pected investment of $600 million. The project will be supported by Greenko’s hy­dro pumped storage asset, and will be owned and funded by ArcelorMittal.

A few other companies have also announ­ced their intent to invest in this space. For instance, in November 2021, SJVN Limited and PTC India Limited signed an MoU to collaborate on the development of products for supplying RTC power. SJVN and PTC will collaborate to develop products for the delivery of renewable energy from SJVN’s projects combined with available market capacity for the supply of RTC power. Then, in January 2022, NTPC Re­ne­­wable Energy, a wholly owned subsi­diary of NTPC Limited, issued a request for proposals from developers to build interstate transmission system-connected energy storage systems with a capacity of 3,000 MWh. NTPC will use the energy storage assets to meet its renewable energy RTC requirement with a wind-solar profile under the service model. More recently, Bihar State Power Holding Company Limi­ted has signed an agreement with SECI to provide clean electricity to Bodh Gaya and Rajgir, two cultural centres and major tourist attractions. Repor­te­dly, Bihar will be the first state in the country to provide two towns with clean, green electricity 24 ho­urs a day, seven days a we­ek. The power sale agreement covers 210 MW of renewable energy.

To conclude, RTC-based renewable po­wer supply arrangements – that blend a variety of renewable, conventional and storage resources – are the way forward for India to meet its clean energy ambiti­ons. This blending or hybridisation not only addresses the intermittencies in re­ne­wable power generation but also en­sures a more flexible and sustainable en­ergy mix for the future. 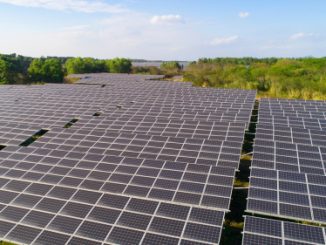 August 9, 2022
In accordance with the Gujarat Urja Vikas Nigam Limited’s tender to purchase 750 MW (Phase-XVI) of solar power, GSECL has requested bids for the...
More 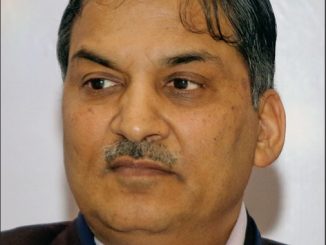