The wind power segment has witnessed a slowdown in recent years due to low capacity addition and undersubscribed tenders, and is set to fall short of the government’s flagship target of 60 GW by 2022. A fundamental reason for this slowdown is the increased risk perception of developers due to tariff uncertainties, lack of clarity on rule changes, payment delays from discoms, and delays in grid connectivity and land acquisition.

The increased project risks have raised the return on investment (RoI) expectations. While in a normal scenario, a high RoI expectation would mean an increase in tariffs quoted by developers, competitive pressures from other segments, especially solar power, have not let them quote higher bids. Moreover, it would create a mismatch between the discom offered tariffs (upper ceiling) and the developers’ required tariffs.

The impact of the growing mismatch was reflected in the recent wind power tenders. Take, for instance, the Solar Energy Corporation of India’s (SECI) long-delayed 2.5 GW “wind blended with solar” tender (Tranche IX, ISTS), the result for which was announced in August 2020. The tender, which had an upper tariff ceiling of Rs 3 per kWh, was significantly under-subscribed, with only 970 MW of capacity awarded to two project developers. Vena Energy Vidhyuth Private Limited won 160 MW of projects, quoting the lowest tariff of Rs 2.99 per kWh, while JSW Solar was awarded 810 MW of projects at Rs 3 per kWh under the bucket filling method. JSW had originally placed bids for 970 MW of projects. No other developer had quoted a tariff of less than Rs 3 per unit.

Many developers have been reluctant to participate in wind auctions of late. In a recent development, Spanish renewable energy developer Acciona and Germany’s Nordex have expressed a bearish sentiment regarding India’s wind energy prospects. Acciona has decided that it will not participate in wind auctions in India until returns become more lucrative. However, they will continue to maintain their existing assets, which include 164 MW of wind projects in Karnataka and 350 MW of wind projects in the pipeline.

Wind turbine manufacturer Nordex too is not optimistic about India. The company secured a 300 MW order from a developer in Tamil Nadu some time ago, but the project is facing execution issues because of the global pandemic. The company is reportedly not keen to supply to any other projects in India, although it intends to continue manufacturing turbines in India for export purposes.

To some extent, these developments may indicate that competitive bidding, which led to the reduction in tariff as compared to the feed-in tariff regime, has not worked in favour of the industry. The real issues, however, are at the institutional, sectoral and economic levels.

On the one hand, the low tariff expectations of discoms have discouraged developers from participating in auctions. On the other, these fund-starved discoms are unwilling to sign more contracts with intermediary procurers such as SECI and NTPC for their previously awarded projects at a comparatively higher tariff. Reportedly, around 16.8 GW of solar and wind energy capacity is currently stuck owing to the reluctance of discoms to sign up new developers. In fact, due to the recent low-price bids, these discoms are tariff shopping and are reluctant to sign power supply agreements (PSAs) for these projects, which involve a potential investment of around Rs 600 billion.

Payment delays from debt-ridden state-owned discoms remain a major concern for developers. As of December 2019, state-owned discoms still owed Rs 818.94 billion in payments to power producers. The implementation of a new payment security mechanism from August 2019 is reportedly improving the payment of dues, but the government has to ensure the strict enforcement of this mechanism. A discom reform scheme expected to be announced in the near future could potentially include the privatisation of debt-ridden discoms to improve their performance.

The ongoing Covid-19 pandemic is largely responsible for the lag in discom-led and corporate PPA activity in India, with many deals put on hold. Corporations want to wait for production levels to go back to normal, and power demand to become more stable before taking a call on long-term power tariffs.

Discoms too are waiting for power demand to get back to normal before committing to long-term purchases. The Covid-19 pandemic and the resultant lockdown have further strained the finances of discoms. In an official statement, the ministry noted, “Revenues of the power distribution companies have nosedived as consumers are unable to pay for the electricity consumed while power supplies, being an essential service, have been maintained. Energy consumption has decreased substantially. The liquidity of the power sector is not expected to improve in the short term, as economic activity and power demand will take some time to pick up.”

While the slowdown is largely due to the pandemic, procurement activity had slowed down since 2019 when many supportive state-level policies were phased out. Moreover, regulatory uncertainty has become a key issue in the past year as utilities struggle to control their losses. Many utilities are raising their open access charges to bolster their earnings, making third-party procurement unviable, while others are pushing for retroactive changes to operational policies. Overall, this is a difficult time for corporate buyers in India.

Nevertheless, most corporations in India choose to purchase clean energy through the open access mechanism, which allows electricity users with a connected load of more than 1 MW and a minimum connected voltage of 11 kV to buy power directly from third-party generators. Within open access, the group captive model has historically been the main way that companies buy clean energy. Under this model, several corporations and an independent power producer jointly invest in a renewable energy project, and the corporations consuming at least 51 per cent of the energy generated. The key procurement mechanisms and policies in other markets, such as sleeved retail programmes and onsite generation, vary in popularity and policy support across states and have met with opposition from discoms.

Several uncertainties prevail at the regulatory level. Aggressive tariff caps in auctions, such as the SECI ISTS-wind tender Tranche IX, and retrospective renegotiations are a common problem across the country. This is despite the recent MNRE announcement regarding the removal of tariff caps.

Some states and discoms are attempting to unfairly burden renewable energy developers to reduce the average cost of supply or they are abandoning legally binding contracts signed before renewable tariffs declined. For example, the governments of Andhra Pradesh, Uttar Pradesh and Punjab are seeking to renegotiate their clean energy contracts for operational projects. This type of short-term approach is degrading the sector’s investment risk profile and introducing sovereign risk issues for foreign investors.

India’s transmission capacity grew in tandem with renewable capacity between 2015-16 and 2017-18, with average additions of 25,000 ckt. km per year. However, as per IEEFA’s estimates, only 10,625 ckt. km of new transmission capacity is expected to be added in 2019-20 (based on the 7,083 ckt. km added during April-November 2019). The recent slowdown in renewable energy development appears to have diminished the urgency of building new transmission capacity. While the current economic downturn has added to financial pressures, it has also emphasised the need to accelerate infrastructure spending, particularly in domestic power generation and grid infrastructure. The government must take steps to attract investments into the transmission sector in order to drive wind power growth, particularly in wind-rich states. Land constraints are also hampering the growth of wind power projects and must be addressed.

Last, but not the least, the segment is facing headwinds due to competition from solar power. The current predominance of solar over wind is not because of cost competitiveness as PV and onshore wind have a very similar LCoE in general terms. The simplicity and modularity of PV make it suitable for small-scale projects. While it is expected that the learning curve of PV will continue to be faster than that of wind, allowing solar panel costs to be reduced quickly, it is also true that PV production is limited to certain times of the day, impacting energy market prices. Moreover, with lower module prices, the focus shifts to other cost components such as costs related to balance of plant and permits, whose learning curve is not so steep. Finally, PV could encounter land use issues.

With regard to wind power, the main issues pertain to logistics given the higher hub heights and larger turbine blades, which are the basis for the continuous learning curve. Nevertheless, the distribution of wind resources over different hours of the day in a specific geography and the compatibility of wind projects with other land uses may become an advantage over time. The future prevalence of one or the other technology will depend on their availability in a specific geography. Therefore, it is hard to estimate which technology will prevail over time.

While stand-alone wind power project development continues to face hurdles, wind-solar hybrid renewable energy projects are set to boom in India with a 15 GW build-out planned over the next five years. Industry analysts believe that this could possibly act as a saviour for the country’s faltering wind industry. Combining the attributes of strong daytime solar production and windy overnight conditions to maximise a single grid connection is seen by power distributors as an attractive alternative to the intermittency problems of stand-alone renewables. This can be further strengthened by the addition of storage to the equation. In this regard, it is important to mention that the only two tenders that have performed extremely well in the recent past have been for renewable energy hybrid projects. In fact, all hybrid tenders released since 2018 have drawn a good response.

The projects under SECI’s first 2018 wind-solar hybrid tender, which awarded 1.2 GW at an average price of Rs 2.67 per kW, are due to go online in 2020. In the subsequent auctions, hybrid projects found a “competitive sweet spot” around the Rs 2.90 per kWh mark for offering round-the-clock power. As compared with any other conventional source of power, this tariff fares best. SECI also opened a 1.2 GW tender for wind, solar and storage this year. Apart from SECI, state and other entities including the Railway Energy Management Company have opted for hybrid procurements.

However, for the wind-solar-storage hybrid model to be successful as well, several of the aforementioned challenges would need to be addressed. With land and connectivity being concurrent list subjects, greater centre-state cooperation is required. As D.V. Giri, secretary general, Indian Wind Turbine Manufacturing Association, states, “Coordination is required to make renewable energy a national movement where land and connectivity, be it a CTU or an STU, are seen as a national resource.” Further, the sector cannot depend on one procurement model (allocation by SECI) and needs to develop a multi-procurement model including state bids, open access, both intra- and interstate, and meaningful wheeling and banking policies. Lastly, the fate of the sector will directly depend on how efficiently the discom woes are addressed by policymakers. 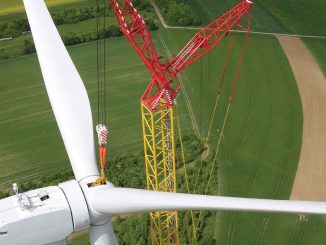 September 2018
Introduced in 2017, competitive bidding for wind power projects has yielded several positives. The bidding mechanism has created a more transparent an...
More