Odisha expects to generate 29,972 MUs during 2019-20 as against its projected power demand for 34,174 MUs. As a result, the state will have an estimated power deficit of 12.3 per cent. During the period 2018-19, Odisha met its energy demand largely through internal supply, facing a deficit of only about 0.1 per cent. However, electricity demand in the state has been increasing. Thus, the state is working towards meeting the demand through clean energy produced using renewable sources, particularly solar energy. Currently, the total installed power generation capacity in Odisha is 8,566.59 MW, of which renewables account for 521.69 MW, or 6 per cent of the installed base. State agencies such as the Odisha Renewable Energy Development Agency (OREDA) and Green Energy Development Corporation of Odisha Limited (GEDCOL), which is a subsidiary of the Odisha Hydro Power Corporation, are working to add more renewable energy to the power mix.

The state government implemented the Odisha Renewable Energy Policy in 2016 to provide long-term energy and ecological security, encourage public and private investment in renewable energy projects, increase the share of renewable energy in the state’s total installed capacity, and facilitate the development of manufacturing and R&D in the renewable sector. The policy will remain in effect till March 31, 2022. The total capacity addition target over the policy period is 2,750 MW, including 2,200 MW of solar energy, 200 MW of wind energy, 150 MW of small hydro, 180 MW of biomass and 20 MW of waste-to-energy. The incentives envisaged under the policy include the creation of the Odisha Renewable Energy Development Fund (OREDF) to aid the development of renewable energy infrastructure. The state government will provide Rs 2.5 billion over five years for the creation of the OREDF and independent producers will contribute Re 0.05 per unit of renewable energy sold outside the state to this fund. On-grid renewable energy projects involving innovative or new technologies may be given viability gap funding from the OREDF.

The renewable purchase obligations (RPOs) for obligated entities in the state were set by the Odisha Electricity Regulatory Commission (OERC) in 2015. The solar and non-solar RPO targets for 2019-20 were set at 5 per cent each. According to the revised National Tariff Policy notified in January 2016, the RPO percentage will reach 8 per cent for solar and 9 per cent for non-solar power by 2022. However, the state has not been able to meet its RPO so far.

Odisha has around 300 clear sunny days each year and receives an average solar radiation of 5.5 kWh per square metre area with an average capacity utilisation factor ranging from 15 per cent to 17 per cent across districts. This makes it suitable for setting up solar projects. Currently, the state has a total installed solar power generation capacity of 397.84 MW. Solar energy forms about 76 per cent of the state’s total renewable capacity, while the rest is small-hydro and biopower capacity. Although the share of solar is considerably higher than other sources of renewable energy, the state still has a large untapped solar potential.

Under the solar park scheme of the Ministry of New and Renewable Energy (MNRE), 1,000 MW has been allocated to Odisha, to be developed by GEDCOL. The Odisha government has identified seven sites across six districts – Balasore, Keonjhar, Deogarh, Boudh, Kalahandi and Angul. The final project size will be finalised based on technical due diligence under Phase I of the project. The detailed project report (DPR) has been approved by the Central Electricity Authority. It estimates an investment of Rs 3.13 billion for establishing a solar evacuation pooling station for the evacuation of 225 MW at Nildungri and another 55 MW at Manmunda. When the tendering process was at the final stage, Odisha Power Transmission Corporation Limited (OPTCL) requested the MNRE for a 40 per cent grant from the National Clean Energy Fund. However, the MNRE informed that the Green Energy Corridor (GEC) Scheme Phase II has not yet been approved by the central government, and hence rejected OPTCL’s request. Unless 40 per cent of the funding is released, the pooling station at Nildungri and Manmunda will not be commissioned.

NHPC Limited also has plans to develop a 100 MW solar park in Odisha in a phased manner. It floated a tender in April 2019 for the first phase, inviting bids from engineering, procurement and construction contractors for installing a 40 MW grid-connected solar power project in south Odisha’s Ganjam district. The selected bidder will be responsible for the construction of a 132 kV transmission line, evacuation arrangement as well as the operations and maintenance of the plant for 10 years. The Grid Corporation of Odisha (GRIDCO) will be the main offtaker of power from the plant. 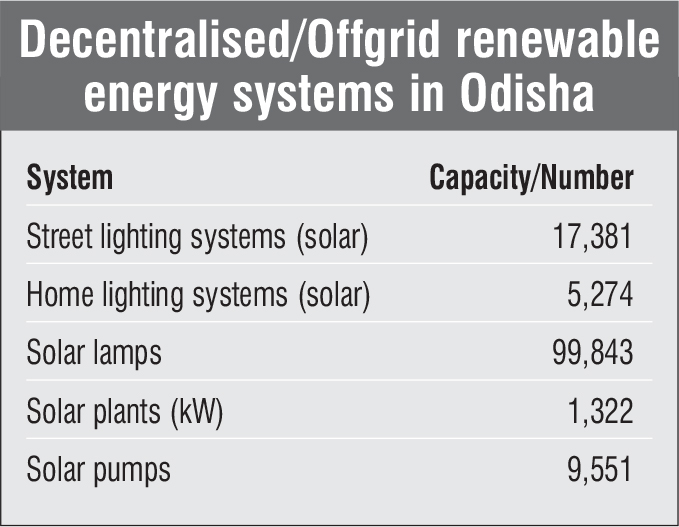 Setting up large solar power projects requires a huge land space. However, land availability is a major constraint in the major cities of Odisha. The declining trend in solar tariff and increasing retail tariffs across the residential, commercial and industrial consumer categories will encourage consumers to install solar systems. This will significantly increase rooftop capacity addition in Odisha in the coming years. The state implemented its net metering policy in 2014. In February 2018, The OERC removed the upper cap of 1 MW for rooftop solar projects in the state as part of its order on net metering, bidirectional metering, and their connectivity to solar PV projects in Odisha. In its order, The OERC recognised that distributed solar generation helps reduce transmission and distribution losses as the generated solar power is consumed locally. Thus, there is an increasing need for new net and bidirectional metering regulations in the state to increase the number of prosumers.

Floating solar power projects are also a solution to constrained land availability. They eliminate the need for land and avoid displacement. Odisha has a huge potential for generating solar power by utilising large waterbodies and reservoirs such as Balimela, Hirakud and Rengali. Besides water reservoirs, seven irrigation projects have been identified for solar power development. However, challenges pertaining to power evacuation and its impact on water  bodies, fisheries and other related matters will have to be addressed. 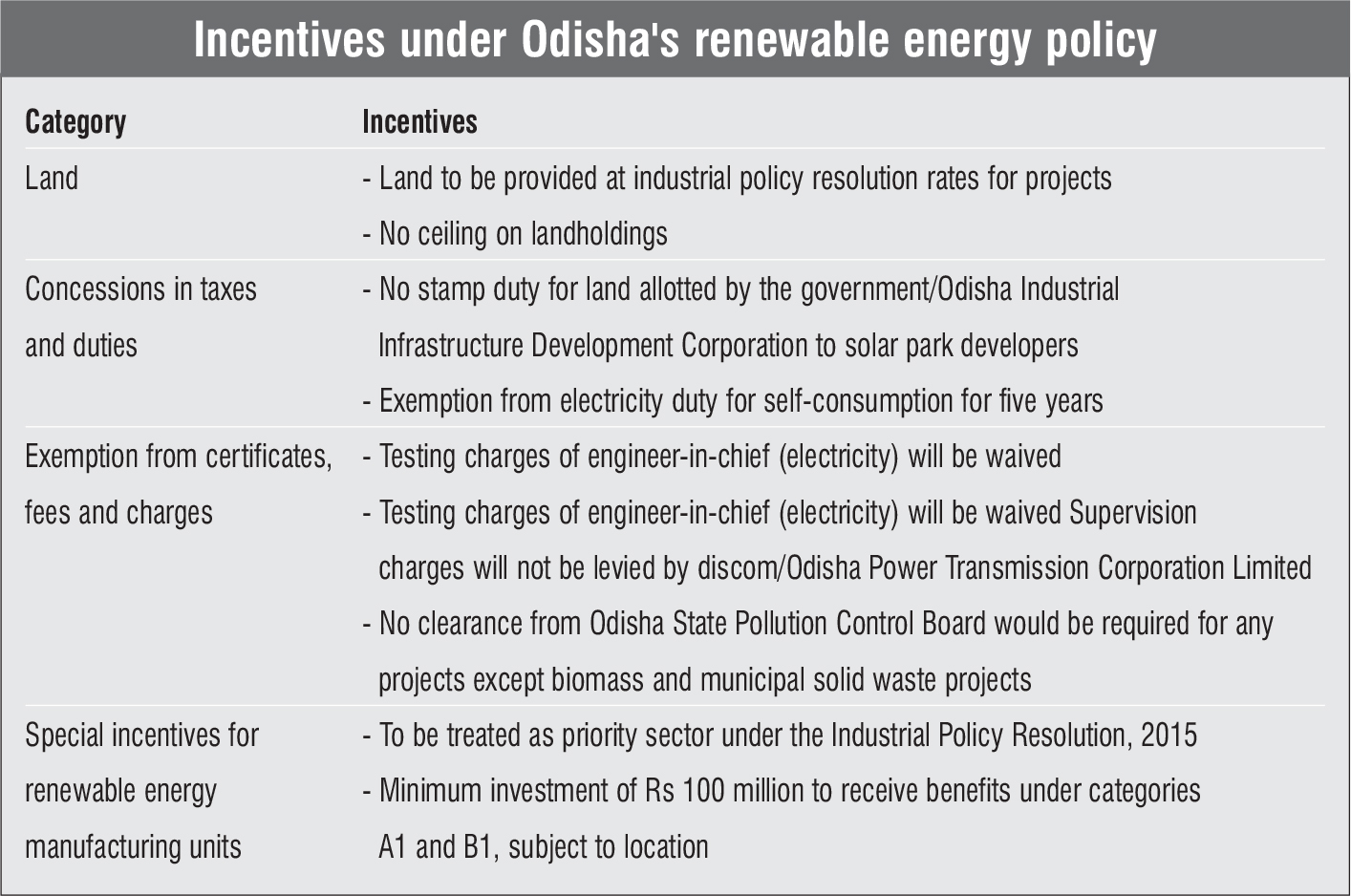 A total of 29 off-grid projects, mainly rooftop solar projects, are expected to be executed in the state during the 2019-20 fiscal to generate green energy. The state government had planned to spend around Rs 1,100 million to generate 9,623 kW of solar energy this year. As per the plan, the government will execute three solar projects at an estimated cost of Rs 205 million for 128 tribal residential schools in the state. The government plans to generate around 1,280 kW of solar power from these projects. Similarly, OREDA is planning to implement rooftop solar projects of different capacities at a cost of Rs 179.5 million at 313 fire stations. Apart from this, it will set up solar projects in 2,000 revenue inspection offices across the state at an investment of Rs 384 million. These projects are expected to generate 5,000 kW of green energy, the highest amongst the planned solar projects in the state. Besides, Rs 10 million will be utilised to generate 200 kW of rooftop solar power at the district headquarter hospitals; Rs 66.1 million for 450 kW of solar power at community health centres and subdivisional hospitals; and Rs 56.7 million for 180 kW solar energy at primary health centres.

The government has also planned to solarise eco-tourism complexes at Satkosia and other eco-tourism sites at an estimated cost of Rs 10.5 million. Another project will be executed at the Hirakud Wildlife Range to generate 10 kW of solar power. Other projects that will be implemented to generate 200 kW of solar power at gram panchayat offices, 250 kW at handloom and handicraft common facility centres, 100 kW at BJB College and 6 kW in two parks managed by the Bhubaneswar Development Authority.

In April 2018, GRIDCO issued Odisha’s first large-scale solar tender for 200 MW. The tender was oversubscribed by almost four times. However, in January 2019, GRIDCO cancelled 125 MW of the 200 MW grid-connected solar projects. GRIDCO then signed a 25-year power purchase agreement with Aditya Birla Renewables to develop the remaining 75 MW. In the auction, Aditya Birla Renewables had quoted Rs 2.79 per kWh to develop 75 MW of solar capacity. Sukhbir Agro bid Rs 3.19 per kWh to develop 25 MW, while Gupta Power quoted the same tariff to develop 20 MW. Eden Renewables quoted Rs 3.19 per kWh to develop 50 MW and ACME Solar quoted a tariff of Rs 3.20 per kWh to develop another 50 MW. As the difference between the lowest tariff bid and the others was more than Re 0.40 per kWh, GRIDCO asked the other bidders to match the lowest tariff of Rs 2.79 per kWh. Despite the plea made by GRIDCO, the bidders denied reducing the tariff rates. This, in turn, led to the cancellation of 125 MW of solar projects.

In October 2019, Aditya Aluminium, a unit of the Aditya Birla Group, set up a 24 MW solar power project at Lapanga in Sambalpur district with an investment of Rs 1.51 billion. The project is spread across 144 acres of land. The power produced is being used by Aditya Aluminium in the aluminium smelting process. The year 2020 has already witnessed some key developments in the segment. In January 2020, NTPC Limited floated a tender for the supply, installation and commissioning of 550 kW of rooftop solar systems at thermal power stations in Odisha. The scope of work includes the supply, installation and commissioning of a 500 kW rooftop solar system at the Talcher super thermal power station in Kaniha and a 50 kW system at the Talcher thermal power station in the Angul district of Odisha. GEDCOL floated a tender in February 2020 for setting up 16.65 MW of grid-connected solar rooftop projects across 17 cities. The cities are Hirakud, Rourkela, Baripada, Burla, Balasore, Sambalpur, Balangir, Bhadrak, Bhubaneswar, Nabrangpur, Jeypore, Koraput, Sunabeda, Brahmapur, Chatrapur, Khurda and Puri. In the same month, OREDA invited interested bidders to install 10 solar cold storage units. In March 2020, Vedanta Limited issued a request for proposal to install 100 MW of solar projects in Jharsuguda district. Vedanta has stated that a tariff cap of Rs 3 per kWh will apply to the project.

The solar energy segment in Odisha faced a huge setback when the central government did not give the go-ahead for the GEC. Odisha has plans to generate 2,200 MW of solar power by 2022 and with the GEC not being approved, the evacuation of solar power will become difficult. Odisha is far behind its 2022 targets. As of February 2020, only 18 per cent of solar power, 43 per cent of small-hydro and 30 per cent of biopower targets have been achieved. Meanwhile, there has been no significant development in the wind power segment. While the state has witnessed significant developments in the renewable energy space over the past two years, these are not enough to meet the targets. Going forward, Odisha has to address any implementation issues that may arise while continuing to add more renewable energy capacity to its energy mix.