At the beginning of 2018, the government indicated that it may set up 10 GW of floating solar capacity by 2021. While considered far too ambitious by industry experts, the initiative was a step in the right direction. Although only a miniscule capacity has been set up so far, floating solar offers an affordable solution to one of the biggest hurdles in solar power development in India, that of land availability. Land acquisition for solar power development is a challenge for developers, often leading to delays in projects due to fragmented land ownerships and complex land transfer regulations. While a MW of ground-mounted solar power development requires 4.5 to 5 acres of vacant land, floating solar projects are set up on water bodies, thereby freeing up developers and governments from the hassles of finding large tracts of uncultivated land. In fact, floating solar project development is particularly feasible in India due to the presence of a large number of lakes, ponds and reservoirs. Even if only the reservoirs of thermal and hydropower plants were used, a huge floating solar capacity of about 628 GW could be installed, according to Renewable Watch Research.

Apart from the obvious benefit of freeing up land for agriculture or housing, another advantage of setting up floating solar projects over reservoirs of thermal and hydropower plants is the optimum utilisation of the existing power evacuation and transmission systems. Thus, the installation time of these projects will be reduced significantly. As it is, floating solar projects have a shorter gestation time and involve an easier execution process than ground-mounted solar projects, as they do not require complex civil work such as land levelling. Studies have shown that an added bonus of installing solar modules on reservoirs is the cooling effect of water which lowers the temperature, improves the energy yield and reduces soiling losses owing to less dust. Thus, in terms of performance, resource utilisation and implementation, floating solar projects has an edge over ground-mounted solar projects. The real challenge, however, is to ascertain whether project costs and tariffs are favourable for the large-scale uptake of floating solar projects.

In fact, in September 2019, a 70 MW tender for a floating solar project on a reservoir of NTPC Limited’s Rajiv Gandhi Combined Cycle Power Project at Kayamkulam in Kerala saw project costs being quoted by developers at as low as Rs 35 per watt. The tender was won by Tata Power Solar. According to industry reports, this is the lowest cost achieved across the world so far. Prior to this, the lone 150 MW Rihand Dam auction conducted in the floating solar space in 2018 saw tariffs of Rs 3.29 per kWh, which is comparable to ground-mounted solar project tariffs in the state. As per the World Bank, the levellised cost of energy is only 3-4 per cent higher than that for a ground-mounted system.

With less than 10 MW of installed capacity in India as of March 2019, the target of bringing 10 GW of floating solar projects online seems far-fetched. About 1,721 MW of floating solar projects are at various stages of development, indicating the huge appetite for such projects. Some important projects installed in the floating solar space include a 2 MW project on the Mudasarlova reservoir in Visakhapatnam, a 500 kWp project on the Banasura Sagar reservoir in Wayanad and a 100 kWp project at Kayamkulam in Kerala.

The segment is gradually advancing on the back of an increase in the number of recent tenders. With water reservoirs at its thermal power plants serving as ready locations for floating solar panels, NTPC aims to take the lead in the floating solar space. Apart from the 70 MW project at Kayamkulam, a 22 MW project is being constructed at the same plant by Bharat Heavy Electricals Limited. In addition, NTPC is installing a 20 MW project at Auraiya in Uttar Pradesh, a 15 MW project at Koldam in Himachal Pradesh and a 25 MW project at Simhadri in Andhra Pradesh, among others. Like NTPC, the West Bengal Power Development Corporation Limited has issued a tender for setting up of a 10 MW floating solar plant at Sagardighi Thermal Power Project.

While most floating solar projects are being tendered for engineering, procurement and construction (EPC), tariff-based competitive bidding is also gaining traction in this space. After the successful Rihand Dam auction, the Solar Energy Corporation of India (SECI) issued a tender for setting up 4 MW of grid-connected floating solar projects with a 2 MW battery energy storage system in Andaman with a tariff cap of Rs 8 per kWh in January 2020. The projects will be developed on a build-own-operate (BOO) basis at Kalpong Dam in Diglipur, located in northern Andaman. Apart from the 4 MW project in Andaman, SECI is developing 20 MW of floating solar PV projects equipped with 60 MW BESS on eight islands of Lakshadweep. In addition to this, in August 2019, the Bihar Renewable Energy Development Agency invited two bids of 2 MW each for developing grid-connected floating solar power projects on a BOO basis. While one project of up to 2 MW will be developed on private water bodies, another 2 MW would be developed on a government-owned water body in the state’s Darbhanga district. Ports are also making a foray in this segment. In November 2019, the Cochin Port Trust invited EPC bids for both rooftop and floating solar power projects. Initially, around 14 blocks of a residential building with flat roofs will be made available in Kochi for the projects along with about 4 km of surrounding water bodies. In October 2019, the Jawaharlal Nehru Port Trust invited bidders to provide quotations for carrying out a detailed survey for an upcoming floating solar project on its premises. 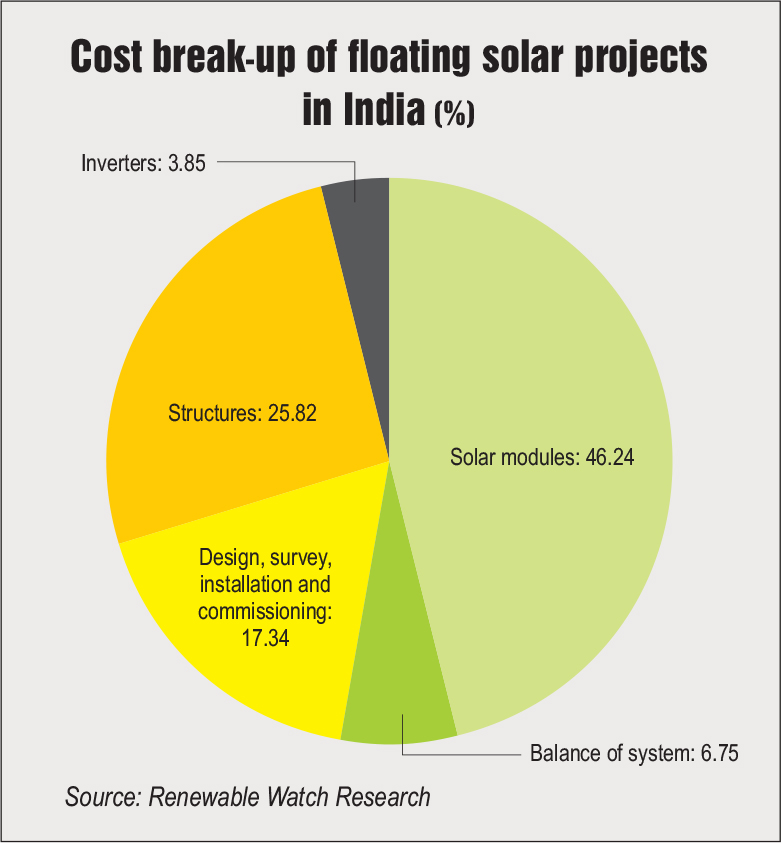 Among the states, Madhya Pradesh is expected to witness a large capacity of floating solar project installation in the coming months. In July 2019, NHDC Limited invited bids for the selection of an EPC contractor for the development of a 25 MW project at the Omkareshwar reservoir in Khandwa district. The Indore Municipal Corporation (IMC) plans to install two 50 MW floating solar farms to power a water pumping station and reduce its electricity bill. The plants would be installed at Jalood and Yeshwant Sagar and help lower the cost of bringing water from Jalood to the city. According to media reports, IMC would look to raise Rs 5 billion through the issuance of masala bonds to finance the projects. The state government also plans to construct a 1 GW floating solar array, which would be the world’s largest, on the Indira Sagar Dam. It is expected to cost $700 million.

The increased interest in these projects has already started attracting development agencies and investors to India. As part of its Clean Technology Fund, the World Bank is supporting the development of 10 MW of floating solar projects in India. KfW, the German development bank, is funding the installation of two floating solar projects with a total capacity of 40 MW to demonstrate the technical feasibility and assess the potential and economic feasibility of such projects. Apart from investors, float manufacturers such as Ciel Et Terre and Yellow Tropus are setting up base in the country. This is expected to give a boost to the domestic manufacturing of floats, which, at present, are mostly imported from China and Europe.

Since the segment is at a nascent stage, floating solar projects have higher capital, and operations and maintenance costs at present. The absence of required bathymetric and hydrographic data is another issue. However, these challenges are quite insignificant when compared to the various benefits that floating solar technology offers. It is expected that with an increase in the scale and size of projects, the costs would decrease. This would give a boost to domestic manufacturing of floats and reduce imports. In sum, although the market size for floating solar projects is quite small, this segment holds potential due to favourable market dynamics. Further, synergies with hydropower and thermal plants, the decreasing availability of land, and expected cost viability would drive growth in this segment.