Over three months back, Triloki Nath Sharma got a 5 kW grid-connected rooftop solar system installed at his house in a residential colony in Shimla. In the third week of December 2019, his meter showed that he already had nearly 1,100 units of power to his credit. Of over 1,600 units of total electricity generated, the family has consumed just about 500 units. Sharma said that in addition to the central and state subsidies, he has spent around Rs 70,000 on the installation. The system has been working well he said and he is happy that he took the decision to invest in solar power.

Another resident of Shimla, Shashi Kant Sharma also installed a 5 kWp rooftop solar system less than six months back. He has to his credit over 3,700 units of electricity. He says that 25-30 units of solar power are generated every day on average. “Since it is pretty cold in Shimla these days, I will consume these units for running room heaters,” he says. Sharma is the director of Gold Cube Automation and Energy, a company that has installed 35 rooftop solar plants in Himachal Pradesh sanctioned by Himurja. Sharma says that since 8 MW of capacity was sanctioned for rooftops in Himachal Pradesh, he had to refund the money back to 15 applicants that had made bookings for rooftop solar plants. 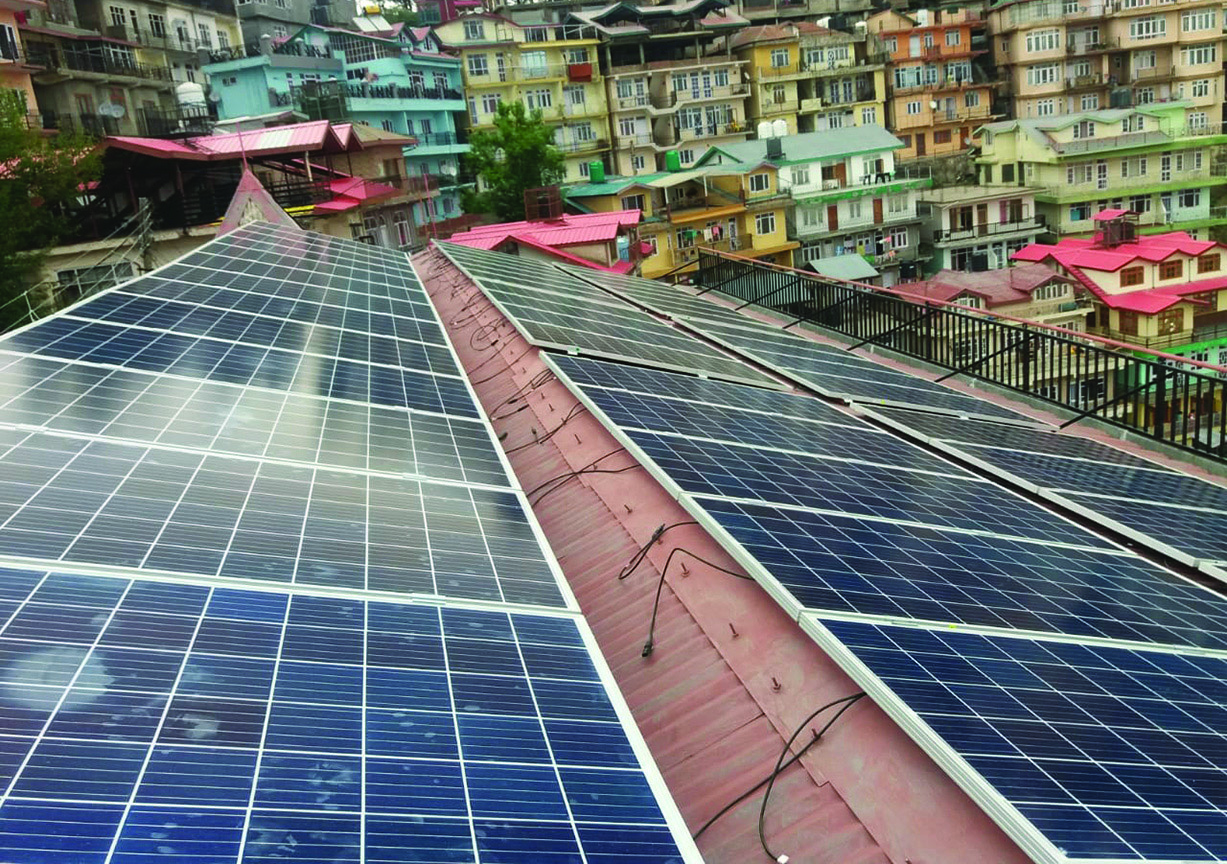 Baldev Raj from Sarkaghat in Mandi district has installed a 2 kW system. Over the past four months, an average of 10 units of solar power has been generated per day. Since the consumption in his household is not much, he has been able to export 500 units to the state electricity board (SEB) during the period. Baldev Raj says he spent Rs 28,000 from his pocket including Rs 4,000 for the meter. The rest was taken care of by subsidies. Mandi and Una are among the districts where rooftop solar systems have received an overwhelming response as people use air conditioners to beat the heat in summers.

Over 1,300 households and institutions in Himachal Pradesh installed solar systems ranging from 2 kW to 7 kW in less than a year. In 2016, the centre sanctioned 10 MW of rooftop solar plants for residential, social and institutional buildings, but due to lack of response only 2 MW of solar plants were installed. In 2018, Himurja, the agency for the promotion of renewable energy programmes in the state, demanded 8 MW. With aggressive campaigns to promote rooftop solar systems in the state, Himurja director K.L. Thakur says that they were able to achieve the target of installing 8 MW of rooftop solar systems months before the stipulated timeline.

Solar fairs were held in all districts, the major ones were in Shimla and Mandi where on-the-spot no objection certificates were given by Himachal Pradesh State Electricity Board Limited. These fairs received a positive response. The vendors with their proactive approach played a key role in this. The good experience of individuals and institutions too helped in attracting more applicants to invest in solar power in a state blessed with abundant sunshine.

In Shimla, nearly 100 rooftop solar systems were installed last year. More or less all households have units to their credit and they do not have to pay for the power consumed by them for now. The exported units will be adjusted, say SEB officials. 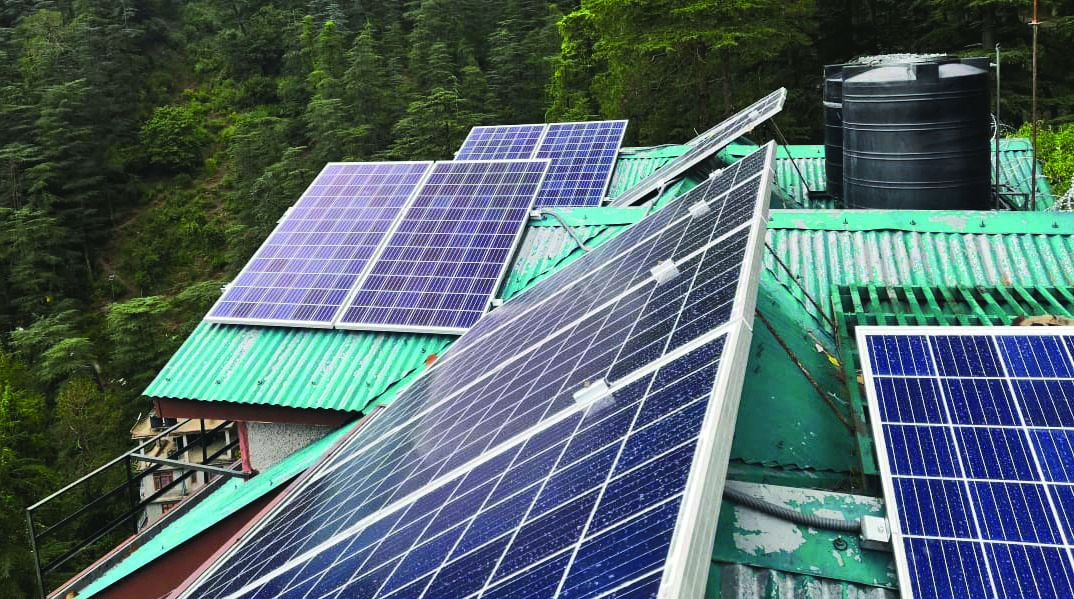 DAV Public School in New Shimla, one of the colonies of the capital town of Shimla, used to get a bill of Rs 18,000-Rs 20,000 per month. With the installation of a 20 kWp rooftop plant a year back, the monthly bill has come down to Rs 4,000 and a maximum of Rs 6,000, says the school principal Rakesh Chandel. The senior secondary school has 20 rooms in addition to the administrative block, laboratories and library, etc. There are two hostels, one each for boys and girls, with a total capacity of 90 students. The electricity consumed is mainly for lighting, and running computers, labs and auditorium and room heaters during winters. It is also used during school functions that take place from time to time. Another prestigious school of Shimla, Loreto Convent Tara Hall installed three plants of 9.3 kWp in June last year. Since the school happens to be in a sunny area, nearly 150 units of solar power is generated every day, according to the installer. The electricity bill of the school that used to come to over Rs 20,000 has reduced to about Rs 100 a month.

The ones in Shimla include a combined capacity plant of 500 kWp that was installed in Himachal Pradesh University with four plants of 40 kWp each, five of 40 kWp, four of 30 kWp and one of 20 kWp, bringing down the electricity bill by 35-40 per cent. Work is also under way on other government buildings. The Shimla railway station also installed a 160 kWp rooftop solar plant last year. The central government subsidy for plants sanctioned in 2018 was 70 per cent of the cost, the state government provided the remaining Rs 4,000 per kW.

In view of the overwhelming response to rooftop solar systems, with most households exporting electricity to the SEB and institutions experiencing a reduction in electricity bills, this time Himurja has demanded an allocation of 10 MW for rooftop solar installations in the state.  Himurja has also been tasked to install 1-3 kWp off-grid rooftop solar systems at 298 government middle schools that do not have electricity. These schools are located in the difficult and interior regions of Himachal Pradesh, and many of them are not accessible by road. The State Education Department has given Himurja Rs 110 million for this purpose. Three firms have been allocated schools across the state to complete installations by March 31, 2020. According to Thakur, the basic requirement of lighting and running computers will be met through solar power. 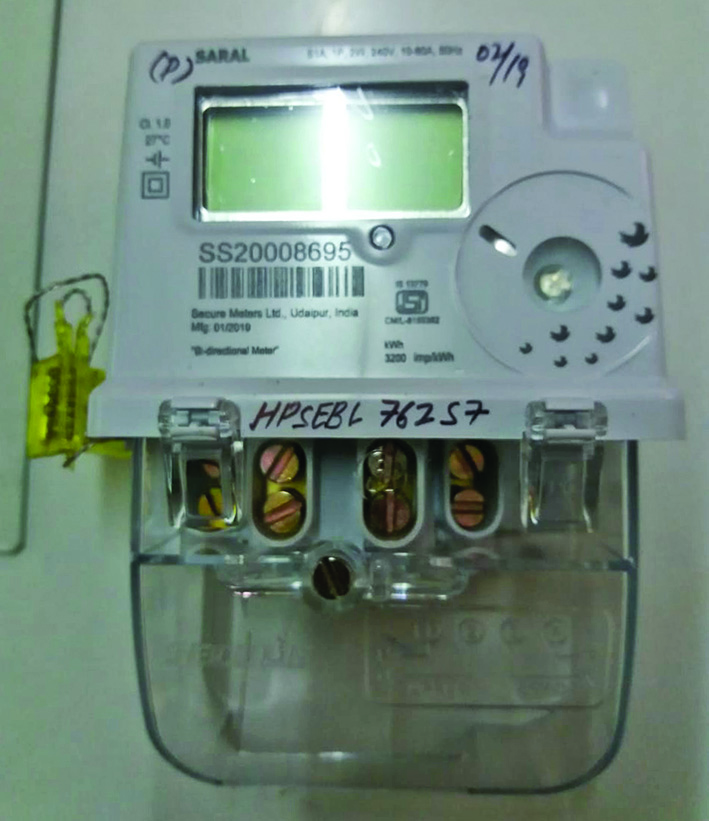 Colonel B.D. Sangal’s Communication Systems and Engineering Private Limited has been assigned to install these off-grid solar systems in 50 per cent of these schools spread over the districts of Shimla, Kangra, Hamirpur, Mandi, Solan, Kullu and Kaza. Most of these schools, says Sangal, can be accessed only by foot. He says if access to some of these schools in snow-bound areas is possible and weather permitting, his company will try its best to complete all the installations allocated to it before the stipulated time.

The hill state of Himachal Pradesh is blessed with abundant sunshine and as the word spreads about the profitable experience of rooftop solar, an increasing number of people are going for solar power. The response is expected to be good in the coming year as well.