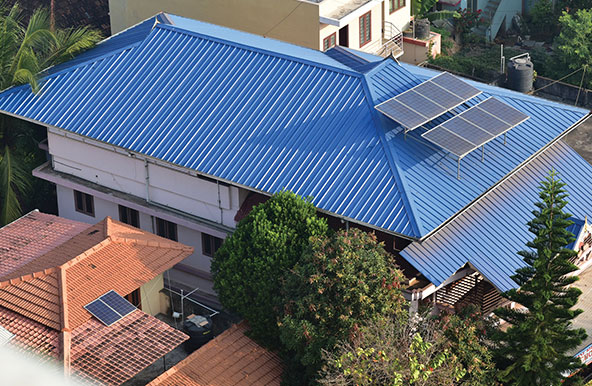 NTPC Limited has floated a tender for the supply, installation, and commissioning of 550 kW of rooftop solar systems to be set up at thermal power stations in the state of Odisha. The scope of work includes supplying, installing, and commissioning a 500 kW rooftop solar system at the Talcher Super Thermal Power Station in Kaniha and a 50 kW system at the Talcher Thermal Power Station in Angul district of Odisha. The bidders are also expected to provide operations and maintenance services for these systems for five years. The last date for the submission of bids is January 21, 2020.

NTPC Limited is one of India’s largest power producers. It has set a target to diversify its fuel mix, in line with the country’s clean energy generation targets. By 2032, non-fossil fuel-based generation capacity will make up nearly 30 per cent of NTPC’s portfolio.

The company had a very successful year in terms of tendering and winning wind and solar power projects. In June 2019, it won 40 MW of capacity under the Uttar Pradesh New and Renewable Energy Development Agency’s (UPNEDA) 500 MW solar tender at a tariff of Rs 3.02 per unit. The lowest tariff quoted in this auction is the same as the tariff quoted in UPNEDA’s auction for 550 MW of projects by NTPC. Under the previous auction, which was concluded in December 2018, NTPC won 85 MW of capacity. Besides, in May 2019, NTPC secured 100 MW of solar capacity under SECI’s 250 MW grid-connected solar projects tender for the Dondaicha solar park, Maharashtra.

NTPC has been tendering a number of solar and floating PV projects as part of its mandate to promote solar power. In November 2018, NTPC Limited issued an LoA to Azure Power India Private Limited for the installation of 300 MW of solar capacity under the tender for 2,000 MW of ISTS-connected solar projects. The proposed projects are expected to be commissioned by early 2021. It also tendered a 25 MW floating solar PV project in Simhadri, Andhra Pradesh, and a 100 MW floating solar project at the Ramagundam power station located in Peddapalli district of Telangana.

NTPC Limited has been active in the EV charging infrastructure space too. In March 2019, it invited bids for setting up charging stations for EVs, including buses and four-wheelers, on a turnkey basis. In January 2019, the Goa government signed an agreement with NTPC for assistance in procuring 100 electric buses and setting up charging stations. In November 2018, NTPC signed MoUs with vehicle aggregators Ola, Lithium, Shuttl, Bikxie, Bounce, Electrie and Zoom Car for the development and utilisation of public charging infrastructure in the cities of Jabalpur, Navi Mumbai and Bhopal.