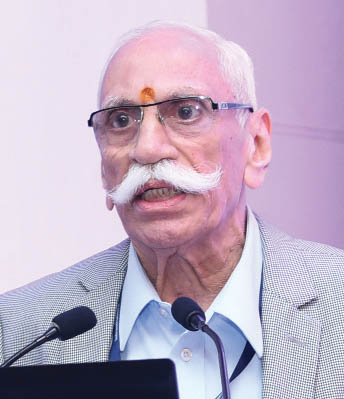 The introduction of competitive bidding for domestic wind power projects has led to upheaval in the industry. On the one hand, manufacturers are struggling to stay afloat in the face of restricted sales volumes and declining tariffs. On the other hand, issues like land constraints and transmission delays have slowed down segment growth. At the recent “Wind Power in India” conference organised by Renewable Watch, D.V. Giri, secretary-general, Indian Wind Turbine Manufacturers Association (IWTMA), spoke about the emerging trends in the Indian wind power manufacturing space, the current challenges, the solutions and the future outlook. Excerpts…

India’s wind power industry has evolved at a fast pace. Wind turbine size has increased from 250 kW in the initial years to almost 3 MW at present. Various technology advancements are happening at a rapid pace, and Indian original equipment manufacturers (OEMs) are able to bring in as many models as needed to cater to the industry requirements while ensuring high plant load factors and low energy costs. There are over six wind power research and development centres in the country and the industry already manufactures products based on advanced technologies like gearless turbines. India has 18 wind turbine manufacturers with a total production capacity of about 13.5 GW per annum as of today. Domestic manufacturers can easily scale up the production capacity to 16-17 GW per annum provided there is an increase in market demand.

However, OEMs are facing many challenges. At present, the industry is chasing only about 2 GW of wind capacity per annum, with 1.7 GW of installations in 2017-18 and 1.4 GW in 2018-19. Due to land issues in Gujarat and other issues in some states, new capacity additions in 2019-20 may go up to only 2.5 GW. The Ministry of New and Renewable Energy (MNRE) plans to auction 10 GW per annum. So, if 10 GW of wind capacity is tendered every year and 10 GW is implemented on the ground, only 3.5 GW has to be exported. In reality, 13,290 MW of wind power capacity has been auctioned so far while roughly 1 GW has been implemented. Thus, there is a significant gap between the auctioned and executed capacity, which creates major issues for OEMs. While a bidder faces losses due to project delays on account of land or connectivity issues, the OEM also faces the brunt of this as it has to stock inventory for a prolonged duration and suffer revenue losses. Despite these losses, OEMs have managed to sustain themselves and will continue to exist and thrive if the market improves.

To tackle the issues faced by OEMs and developers in the wind power industry, the country needs a multi-procurement model, instead of depending only on auctions conducted by the Solar Energy Corporation of India (SECI). For instance, there can be a special dispensation for projects with capacities below 25 MW, which is the threshold capacity for state projects. The threshold capacity for SECI projects is 50 MW. To this end, the MNRE has requested various states to come up with different tariff calculation mechanisms and ensure a regulated wind power tariff. However, this has not generated the expected interest as mega auctions have resulted in very low tariffs. Thus, no state discom would be willing to purchase power at high prices. Irrespective of the procurement model, wind power auctions need to be conducted in all the states. It was, in fact, made quite clear initially that projects set up under SECI bids will sell power to the non-windy states. However, in reality, Maharashtra and Madhya Pradesh have already signed contracts of 800 MW-900 MW. So if these states are purchasing power from SECI at extremely low tariffs, no new projects are going to come up in these states owing to higher tariffs.

The first 20 GW of wind power capacity in India was developed by individual asset owners. In states like Tamil Nadu, industrial units used to prefer wind energy to reduce their power costs. However, the tables have turned, and there is no place for small players in today’s wind power industry. Another issue relates to open access. If the regulatory constraints and discom reluctance for open access projects are eliminated, the dependence on SECI auctions can be reduced. Uncertainty in wheeling and banking regulations is also a challenge for the segment. For instance, Tamil Nadu reduced the energy banking period in the state to just one month, without warning, thereby adversely affecting the captive power producers in the state. However, there have been certain positive developments as well. The government is considering the removal of upper caps on tariffs in tenders as this is unlikely to result in any substantial increase in tariffs. The government is also promoting the repowering of old wind power assets as the best wind sites are occupied by first-generation lower capacity machines. However, this entire exercise of replacing older machines with newer ones is a Herculean task not only for the existing owners but also for discoms and the government. Certain incentives would be needed to promote repowering along with the development of innovative cooperative business models.

The government is also making efforts to promote the offshore wind segment and aims to achieve 5 GW of offshore wind capacity by 2022. An expression of interest for 1 GW of project capacity in Gujarat has already been floated, and the state authorities have expressed their willingness to buy this power at Rs 3.89 per unit. However, offshore wind projects are more expensive than onshore wind and Rs 3.89 per unit seems unviable. To this end, the MNRE is already in discussions with the Ministry of Power and the Ministry of Finance to explore the possibility of viability gap funding to support the project. India is still taking baby steps in this space, and 5 GW of offshore wind capacity seems unlikely by 2022.

As far as exports are concerned, Indian technology can compete in any corner of the world. In fact, due to a dearth of capacity in domestic markets, there has been a significant increase in export values since the advent of competitive bidding in India. The country has one of the lowest wind power costs worldwide making it ideal not only for domestic use but also for export. The wind power industry is perhaps the only space in India with over 80 per cent of localised manufacturing for various components. The government is striving for 95 per cent local content in manufacturing. However, OEMs might have a different perspective as the wind power market in India has shrunk with restricted sales volumes. Component manufacturers might want more incentives to set up production capacities for items that are currently being imported. To this end, the IWTMA has given a letter to the government to increase the incentives from the current 3 per cent to 10 per cent, so as to promote exports.

India has the potential to become a global wind power manufacturing hub. However, the creation of the required demand is of vital importance at present. Demand creation can be enabled through an enforceable mechanism of renewable purchase obligation (RPO) compliance. This is not happening at present as states are allowed to carry forward their RPOs therefore, they have not been able to create enough demand. Thus, OEMs are totally dependent on the wind power capacity auctioned by SECI. Challenges like land allocation issues in Gujarat, tariff renegotiation in Andhra Pradesh and delayed payments in Tamil Nadu have also cropped up, further hampering growth. The outlook for the segment is still quite positive and everybody needs to consider the environmental benefits apart from the low prices.

To conclude, all stakeholders in the Indian wind industry need to tackle the issues together, and not act individually as OEMs, or developers, or investors, so as to ensure sustained growth of the wind power segment.

“All stakeholders in the Indian wind industry need to tackle the issues together, and not act individually as OEMs or developers or investors, so as to ensure sustained growth of the wind power segment.”

“India has the potential to become a global wind power manufacturing hub.”