Wind power development started in India in the mid-1990s, nearly twenty-five years ago. Since then, the country has seen rapid growth in this segment. It currently has about 35 GW of installed capacity and ranks fourth in global wind capacity  installations. According to estimates, many of these projects are located in high-wind sites, with wind turbine generators (WTGs) of capacities lower than 500 kW and hub heights of not more than 30 metres. Hence, the energy generation at these wind farms is much lower than that possible at the same sites using modern higher capacity turbines.

The process of replacing older wind turbines with newer ones that have a higher rated power capacity and greater efficiency – thus leading to higher generation – is called repowering. A recent report, “Repowering of Old Wind Turbines in India”, published by Idam Infrastructure Advisory Private Limited, explores the market potential for repowering in India. It discusses key challenges and possible technology options for utilising this potential. The study also proposes a holistic business model along with recommendations for the government for implementing a repowering programme. It was commissioned by the Indo-German Energy Forum (IGEF) Support Office, and supported by the Ministry of New and Renewable Energy (MNRE) and the Federal Ministry for Economic Affairs and Energy of Germany. A look at the key highlights of the study…

The standard commercially available WTGs at present have a capacity rating of 2 MW to 3 MW, with hub heights going beyond 100 metres. Ten years back, the turbine capacity rating was 500 kW and 15 years back it was just 150 kW. Most of these old turbines are located in the best wind energy sites of the country, with many still in operation. In fact, about 19,500 old wind turbines, with less than 1 MW capacity rating each, that are installed in the country have a total repowering potential of 10.5 GW. Also, 10 per cent of the total installations have less than 500 kW capacity rating each, totalling around 2.5 GW. This signifies that India has a vast repowering potential. Notably, repowering can increase the plant load factor (PLF) from 10-14 per cent to 25 per cent, thus almost quadrupling the energy generation at these sites.

The study considers the WTGs installed during the period 2002 to 2012 to determine the market potential for repowering in each state for the period 2017 to 2027. To this end, the turbine size, the commissioning date, the average PLF and the wind resource assessment at the location of all the WTGs were taken into account. The analysis considered the operational life of a wind turbine to be 15 years. Based on this, Tamil Nadu, Gujarat and Maharashtra emerged as the states with the largest potential for repowering in India.

There are several administrative, technical and contractual challenges in the large-scale implementation of a repowering programme. These include the complications arising due to the existence of multiple landowners, which leads to delays in obtaining clearances. Moreover, in India, unlike in Germany and Denmark, multiple parties typically own a wind farm. This poses a challenge as all parties may not agree to repowering due to different shares in income and expenditure. Many stakeholders feel that the percentage share that an owner has in a wind farm should be the criterion for determining the share in capital investments and revenues in the event of repowering.

Further, the earlier power offtake arrangements with a discom or a private player may have to be cancelled or renegotiated. This may lead to additional complications in tariff negotiation and determination of new power offtake conditions for increased energy generation. For instance, discoms might not be willing to sign fresh power purchase agreements (PPAs) or the additional capacity may not find any off-takers. Stakeholders, therefore, feel there is a need for incentives in the form of generation-based incentives or additional feed-in tariffs to encourage repowering.

The issue of micrositing without dismantling the older turbines in the wind farm may also pose a huge problem. This is because the majority of the older 11 kV evacuation systems will have to be upgraded to the 33 kV or 66 kV level. Hence, accurate planning will be necessary for the removal of older turbines, as this will help reduce significant loss in power generation for a longer duration. 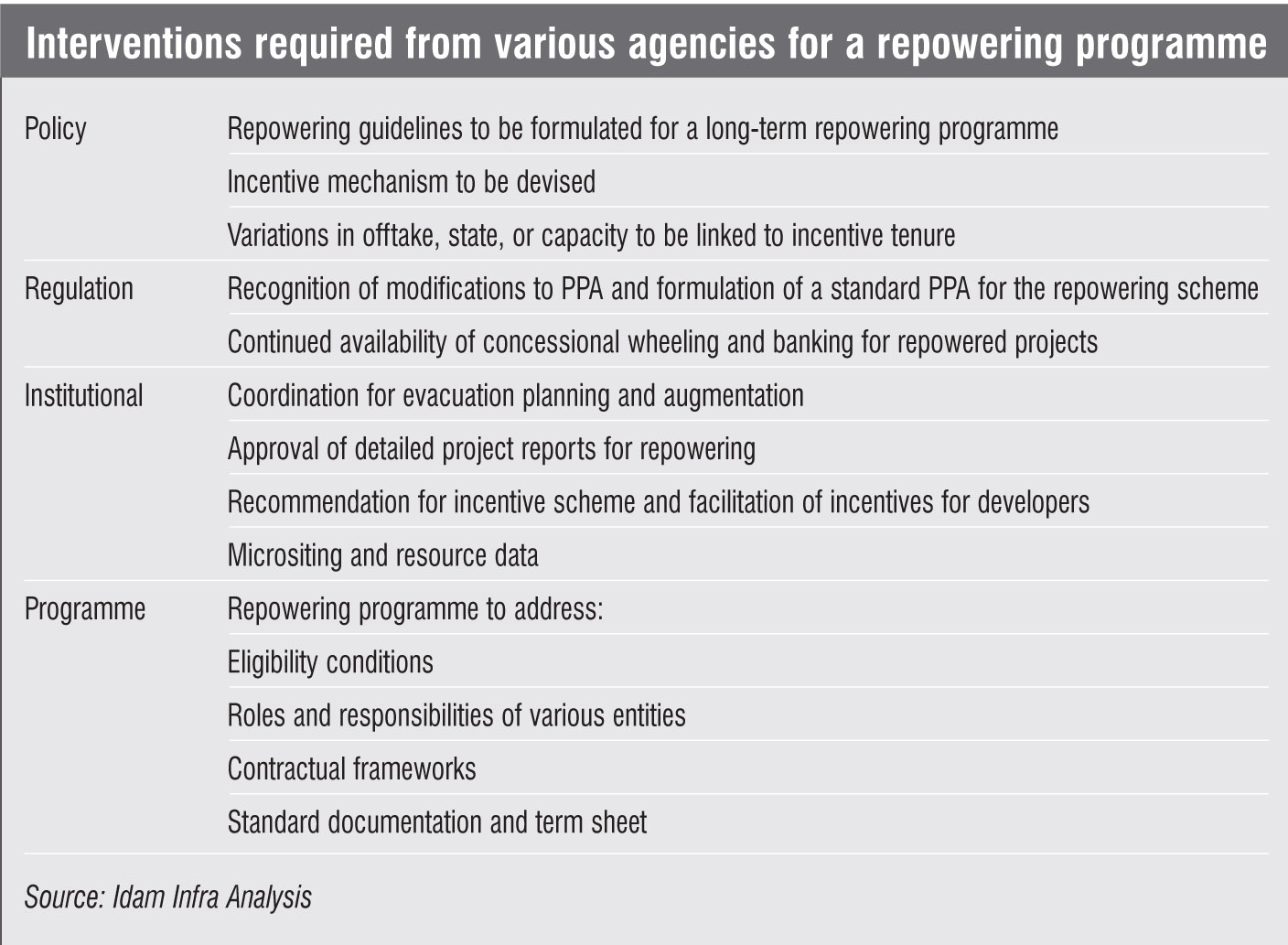 To address some of these challenges and promote repowering, the MNRE notified the Policy for Repowering of Wind Power Projects in August 2016. Following suit, Gujarat released the Gujarat Repowering of Wind Projects Policy in May 2018. However, repowering of wind projects is still at a nascent stage in India. A suitable business model that safeguards the interests of all stakeholders is needed to tackle the challenges and instil confidence in all the parties involved.

Repowering can be carried out in different ways including one-to-one replacement, clustering and two-to-one replacement. The clustering approach is considered most feasible as it allows stand-alone low capacity turbines at multiple locations in a wind farm to be replaced by a fewer number of higher capacity turbines. In such a set-up, the ideal business model would include a wind repowering project implementer (WRPI) as the primary owner of the project with equity contribution from each interested party (similar to a special purpose vehicle). The WRPI would procure all the existing wind turbines and land use rights. Any prior agreement with the discoms would be honoured for the balance tenure of the PPA, while ensuring government support in the form of incentives to make the project financially feasible. This incentive, required by the developers in addition to the existing power purchase tariff, would be determined on a case-by-case basis through a transparent competitive process with a ceiling tariff. The study suggests that the MNRE could issue guidelines for repowering projects to clarify these processes. 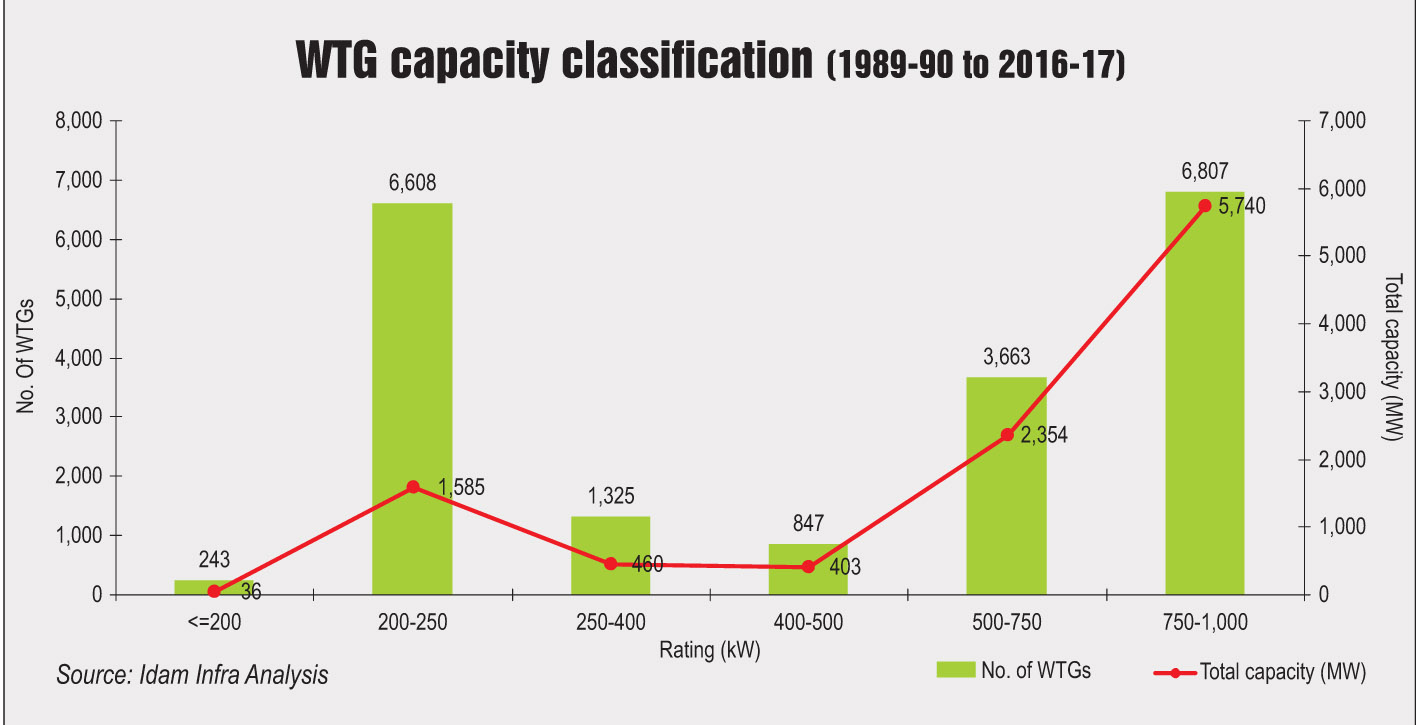 India plans to install 175 GW of renewable energy capacity by 2022, of which 60 GW will come from wind. The country has limited high-wind sites and these may soon get exhausted. Moreover, the present issues related to transmission inadequacy and resistance by certain state authorities to allocate land are also posing challenges in the timely implementation of greenfield wind power projects. In such a scenario, repowering of older low capacity turbines with newer high capacity ones is an ideal approach to increase the country’s wind energy portfolio. With roughly 10.5 GW of repowering potential for WTGs of less than 1 MW capacity, along with the greenfield projects in the pipeline, the country will be on track to meet its target in time.

Even with the various implementation challenges and a lack of incentives, repowering is an attractive option to utilise the country’s vast wind potential. Owners of stand-alone wind turbines can be brought together through supportive business models that protect the interests of generators, discoms and consumers alike. Going forward, significant government interventions in the form of enabling policies and regulations, including certain incentives at the initial stages, are required to accelerate the process of repowering.

Based on the report, “Repowering of Old Wind Turbines in India”, by Idam Infrastructure Advisory Private Limited