The demand for clean energy in several states of the US continues to present an economic opportunity for Canada to boost its electricity exports. Canada is already a net exporter of electricity to the, US. Between 2007 and 2016, Canada’s net exports to the US grew twofold to stand at 63.8 TWh, recording a net revenue of CAD 2.7 billion in 2016. Further, these exports are projected to grow threefold between 2020 and 2030. Canada has almost three dozen electricity interties with its southern neighbour. These interconnections are expected to increase as several new transmission projects are under development to transfer clean hydro or wind energy from Canada to the US.

Several US states have established strict renewable portfolio standards (RPS), which require utilities to procure or sell a percentage of their electricity from renewable sources. Washington DC 29 states and nine territories have adopted RPS while eight states have set renewable goals or targets. Almost all the states bordering Canada have RPS or renewable energy goals in place. Further, many states plan to shut down their nuclear and coal-based power generation plants over the next five years despite the Trump administration’s relentless promises to support coal. To leverage this opportunity, Canada’s traditional utilities and new wind energy developers are planning to send more hydro and wind energy to the US, and transmission developers in the US have drafted projects to facilitate this.

At least 10 such projects have been proposed. Some have made steady progress while others have hit severe roadblocks. Most of these are classified as “merchant transmission” projects and are being developed by private investors seeking negotiated rates for securing transmission capacity on their lines. Of these 10 projects, five have received presidential permits, which are required for the construction, operations, maintenance and connection of electric transmission facilities at the US border. These are the Champlain-Hudson Power Express, the ITC Lake Erie Connector, the Great Northern Transmission Line, the New England Clean Power Link (NECPL) and the Northern Pass. While the first four projects have made progress, the Northern Pass faced a major setback recently when the regulators in New Hampshire (from where the line was proposed to pass) rejected the project.

The other five projects seeking to bring Canadian clean energy to the US are the New England Clean Energy Connect (NECEC), the Atlantic Link, the Granite State Power Link (GSPL), the Maine Green Line Project and the Maine Power Express. Of these, the first three have already applied for presidential permits.

The developers of six projects of the 10 total projects, submitted their proposals in June 2017 in response to Massachusetts’ clean energy request for proposal (RfP) directing local utilities to seek 9.45 TWh of clean energy annually through long-term contracts. These six proposals were for Northern Pass, NECEC, NECPL, the Atlantic Link, GSPL and the Maine Power Express. In January 2018, Northern Pass was selected. However, in February 2018, the project, which had long been facing severe opposition on environmental grounds, received a major setback when the New Hampshire Site Evaluation Committee rejected the project application. Following this, the Massachusetts Department of Energy Resources also withdrew its support from the project and announced that it would go ahead with the NECEC project.

Renewable Watch presents a brief update on the proposals…

NECEC: The $950 million project was proposed by Central Maine Power (CMP), a subsidiary of Avangrid, in response to Massachusetts’ 2017 clean energy RfP. CMP proposed the  project in a joint bid with Hydro-Québec to deliver renewable energy from Québec to the New England grid. The proposed project will provide a new link through a ±320 kV high voltage direct current (HVDC) transmission line stretching 234 km from the Canadian border in western Somerset County to a new converter station in Lewiston, Maine. The construction of a new line, along with small improvements at various facilities in Maine, will create capacity to deliver up to 1,200 MW of power from Hydro-Québec’s power plants to Massachusetts. The NECEC is scheduled to be operational by 2022. As stated above, NECEC was recently selected over Northern Pass by Massachusetts’ regulators to fulfil the state’s clean energy mandates.

Northern Pass: Proposed in 2010, Eversource Energy’s Northern Pass project comprises 309 km of transmission lines from Pittsburgh to Deerfield in New England, carrying electricity from Canada’s Hydro-Québec system to the southern New England markets. The project includes HVDC underground cables and alternating current (AC) overhead lines. While the developer was successful in securing the presidential permit, the project was denied siting clearance by the New Hampshire regulators. Eversource has stated that it will continue to review all options for taking this project forward. 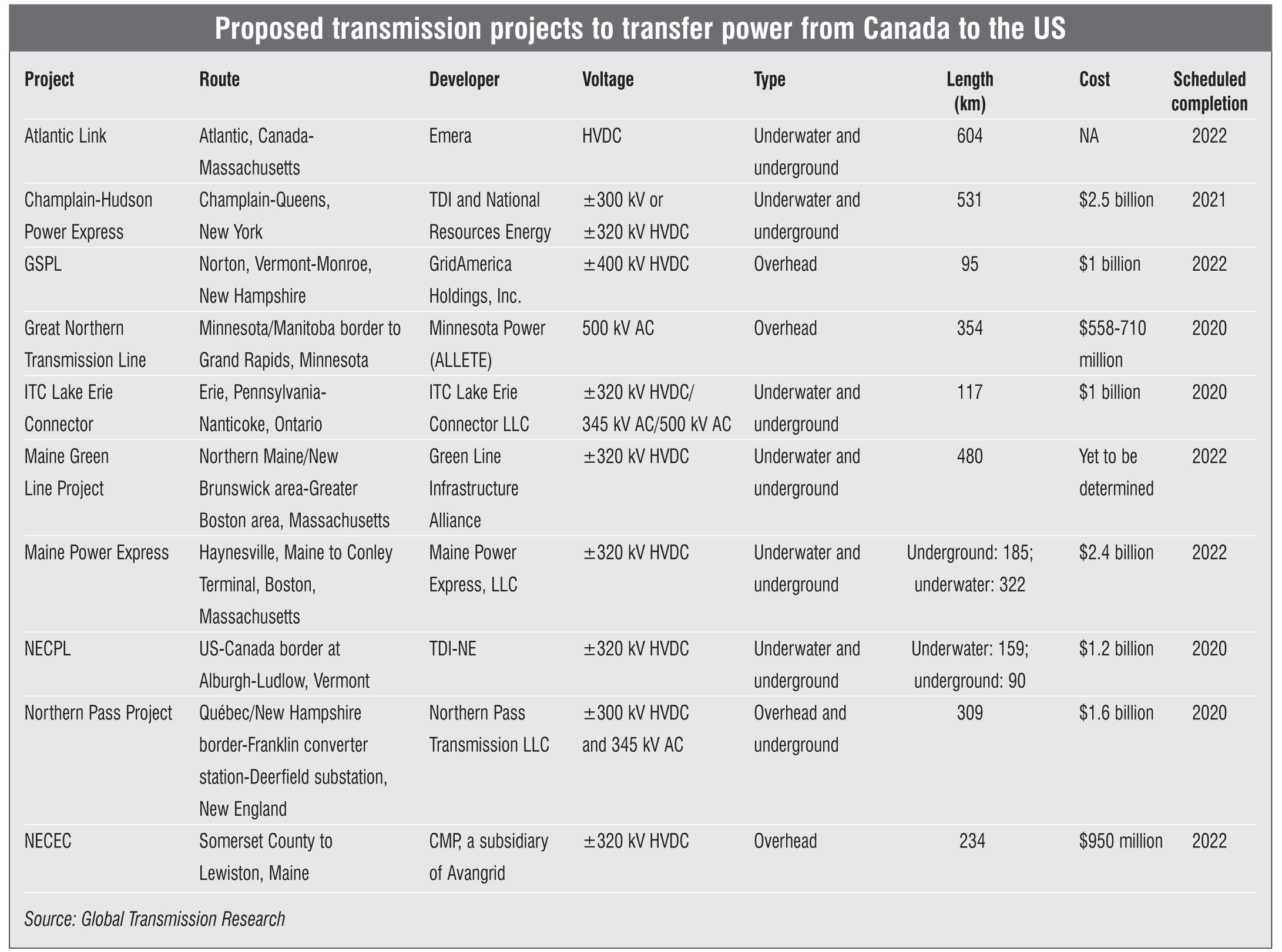 NECPL: The project was proposed by Transmission Developers, Inc. New England (TDI-NE) of the Blackstone Group, a private equity firm. The ±320 kV HVDC project will run from the Canadian border at Alburgh, Vermont, to Ludlow, Vermont, and will deliver about 1,000 MW of renewable energy from Canada to New England. TDI-NE will construct a converter station and other associated facilities in Ludlow. The project has secured the presidential permit.

Atlantic Link: Proposed by Emera, Inc., this is a 604 km HVDC submarine cable project that aims to bring 900-1,000 MW of clean energy from Atlantic Canada to Massachusetts. While this project was not selected by Massachusetts under the state’s clean energy RfP, Emera has stated that it will continue to advance the project.

GSPL: The project was proposed in March 2017 by GridAmerica Holdings, Inc., a subsidiary of National Grid and Citizens Energy. The $1.1 billion project aims to deliver about 1,200 MW of wind energy from Canada to New England. The project comprises a 95 km new HVDC line from a new converter station in northern Vermont to a new converter station in Monroe, New Hampshire. This project was also presented for Massachusetts’ clean energy RfP.

Champlain-Hudson Power Express: The $2.2 billion HVDC project aims to bring up to 1,000 MW of hydroelectric energy from Hydro-Québec to the New York metro area. It has already received approval from the New York Public Service Commission and received the federal presidential permit. The project, being developed by TDI, and is expected to be completed by 2021.

ITC Lake Erie Connector: This is a 1,000 MW bidirectional HVDC project that will provide the first direct link between the  Ontario Independent Electricity System Operator and PJM Interconnection markets. It has secured most of the permits, including the presidential permit. The project is scheduled for completion by 2020. In early 2016, ITC was acquired by Canada’s Fortis, Inc.

Maine Green Line Project: This project was jointly proposed by National Grid and Anbaric to transfer 1,200 MW of power generated by wind energy projects located in Maine and hydropower plants located in Canada to consumers in Massachusetts, New England. However, not much progress has been reported on this project.

Maine Power Express: The ±320 kV HVDC undersea project aims to bring wind-based energy from Maine and hydroelectric power from Canada to Boston. The project is being jointly developed by Maine Power Express LLC (a joint venture of Loring Holdings, National Resources Energy and TDI) and Con Edison. This project was proposed in response to Massachusetts’ clean energy RfP as well.

Several ambitious projects have been proposed to bring Canadian power to the US. All the projects may not come through. However, the constant political chaos in the US and lack of clarity on the government’s energy agenda has not slowed down the progress on key projects. Through these projects, Canada is poised to capitalise on the US’s clean energy goals.