Power transmission and distribution are two critical roadblocks that are resulting in a significant disparity between power generation and consumption in the country. While statistically, India is a power-surplus country with 344 GW of installed capacity as of April 2018, there have been unscheduled power cuts in remote areas and big cities alike. In fact, the peak demand for 2017-18 was 164 GW, of which 161 GW was met, leading to a peak deficit of 2 per cent. Further, issues like unavailability of power and unreliable supply due to transmission and distribution constraints continue to threaten economic development.

Despite the existing transmission and distribution woes, significant renewable energy capacity is added to the grid each year. In fact, about 35 GW of renewable energy capacity has been installed since March 2015, of which 13 GW was added in 2017-18. While renewable energy comes with a lot of benefits, its large-scale integration into the grid poses a major challenge owing to its intermittent nature and resource variability. Thus, it is difficult to forecast and schedule renewable power. Also, its integration requires a more flexible and robust grid with better automation and IT-enabled management systems, which is currently lacking in India.

Even though the central and state governments are conducting auctions on a rapid scale, most of the bid openings are getting postponed due to the unavailability of adequate transmission infrastructure. In some cases, approvals and the signing of power purchase agreements are taking a long time even after project allocation, and solar and wind developers have to wait for prolonged periods for getting access to power evacuation bays. Solar and wind generators are already facing grid curtailment issues in Tamil Nadu, leading to the loss of millions of units of renewable energy due to congestion in the transmission corridor.

To ensure better renewable energy integration and transmission, the creation of a robust intra-state transmission system in Andhra Pradesh, Gujarat, Himachal Pra-desh, Karnataka, Madhya Pradesh, Maharashtra, Rajasthan and Tamil Nadu was approved by the Cabinet Committee on Economic Affairs (CCEA) in 2015-16. These states were selected owing to the high capacity additions planned there. The entire project is scheduled to be completed by 2019-20. The estimated cost of this transmission corridor is expected to be Rs 101.42 billion, with a 40 per cent or Rs 40.51 billion contribution from the government’s National Clean Energy Fund (NCEF), 40 per cent (Euro 500 million) as a KfW loan and the remaining 20 per cent as state contribution. This transmission system would facilitate the evacuation of renewable power from the generating stations to the load centres.

However, a recent study by the Standing Committee on Energy reports a mismatch between the funds allocated for this project and the physical targets set. For instance, for 2017-18, Rs 5 billion was provided for the installation of 350 ckt. km of transmission lines, while for 2018-19, Rs 6 billion has been allocated for the installation of 1,900 ckt. km of transmission lines. Hence, the target for 2018-19 is five times more than the target for 2017-18, while the corresponding budgetary increase is only one-fifth of that in the previous year. As per the committee’s findings, this shows an unrealistic correlation between the budgetary allocation and the corresponding physical targets set by the government, and it seems highly unlikely that this transmission project will be completed within the scheduled time frame. The committee has recommended that the Ministry of New and Renewable Energy (MNRE) take quick action and get the green energy corridor (GEC) completed within the stipulated time to meet the country’s renewable energy targets. 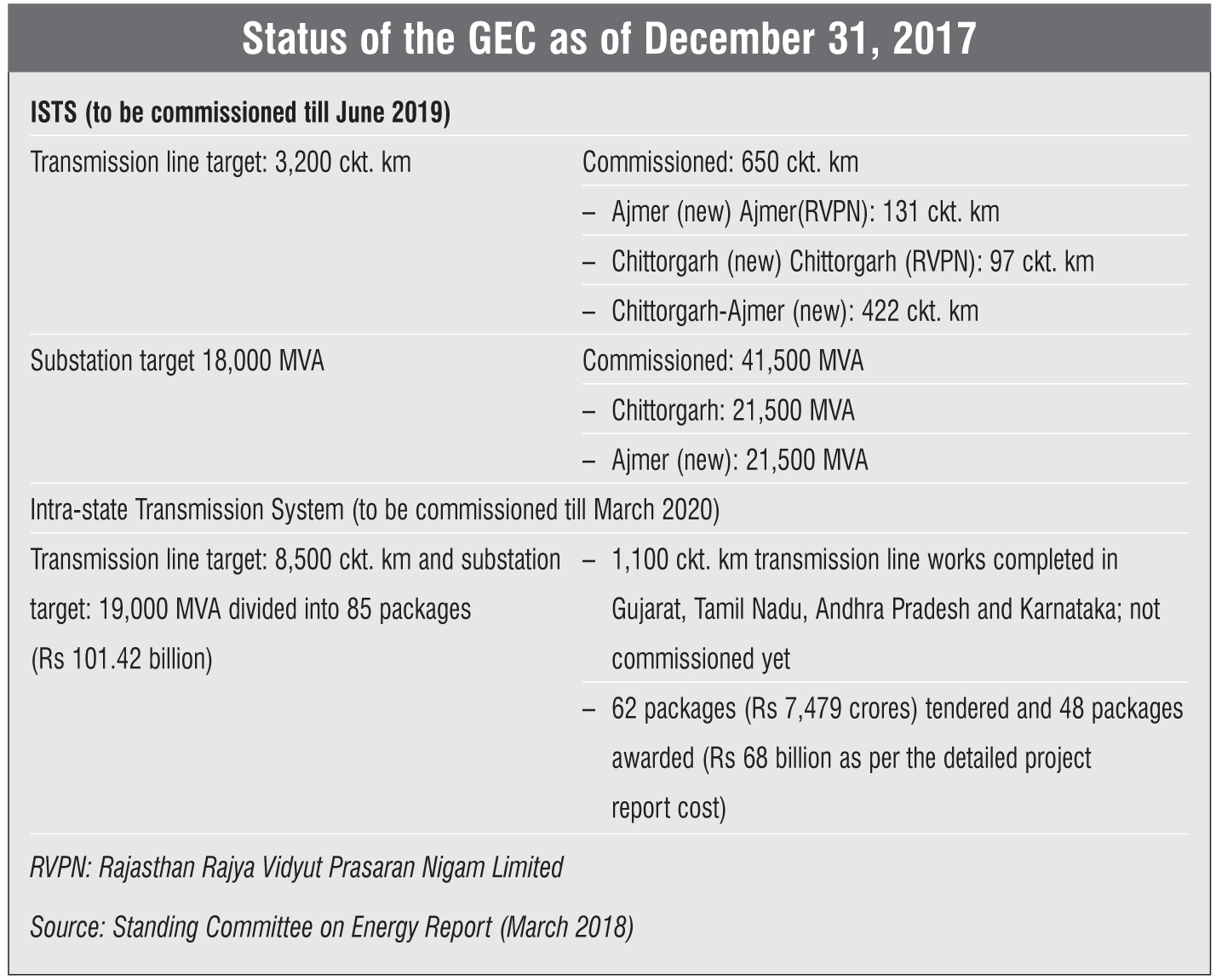 In fact, the Solar Power Developers Association has requested the MNRE to direct the Solar Energy Corporation of India and NTPC Limited to defer the bid submission deadlines for their solar auctions due to the ongoing transmission issues. Strong coordination is required between the physical renewable energy targets, and the available and planned transmission infrastructure in correlation to the allocated finances for future transmission projects. Investments in renewable energy projects will not bear fruit till they start feeding energy into the grid, which makes the GEC project a priority for the government in order to meet its targets.

With only about 70 GW of installed renewable-based power capacity, massive solar and wind capacity additions are required in the next three years to fulfil the huge target of commissioning the remaining 105 GW by 2022. There has been limited progress so far in the development of the GEC, which is a key step towards the development of robust transmission infrastructure in the country. The government needs to fast-track the development of these projects to keep pace with the expected increase in renewable energy generation from about 8 per cent at present to 40 per cent till 2030.