Clean Hydrogen in European Cities (CHIC) was a flagship zero-emission bus project, under which a fleet of 54 fuel cell electric buses and nine hydrogen refuelling stations were deployed across eight cities in Europe and one city in Canada. The project, which started in 2010 and ended in December 2016, involved bus manufacturers, infrastructure suppliers, transport operators and research organisations from eight countries.

The total cost of the project was Euro 81 million, of which Euro 25.88 million, granted by the Fuel Cells and Hydrogen Joint Undertaking, was used in the deployment of 26 buses and charging infrastructure.

A fuel cell bus is a type of electric bus that uses hydrogen as fuel to generate electricity through an electrochemical process. This electricity then powers electric motors.

Some of the key features of fuel cell buses are the following: 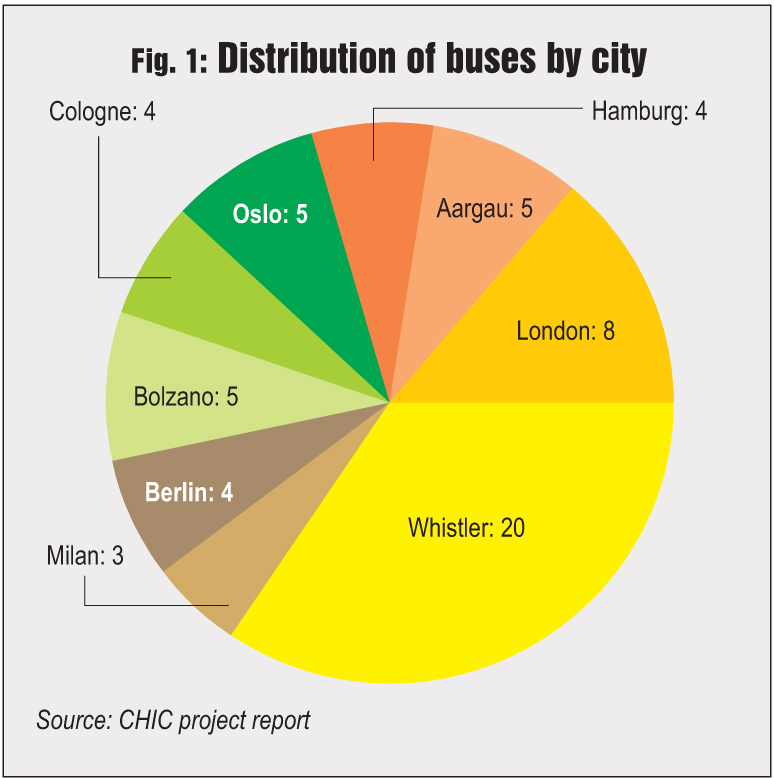 Bus operations: The buses deployed under the CHIC project have been meeting the daily operational requirements of public transport agencies without any compromise in efficiency and quality. The 54 buses have together:

Under the CHIC project, battery-fuel cell hybrid bus versions were deployed, wherein hydrogen was used as the fuel source to recharge electric batteries or super capacitors when depletion occurred. The hybrid versions reduced the size of fuel-cell stacks installed in the buses, which substantially increased the efficiency and reduced the cost of the buses.

Infrastructure operations: The CHIC project deployed nine hydrogen refuelling stations, which together refuelled over 1.2 million kg of hydrogen in 62,000 fillings. The average availability of hydrogen refuelling stations was 97 per cent, whereas that in previous projects was 90 per cent. The major reason for the disruptions was immature supply chains, which made hydrogen and spare parts unavailable at times. The average refuelling time was six to eight minutes for a single refill of 17 kg, well below the project target of 10 minutes. 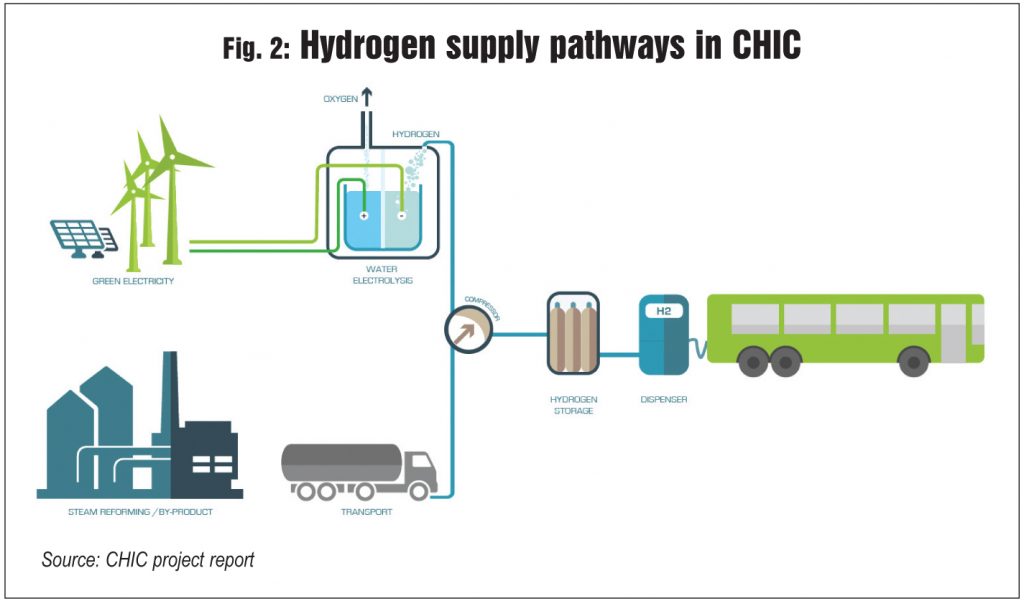 The analysis of their experiences and expectations revealed high support for the deployment of fuel cell buses and identified challenges faced in the uptake of the new technology. An important finding of the study was that the case for transition towards fuel cell technology would require more reasons than environmental benefits and energy efficiency because other competitive technologies such as hybrid and electric buses also score well on these fronts.

One key competitive advantage of the new technology is value for money. Value addition can be in terms of improved bus services and more comfortable and appealing design, among others. The perceived value addition is an important factor in accepting the higher cost of fuel cell buses.

The discussions between the sceptics of hydrogen technology and CHIC partners identified the following points:

A life cycle assessment study was conducted to quantify the environmental impact of fuel cell buses during all phases of their life cycle from extraction of raw materials and production of buses to operations and maintenance of the buses, and their disposal. The overall environmental impact of fuel cell buses was measured in terms of their global warming potential (GWP). 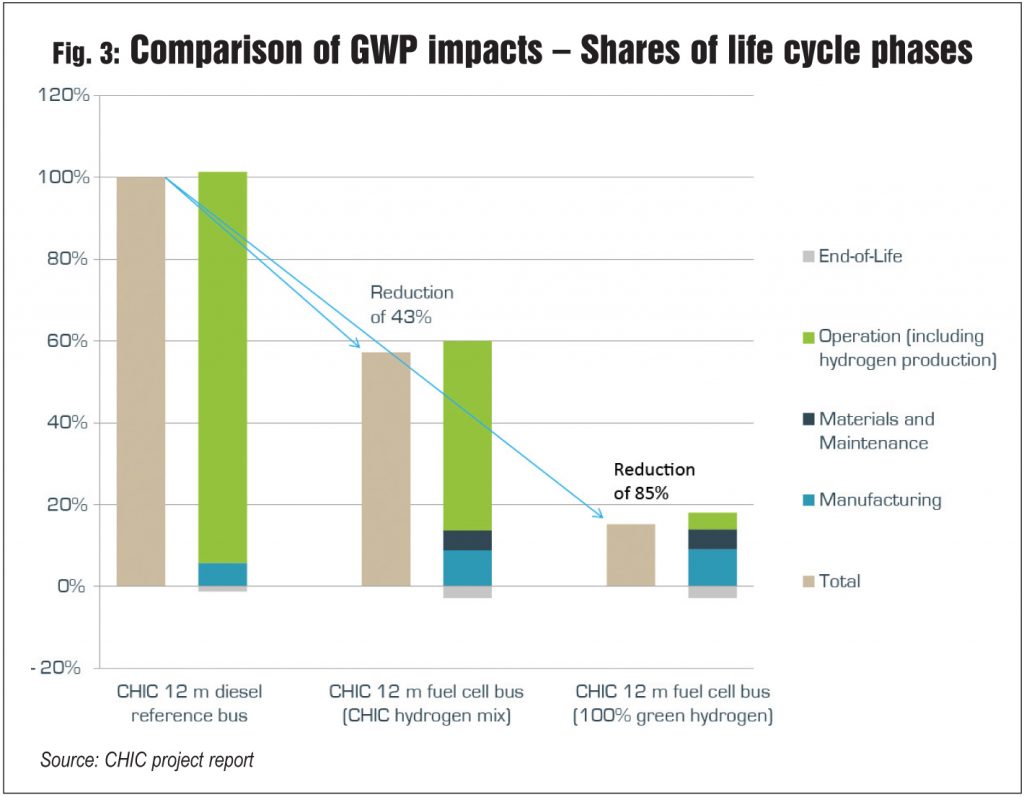 Two scenarios for fuel cell buses were studied – one where hydrogen produced from renewable energy sources is used and the other where a mix of renewable (72 per cent) and conventional sources (28 per cent) is used. A 12 metre long fuel cell bus with a consumption of 9 kg hydrogen per 100 km was used for comparison with a 12 metre diesel-fuelled bus with a consumption of 40.9 litres per 100 km. The lifetime of both the buses was assumed to be 720,000 km.

The CHIC project has significantly enhanced fuel cell technology, reduced the cost of fuel cell buses from Euro 1 million to Euro 850,000 and increased the operational availability of the buses. The project has recommended the following measures for further improvement in the fuel cell bus scenario:

Reduction in capital costs: The most significant barrier to the increased uptake of fuel cell buses is the high capital cost. This can be attributed to the batch size production of buses and equipment rather than commercial-scale production, among other factors. Economies of scale are required to optimise the manufacturing process and subsequently bring down the cost. This can be achieved through the joint procurement of buses by transport operators. These large-scale orders will allow bus manufacturers to invest in large-scale production facilities, thereby resolving issues such as supply chain disruptions by increasing the availability of equipment. Currently, a 12 metre fuel cell bus costs Euro 850,000 and economies of scale have the potential to reduce the cost to as low as Euro 400,000.

Another way to achieve economies of scale is the increased use of fuel cell technology in other areas of the automotive applications such as cars and trains. This will further increase the use of refuelling stations and manufacturing facilities and facilitate the commercialisation of hydrogen vehicles.

Training of employees: One of the key reasons for the disruption in operations was the shortage of trained staff to handle technical issues. Sufficient time and financial resources need to be allocated for the training of employees so that they can effectively diagnose and fix technical problems.

Improvement in availability: The operational availability of fuel cell buses needs to match that of conventional buses. To this end, the timely supply of spare parts and hydrogen fuel needs to be ensured.

Supportive government policies: Local authorities and national regulators are expected to play a key role in the introduction of hydrogen technologies by mandating zero-emission public transport in certain zones.

Collaborative approach and strong project management: The success of fuel cell deployment trials requires effective planning, a funding strategy and project management capabilities. Given the diverse set of partners involved, collaboration must begin when the project is at an early stage. A delivery forum should be established where all partners involved in the project (policymakers, operators, infrastructure providers, bus suppliers, funders, planners, etc.) can meet and update each other on the progress.

The CHIC project has been successful in increasing awareness and interest in fuel cell buses. The results have shown that fuel cell technology has an immense potential for lowering greenhouse gas emissions. Given that fuel cell buses face competition from other low-emission and zero-emission bus technologies, further government support and favourable procurement strategies are needed to develop the market.