This growth is characterised by record low tariffs, declining capital costs, swift and transparent auction and allotment of projects, all of which have had a significant impact on the way projects in the sector are financed. Both the equity and debt markets are witnessing the emergence of innovative financing mechanisms.

Debt funding for renewable energy projects has, in particular, seen considerable change. In the initial years, projects were primarily funded by banks or non-banking financial companies. Of late, bank debt funding has expanded with greater flexibility of leverage and infrastructure debt funds playing an active role in refinancing operating renewable energy projects. This is helping improve the return profile of projects and freeing up the balance sheets of financial institutions for further lending.

While on the one hand, state banks are getting more reluctant to lend to the power sector due to the existing bad loans, on the other, foreign investors are attracted to the sector due to the country’s commitment to expand its renewable energy capacity.

However, the most significant development has been the ability of renewable energy developers to access the debt capital markets. In recent years, there have been a series of bond issuances by domestic and international investors. Green bonds and masala bonds are two important and innovative debt capital market instruments that have further improved the pricing and return profile of projects.

International and multilateral organisations have also been supporting climate action in developing countries like India by deploying green finance. The Green Climate Fund, for instance, has recently announced that it will invest in a groundwater recharge and solar micro-irrigation project in tribal areas in Odisha over the next four years.

Now, the sector is entering an aggressive merger and acquisition (M&A) phase as larger players with access to finance attempt to scale up rapidly through the inorganic route; private equity (PE)-backed players with a modest scale of operations try to liquidate their assets; and global players enter the market by making investments in existing companies.

While these trends are, no doubt, positive, the fact is that the level of funding required to meet the ambitious renewable energy targets is very high. The country’s Nationally Determined Contributions (NDCs), part of the Paris Agreement, will require estimated funds of $2.5 trillion by 2030. According to industry estimates, investments worth $100 billion are called for to achieve the target of 175 GW of installed renewable energy capacity by 2022. The enormous scale of funds requirement has made climate finance a critical component of the country’s renewable energy growth strategy.

After 2013, as the sector and a number of businesses in this space achieved scale and maturity, the equity or quasi-equity investments have primarily been led by pension funds, sovereign funds, large Indian and global utilities, and mezzanine funds based on the companies’ existing operating cash flows. Some of the key deals post-2013 have been the General Insurance Corporation (GIC) and the Abu Dhabi Investment Authority (ADIA) investing $385 million in Greenko, ADIA investing $200 million in ReNew Power, Fallaron Capital and Bank of America Corporation investing $130 million in Hindustan Power, CDPQ (an institutional investor that manages several public and para-public pension plans and insurance programmes) investing $75 million in Azure Power, and Azure listing itself on NASDAQ, raising $100 million.

The number of companies approaching the capital markets is still low, but the scenario is likely to improve with a large number of players achieving an operational project portfolio of over 1 GW, which makes it more likely for them to raise public funds. Moreover, the capital markets in India are currently witnessing an upswing with foreign funds being bullish on Indian companies launching initial public offerings (IPOs). In fact, a series of IPOs have been announced in the sector of late. The most prominent among these are those by the Indian Renewable Energy Development Authority (IREDA) and the Indian Energy Exchange. 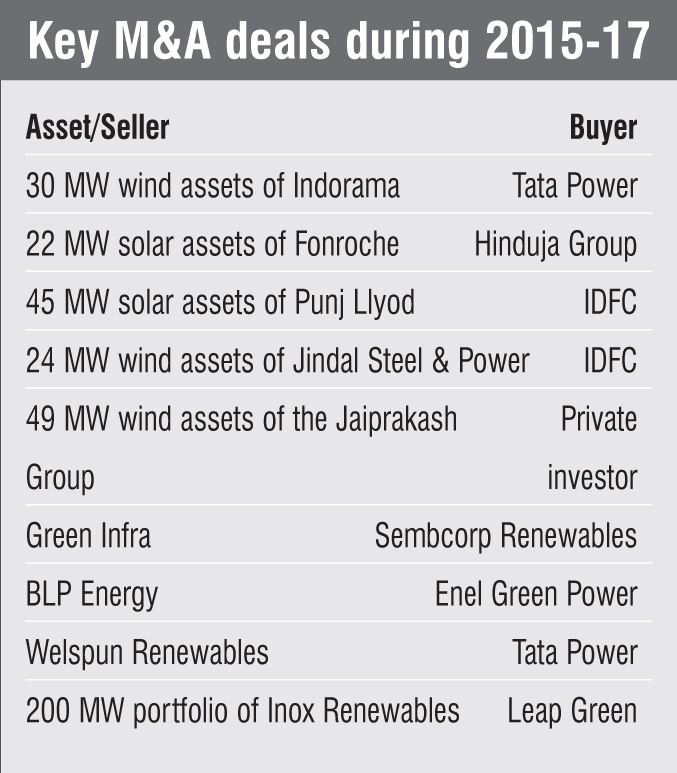 Innovations in the debt market

The most significant development in the renewable financing space has been ease of access to the debt capital markets. There have been prominent bond issuances from domestic and international investors in recent years.

Leveraging the debt market, green bonds have emerged as a successful bridge between the capital markets and climate change initiatives. Since its first issuance in 2007 by two multilateral development banks (the World Bank and the European Investment Bank), green bonds have grown exponentially to become a key tool for raising climate finance, with cumulative issuances pegged at over $180 billion globally as of end-2016.

In early July 2017, state-owned Rural Electrification Corporation (REC) launched its first green bond on the London Stock Exchange’s (LSE) International Securities Market and raised $450 million to finance renewable energy projects. The issue was oversubscribed by almost four times and drew in investors from Asia, Europe, the Middle East and Africa. The REC issue was the third by an Indian company on the LSE. Last year, Axis Bank and NTPC raised about $800 million from the LSE.

Almost half-a-dozen majors are planning to issue bonds to fund their green energy projects in India. The Adani Group, IL&FS Energy, Azure Power (which is listed on the New York Stock Exchange and has power projects in India), Continuum Energy and the Greenko Group are among those planning to raise about $2 billion in the current fiscal year.

Other state-owned and private power producers are also keen to tap global funds for green energy projects. Energy Efficiency Services Limited (EESL), promoted by public sector firms such as NTPC, REC, Power Finance Corporation and Power Grid Corporation, plans to raise about $400 million from multilateral agencies and international bond markets. It is negotiating with the World Bank for a $300 million loan and plans to raise $100 million through masala and green bonds on the LSE. The company had earlier raised a $200 million loan from the Asian Development Bank and Euro 300 million from Germany’s KfW development bank and the French Development Agency.

IREDA has sought clearance for a $300 million green masala bond issue for funding its green projects. The organisation plans to hold roadshows in Singapore, Hong Kong and London. It will use the funds for financing new renewable energy projects as well as for refinancing existing projects.

A number of bond issues are in the pipeline as well. Among private players, New York-listed Azure Power Global Limited, which has projects in Rajasthan, Punjab and other states, plans to raise $500 million through a dollar issuance. Continuum Energy, which is backed by US-based Morgan Stanley and has projects in Tamil Nadu and Gujarat, plans to raise $400 million. Wind and solar power firm, the Greenko Group, which is backed by Singapore sovereign wealth fund GIC and ADIA, is planning a $1 billion issuance to refinance a dollar bond launched three years ago. IL&FS Energy, which has thermal and solar power projects, is considering a dollar-bond issue worth $500 million. And the Adani Group has already raised $250 million via an offshore loan to invest in its solar power project in Karnataka.

While green bonds are becoming increasingly popular in India – with over $2 billion worth of such bonds issued in 2016 – the country still ranks a distant seventh after the US, France, China, Germany, the Netherlands and Sweden in terms of raising green funds. 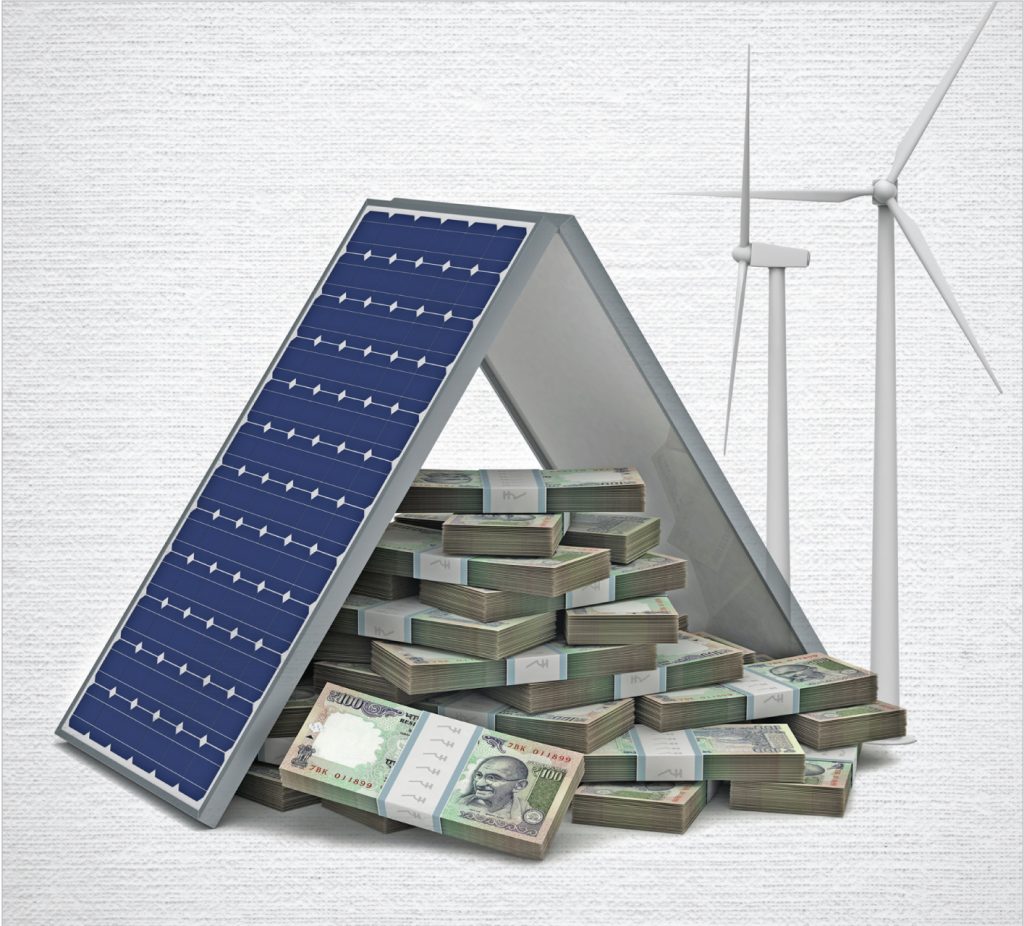 With the sector reaching a certain scale and maturity and companies’ portfolio sizes increasing, consolidation is the natural progression.

In the initial years of renewable energy development, when the sector primarily comprised wind power projects, several corporates set up wind farms though their core business was not power development. This was done primarily to utilise the additional cash available from their core business to generate annuity revenues through the accelerated depreciation (AD) benefits offered to wind project developers. Later, as the industry scaled up and the return profile got adversely impacted due to the phase-out of AD benefits and the introduction of the highly competitive reverse auction process, several of these corporates sought to exit their investments. Large corporates like Jindal Steel & Power, the Jaiprakash Group and the DLF Group exited the business as this was not their core business area. These assets were taken over by wind IPPs, which had access to PE and VC funds and were looking to scale up fast.

Consolidation is now being triggered by sub-250 MW PE-backed players operating in both the solar and wind power spaces. Growing competition has made it difficult for some of these players to sustain their operations and raise fresh equity. It makes business sense for them to exit these assets today at a time when companies have access to capital and are aggressively looking to buy out existing projects to scale up their portfolio quickly.

Lastly, with India emerging as one of the largest renewable energy markets in the world (and the second most attractive country after China for renewable energy investment, as per a recent survey), it is drawing substantial interest from large global investors and utilities. Many of them have taken the inorganic route to enter this market and develop a presence here, driving large M&As in the sector.

Net, net, the financing scenario for renewable energy projects has improved significantly in the past few years. Going forward, this sector is likely to see heightened activity in terms of capital-raising and strategic M&As. As the industry’s scale, return profile and maturity improve, the industry can expect the emergence of a stronger domestic bond market and interesting financing instruments, InVITs for example.

Ayana Renewable Power and Maxeon Solar Technologies have completed and put into commercial service the 192 MW Bikaner 1 Solar Farm in Rajasthan. It is a utility-scale solar power plant built in the second half […]

The Crown Estate of the UK has been granted authorisation to enter into leasing agreements for six fixed offshore wind projects totaling about 8 GW. The action was taken in response to the Crown Estate’s […]

The cabinet committee on economic affairs chaired by the Indian prime minister has approved an investment for the 382 MW Sunni Dam hydroelectric project in Himachal Pradesh by SJVN Limited. The project is estimated to […]