India is gearing up to achieve the 60 GW of wind energy target by 2022. To this end, market forces are realigning constantly to arrive at the best possible permutation of low capital costs and low tariffs. As wind turbine technology evolves, it is important to focus on the critical components of wind turbine generators (WTGs) such as drives and motors.

Drives or drivetrains are used in WTGs for converting kinetic energy from wind to electrical energy. These drives comprise smaller components such as bedding, gearboxes, brakes and a generator. Gearboxes and generators are the two main subcomponents of the drivetrain assembly and hence are among the most expensive. A gearbox is used to enhance the angular speed of the shaft that rotates the blades, from low speeds of 25 to 50 rotations per minute (rpm) to the necessary speed of 1,000 to 1,500 rpm. Gearboxes are used in combination with generators that help convert the mechanical rotational energy into electrical energy, usually alternating current.

According to National Renewable Energy Laboratory estimates, drivetrain assemblies typically account for 19.5 per cent of the total wind turbine capital costs. Since the Central Electricity Regulatory Commission has not defined any benchmark capital costs for wind energy for 2017-18, the market potential for drivetrains in India has to be calculated as per the costs defined for 2016-17. Of the total cost of Rs 61.98 million per MW, the cost of drivetrains is calculated to be Rs 12.08 million per MW. Renewable Watch Research has projected the annual wind energy capacity for the next five years, and the corresponding drives and motors demand and market size per year. The cumulative market is estimated at Rs 334.6 million during 2017-22.

Based on the projected growth in wind installations to meet the 2022 targets, the drives and motors market in India is expected to grow significantly, presenting huge opportunities for domestic as well as international market players to improve production facilities and cater to the growing demand. According to the JRC Wind Energy Status Report, 2016, the global onshore drivetrains market is dominated by original equipment manufacturers such as Vestas (18 per cent), GE (13 per cent), Enercon (10 per cent), Gamesa (9 per cent) and Siemens (5 per cent). Meanwhile, the doubly-fed induction generator drivetrain accounts for about 58 per cent of all installations. 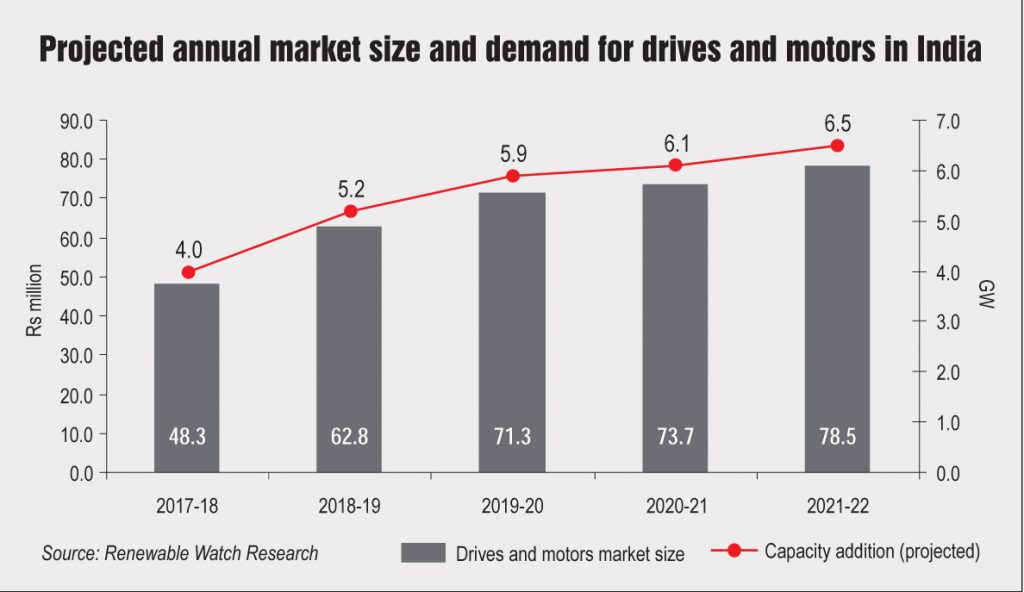 Drivetrains are one of the key components of a wind turbine. The moving parts of a drivetrainare subject to a significant amount of wear and tear, and any deterioration in its components can have a significant impact on the performance of the wind turbine. Some major challenges facing drivetrain technology are deterioration of gears and gearboxes, loss of lubrication, breakage of gear teeth, fatigue-induced damage of the gearbox and generator components, spoiled braking system, damaged yaw bearings and drives, and worn-out wiring systems. Sustained operation of the wind turbine can also lead to fatigue cracks in shafts over a period of time.

A large part of India’s demand for drives and motors is fulfilled through imports. Given the huge demand and market size of this segment, the government is focusing on developing domestic manufacturing capabilities through its Make in India programme. Earlier, wind turbine components including nacelles, rotors, blades and energy converters were exempt from central excise duty in a bid to promote domestic manufacturing. However, with the introduction of the goods and services tax, these will now be taxed at 5 per cent. Considering the overall decrease in capital costs, this is not expected to negatively impact the domestic manufacturing  plans.

In sum, there are sizeable opportunities for manufacturers of drives and motors, and for ancillary equipment suppliers. However, they will have to ramp up their manufacturing facilities to meet the growing demand. 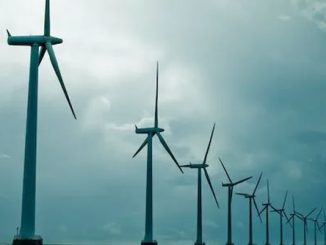 October 26, 2021
Azure Power, an independent power producer in the India, has received the letter of award (LOA) for its first wind project, which is a 120 MW ISTS-con...
More 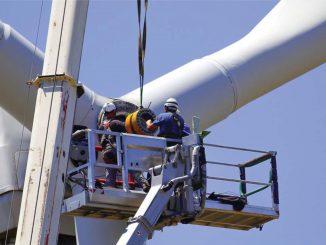 January 20, 2021
Operations and maintenance (O&M) activities play a key role in ensuring the long-term sustainability and growth of wind power projects. According ...
More