The wind energy segment is undergoing a technological transformation globally, with increasing efficiencies and rising hub heights. All the major components of wind turbines are witnessing significant changes. A key component in wind turbines is the drivetrain, which converts kinetic energy from the spinning wind turbine blades into electrical energy. It consists of two main parts, the gearbox and the generator, and various ancillary parts such as brakes, a nacelle frame, a yaw bearing, a yaw drive, a spinner, a hub and bearings. The gearbox connects the low-speed shaft attached to the turbine blades to the high-speed shaft attached to the generator, which then to converts the kinetic energy of the blades into electrical energy.

The SCIG has a simple and robust design. However, it is restricted  by poor speed regulation. Thus, its share in the global installed capacity has been steadily decreasing. The NEG Micon N48 and the Vestas V27 are primary examples of SCIG wind turbines installed across the globe. WRIG turbines regulate the current circulation in the rotor and provide higher control flexibility. However, these turbines suffer from relatively high electrical losses and lack the ability to adequately respond to grid requirements. The Vestas V52 and the Suzlon S82 are the main examples of this configuration available in the market.

DFIGs are the most commonly used generators in the global market. In this configuration, the gearbox increases the rotational speed of the blades, while a partial power converter helps in controlling the generator speed so that it can be adapted to the rotational speed of the mechanical system. The DFIG system requires around 35 per cent) of the generator’s rated capacity because only 25-30 per cent of the input mechanical energy is fed into the grid through the converter from the rotor and the remaining goes directly to the grid from the stator. This improves the efficiency of the generator as only a small amount of power is lost through the converter. Controlling the rotor circuit in this way also allows the generator to import and export reactive power to support the grid during outages. The Vestas V90, the Gamesa G80 and GE’s GE1.5 are some of the popular models in this configuration.

PMSGs uses a permanent magnet instead of a coil, thus reducing the number of moving parts as well as maintenance requirements. PMSGs also have a high energy density and deliver lighter and more compact units. They are also more efficient than traditional DFIGs and EESGs, particularly while operating on partial loads. One of the key manufacturers of PMSGs is Goldwin, which manufactures direct drive PMSGs.

The gearbox is one of the heaviest and most expensive components of a wind turbine drivetrain. It increases the angular speed of the shaft connected to the blades, from speeds of 25-60 rotations per minute (rpm) to the required speed of 1,000-1,800 rpm. Some turbines have a direct drive configuration where the shaft of the blades is directly connected to the generator. Although this configuration resolves the issue of inefficiency caused by gearboxes, it cannot be used with all types of generators and is usually used with PMSGs and EESGs. However, the newer models of PMSG and EESG turbines have started using gearboxes.

A gearbox is required to operate a wind turbine and increase the asset life. It also reduces the torque on the generator shaft and increases the shaft’s speed, making it easier for the generator to generate AC power at the requisite frequency. While most gearboxes use a combination of helical gears, planetary gears are also commonly used. About 83 per cent of the global onshore wind turbine installations and 95 per cent of the global off-shore turbines (in terms of capacity) use a geared drivetrain. Gearboxes are usually part of original equipment manufacturers’ drivetrain solutions. 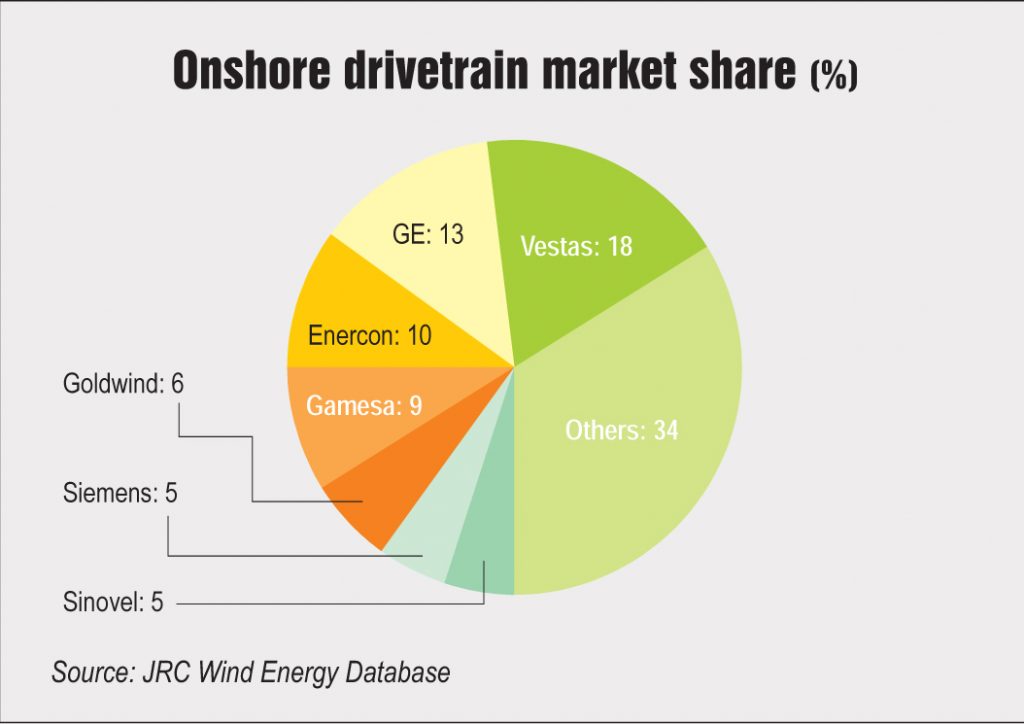 SCIG turbines account for 12 per cent of the onshore drivetrain configuration market in terms of global installed capacity. This segment is led by Siemens with an installed capacity share of about 42 per cent in the total SCIG installations. The WRIG market occupies about 6 per cent of total onshore drivetrain configuration market in terms of capacity and is led by Vestas, accounting for 50 per cent of all WRIG installations.

Geared and high-speed DFIGs are by far the most dominant configuration in the drivetrain market, accounting for 58 per cent of the total onshore capacity. The market leaders in the DFIG configuration are GE with almost 20.7 per cent market share, followed by Vestas and Gamesa with 19 per cent each. 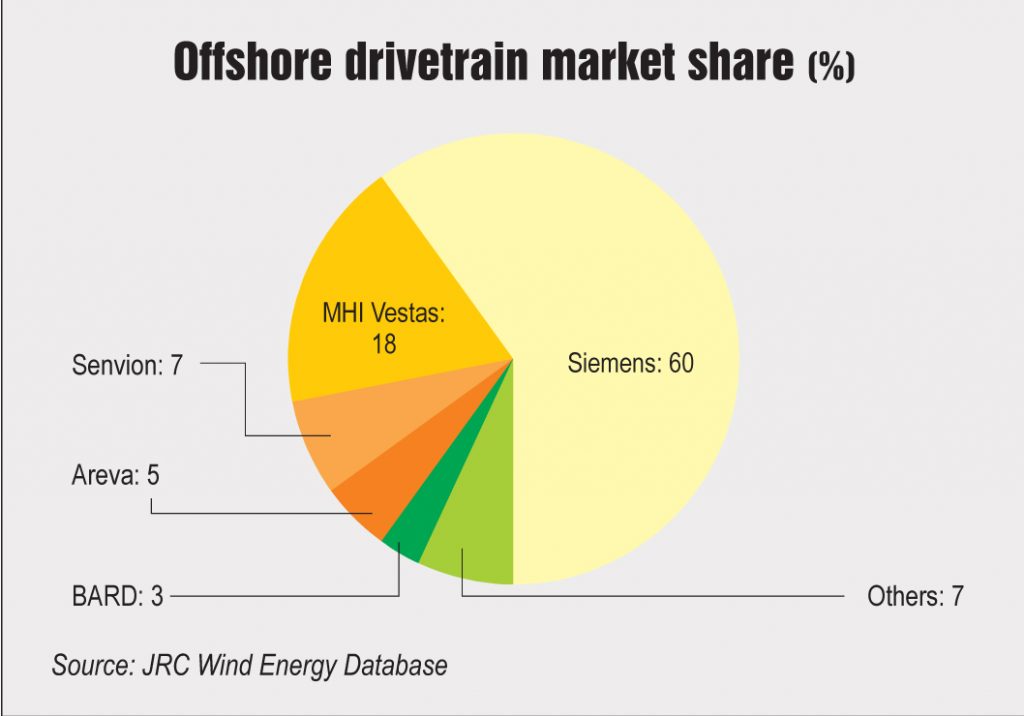 EESGs are used by 9 per cent of the global onshore wind turbines (in terms of capacity). The EESG market is led by Enercon with almost all installations being manufactured by the company. Geared and high-speed SCIGs with full power converters are used in 5 per cent of global onshore installations. Siemens is the established market leader with a near monopoly in this segment. 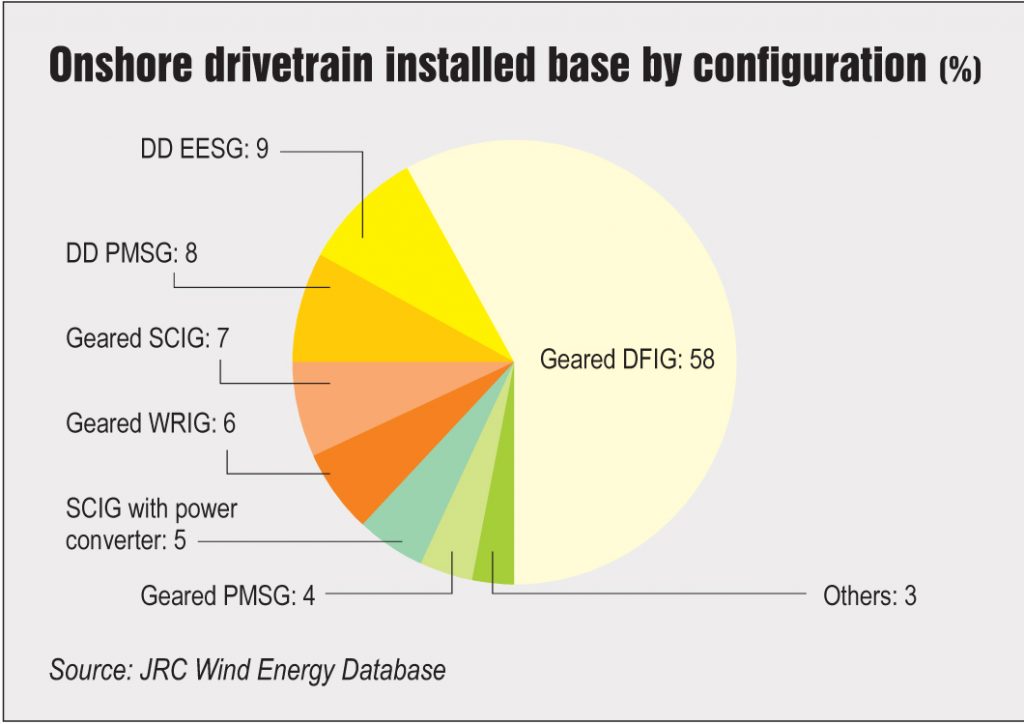 The gearbox is susceptible to failure due to various factors, such as dynamic and variable loads owing to changing wind speeds, and extreme wind events including gusting, wind direction change and windshear. These events put a significant amount of stress, both normal and torsional, on the drivetrain. Wind turbines drivetrains also undergo severe transient loading during start-ups, shutdowns, emergency stops and grid connections. Further, the increasing rotor diameter implies an additional stress on the gears, which can lead to wear and tear of the gear teeth. This problem is more pronounced in offshore wind installations, which face the additional problem of corrosion. The absence of proper sealing and lubrication of the gearbox can, in extreme cases, lead to breaking of the gear teeth, rendering the gearbox inoperative. Further, severe transient loads can also lead to torque reversal, which can cause significant damage to bearings. These transient loads can also cause vibrations, which may seriously compromise the strength of the drivetrain components and turbine blades. 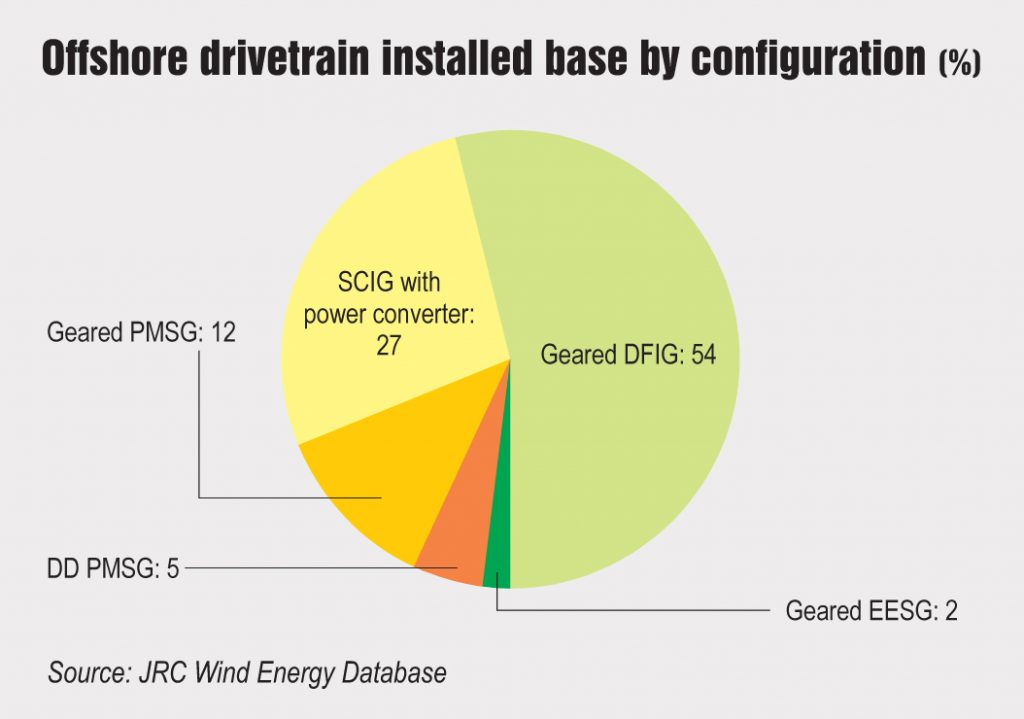 The generator also faces a number of issues though not as many problems as the gearbox. Wind turbine generators are different from other industrial generators because they work with a significantly fluctuating power source. The variability of wind conditions can cause continuous changes in the speed of the rotor blades, which, in turn, varies the mechanical energy transmitted to the generator. This can lead to generator failure if these factors are not taken into account in the generator design. Generator failures can also occur due to wear and tear, overspeed, cooling system failure, voltage irregularities, coupling failures, component misalignment, etc. These problems can cause a considerable drop in wind turbine efficiency, and can even lead to a complete failure of the wind turbine.

The increase in wind power installations has increased the size of the wind turbine drivetrain market as well as the turbine capacity. Given the growing turbine capacity along with longer blade lengths and rotor diameters, there is a need to undertake research and development (R&D) in drivetrain technology in order to reduce costs and effectively handle the higher rated capacity of turbines.

As far as the generators are concerned, since DFIGs can be used only for turbines with less than 3 MW capacity, the current R&D is focused on improving PMSGs and reducing their capital costs as developers look to increase the turbine capacity. This involves reducing the content of rare earth metals (in particular dysprosium, which is the costliest and most prevalent rare earth element) in the permanent magnets deployed in PMSG. In this regard, GreenSpur Renewables has developed a ferrite-based low-cost direct drive PMSG for the wind turbine market. Ferrite is abundant and is much cheaper than rare earth elements. It is expected to drive down capex, making it an excellent choice for larger turbines. Another focus area has been the superconductor-based generator. This type of generator can lead to significant weight and cost savings, while also reducing resistance losses. The superconductor generator is still under research and has not yet been commercialised anywhere.

Note: The article is partly based on the JRC Wind Energy Status Report 2016 Edition.