Renewable gases can be produced by anaerobic digestion of wet biomass, gasification of woody solid biomass, or the power-to-gas process, in which renewable power is used for hydrogen (H2) production through electrolysis in order to split H2O in the first step and transform the H2 into methane in the second step. The most mature of these three processes is biogas production by anaerobic digestion, where wet biomass is degraded by microorganisms under anaerobic conditions. For biogas production, various raw materials such as animal by-products, vegetable by-products, organic household and industrial waste, as well as energy crops can be used.

Depending on the feedstock characteristics, different technologies are available for anaerobic digestion and can be divided into wet and solid, and continuous and discontinuous systems. Biogas yields vary between different feedstocks, primarily determined by the organic dry matter content and its specific degradability. Low dry matter content limits the transport distances of the feedstock due to economic limitations (low dry matter contains water, which does not contain energy). Pretreatment of the biomass may be necessary in order to make the organic fraction available for the microorganisms or to secure hygienic standards in the case of feedstock, which may be critical from the epidemiological and phytohygienic standpoint.

Biogas consists of mainly methane (about 60 per cent), carbon dioxide (CO2) about 40 per cent and some minor impurities (mostly H2S and H2O), with different shares depending on the feedstock being used. In order to use biogas as vehicle fuel, purification and upgradation (CO2 removal) are necessary to reduce contamination with hazardous components and increase the calorific value of the gas, that is, to make it interchangeable with conventional fuels (especially natural gas).

Currently, biogas plant operators can choose from among a wide variety of biogas purification and upgrading technologies. The most common technologies for CO2 removal are based on the principles of adsorption, physical and chemical absorption or separation by membranes. Their performance differs mainly with regard to process energy demand and methane losses during the process. Different technologies may have different advantages and disadvantages depending on the individual circumstances of each project.

Upgraded and purified biogas can be transported from the production location to a filling station by means of the public gas grid, a local gas pipeline or by trucks (in case there is no gas grid available). Depending on the gas grid operating pressure, the gas needs to be pressurised. When transported by trucks, it is usually carried or stored in high pressure cylinders in the range of 200 bars to 250 bars. Another possibility is liquefying the biogas in order to increase the energy density (three times as compared to compressed biogas at 200 bars). This higher efficiency and cost-intensive option is only used for long distance transport such as by heavy duty vehicles or maritime transport. The upgraded biogas can be used in conventional natural gas vehicles (NGVs), which include light duty commercial vehicles, city buses and gas-powered trucks.

Factors such as energy efficiency, greenhouse gas (GHG) emissions and costs need to be taken into account as they characterise biomethane vehicle fuel end-use. Depending on the digestible biomass of the used feedstock, the typical overall efficiency of biogas fuel is between 70 per cent and 85 per cent. The efficiency is mainly determined by the following factors:

When biogas is being produced from energy crops, the potential driving distance based on the amount of fuel produced from 1 hectare of agricultural land is around 67,600 km, which is the longest as compared to other alternative biofuel options (biomass-to-liquid, rapeseed oil, biodiesel and bioethanol). For such a long driving distance, municipal organic waste from roughly 250 inhabitants and manure from roughly 50 pigs over one year is necessary to produce the same amount of biogas.

The application of biomethane in transportation helps reduce GHG emissions by 60-80 per cent as compared to gasoline. The GHG reduction potential mainly depends on the feedstock being used. There is a higher reduction potential when waste and residues, instead of energy crops, are used.

The total cost for biomethane production, starting from feedstock supply to gas grid injection, ranges from $0.28 per cubic metre to $1.94 per cubic metre of methane under Central European conditions. The cost depends on the plant capacity and the biomass category. According to a case study, plant capacities range from 100 cubic metres per hour to 2,000 cubic metres per hour for raw biogas production; capital costs, in particular, decrease with plant capacity. Producing biomethane from energy crops is costlier than from waste (it is in the range of $0.75-$1.94 as compared to $0.28-$0.63 for each cubic metre of methane produced). This is mainly because of the significantly higher prices of biomass. Operating costs account for the largest part of the total cost. Costs related to anaerobic digestion are mainly on account of feedstock. The cost of upgrading technologies is quite similar for different types of processing. The largest share of costs is related to auxiliary energy supply. Finally, the distribution costs depend mainly on the distance between the transport hub and customers as well as the associated need for gas compression for transportation. It is challenging to estimate the costs of distribution systems as these are particularly dependent on the country and area.

Biogas production for transportation is mainly concentrated in Europe, especially in Sweden, Switzerland, the Netherlands and Germany. However, many countries have significant potential in terms of both biomass availability and NGV infrastructure.

Determining the availability of feedstock suitable for biogas for vehicle fuel is challenging because of the lack of data. Nevertheless, studies have shown that there is significant potential for biogas production based on energy crops, municipal waste and animal by-products worldwide. It is mostly concentrated in Europe, Latin America, North America and Asia (each between 1,500 petajoules [PJ] per annum and 2,000 PJ per annum) as compared to Africa and Australia. 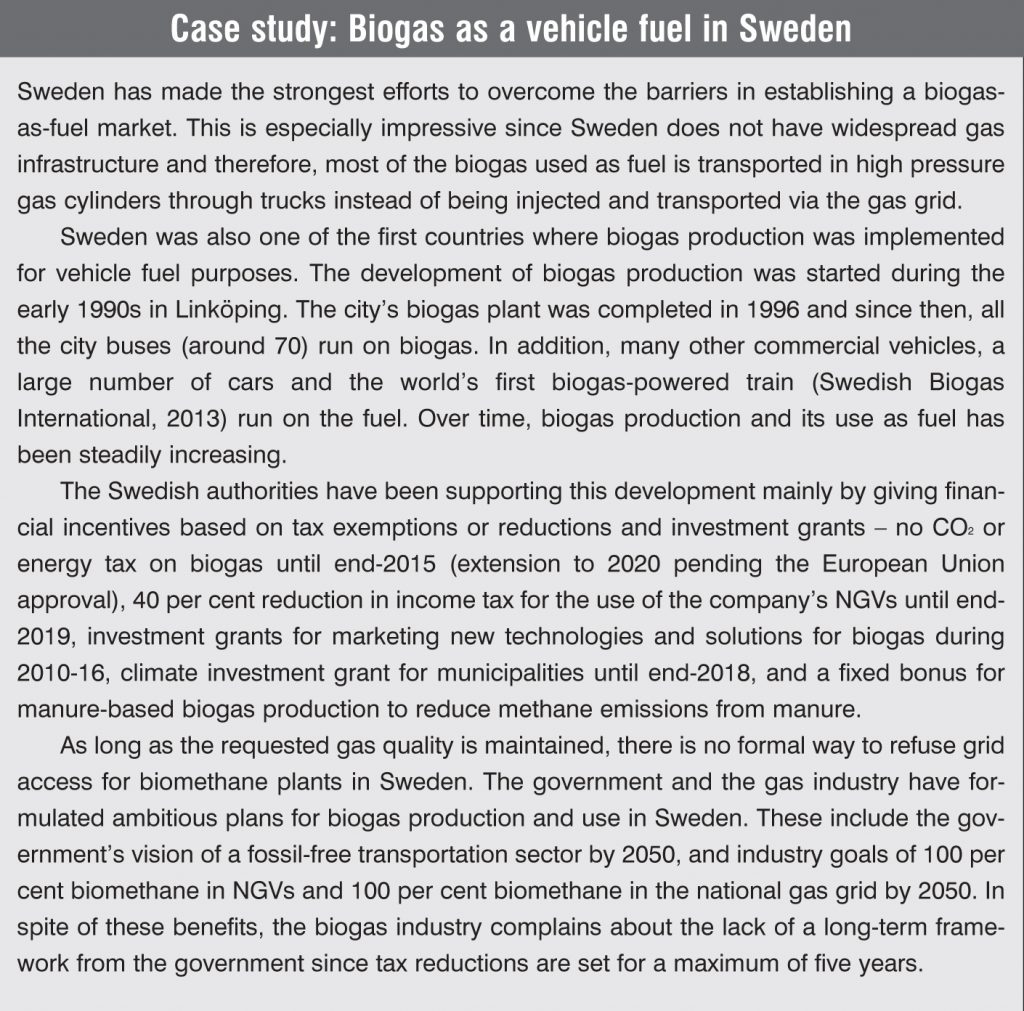 There are several impediments to project development and biogas implementation. These bottlenecks can be identified throughout the production line, from feedstock collection to distribution, and include costs and lack of policy support. The main challenges that can impede the supply of biogas as fuel are lack of centralised biomass availability, relatively high costs compared to fossil fuels, lack of awareness about the advantages of biogas as an energy carrier, changing and short-lived regulatory frameworks, monopolistic structures in the energy sector, absence of clear rules for gas grid access, absence of NGV infrastructure, and lack of highly efficient heavy duty gas vehicles.

Several steps can be considered for addressing these issues. Regulations on biogas/biomethane production and need to allow co-fermentation, especially of energy crops in order to reach a minimum production capacity. This, in turn, allows biomethane supply at competitive production costs. In order to stimulate the biogas-as-a-vehicle-fuel market, some economic incentives are needed. Further, reliable regulation (including incentives) should be guaranteed for at least 15 years, as biogas plant operators need a 10-20-year planning horizon to pay back the investment. Public authorities should also be open to new solutions for waste treatment and strongly support establishing a separate collection of organic waste. Finally, political support is necessary to overcome the chicken-and-egg situation, for instance, through tax reductions or investment subsidies for gas filling stations and/or NGVs. n

Based on the International Renewable Energy Agency’s research report, “Biogas for Road Vehicles”

May 2017
With the growing demand for telecom services, the energy consumption for network operations has also increased significantly. The availability of powe...
More 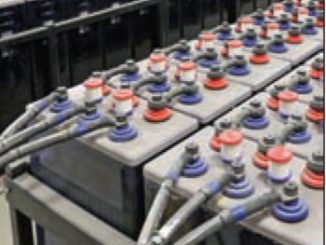 May 2017
With the increase in the share of renewable energy in total generation arises the need to optimise generation and maintain grid reliability. One of th...
More 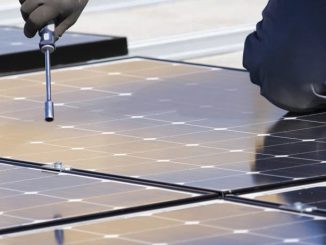