According to the Pareto principle, 80 per cent of consequences come fr­om 20 per cent of causes. In line wi­th this principle, only a few policies/regulations have led to major changes in an industry. The renewable purchase obligation (RPO) policy might be one such regulatory tool that has led to major structural changes in the renewable energy sector (for regulators, discoms, institutional consumers, de­velopers, etc.). This key policy in the rene­wable energy space is again being discussed by the industry as the Ministry of Power (MoP) has issued an RPO and en­ergy storage ob­ligation (ESO) trajectory till 2029-30. Ac­cording to this order, the total prescri­bed RPO will progressively increase from 24.61 per cent in 2022-23 to 43.33 per cent by 2029-30. This includes wind RPO, hydropower purchase obligation (HPO) and other RPOs.

The Central Electricity Regulatory Commi­s­sion will construct a renewable energy certificate (REC) scheme for hydropower to ease HPO compliance with a capping price of Rs 5.50 per kWh from March 8, 2019, to March 31, 2021, and an annual es­calation of 5 per cent. Hydropower im­ported from abroad will not be counted to­wards HPO. The order also specifies that HPOs of the state/distribution company may be met through the free power being provided to the state from the LHPs and PSPs commissioned post March 8, 2019, excluding the contribution towards local area development. If the free power is in­sufficient, then a state would have to buy additional hydropower to meet its HPOs or an equivalent amount of RECs.

Any deficit in meeting other RPOs each year can be made up for with the extra en­e­rgy utilised by wind power plants compl­e­ted after March 31, 2022, beyond what is needed to satisfy the wind RPO. It can also be met through the excess energy co­nsu­m­ed from eligible LHPs (including PSPs) co­mmissioned post March 8, 2019, beyo­nd what is needed for HPOs for that year.

The ESO will be calculated, in energy terms, as a proportion of the total electricity consumption, and will be regarded as satisfied only when at least 85 per cent of the total energy stored in the energy storage system is obtained from renewable energy sources each year. For energy sto­rage, which has been introduced for the first time, the targets will increase from 1 per cent during 2023-24 to 4 per cent by 2029-30. This will be met through solar and wind power projects with energy storage.

The Power System Operation Corporation Limited has been given the responsibility to maintain data related to RPO compliance. In addition to the RPO and ESO trajectory an­no­unced by the MoP, the state commissions may consider notifying RPO trajectories, including HPO and ESO, for their respective states. 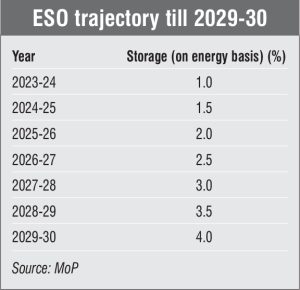 Back in March 2019, the government had introduced important measures to promote the hydropower segment, including two key announcements – the classification of LHPs as renewable energy sou­r­ces, and the introduction of the HPO mechanism as a separate entity within the non-solar RPO category. In 2021, following up on these announceme­nts, the government notified the HPO trajectory, giving states hydropower procurement targets along the lines of RPOs. HPOs were to be applicable to all obligated entities and were to cover LHPs commissioned on or after March 2019. The policy change was introduced to meet the 30,000 MW hydro capacity addition target by 2030.

In August 2021, the government issued the Draft Electricity (Promoting Renew­able Energy through Green Energy Open Acc­ess) Rules, 2021. Under this, industri­es were allowed to meet their RPOs by purchasing green hydrogen. It was specified that “the quantum of green hydrogen wo­u­ld be computed by considering the equivalence to the green hydrogen produced from one MW of electricity from the renewable sources or its multiple.” These rules were notified in June 2022. In the final version, a uniform RPO on all obligated entities in the area of a distribution licensee has been planned, and the use of green hydrogen/green ammonia for the fulfilment of RPOs has been allowed.

Between 2010-11 and 2013-14, only six st­ates – Arunachal Pradesh, Himachal Pra­desh, Karnataka, Meghalaya, Mizoram and Tamil Nadu – complied with the RPO targets set by their respective state elec­tricity regulatory commissions. During this period, around 95 per cent of RPO co­mpliance happened through the direct purchase of renewable energy, and the remaining through the REC mode. While 17 states fell short of meeting their RPOs, only six reported purchase of RECs, even though RECs were available on the designated exchanges. Gujarat met 43 per cent of its RPOs through RECs – the most among the relevant states.

The data provided by the Ministry of New and Renewable Energy (MNRE) on cumulative solar RPO achievements up to 2016-17 shows that 27 states/union territories (UTs) failed to comply with their RPOs. Overall, of the cumulative target of 17,660 MW, only 10,803.49 MW was achieved, a deficit of approximately 39 per cent. This lack of compliance continued in next year as well. For financial year 2018-19, only four states could achieve their RPO targets, and only seven could achieve more than 60 per cent of their targets, with the rest achieving less than 60 per cent.

Reasons for the lack of compliance

There are a couple of reasons behind this lack of RPO compliance. The first is the declining trend of projects registered through the REC route. Under the MNRE framework, only renewable energy projects with a minimum capacity of 250 kW were eligible for registration under the REC mode, initially. It was envisaged that as the REC market matured, off-grid technologies could also be considered for inclusion in the REC mechanism. How­ever, despite the initial surge of RECs registered, interest gradually fell. This led to a chicken-and-egg scenario, as the de­clining interest in RECs was blamed on poor RPO compliance across states. The­re has also been a rise in unrede­e­med RECs due to insufficient RPO compliance. Such RECs grew from 108 at the end of 2010-11, to 9.365 million as of August 2014. This led to a decline in the planned cash fl­ows of generators that took the REC ro­u­te, which may have further impacted in­vestments in renewable energy projects.

Recent government reports have attributed RPO non-compliance to the discoms’ perception that renewable energy costs more than other energy sources. This results in cost-driven decisi­ons and policies that avoid the consumption of renewable energy. In addition, some discoms perceive the additional cost associated with integration to be very high. Consequently, only a few states ha­ve gone ahead with state-specific auctions and renewable energy procurement, and much of renewable energy development is limited to these few states.

In addition, there has been a slowdown in renewable energy due to the inherent issues related to the lack of grid infrastructure and land acquisition challenges.

There are two different viewpoints with respect to the policy of RPOs, going forward. The most commonly discussed one is the imposition of stricter penalties for non-compliance with RPOs in the draft Electricity Act. This viewpoint was reiterated by the minister of power and new and renewable energy at a recent industry ev­ent. The second viewpoint is that there should be a gradual phasing out of RPOs (not the REC mechanism), given the falling cost of renewables and the unnecessary restrictions and unjustified penalties being imposed on utilities that are already in acute financial stress.

Going forward, obligations pertaining to different renewable sources and high penalties for non-compliance are going to become the norm. However, the phasing out of this complicated regulation for all renewable sources apart from emerging segments such as green hydrogen may be more beneficial for the sector. How­ev­er, even a discussion on the possibility of it being phased out seems to be out of sight in the foreseeable future.

Flexible Fuel: Key developments in ethanol and biodiesel blending in petrol and diesel

The Indian government has been promoting the Ethanol Blended Petrol (EBP) programme, with the aim of enhancing energy security, reducing im­port dependency on fuel, saving foreign exchange, addressing environmental iss­ues and providing a fillip to […]

The US International Development Finance Corporation (DFC) has approved up to $500 million in debt financing for First Solar, the largest solar manufacturing company in the United States, subject to definitive agreements being negotiated. The […]