In the initial days, when solar photovoltaic (PV) panels were expensive, it was important to use trackers to minimise the number of panels used in a system with a given power output. With panels getting cheaper over time, the cost effectiveness of using trackers versus a greater number of panels also declined substantially. However, tracker technology is again being preferred for upcoming projects in India as developers are becoming confident of its benefits. Globally, it has emerged as a key technology trend in the solar power space.

A market report by Ganges Internationale states that the level of tracker installations in India took a significant upturn during 2014-15, leading to an increase in revenue by up to four times. It also estimated that the solar tracker market will experience significant growth in the future on account of better technology, leading to a higher and stable power output, which a fixed system will not be able to deliver.

As per report estimates, ground-mounted solar installations with trackers would exceed 4 GW by 2018, or 25-30 per cent of the total installed ground installations as against 6 per cent in 2015-16.

The cost of deploying tracker solutions is high, and adds 15-20 per cent to the total capital expenditure of the solar power plant. While single-axis trackers cost Rs 7 million-Rs 8 million per MW, dual-axis trackers add Rs 10 million-12 million per MW to the project cost. Also, tracking solutions require at least 2-3 acres more land than fixed-tilt projects, thus adding to the cost of the project. Moreover, operations and maintenance of tracker-based plants entails an additional expenditure of Rs 400,000 per MW.

The increase in generation and the success of tracker technology is dependent on several factors. For instance, trackers perform better when they are closer to the equator and are not as effective when the latitude of the location increases. Therefore, in states such as Tamil Nadu, Andhra Pradesh and Karnataka, tracker-based solar projects would perform better as compared to those located in Punjab, Rajasthan and Uttar Pradesh.

Globally, the PV tracker market has become less concentrated, with the top four vendors accounting for only 64 per cent of the total shipments in 2016, as compared to 74 per cent in 2015. According to the Global PV Tracker Landscape 2017 report published by GTM Research, Indian and Chinese vendors came to the fore in 2016 as trackers became more popular in these countries, and the market continued to globalise.

In the Asia-Pacific region, China-based Arctech Solar gained the topmost position in 2016, with a total market share of 30 per cent. This market share ratio far exceeded other manufacturers in this region.  Meanwhile, Pune-based Scorpious Trackers ranked ninth on the global list and second in Asia-Pacific.

As the solar power market is abuzz with action, a similar impact is visible in the tracker space. Domestic mounting structure players are forging partnerships with solar tracker companies from across the world. For global tracker companies, this is an opportunity to enter into the vast untapped Indian solar market, without the hassle of setting everything up from scratch.

In April 2017, Daniel Shugar, US-based solar tracker and energy storage giant NEXTracker’s chief executive officer, travelled to India. Speaking to Renewable Watch, he enumerated the company’s plan to manufacture additional structural components for its products in India. “The project plan is at the final stages of completion. We envisage an investment of $4 million-$ 5 million for the project,” said Shugar. The company is in the process of tying up with Apollo Tubes along with four other steel fabricators, which are already providing foundation piers to NEXTracker and its customers in India. 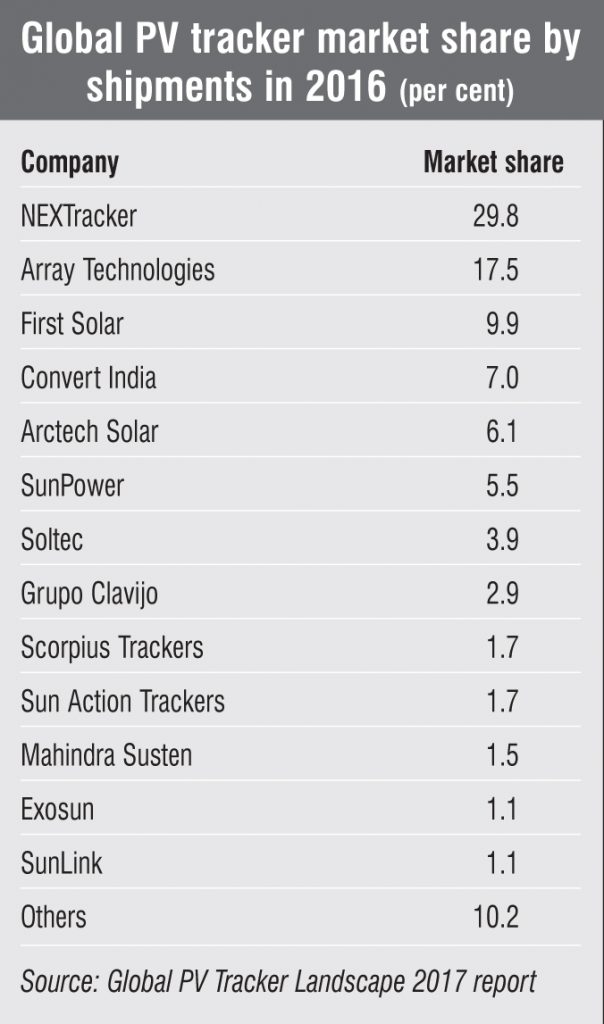 While the cost-benefit analysis has proved to be in favour of solar trackers, pushing developers to consider the adoption of this technology requires more research and development (R&D) to improve its efficiency and customise products to suit local conditions. Thus, it will be important for tracker technology providers to stay ahead in terms of innovation.

All top players in this space realise this and have invested heavily in R&D. For instance, as part of its strategy to tackle the growing competition, Arctech is planning to release its new integrated product design in mid-2017.

NEXTracker is a step ahead as it has already launched an innovative solar-plus-storage solution, NX Fusion Plus, for the US and international markets. It integrates solar trackers, batteries, inverters and software to deliver better return on investment from solar projects. By incorporating battery storage technology into its product, NEXTracker has been able to further increase the energy output and life of solar power plants, just as tracking technology did for fixed-tilt solar applications.

Meanwhile, some companies have kept the focus only on technology development and not manufacturing. A prominent example of this model is Scorpius Trackers. Since the company’s core capability is product design, it has not set up any manufacturing facility to produce trackers. It sources the required material and has strategic tie-ups with contract manufacturers that assemble finished trackers.

Going forward, the number of announcements pertaining to product innovation is expected to increase as the market heads towards greater competition and a higher efficiency level.

The Indian rooftop solar market has been growing at a brisk pace over the past two years, with the cumulative installed capacity crossing the 1 GW mark in October 2016. This growth has been driven […]

The global as well as the Indian solar market is set to grow rapidly in the coming years mainly on account of significant cost reductions in the segment, including a reduction in the cost of […]