The Indian solar growth story has been exciting so far. The sector made a modest beginning in 2009-10 by adding over 10 MW of capacity. Since then, the industry has grown rapidly to about 8.7 GW as of October 2016, adding almost 1.9 GW during the April-October 2016 period. In fact, around 45 per cent of the cumulative solar capacity in the country was added during 2015-16. This rapid growth in the installed solar capacity has been achieved on the back of falling solar tariffs, a favourable policy and regulatory regime, availability of low-cost funds and growing experience in solar project implementation.

During the past year, the solar industry continued to attract investor interest. Apart from many large domestic private corporations announcing their plans to enter the solar segment, a number of foreign players, too, made their presence felt with large targets. However, not much action was witnessed on the policy front as most states already have frameworks in place for developing solar power. Moreover, at the central level, the thrust seems to be on putting strategies together to achieve the large solar target set by the government.

In terms of tariffs, a 20 per cent decline was witnessed in the Central Electricity Regulatory Commission’s benchmark

tariff in 2016-17. Meanwhile, the tariffs discovered in auctions touched a new low of Rs 4.34 per kWh in the 130 MW tender in Rajasthan. In the subsequent auctions, the tariffs were more or less the same. Meanwhile, the solar manufacturing segment remained stagnant with no major capacity addition in this space.

As part of the ambitious solar target set in 2015, the central government is aiming to achieve 12 GW of capacity addition during 2016-17. Of this, only 1.9 GW, or 14 per cent of the overall target has been commissioned so far. While it represents the highest ever half-yearly capacity addition, it falls way short of the government’s target. However, capacity addition is likely to pick up pace in the second half of the financial year as several projects under state as well as central tenders are due for commissioning. The primary driver for capacity addition in the solar power space has been the government’s 100 GW target and the Intended Nationally Determined Commitment submitted by India at the Paris climate conference.

Interesting capacity addition patterns were seen across the country. States that led in the past such as Rajasthan and Gujarat witnessed a decline, while some of the southern states added large capacities. In 2015-16, Tamil Nadu added the highest capacity of 919 MW. It was followed by Andhra Pradesh (435 MW) and Telangana (360 MW). In the ongoing fiscal, too, Tamil Nadu (494 MW), Telangana (435 MW) and Andhra Pradesh (395 MW) are leading

capacity addition. Meanwhile, Karnataka has emerged as an attractive solar destination, having added about 195 MW of solar capacity in 2016-17 so far. Meanwhile, Gujarat, Rajasthan and Madhya Pradesh have added only 19 MW, 31 MW and 35 MW respectively. Both Gujarat and Madhya Pradesh are power surplus states and thus have slowed down their renewable energy programmes. Rajasthan, on the other hand, faces issues pertaining to financially strained discoms and inadequate transmission infrastructure.

In the solar rooftop segment, the cumulative installed capacity reached 740 MW in March 2016. Industrial and commercial consumers continued to dominate the segment, making up almost 73 per cent of the market. The need for cheaper electricity, carbon emission reduction and compliance with renewable purchase obligations have been the key drivers of capacity addition in the segment. The residential segment is slowly picking up pace with the issuance of net metering policies across major states. The improving cost economics of rooftop solar projects is also encouraging residential consumers to install rooftop solar systems on their premises. 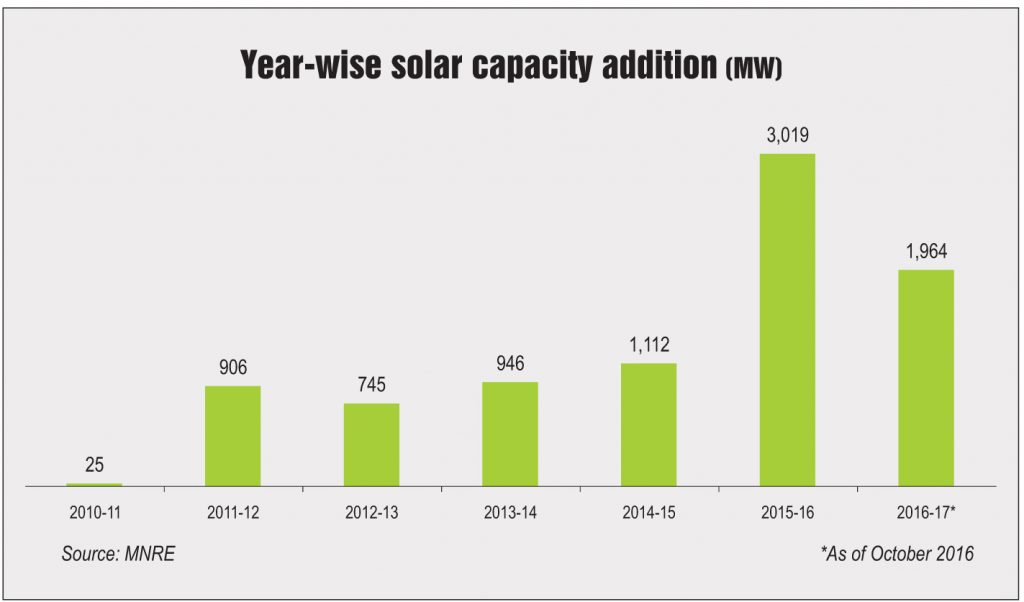 State of the manufacturing sector

While India represents one of the fastest growing solar markets in the world, the country’s solar industry continues to be dominated by foreign suppliers, mainly Chinese manufacturers that have priced their products aggressively to create intense competition. In the face of tough competition, a number of Indian solar manufacturers have gone bankrupt. This has led most solar manufacturers to venture into the engineering, procurement and construction (EPC) business, indicating a trend towards forward integration.

Adani Enterprises also made a significant announcement to invest $2 billion in setting up a solar panel and solar photovoltaic (PV) cell manufacturing facility. The company has recently received approval from the Gujarat government to begin works on the solar power equipment manufacturing plant. Adani Enterprises has set up a special purpose vehicle, Mundra Solar PV Limited, for the project, which will be developed over a three-year period. The plant will produce polysilicon, wafers, cells and modules. Work on the first phase of the project has started and is expected to be commissioned by March 2017. 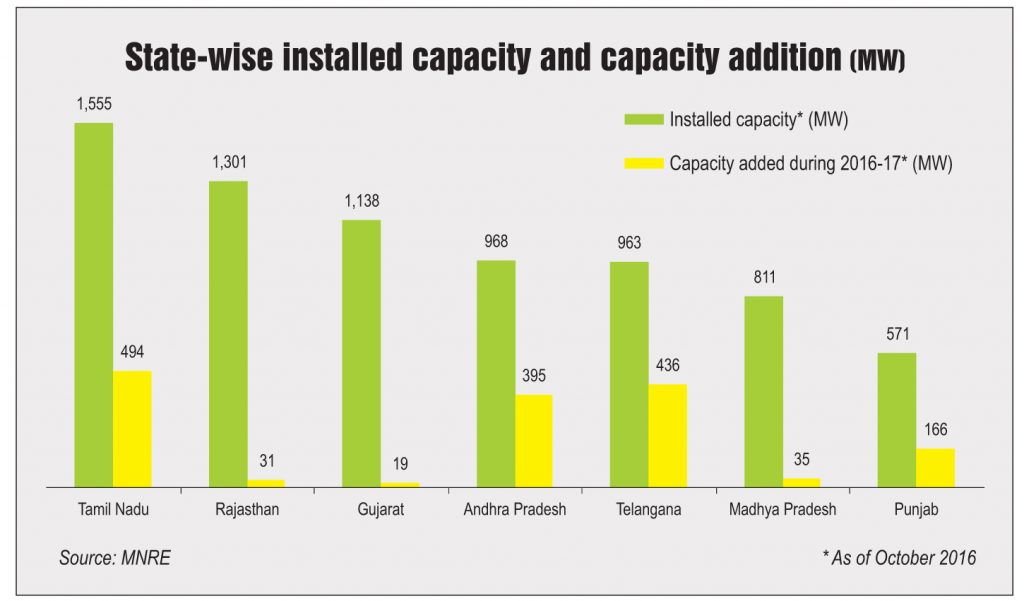 Despite government efforts to revive domestic manufacturing, smaller players continue to face several challenges. These include limited availability of finance at reasonable terms and the poor quality of power available to solar fabrication units. The government needs to promote large manufacturing zones to boost local manufacturers and revive the existing capacity that is lying idle. Financial support in terms of interest subsidy, working capital subsidy and tax holidays can be explored to give fresh impetus to the segment. Apart from this, the production of semiconductors needs to be encouraged to ensure the development of an integrated manufacturing base.

Meanwhile, the trend of wind power developers investing in solar is picking pace. For instance, Suzlon, a pioneer in the Indian wind energy sector, has contracted a solar pipeline of 550 MW in its first year of operation as a solar power developer. CLP India, another large wind player, has tied up with Suzlon to develop 100 MW of solar projects in Telangana. Ostro Energy, a wind energy platform backed by private equity firm Actis, has also entered into a joint venture with Suzlon for developing 50 MW of solar plants in Telangana. 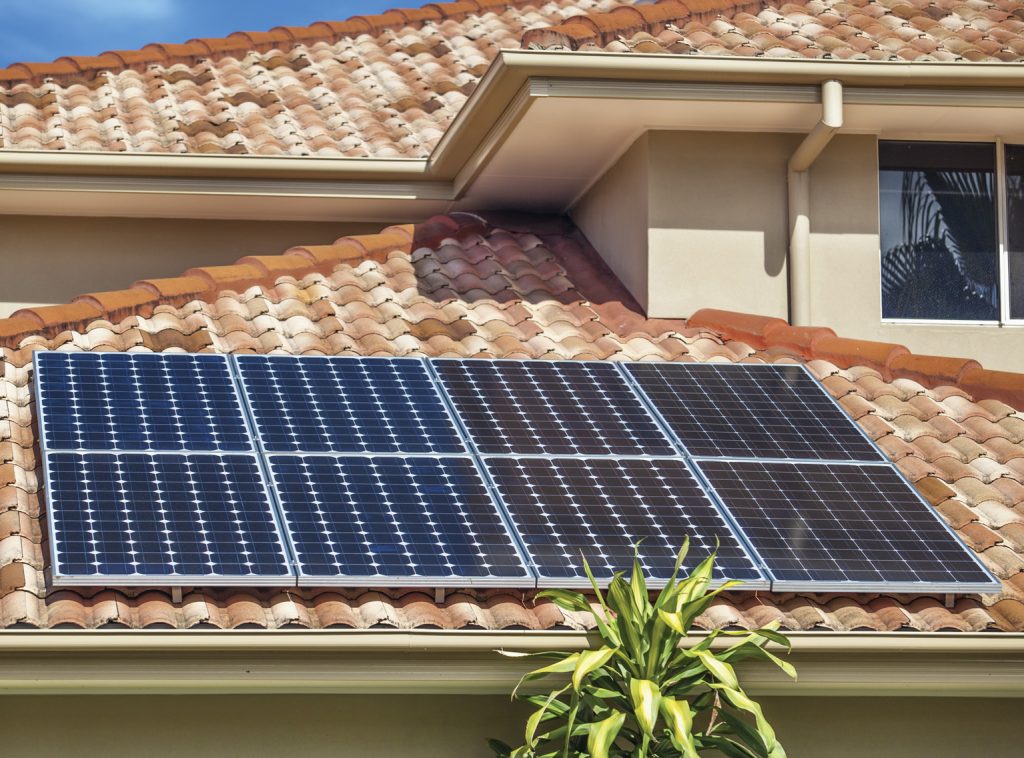 Despite the significant progress that the solar power industry has achieved, there are persistent challenges that can act as possible roadblocks to the sector’s future growth. Some of these have been discussed below: 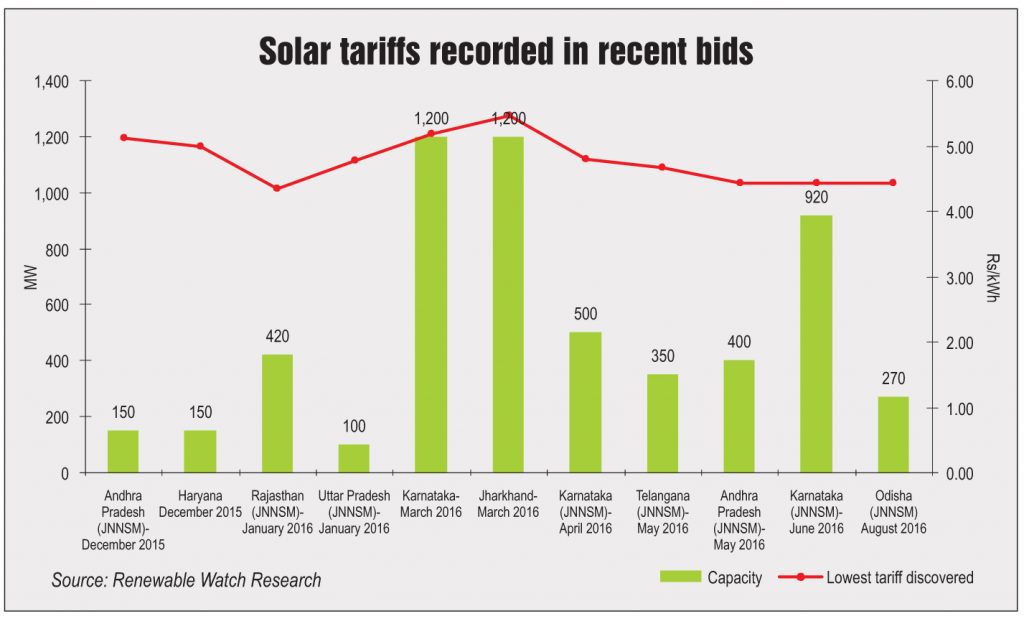 The above-mentioned challenges will need to be adequately addressed to ensure that the solar power industry continues on its growth path. For 2016-17, the government has set a target of 12 GW, of which only 1.9 GW has been commissioned. Thus, there is still a lot of ground to be covered this year, which requires active involvement of the industry along with government initiatives. The tendering process for utility-scale projects is under way with more than 4.1 GW of capacity awarded under the Jawaharlal Nehru National Solar Mission during the past year. A large part of this capacity is due for commissioning by March 2017.

The rooftop segment is likely to get a greater boost from various policy and regulatory actions being undertaken. In the ongoing phase of its rooftop solar programme, the Solar Energy Corporation of India has already awarded 70 MW of tenders and tendering for an additional 500 MW is under way. Another key area of demand in this segment is likely to be the government’s programme of installing 5,000 MW of rooftop solar projects on government buildings over the next five years. States are also playing an enabling role. While Karnataka has issued tenders for developing 160 MW of rooftop solar projects on state warehouses, the Haryana and Chandigarh governments have put in place mandatory rooftop solar installation policies to encourage uptake. However, as per BRIDGE TO INDIA estimates, rooftop solar capacity is likely to reach only 15 GW by 2022, against the target of 40 GW set by the central government.

Meanwhile, according to ICF International, additional avenues for cost reduction will arise for solar developers. Based on ICF’s analysis, a developer in India (with an equity hurdle rate of 15 per cent) can comfortably quote a tariff of Rs 5.25-Rs 5.35 per kWh. However, there is scope for further reduction in this tariff with the optimisation of module prices, capacity utilisation factor, cost of debt, and the internal rate of return. In addition, developers and financiers can explore innovative financing structures that can bring down the cost of debt, thereby reducing the upfront equity requirement leading to better returns. Further, strategic tie-ups between module suppliers and developers can help reduce risks and module costs. Meanwhile, the government can adopt alternative tariff models to help developers further bring down tariffs.

Going forward, falling tariffs will be instrumental in increasing solar power uptake among discoms in India and promoting overall growth in the segment. The government should also look at setting up large-scale integrated PV manufacturing capacity to meet the growing demand for cells and modules at competitive prices to spur growth across the solar value chain. Overall, the outlook for the sector remains positive with large capacity additions expected in the coming year.