The traditional belief that conventional power based on fuels such as coal and natural gas is cheaper than renewable energy is proving to be fallacious. With technology advancements, grid improvements to handle intermittent sources of energy and an increase in the installed capacity base, renewables are increasingly becoming cost competitive vis-à-vis their conventional counterparts in many parts of the world.

A combination of various factors such as the transportation costs of conventional fuels (coal, natural gas, etc.), labour and grid infrastructure, government subsidies and the degree of availability of the renewable source (solar, wind, small-hydro, bio- mass, etc.) determine which resource is best suited to a particular site. The levellised cost of electricity (LCOE), which represents the per kWh cost of building and operating a generating plant over its financial life and duty cycle, has gone up significantly for coal-based generation, which accounts for over 60 per cent of the global installed power capacity. In comparison, over the past few years, theLCOE for solar photovoltaic (PV) and onshore wind plants has reduced sharply with financial support from the government, which has encouraged their rapid development, leading to a decrease in manufacturing costs and an increase in the efficiency of these technologies.

According to Bloomberg New Energy Finance’s (BNEF) estimates, the LCOE for onshore wind projects has declined by 18 per cent from mid-2009 to mid- 2013. The lowest LCOE for onshore wind can be found in India, particularly in higher wind resource areas such as Karnataka and Tamil Nadu, where plant load factors may exceed 33 per cent andproject capex may drop below $1.1 million per MW, resulting in an LCOE of less than $50 per MWh. In the case of solar, a consistent decline in the cost of modules and underlying components has reduced the LCOE, especially in markets dominated by Chinese suppliers and where the cost of financing has become cheaper. Further, the LCOE for solar PV projects in states like Gujarat and Rajasthan is as low as $80 per MWh.

A more realistic cost comparison can be made between the coal-based energy and solar PV and wind power by considering the tariffs determined for new coal- based power plants and solar PV projects through competitive bidding and feed-intariffs (FiTs) offered for wind power.

The increasing cost of coal-based power generation is reflected in the higher tariffsbeing quoted by developers for setting up new plants. In the last one year, states including Uttar Pradesh, Maharashtra, Andhra Pradesh, Karnataka, Tamil Nadu and Rajasthan have invited bids for long- term power procurement through the Case I bidding route. Most of the bids have been around or upwards of Rs 4 per kWh. The bidding in Uttar Pradesh saw tariffs in the range of Rs 5 to Rs 6 per kWh. In Rajasthan too, the state’s invitation for tariff quotes under the Case I bidding process witnessed similar results, as most of the quoted tariffs were close to Rs 5 per unit, while a few, such as those of Jindal and LancoAmarkantak, stood at Rs 6.04 per kWh and Rs 7.11 per kWh respectively. This is a sharp increase from the average quoted price of Rs 2.53 per unit in 2006-07 and Rs 2.50-Rs 3.00 per kWh in 2010-11. Such high bids reflect the growing risk premium associated with coal prices and availability.

Further, these bids indicate that wind power has already become cost competitive in states like Tamil Nadu and Karnataka where the current FiT for wind is Rs 3.51 per kWh and Rs 4.20 per kWh respectively.

According to 2012 BNEF data, the LCOE for wind power projects at good wind sites was in the range of Rs 2.70 per kWh to Rs 4.40 per kWh as compared to the LCOE for coal, which stood at Rs 1.90-Rs 4.80 per kWh. With an annual increase of about 10 per cent in coal prices since 2012, the LCOE for coal has certainly surpassed that of wind power.

Meanwhile, based on forecasts by various agencies, domestic coal prices can be expected to continue to increase in line with the historical rate of increase in prices and the cushion provided by the considerable differential in landed prices of inter- national coal. This implies that wind power is likely to reach grid parity in many other states like Andhra Pradesh, Maharashtra and Rajasthan.

While coal is the dominant source in India’s power mix, gas-based power also comprises a significant share. However, this resource is also becoming more expensive by the day. The implementation of a revised price determination formula, which was recently endorsed by the government, will double gas prices from the existing level of $4.20-$5.75 per million metric British thermal unit (mmBtu) (ex- wellhead) to $8.4 per mmBtu in the first quarter of 2014-15. The price of gas could increase further as select gas supply contracts have provisions to link prices fully with crude oil.

Decentralised solar an attractive option in scarcely populated areas
There is a strong correlation betweenpower consumption and the GDP of the country. According to a FICCI report, power shortages currently cost India a GDP loss of $68 billion, which accounts for 0.4 per cent of the total GDP. Transmission bottlenecks are a key reason for these shortages. Since demand and generation capacity are both expected to increase in the future, transmission constraints need to be addressed urgently. However, the cost of transmission can be extremely high in the case of scarcely populated and remote regions. Further, taking into account the average aggregate technical and commercial losses of 26-27 per cent in 2013-14, setting up power plants that are located at a distance from the source of consumption is not economical. In this regard, the most viable solution is the decentralisation of solar power. For instance, in the Andaman & Nicobar Islands or at scarcely populated sites where grid infrastructure has not been set up and the power demand is not very high, the cost of installing a solar PV-based plant will prove to be more economical.

While solar energy has already become a popular source of generation in off-grid areas, it is emerging as a feasible solution in grid-connected areas as well, where the cost of delivery of power is significantly high or where there is high dependence on diesel-based generation. Industrial consumers have been the early adopters of these systems as grid power tariffs for this consumer category are extremely high.

According to consultancy firm BRIDGE TO INDIA, the LCOE for diesel-based generation ranged from Rs 12 per kWh to Rs 18 per kWh (significantly more for re- mote sites) and the grid commercial and industrial tariffs were as high as Rs 9 per kWh. As compared to this, the LCOE of solar power is around Rs 8 per kWh for PV systems without storage facilities.

Technology advancements related to the storage of solar power may play a key role in addressing this challenge. In fact, several companies are already working on developing solutions that can intelligently manage various sources of power as per consumers’ load requirement. Germany- based inverter manufacturer SMA has launched its Fuel Saver product for the Indian market, which is said to be economically viable for project sizes greater than 500 kWp. While other companies with similar offerings in the international market are also looking to launch their products in India, new entrants are undertaking various innovations to develop similar products. 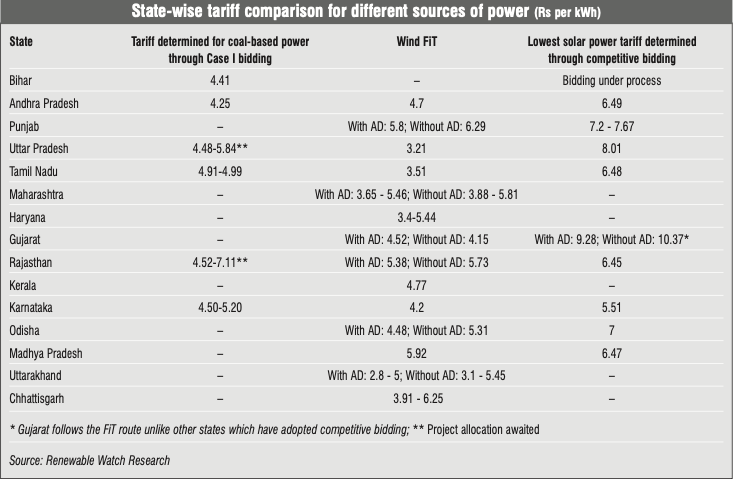 There are three main cost components for any energy source – the initial installation or construction costs, operating and maintenance (O&M) costs and fuel costs.

Regulatory commissions do not consider the hidden subsidies and the cost of externalities while determining tariffs for various fuels. Several research firms have concluded that the actual price of conventional power comprises various hid- den costs. Moreover, as environmental externalities of fossil fuels are being quantified globally, a new cost component has come to be associated with conventional power, thereby making renewable power an attractive alternative.

A research study by the World Institute of Sustainable Energy found that coal- based power already enjoys an average hidden cost of Re 0.68 per kWh. This does not include subsidies provided for the transportation of coal. Based on inter- nationally accepted norms of quantifying externalities, the best estimate of externality cost of coal power would be Rs 8.92 per kWh. When these two (subsidies and cost of externalities) are added, the real cost of coal-based power in India could stand at Rs 12.75 per kWh for domestic coal and Rs 14.83 per kWh for imported coal-based power.

Considering these cost levels, solar power has also become competitive with coal-based power in India. Solar energy is “top-heavy” – the initial costs are quite high but there are negligible O&M costs and zero fuel costs.

Since the introduction of competitive bidding for solar project allocation in 2010, the average winning tariff bids witnessed a significant decline when the first batch of projects under the Jawaharlal Nehru National Solar Mission (JNNSM) Phase I were allocated. The average winning bid for solar PV projects under Batch I of JNNSM Phase I, conducted in February 2010, was Rs 12.25 per kWh. It reduced to Rs 8.77 per kWh in the Batch II bidding process, which was held in February 2011. The average tariff further reduced to Rs 8.34 per kWh in Karnataka (Phase I bidding) in August 2011, Rs 8.05 in Madhya Pradesh in May 2012 and Rs 7.59 per kWh in Rajasthan in November 2012. A further decline in tariffs was witnessed in Phase II bidding in Karnataka (Rs 6.50 per kWh).

Meanwhile, on the basis of Re 0.68 per kWh of hidden subsidies and the current installed capacity of coal-based power plants, the total hidden subsidy estimated for this energy source in India would beRs 551 billion per year. This is a considerable amount given that the average annual investment required to meet the JNNSM target of 22 GW of solar power capacity between 2010 and 2020 is estimated to be Rs 180 billion. 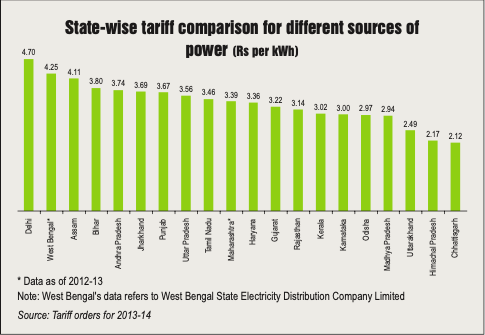 The aforementioned trends clearly indicate that there is a serious need to review the country’s long-term power sector policies against the backdrop of the uncertainty in conventional fuel supply and an increasing trend in domestic fuel prices. In this regard, there is an urgent need to resolve the issues related to pricing of renewable energy certificates (RECs), which will act as a market driver for renewables-based power across verticals. Besides, as coal and natural gas prices continue to rise, resulting in an increase in power procurement costs, utilities will be compelled to switch to buying cheaper renewable energy.

With the changing cost competitiveness of various sources of power, many countries have revamped their long-term power mix targets to include a greater share of renewable energy. According to World Energy Perspective: Cost of Energy Technologies, a report by the World Energy Council and BNEF, the fast- changing economics imply that renewables will represent 34 per cent of the global installed capacity by 2030. The report states that many clean energy technologies are already cost competitive with fossil fuels and are only getting cheaper as a result of which fossil fuels’ slice of the world energy pie is projected to decline further from 67 per cent in 2012 to 40-45 per cent in 2030.

Going forward, there is a need for the industry to enhance its focus on research and development (R&D) to achieve efficiency improvements, cost reductions and technology maturity, especially with regard to storage solutions. Further, greater importance should be accorded to improvements in grid infrastructure as generation costs may be the biggest driver today, but will not remain so in the future. According to Anish De, chief executive officer, Asia, Mercados EMI, “Grid integration will be the key issue and the extent of variable output renewable energy deployed would depend on absorption and integration capabilities.”

The energy revolution will involve a gradual transition to renewable energy. Thermal- and gas-based power plants will remain the mainstay of the country’s power mix for several decades, but the industry has to steadily increase its investments in renewable energy on all fronts, including capacity addition, R&D and grid infrastructure.