India aims to increase the non-fossil fuel-based installed capacity to 500 GW by 2030. As of October 31, 2022, the installed capacity in the country stood at 409 GW, including 166 GW of renewa­ble capacity (including large hydro), whi­ch is about 40 per cent of the total ins­tall­ed capacity. 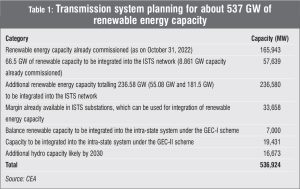 In the report, the transmission system has been planned for major renewable energy potential zones including Leh renewable energy park in Ladakh; Fatehgarh, Bha­d­la, Bikaner in Rajasthan; Khavda renewa­ble energy park in Gujarat; Anantapur and Kurnool renewable energy zones in Andh­ra Pradesh; and offshore wind farms in Tamil Nadu and Gujarat. The installed re­newable energy capacity target of 175 GW by 2022 comprises 66.5 GW of rene­wable capacity to be connected to the ISTS network. Part of the transmission sy­s­tem for this capacity has been commissioned (12.9 GW) and the rest is under construction (19.1 GW, slated for commissioning between December 2022 and Nov­ember 2023), under tendering (8 GW), to be taken up for bidding (10.5 GW) and at various stages of planning. 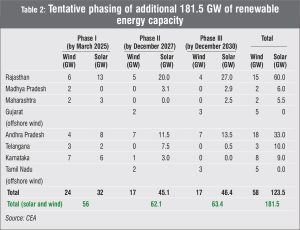 The transmission schemes have been planned considering energy storage, so as to meet the requirement of round-the-clock (RTC) power. Several HVDC transmission corridors have also been planned for the evacuation of power from large renewable energy potential zones. It has been estimated that 50,890 ckt. km and 433,575 MVA is the additional requirement of transmission lines and substation capacity respectively, planned under the ISTS for integrating additional wind and solar capacity by 2030. The capacity-wise tentative additional ckt. km and MVA ca­pacity are provided in Table 3.

Going forward, for the development of the planned transmission schemes, the government may provide some central financial assistance and low-cost financing from multilateral agencies in line with the Green Energy Corridors (GEC) scheme. Under the GEC-I scheme, about 24 GW of renewable energy capacity was planned to be integrated with the intra-state network, of which about 7 GW is to be commissioned by March 2023.

Post the launch of the report, some industry observers have expressed reservations over its successful implementation given the right-of-way issues that continue to ex­ist, leading to project delays and cost overruns. According to some, aggressive bidding for transmission projects makes such projects unviable. Some stakeholders have an interesting observation. While the government aims to deploy 30 GW of offshore wind capacity by 2030, the report plans for 10 GW of offshore wind capacity (5 GW each for Gujarat and Tamil Nadu).

However, despite these reservations, the release of the detailed report on transmission infrastructure for evacuation of renewables is a positive development given that this has been seen as a major hurdle in scaling up renewables. The gestation period of transmission projects is typically much longer than that of renewable energy projects, leading to delays in the commissioning of solar and wind assets, bid postponements and, in some cases, stranded assets. Thus, this report provides the mu­ch-needed roadmap for transmission ca­pa­city development, which will help transport the targeted solar and wind power to load centres and bring the country closer to its clean energy mix goals.

RPO and ESO upto 2030 notified by the Ministry of Power

The Ministry of Power (MoP) has notified the renewable purchase obligation (RPO) and energy storage obligation (ESO) upto fiscal year 2029-2030. According to this order, total prescribed RPO will progressively increase from 24.61 per cent in 2022-23 […]

Senvion India: Rapid strides in a short span of time

With its conducive business environment, the Indian renewable energy market is increasingly attracting domestic and international players to invest in its promising future. In the wake of growing consolidation, German wind energy company Senvion GmbH […]

The UK Government has authorised an agreement between Octopus Energy and Bulb’s special administrators, in which Octopus will purchase 1.5 million of Bulb’s customers. After an extensive and competitive sale procedure, Bulb’s administrators completed the […]