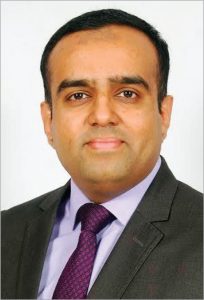 From an energy product firm in 1947 to a fully diversified energy group in 2022, the journey of India-based infrastructure major Jakson Group has spanned the fields of distributed energy, solar, battery energy storage systems and EPC over 75 years. The group has forayed into a number of green energy-related businesses over the last two decades, chiefly noticeable among which are its successes with solar module manufacturing, solar IPP, solar EPC and distributed battery energy storage areas within the renewable space. Recently, the group has carved out all of its green initiatives under a new venture, Jakson Green, a platform that focusses on the EPC, asset development and asset management of renewable energy projects including solar, utility-scale storage, renewable hybrids, waste-to-energy (WtE), fuel cells, green hydrogen and green ammonia; besides its plans for manufacturing of electrolysers in India. In an interview with Rene­wable Watch, Vish Iyer, Global Chief Commercial Officer, Jakson Green, shares the plans of the new venture and his thoughts on the sector. Edited excerpts…

What is the motivation behind starting Jakson Green?

Jakson Green plans to deliver 10 GW of renewable energy assets by 2025 and 20 GW by 2030. The firm plans to enter the electrolyser manufacturing space, besi­d­es building and operating green hydrogen/green ammonia assets globally. This is in line with its vision of being a Power-to-X player, producing over half a million to­n­nes per annum of green hydrogen and ammonia by 2030.

Our focus shall be largely on new energy transition areas such as green hydrogen, gr­een ammonia, renewable natural gas and other derivatives, keeping solar EPC as the anchor business. Since the green hy­drogen market is at a nascent stage, we are also playing a market-moving role as an  early-stage developer of green hy­d­ro­g­en projects on which we can work with a nu­­mber of partners who could be either IHPs or end users. We are already receiving early interest from a range of investors who are eager to partner with us for initial pro­jects in this space. On the solar side, for a specific set of clients, sp­e­cifically financial investors who do not have developme­nt teams in-house, we may consider donn­ing the developer cum EPC hat selectively.

What are your plans in the WtE segment?

We are presently working on a food waste-to-CNG project of 250 tonnes per day capacity, which will be set up in south  India. The potential for bio-CNG in India is immense, given that the government has announced commendable measures th­rou­gh the new biomass policy. We belie­ve, if  the feedstock issues are solved, this segment can provide better re­turns than plain vanilla renewable energy projects. In addition, the challenge of offtake is much less in this segment thanks to existing demand from blue-chip corporates and PSUs including GAIL, IOCL, HPCL showing interest.

What are your plans for green hydrogen?

At present, we are working on a few pilot projects in the green hydrogen sp­a­ce. Of these, some are being delivered under the turnkey EPC model and some under the build-own-operate op­ex model. These are decentralised proje­c­ts developed to meet the captive req­uire­ments of industries. As the production of green     hydrogen is close to the point of con­su­m­p­tion in such projects, it helps us avo­id logistics issues.

Which electrolyser technology have you chosen and what is the reason for selecting that particular technology?

In our pilot projects we are broadly using both PEM and alkaline technologies. Whi­le alkaline is a tried- and -tested  technology,  others like PEM, AEM and a host of other emerging technologies are the su­b­ject of extensive discussion, and are also undergoing initial deployments. From an indigenisation standpoint, alkaline looks best suited for India as we aspire to manufacture electrolysers in the near term.

Which type of C&I clients have you partnered with for your green hydrogen pilots?

These clients are spread across the petrochemical, ste­el, oil refineries and fertiliser segments. Go­ing forward, we aim to ex­plore the un­tap­p­ed C & I  potential for distributed ammonia across the entire processing industry, from foods to chemicals.

What are your organisation’s plans in the green ammonia space?

Our large-scale project announcements have been primarily focused on green am­monia. Jakson Green and the Raja­sthan government recently signed an MOU in October 2022 to build a green ammonia project in the state. We are evaluating de­ve­lopment of a 15,000 tonnes per an­num green ammonia plant in the first ph­ase along with an integrated hybrid re­ne­wable power complex, thereafter expanding further across phases. While we are also de­veloping a pipeline of similar early stage projects across other states in India, we are also pursuing opportunities globally. Besides, we are also looking at some interesting decentralised requirements for gr­een ammonia plants across the country.

Are the inputs used in your projects locally produced or imported?

For the two technologies that are more commonly in use currently, that is alkaline and PEM, the dependence is more on imports, especially for stacks and membranes. However, for the alkaline electrolyser our aspiration is for maximum indigenisation enabling us to provide Made in India products for green hydrogen projects around the world.

What are the organisation’s key industry collaborations and partnerships?

As we speak, we are coming up with our own market-ready alkaline technology and will make related announcements at an appropriate time. While we may be de­pendent on import of stacks initially, the aim is to  have near complete indigenisation of the supply  chain over the next few years. Within the PEM technology space, we are exploring partnerships with established players and startups alike. On the financing side, we have received early in­terest from thematic bluechip institutional investors who are keen to partner with us on a variety of initial projects within the new energy transition space, be it green hydrogen/green ammonia  or renewable natural gas projects.

Do you have a manufacturing facility available for electrolysers?

We have already earmarked capex for our upcoming gigafactory in India to manufacture alkaline electrolysers. Most likely, it will be either at Noida, where the group already produces solar modules, or at a facility in Pune, where the group manufactures other energy products.

What are the key operational challenges that you are facing in your pilot projects?

We have observed the offtake contracts to be a key challenge in the green hydrogen segment. Many projects being planned are increasingly finding it difficult to sell the green hydrogen produced. Also, there are operational challenges related to putting in place the logistics to move the molecules, especially with respect to storage, transportation and liquification. While an IHP may produce green hydrogen at a competitive price, there is a good chance that the additional cost of logistics involved might at times make it less competitive.

What is the price at which you are planning to sell green hydrogen going forward?

There are a range of prices that work for projects, which are influenced in turn by several factors such as input power costs. Broadly, the market would hinge around a benchmark that clients and investors are comfortable with, such as commodity co­n­tra­cts for gas, urea and other molecules. While prices are becoming competitive for green hydrogen through electrolysis vis-à-vis grey hydrogen, we are working on a unique gasification technology that can produce decentralised green hydrogen at $3-$4 per kg.

How will the profit margins of the green hydrogen business compare with those of your traditional renewables business?

Green hydrogen business is a high multiple new energy business with decent pot­ential for profits as compared to traditional renewable energy. Projects being developed at an early stage of the industry co­uld command respectful premiums whi­le providing upsides for investors. This is also the rea­son why a set of pure developers, besi­d­es IHPs are active in this space and are launching initial projects. As the segment matures just as we saw in oth­er green energies, it is expected that more utilities will enter this space and retur­ns would co­mpress. However, as of today, we expect the hydrogen space to command at least mid-to-high teens returns across developing markets.

What are your key suggestions to the government?

Currently, SECI is planning to pool the aggregate demand for hydrogen and am­monia in the market and come out with  tenders for supply from IHPs. On a similar note, since the government is also invol­v­ed  in power trading, they could also consider creating a commodity trading vertical within the state and central power tra­ding agencies. Creation of a large bankable wholesale market will help green hy­drogen/green ammonia space enter ho­ck­ey-stick growth territory. There could al­so be potential demand aggregation and market creation using gas exchanges of India and perhaps GAIL can play a transformational role in establishing infrastructure for the molecule transportation.

Further, on the policy front, a piecemeal approach will not help grow this segment. We saw that in a span of four to five months in 2022, from practically nothing, the US emerged as one of the largest green hydrogen/green ammonia leaders globally. This has been on the back of one single legislation – the Inflation Reduction Act, 2022. Our earnest request to Indian policymakers across the spectrum would be to quickly come out with the national hydrogen policy on the lines of the US IRA or risk making the exports of Indian green hydrogen/green ammonia uncompetitive in the long run.

Lastly, while the planned production-link­ed incentive scheme for electrolysers is a positive step towards localisation of supply chains for electrolysers, the government would do well to implement rules to ensure we have a fair shot at making India the electrolyser hub for the world.

DCM Shriram has agreed to source 50 MW of renewable energy from ReNew Power for its manufacturing facility situated in Bharuch, Gujarat. The companies have signed captive power agreements (CPAs) to supply 50 MW of […]

India recently crossed the 100 GW milestone for installed renewable energy capacity. This has been made possible through a progressive policy framework and enabling regulations at the central and state levels. However, the country still […]

Hydrogen Hope: India explores the potential and scope of the technology

The use of hydrogen for industrial purposes is common in India. It is already being produced and consumed by the petroleum, chemical, glass, semiconductor and food processing industries. However, most of the hydrogen consumed in […]