In India, most of the power is generated by coal-based thermal power plants (TPPs). Thermal-based generation gives rise to carbon emissions, sulphur oxide and nitrogen oxide (NOx) emissions, along with suspended particulate matter, thereby polluting the environment. As per the Paris Agreement 2015, India is now prepared to march ahead towards zero-carbon emissions through the penetration of renewable energy into the national grid.

Stubble burning by farmers also plays a major role in air pollution across the country. The air pollution level rises after the kh­a­rif harvest season in autumn and winter, especially in the National Capital Region. To keep a check on the rapid depletion of coal reserves, the use of biomass is gaining importance along with solar, wind and hydropower generation. Given this background, there is an increasing focus on bio­mass co-firing in coal-based TPPs.

What is biomass co-firing?

Biomass co-firing is the practice of substituting a part of the fuel with biomass in th­ermal plants. Biomass is added as a partial substitute fuel in high efficiency coal boilers. Coal and biomass are combusted together in boilers that have been desig­ned to burn coal. For this purpose, the existing coal-based power plant has to be partly reconstructed and retrofitted. Co-firing is an option to convert biomass into electricity in an efficient and clean way and to reduce the greenhouse gas (GHG) emissions of the power plant.

The Ministry of Power (MoP) issued the Po­licy of Biomass Utilisation for Power Ge­ne­ration through Co-firing in Pulverised Coal-Fired Boilers in November 2017, requiring generating utilities to use a 5-10 per cent blend of biomass pellets of agro-residue along with coal.

Later, in October 2021, the MoP modified the policy, wherein it was stated that coal-fired TPPs in India must mandatorily co-fire biomass with coal in their power plan­ts. Biomass co-firing gained pace after the announcement in the Union Budget 2022, mandating 5-10 per cent co-firing at every TPP in the country.

With the objective of promoting technologies for optimum use of the country’s biomass resources for grid power generation, a national mission called SAMAR­TH (Sus­tainable Agrarian Mission on use of Agro-residue in TPPs) has been set up by the MoP. The standard operating procedures for biomass pellet co-firing have already been established by the mission for handling, storage and blending of biomass.

Availability, transportation and storage of biomass

At present, biomass pellets are not easily available in the market in bulk quantity. Around 95,000-96,000 tonnes of biomass pellets are required per day for co-firing, but India’s pellet manufacturing capacity is 7,000 tonnes per day at present, de­spite a surplus of 228 million tonnes (mt) of agricultural residue available in the country. This is because pellet suppliers prefer selling their products to the textile, food processing and metal-based industries or in the open market at Rs 12-Rs 13 per kg (even higher in some states) instead of supplying it to TPPs, which offer a price of around Rs 8-Rs 9 per kg. In 2021, NTPC-Dadri procured these pellets at Rs 5.35 per kg. This huge gap is due to the seasonal availability and unreliable supply of biomass pellets to the utility. 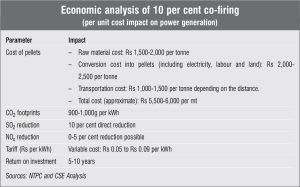 The biomass pellet must be stored in a dry place and water should not be in contact with the pellet before it reaches the mill. Only pellets with up to 14 per cent of moisture can be used for combustion along with coal. Ensuring biomass quality is key as dust and moisture can affect pl­ant operation. Regular cleaning is requir­ed to remove choking in the plant caused by the dust in the fuel.

Factors affecting biomass pricing and ways to stabilise it

The price matrix is governed by real-time and static factors, which include:

The following are the ways to stabilise biomass pricing:

Biomass co-firing is a globally accepted, cost-effective method for decarbonising a coal fleet. India is a country where biomass is usually burnt in fields. Biomass co-firing is an effective way of curbing emissions from open burning of crop residue. It also decarbonises the process of electricity ge­neration using coal, as substituting 5-7 per cent of coal with biomass in coal-bas­ed po­wer plants can save 38 mt of carbon dioxide (CO2) emissions. It can help cut em­issions from the combustion of fossil fuels, address India’s burgeoning problem of farm stubble burning to some extent, and reduce the waste burden, while also creating jobs in rural areas. India has large biomass availability which can aid its rapid growth in coal-fired capacity. 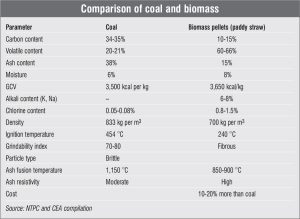 Biomass co-firing has been recognised by the United Nations Framework Con­ve­ntion on Climate Change as a technology to mitigate GHG emissions. It directly reduces CO2 emissions equivalent to the coal it replaces. The net CO2 emissions from biomass co-firing are approximately 2,300 kg per tonne. Biomass co-firing also enables coal plants to reduce sulphur dioxide (SO2) emissions as biofuels contain less sulphur than coal. In addition, biofuels also tend to contain less nitrogen and more moisture, which leads to lower NOx emissions. Furthermore, bio­­fuels have higher volatile matter content than coal, which results in less NOx formation in low NOx burners. Moreover, it reduces the carbon footprint and re­duces depletion of coal resources in the country by shifting to alternative sources of generation.

Other disadvantages include reduced heat absorption in furnace, higher excess air and slight reduction in boiler efficiency. Some biomass materials such as straw have low bulk density resulting in large storage area. In addition, moisture content may be high, reducing the overall plant efficiency. A closed shed is required for storage as biomass is hydrophilic in na­ture. It is also prone to fire hazard due to high vol­atile matter, hence, demanding special care. Depending on the feedsto­ck, the co­mplexity of fuel feeding requirements may be increased; some materials can be co-fed using a single feed system, whereas others require a separate, dedicated system.

The cost of biomass is 10-20 per cent higher than that of coal for biomass co-firing up to 5-10 per cent. At higher co-firing ratios, the cost may be higher since longer biom­ass supply chains need to be maintained.

Coal plants have been dealing with emissions by incorporating renewables and biomass co-firing is a cost-effective app­roach to reduce CO2 emissions with minimal investment.

However, tough competition from other renewables such as solar and wind is also proving to be a bane for biomass-based power. The focus is more towards solar po­wer as its generation cost is coming down (Rs 2.25-Rs 2.50 per unit) because of the reducing cost of photovoltaic technology and batteries, but in the case of biomass, the cost is increasing (Rs 8 per unit) and distribution companies are reluctant to buy at such a high rate.

Therefore, viability gap funding should be given to discoms to sustain these biomass plants. The MoP should make provisions for tariff determination and scheduling to promote generation through co-firing. Also, the mission team, with speci­a­lised members of central and state gencos’ engineers, should first study government and private plants, and suggest mo­dification/retrofits needed and then assist in implementation. Also, there is a need to ensure the availability of pellets for the next 10 years so that payback can be achieved.

It is not just the high cost of generation and competition that is a matter of concern but also the storage, collection and transportation chain of biomass, rendering them useless for co-firing. Thus, the Ministry of En­vironment, Forest and Climate Change, the MoP and other concerned agencies shou­ld promote torrefied pellet manufacturing, which can be a game changer for biomass co-firing in India.

The need of the hour is to increase India’s pellet manufacturing capability, in order to augment biomass use in power gener­ation. Specifically for Rajasthan, the major agro biomass surplus available is 15.3 mmt. Priority is given to biomass-based power plants, which have a requirement of 11.26 mmt, which leaves only 3.74 mmt biomass availability for state TPPs that have a requirement of 12 mmt. Rajasthan Vidyut Utpadan Nigam Limited (RUVNL), on behalf of discoms, has already entered into power purchase agreements for setting up biomass-based power plants of 119 MW, which are expected to be commissioned in the next two years. Hence, there will be very little biomass fuel left for co-firing in state TPPs.

Going forward, platforms need to be established to ensure farmers have an intrinsic role in the business model of pellet manufacturing and co-firing in power plants.

To exploit the co-firing potential without any adverse environmental impact, emer­ging economies need technology and policy pre­paration. Sustainability indicators for bioenergy, including protection of soil and water resources, biodiversity, land allocation and tenure, and food prices also need to be integrated into policy measures.

(The article is an edited excerpt of a longer article shared by the author.)

In the past few years, Andhra Pradesh has established itself as one of the leading states in terms of renewable energy development. It is also promoting hybrid and integrated projects. In an interview with Renewable […]

In 2020, the wind energy segment in India incurred huge losses owing to the Covid-19 pandemic. Apart from the pandemic, the segment faced issues such as lower energy generation due to slower wind speeds and […]