The world is in the grip of a global energy crisis. The fuel markets have witnessed severe demand and supply shocks owing to the successive waves of the coronavirus pandemic followed by the Russia-Ukraine conflict. The Russia-Uk­ra­ine war, which began in early 2022 and still continues to rage, has fractured deca­des of energy trade relations, with Russ­ian gas supply to many nations being cut off. Thus, entire countries, particularly Eu­ro­pean nations, are now faced with a serious energy shortage and escalating energy bills. Meanwhile, there is turmoil across international oil and gas markets, volatility in currencies, and severe supply disruptions in commodities.

As governments worldwide develop new strategies and introduce policies to deal with this unprecedented crisis, it is being realised with greater clarity that clean energy and lower dependence on fossil fuels are the only way forward. Large-scale dep­loyment of clean energy can help nations ensure their future energy security and protect them from geo­political disruptions in energy suppli­es. Fur­ther, renewable energy, especially so­lar and wind, is cheaper or at par with fossil fuel-based energy ac­ross most economies of the glo­be, making the case stronger for renew­ab­les. In addition, rene­w­able energy is cleaner than fossil fuels and can help countries meet their decarbonisation aims. Ac­cor­­ding to the Inter­national En­ergy Agency (IEA), global renewable energy pro­gress has been encouraging in recent months and annual capacity additions in 2022 are expected to be about 340 GW, a new record.

Some countries already have well-established renewable energy markets and are now expanding their installations and di­ver­sifying into emerging segments such as green hydrogen, offshore wind, solar-wind hybrids and energy storage. Mean­while, some countries are just beginning their re­newable energy journeys and are be­co­ming new attractive hotspots for investors and developers. According to the 60th edition of EY’s Renewable Ener­gy Country Att­ractiveness Index (RECAI) published in November 2022, the top five most attractive countries for renewable en­ergy investments are the US, China, Germany, the UK and France, which are all established re­new­able energy markets with an enabling policy ecosystem and si­ze­able clean energy installations. The re­port also highlights that emerging markets such as Greece, Morocco and Cana­da are slowly becoming favourable investment destinations for clean energy deployments. 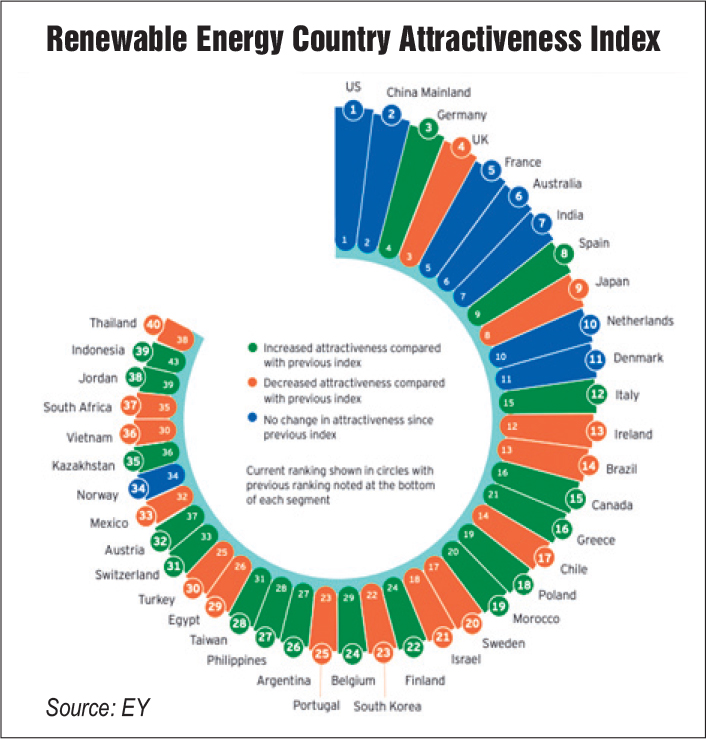 Against this backdrop, this article explo­res the global progress in renewable energy across the solar PV, wind and hydro­power segments, and the future outlook, supported by IEA statistics…

Solar PV is becoming the cheapest sour­ce of new power generation across the world and thus continues to grow by leaps and bounds. Despite pandemic-led res­tri­c­tio­ns, supply chain disruptions and vola­tile com­modity prices, solar PV installations witnessed an increase of 190 GW in 2021. Meanwhile, energy generation fr­om global solar PV deployments increas­ed by a reco­rd margin of 179 TWh in 2021 to exceed 1,000 TWh. This marked a 22 per cent gro­wth in 2021 compared to 2020. Solar PV was the third largest rene­wable energy technology after hydropower and wind, and accounted for 3.6 per cent of global power generation. China continued its dominance in terms of annual solar PV generation growth, followed by the US and the European Union.

In terms of sub segments, utility-scale solar deployments continued to contribute the largest share to new installations in 2021. However, utility-scale projects are becoming challenging to deploy owing to growing land- and grid-related concerns. Mo­re­over, with the inc­reasing policy im­petus on the promotion of distributed solar across resi­den­tial as well as commercial and ind­ustrial installations, the share of utility-scale projects is expected to dec­line in the near future. The corporate power purchase agreement market es­peci­ally is expanding rapidly as consumers opt for solar power over costlier grid power and fossil fuels, which also helps them green their operations.

Wind power installations increased by 113 GW in 2020 and by 830 GW in 2021 compared with just 59 GW in 2019. Thus, a record increase of 273 TWh in wind power generation was witnessed in 2021 owing to the growth in annual installations in the past two years. This increase in generation of 45 per cent over 2020 is the highest among all power sources. Further, de­spite the impressive capacity additions wit­­nessed in the solar PV segment in re­ce­nt years, wind power continues to be the leading non-hydro renewable energy source and was responsible for a generation of 1,870 TWh in 2021.

China, followed by the US and Brazil,  were the leading wind power producing nations in 2021. Meanwhile, low-wind co­n­ditions over a prolonged period hampered wind power generation in the Eu­ropean Union. In terms of technology, more than 90 per cent of the new installations were in the onshore wind space and the offshore wind segment contributed just 7 per cent. This can be attributed ma­inly to the fact that on­shore wind is a mu­ch more mature technology with a presence across the globe. Meanwhile, off­sh­o­re wind is still at early stages of development and is present in only a few countries. However, owing to the po­ssi­bility of much higher wind power ge­ne­ration, offshore wind is poised for massive expansion in the coming years.

Hydropower, the leading renewable energy source, witnessed an energy generation of 4,327 TWh in 2021. Although the ca­pacity additions increased to around 35 GW, generation was slightly less than the previous year. This decrease in en­ergy generation can be attributed to droughts across countries such as Brazil, India, Chi­na, Canada and the US, which have lar­ge hydropower capacities install­ed. Since droughts have continued in 2022, hydropower generation can be expected to be low this year as well. China, as in the case of solar and wind power, was res­ponsible for a large part of the new hydropower capacity constructed in 2021. Large capacity additions can be expected this year as well in China owing to an im­pre­ssive project pipeline.

Although hydropower is a very mature power generation technology, there have been concerns regarding its impact on the environment, especially with regard to the increased risk of floods. Further, poor construction practices in many countries are reported to have disturbed the natural ecological balance of the region and led to the uprooting of the local population. Moreover, severe droughts in many countries, long gestation periods and the capital-intensive nature of these projects have led to questions regarding the efficacy of these projects. Much of the innovation in this space is focused on improving flexibilisation and incorporating digital tools for efficient operations.

Interestingly, it is the infirm renewable po­wer sources – solar and wind – that have led to a renewed interest in the construction of new hydropower facilities. Hydro­po­wer can not only help provide base-load power but also support grid balancing as intermittent renewable energy penetration in the grid continues to increase. Pumped storage projects, especially, are being pl­an­­ned in many nations to serve as large grid-scale storage devices to provide ba­ckup power when required and en­sure the stability of the grid. Although government attention in recent years has be­en fo­cused on increasing solar and wi­nd power dep­loy­ments, hydropower projects need to be promoted owing to their obvious use for grid management. How­ever, adequate ca­re needs to be taken to ensu­re that these hy­­dropower projects are de­ve­loped in a sustainable and environment-friendly manner.

According to the IEA’s latest World Energy Outlook 2022, the current energy crisis exposes the vulnerability and unsustainability of the present energy systems. Fur­ther, the urgent actions and policy directions being taken by governments and corporates are not temporary but have far-reaching impacts. In the report’s “Sta­ted Policies Scenario (STEPS)”, which shows the trajectory in the current policy environment, a 50 per cent rise in annual clean energy investments by 2030 is expected because of new policy measures across leading energy markets.

For instance, annual solar and wind installations are projected to increase massively owing to the US Inflation Reduction Act. Improvements in energy efficiency measu­res and accelerated renewable power de­ployment will significantly reduce the European Union’s demand for fossil fuels. In Asia, meanwhile, China is witnessing rapid expansion of its clean energy capacity because of new targets, and India is progressing towards its target of 500 GW of non-fossil fuel power by 2030. However, adequate attention needs to be paid to technology advancements to secure supply chains and reduce overdependence on any one nation for raw materials as well as finished products. Thus, countries need to develop their own manufacturing capacities, if possible. Further, if essential raw ma­terial reserves are unavailable locally, diver­se trade agreements should be worked on to prevent supply chain disruptions. Going forward, recycling of solar PV modules, wind turbines as well as batteries is going to gain popularity to reclaim essential ma­terials and drive down costs.

Extensive and rapid investments are requir­ed as countries move towards cleaner en­ergy systems to ensure energy security and prevent such future energy crises. Ho­w­ever, investors are quite conscious about long-term investments in the current geo­political climate, especially with regard to fragile supply chains and prolonged ap­proval processes. They are looking for long-term certainty and credibility, with re­ga­rd to not just project returns but also the policy and regulatory climate. Thus, going forward, enabling policies, lack of bureaucratic hurdles, clear and short approval timelines – all easily controlled by governments – will be key to attract clean energy investments.

Key Statistics: Renewable energy potential and installations in the Northeast

India is the world’s fourth largest energy consumer and among the fastest growing large economies. With strong economic growth and electricity demand, the country will need additional sources of energy to fuel its economy, with […]

Solar projects to be installed by Chandigarh Municipal Corporation

The Chandigarh Municipal Corporation (CMC) has announced plans to build four solar power plants on its land. These projects will cost more than Rs 110 million to be developed. The projects are being planned in […]