Green hydrogen is perhaps the most promising market in the energy spa­ce globally at present. Its vast un­ta­pped potential and versatile range of ap­p­li­­cations across transport, power and oth­er industries, as well as rising energy se­curity concerns, are giving this colourless, odourless fuel ample opportunity to grow. India too is a part of this global mo­vement to scale up green hydrogen.

In a short span of time since the announ­cement of a proposed National Hydrogen Mission in the previous Union Budget ad­d­­­ress, green hydrogen has come a long way. Several developments have taken pla­ce in the past one year at the industry and policy levels to promote growth in this space. Both public and private sector fir­ms have announced various projects and collaborations to explore the green hy­drogen potential in various applications. An integrated green ammonia facility has already been commissioned in Rajasthan. Various firms are exploring opportunities in the electrolyser manufacturing and fuel cell space as well.

The government, too, is doing its bit to promote this green alternative fuel. In Febru­ary 2022, the Ministry of Power introduced the first phase of the green hydrogen policy to encourage the industry to foray into this space. The policy has been largely well-received by the industry, which has been ea­gerly waiting for policy support to kickstart their plans. In March this year, Union Mini­s­ter for Road Transport and Highways Nitin Gadkari came to Parlia­ment in a gre­en hydrogen-powered Toyota Mirai car. The move portrayed the minister’s support for green hydrogen and highlighted its potential to become a game-changing fuel, not in the distant future but in the present.

Following the announcement in the Union Budget address in February 2021, the National Hydrogen Mission was formally launched by the prime minister in August 2021. The mission aims to make India a green hydrogen hub and scale up green hydrogen production to 5 million tonnes per annum (mtpa) by 2030.

Six months later, the first phase of the Green Hydrogen Policy was notified on Feb­ruary 17, 2022. The policy has introd­uced several measures to promote the ad­option and production of green hydrogen and green ammonia. Some notable pro­visions of the policy are a waiver of inter-state transmission system charges for a period of 25 years for projects commissioned before June 2025, banking provisions for unconsumed rene­wable power, ease in grant of grid connectivity and open access, and single-portal clearances with time-bound addre­ssal. Furth­er, to promote green hydrogen ex­port, bunkers will be allowed near ports for green ammonia storage, with land facilitation being ensured by port authorities. In addition, discoms and producers of green hydrogen and ammonia will be eligible for renewable purchase obligation (RPO) benefits.

The first phase of the policy will certainly give an impetus to the green hydrogen se­gment and is the first step towards the creation of a well-defined policy framework. However, to create a competitive mar­ket for green hydrogen in India, it is vi­tal that the next phase introduces de­mand-side provisions to facilitate domestic uptake. While the Ministry of New and Renewable Energy has proposed to make it mandatory for industries such as oil refineries and fertilisers to produce or procure green hydrogen as a part of their op­erations, a formal approval is awaited. Ac­cording to the proposed policy intervention, the refinery and fertiliser industries will have to use green hydrogen for meeting 10 per cent and 5 per cent of their requirements with effect from 2023-24, rising to 25 per cent and 20 per cent respectively in five years.

Along with demand-related provisions, self-sufficiency needs to be created in green hydrogen production. Thus, it is im­portant to promote domestic manufacturing of electrolysers through incentivisation and also ensure access to low-cost finan­ce for developing the required supply ch­a­in capabilities. Finally, as all policy interventions have taken place at the central level, they need to be aligned with different state strategies, especially in the case of transmission, open access, RPO, land procurement and demand provisions, in order to ensure sustainable growth of this emerging but highly attractive market.

Green hydrogen is becoming a highly sought-after investment prospect for fir­ms. Various public sector enterprises su­ch as NTPC Limited, Indian Oil Corpo­ra­tion Limited (IOCL), Gas Authority of India Limited (GAIL) and Bharat Petroleum Cor­poration Limited (BPCL), as well as private companies such as ACME, Relian­ce, the Adani Group, Hero Future Ener­gies, and others have either already anno­u­nced projects or indicated their intent to invest in the green hydrogen space. A few tenders have also been launched in the past few months to scale up green hydrogen production. Further, interest has been witnessed in the manufacturing space and many companies have announced pla­ns for electrolyser production.

Oil and gas players: Oil and gas players have been particularly active in the green hydrogen space, as their experience and ready pipeline infrastructure would give them an advantage in hydrogen production, transport and consumption. In April 2022, IOCL, Larsen & Toubro (L&T) and Re­New Power announced the signing of a binding term sheet for the formation of a joint venture company to develop India’s nascent green hydrogen segment. In April 2022, NTPC signed a formal agreement with Gujarat Gas Limited (GGL) for blending green hydrogen in GGL’s piped natural gas at NTPC Kawas. Green hydrogen will be manufactured utilising power generated by NTPC Kawas’ 1 MW floating solar facility.

Prior to this, in November 2021, BPCL announced plans to set up a green hydrogen plant in Madhya Pradesh. It will float a tender for a 20 MW electrolyser to be set up at its refinery in Bina. In the same mo­nth, IOCL invited expressions of interest (EoIs) for setting up green hydrogen generation units at two of its refineries – Ma­thura in Uttar Pradesh and Panipat in Haryana. The plants will have installed capacities of 5,000 tonnes per an­num and 2,000 tonnes per annum respectively and will be set up on a build-own-operate ba­sis. Then, in October 2021, GAIL anno­un­ced its plans to construct a 10 MW green hy­drogen production facility to boost its natural gas operations with carbon-free fuel. It has issued a global tender for the procurement of an electrolyser.

Renewable energy developers: Renew­able energy developers with large wind and solar portfolios are suitably placed to get into the green hydrogen business, as renewable power projects are a key requisite for producing this fuel. Many large developers have announced their intent to enter this attractive market. ACME has al­ready commissioned a single-location integrated solar power to green ammonia facility at Bikaner in Rajasthan. This is a 5 MW project, which can be scaled up to 10 MW. It can generate 4-5 tonnes of green ammonia per day. With the success of this project, ACME, in August 2021, signed an agreement to set up a 3.5 GW green hy­drogen and green ammonia facility in the special economic zone at the Port of Duqm in central Oman. The company sig­n­ed an agreement with Norway-based Scatec ASA to invest in its Oman project in a 50-50 joint venture to design, develop, build and operate this facility. The first phase of the facility is expected to produce 100,000 tonnes of green ammonia annually, which will be expanded to 1.2 mtpa, with about 3.5 GW of electrolyser capacity, which will be powered by a 5.5 GWp solar PV plant.

Other large projects are also under development. For instance, in January 2022, Hero Future Energies announced a strategic collaboration to develop and build 1,000 MW of green hydrogen production facilities in India, the UK and Europe. Oh­mium will be responsible for the facilities’ design, construction, operations and ma­in­tenance. Hero Future Energies will be the build-operate-own partner and will ge­nerate green energy to power the manufacturing facilities and assume overall as­s­et ownership. In August 2021, JSW Fu­ture Energy Limited, a wholly owned subsidiary of JSW Energy Limited, entered into a framework agreement with Austra­lia’s Fortescue Future Industries to collaborate on assessing the potential of green hydrogen and its utilisation in green steel making, hydrogen mobility, green ammonia and other mutually agreed industrial applications in India.

Another large energy player, NTPC Li­mited has been making significant efforts to scale up green hydrogen production. In Dec­em­ber 2021, the company awarded the “Sta­ndalone fuel-cell-based microgrid with hy­drogen production using electrolyser” project at NTPC Simhadri, Andhra Pra­desh, to California-based Bloom Energy. Hydrogen will be produced using an advanced 240 kW solid oxide electrolyser that will be powered by a nearby flo­ating solar installation. The hydrogen generated during daylight hours will be held at high pressure and po­wered by a 50 kW solid oxide fuel cell. From 5 p.m. to 7 a.m., the system will run on its own. NTPC de­ve­loped this project co­n­figuration in-house.

Electrolyser manufacturers: For India to become a green hydrogen hub, it is important for the country to be self-reliant in terms of supply chains. A re­duction in electrolyser costs will also help reduce the ov­er­all cost of producing gr­een hydrogen and thereby improve its uptake. Many do­mestic companies have tied up with established foreign companies to set up electrolyser manufacturing units in India. In Feb­ruary 2022, the Adani Group and Ballard Power Systems joined hands to assess a combined investment in hydrogen fuel cell production in India. In January 2022, L&T signed an MoU with Hydro­genPro AS, a company based in Norway, for a JV to manufacture gigawatt-scale al­ka­line water electrolysers based on Hy­drogenPro technology for the Indian market and other select regions. Further, in December 2021, BPCL partnered with the Bhabha Atomic Research Centre to scale up alkaline electrolyser tech­nology for the generation of green hy­drogen. In the same month, the Green­ko Group signed an ag­reement with John Cockerill, a Belgian ma­nu­facturer of alkaline electrolysers, to jointly undertake market initiatives for green hydrogen electrolysers in India. Greenko also plans to build gr­een ammonia export facilities in India th­at can produce up to 1 mtpa by 2025, re­q­uiring roughly 2 GW of electrolyser capacity.

Industry major Reliance Industries too is planning to build four gigafactories in Gujarat, including an electrolyser factory and a unit for fuel cell production. It will also generate 400,000 tonnes of hydrogen through the use of about 3 GW of solar energy at its proposed electrolyser gigafactory.

India has a target to produce 5 mtpa of green hydrogen by 2030. According to analysis carried out by Renewable Watch Research, the required electrolyser capa­city is expected to be 30 GW and the re­quired renewable power capacity is ex­pected to be 60 GW. To achieve these targets, complementary policy incentives will be needed to bring down the cost of lar­ge-scale green hydrogen and bridge the gap between fossil fuel-based hydrogen and green hydrogen. Further, uptake will have to be supported by finance from lea­ding lenders and investors.

While these developments are encouraging, a lot still needs to be done to promote large-scale uptake of green hydrogen in India. The positive factor is that countries across the world are at a similar level of development, giving India am­ple opportunity to emerge as a leader in this space. 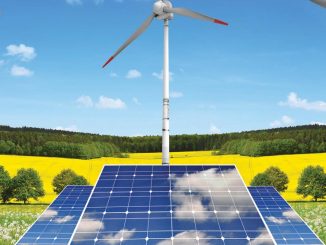 December 25, 2018
The government’s continued focus on solar and wind capacity addition has led to a remarkable increase in the share of renewables in the country’s ...
More