It has been well established that along with solar modules, efficient supporting equipment is an important factor in the construction of solar projects. The inverter is one of the key components of any solar system. It is a device designed to convert direct current (DC) from solar panels into alternating current (AC) frequency that can be fed into the grid. The technology is integral to any solar project as it acts as a bridge between the solar panels and the grind. Thus, the solar inverter industry has grown proportionately with the growth of installed capacity and is only expected to grow further, as India is making rapid strides towards reaching its solar target of 100 GW by 2022. For large-scale solar projects, central inverters have been widely adopted by solar developers and, in recent years, string inverters have been making inroads in the Indian market.

As solar projects are built to last for 25 years, it is equally critical that their inverters are of desirable quality. Solar inverters are made up of components that are sensitive to high temperatures and run the risk of overheating. In the presence of moisture, the device is also prone to short-circuiting. Further, the inverter must be capable of restarting on its own, in case of grid failures. Since large amounts of variable solar energy enter the grid, inverter systems must ensure a minimum loss of power. This is where the role of testing and certification of these devices comes in.

Testing and certification of solar inverters

To streamline the quality of solar inverters, they must be tested for safety, efficiency, environmental standards and grid-interconnection. In a notification released in September 2017, the Ministry of New and Renewable Energy (MNRE) issued guidelines mandating the registration of solar inverters with the Bureau of Indian Standards (BIS). Although the policy was intended at improving the solar infrastructure, it had initially caused several ambiguities for manufacturers. The biggest issue has been the lack of testing facilities, the Central Power Research Institute being the only government-authorised test facility at that time. It has been reported that the facility was not adhering to the notification strictly nor was it equipped to test a wide range of inverters. Another issue raised has been regarding the high cost of testing, ranging from Rs 3 million to Rs 4 million, with some manufacturers claiming that they cannot remain profitable with the introduction of these changes.

In an attempt to address the confusion among manufacturers, which resulted in multiple delays in implementation, the MNRE introduced certain revisions to its 2017 notification. In August 2019, the ministry released details on the testing sequence to be followed, based on the categorisation of types of inverters. In April 2020, the MNRE released the draft guidelines for technical specifications for solar inverters. The notification specified additional tests that were to be conducted by manufacturers, which include protection against abnormal voltage and frequency and response to utility recovery. Further, the standards specified requirements for the interconnection of PV systems and inverters to the utility distribution system. 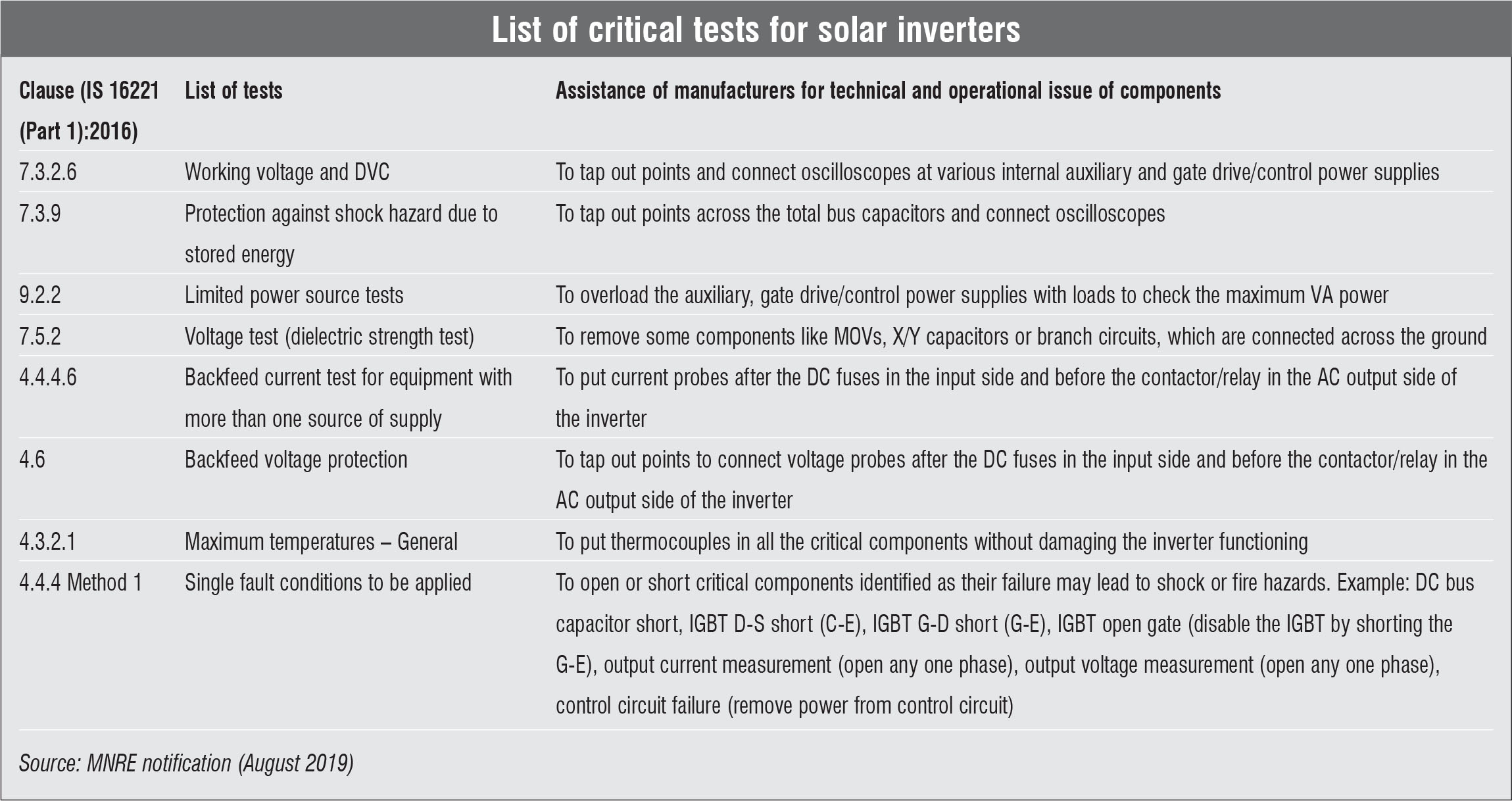 Since 2017, the implementation of testing and certification has been subject to numerous delays due to ambiguities and lack of testing infrastructure. However, the MNRE has taken steps to combat this with revisions on the testing procedures. For manufacturers, the deadline for obtaining self-certification from the BIS was finally set for December 31, 2020. Efforts have also been made to improve the testing infrastructure in the country, with solar PV testing facilities being expanded to test inverters as well.

In July 2020, a safety science company, UL, received recognition from the BIS to carry out tests on solar inverters in India. The company’s facility in Bengaluru, Karnataka, has been expanded to provide help with solar inverter manufacturers to comply with the standards that have been mandated by MNRE. The facility is capable of testing inverters with capacities of up to 50 kW. In February 2020, TUV Rheinland expanded its Bengaluru solar module testing facility to carry out testing of solar inverters with a rated capacity of up to 100 kW.

Subsequent to the MNRE’s clarification to address the confusion among developers and its streamlining of the testing procedures to include aspects of grid connectivity and PV modules, the situation has improved. No further extension in deadlines has been announced as yet for BIS self-certification and testing facilities have slowly started emerging. A few companies, such as China-based Ginglong Solis, have announced BIS certification for all their solar inverters. Despite these improvements, there have been no efforts to address the issue of the high costs of testing, which may have had a bigger impact on companies, become of the Covid-19 pandemic.

As the country’s solar capacity is set to expand at a fast pace, there is increased emphasis on the quality and performance efficiency of the supporting infrastructure, in which inverters play a crucial role. As developers adopt new and more efficient solar inverters, the revision and timely implementation of testing procedures are crucial to catalyse sustainable and reliable installations of solar power projects in the country.

The country’s total installed solar photovoltaic (PV) capacity reached 20 GW in 2017, of which about 9.6 GW was added during the year. Meanwhile, solar power generation increased from 11.6 billion units (BUs) in 2016 […]

Operations and maintenance (O&M) activities play a key role in ensuring the long-term sustainability and growth of wind power projects. According to the Global Wind Energy Council (GWEC), after-sales and services have emerged as a […]