The rapidly growing solar market calls for a fast evolving solar inverter market. Inverters are an integral part of power generation through solar. The function of a solar inverter is to convert the direct current produced by solar panels into alternating current. This alternating current is the more commonly used form of electricity that is used in transmission as well as for powering appliances. Inverters also play a key role in monitoring the performance of the entire solar plant and provide diagnostic data required to identify and fix any technical glitches. The type of inverter used in a solar installation varies depending on the intended use, grid availability, power cut and load calculation. The market for solar inverters has been growing. The key trends in the solar inverter market are the rising popularity of string inverters, continuing dominance of Chinese products, increasing inverter sizes, and the development of new and improved technologies.

As per a report by Wood Mackenzie, the global solar inverter market grew by 18 per cent during 2019. During the year, global inverter shipments hit a record high, falling just short of 130 GW. In 2019, the market share of central and string inverters stood at about 36 per cent and 61 per cent respectively, leaving less than 2 per cent to microinverters. In terms of application, string inverters are used in residential and medium-size commercial solar installations, while central inverters are primarily deployed for large commercial and utility-scale projects. String inverters are directly connected to the grid and mostly do not come with the facility of battery backup. These are the most commonly used solar inverters, for both business and household purposes. Meanwhile, central inverters are highly efficient while being compatible with distinct features of the grid such as fluctuation management and balancing. These solar inverters are usually large and are available with a capacity of 400 kW and beyond.

Even though the microinverter segment forms a small segment of the global market, it was valued at $1,166.24 million in 2019 and is projected to grow at a double-digit compound annual growth rate (CAGR) of 24.32 per cent to reach $2,934.86 million by 2025. Based on the type of solar microinverter, the market can be categorised into single phase and three phase. The single-phase segment ruled the market during 2019 with a share of 79.87 per cent and is expected to continue to dominate in the coming years since it has a compact size that is well suited for residential and commercial applications.

In terms of global market leaders, the Chinese firm Huawei led the inverter market, followed by another Chinese manufacturer, Sungrow. German company SMA held the third position, while Spanish company Power Electronics was at number four. After acquiring the Swiss company ABB, the Italian inverter maker Fimer climbed to the fifth position. The five largest inverter manufacturers constituted a market share of about 56 per cent, while the top 10 accounted for nearly 76 per cent of the market.

The US solar market has been dominated by the utility-scale sector, which accounted for the bulk of the growth. However, the residential space has witnessed massive scale-up in installations. Meanwhile, non-residential installations have declined due to policy issues in certain regions. There was a frenzy to secure solar equipment in the US during 2019 to capitalise on the 30 per cent federal investment tax credit, which was set to reduce to 26 per cent from 2020 onwards.

In order to qualify for investment tax credit, many US developers decided to safe-harbour solar inverters, though at a lower rate. During 2019, 25-30 per cent of the US PV inverters shipped were purchased for safe-harbouring purposes. The decision to safe-harbour inverters made sense to developers since improvements in inverter technology are considerably slower paced than developments in module technology. Further, inverters make up a relatively small part of the total cost, so a decline in inverter prices will be less significant on a dollar-per-watt basis compared to module technology. North America has been dominating the microinverter market on account of a high number of installations in the region.

Europe was an early mover in the renewable energy space. Since the solar market in Europe picked up in the late 2000s, inverters installed at that time are now starting to reach the end of their life. Thus, there will be a significant demand for their replacement. In the coming years, Germany, Spain and Italy are expected to invest in Europe’s replacement market, which will need supply of a new generation of inverters to thrive.

A notable acquisition in the European market was the takeover of ABB’s inverter line by the Italian firm Fimer. In recent years, a healthy expansion of solar markets has been made possible by suppliers such as SMA, which has maintained its popularity in Germany and across Europe. Further, the Spanish company Power Electronics has maintained its lead in the home market while increasing its utility-scale shipments to the US. 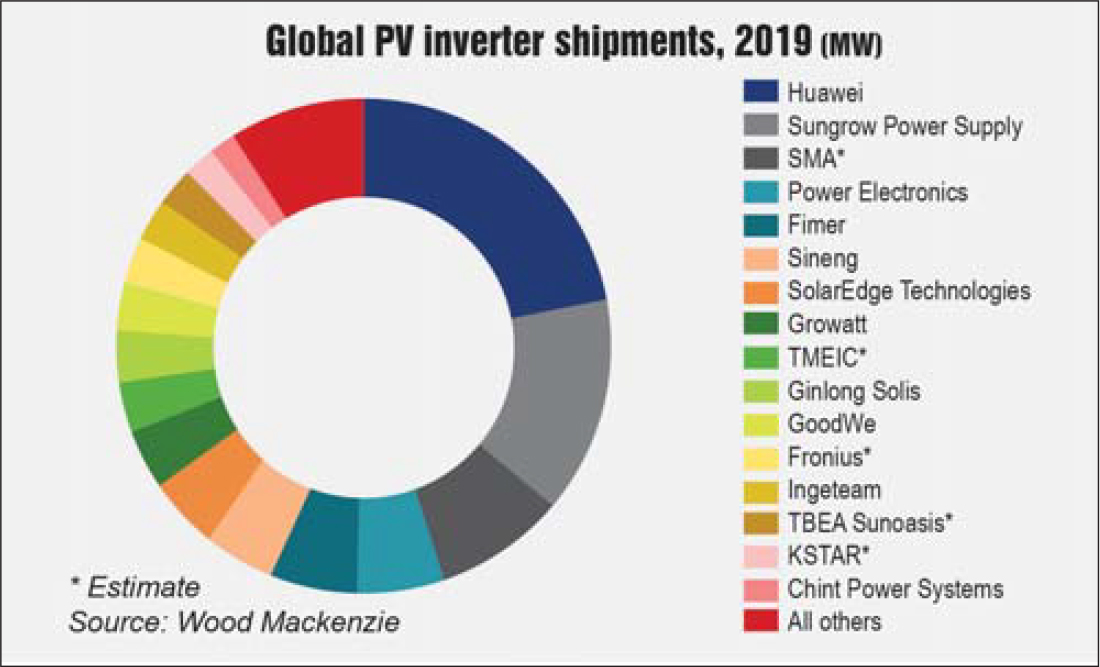 China led the solar PV installed capacity addition during 2019, with 30.1 GW, although this was a 32 per cent decline compared to the installations during 2018. Further, solar inverter demand decreased for the second year in a row in China during 2019 due to declining installations. Even though Chinese suppliers witnessed a decline in domestic demand, they increased their international market share by 7 per cent to reach 38 per cent during 2019.

Since Chinese inverter companies are typically more price competitive than their European counterparts, their growing global presence has, in turn, increased price pressure. As a result, the market has seen a notable degree of consolidation. Inverter companies continue to make significant investments and update their products to meet local grid and technical requirements, and set up local sales and service offices in various regions across the world. Some Chinese suppliers such as Ginlong and Sineng have also turned to investors by issuing shares in their initial public offerings.

The Indian solar market has become highly competitive with a series of tenders and reverse auctions being conducted at regular intervals and all this is resulting in a robust solar project pipeline. The country’s power grid is characterised by rapid fluctuations in voltage and frequency, and high levels of harmonic content. This translates into a weak grid connection and low power quality. In this scenario, string inverters are a good option to support the grid.

Considering the target of 100 GW solar power installed capacity by 2022, the market for solar inverters is expected to improve further. Within the inverter market, technology trends point towards growth in the share of string inverters for utility-scale as well as rooftop solar power projects. The new hybrid inverter technology may have a long way to go before becoming mainstream, especially since its present design allows application only for smaller capacities. 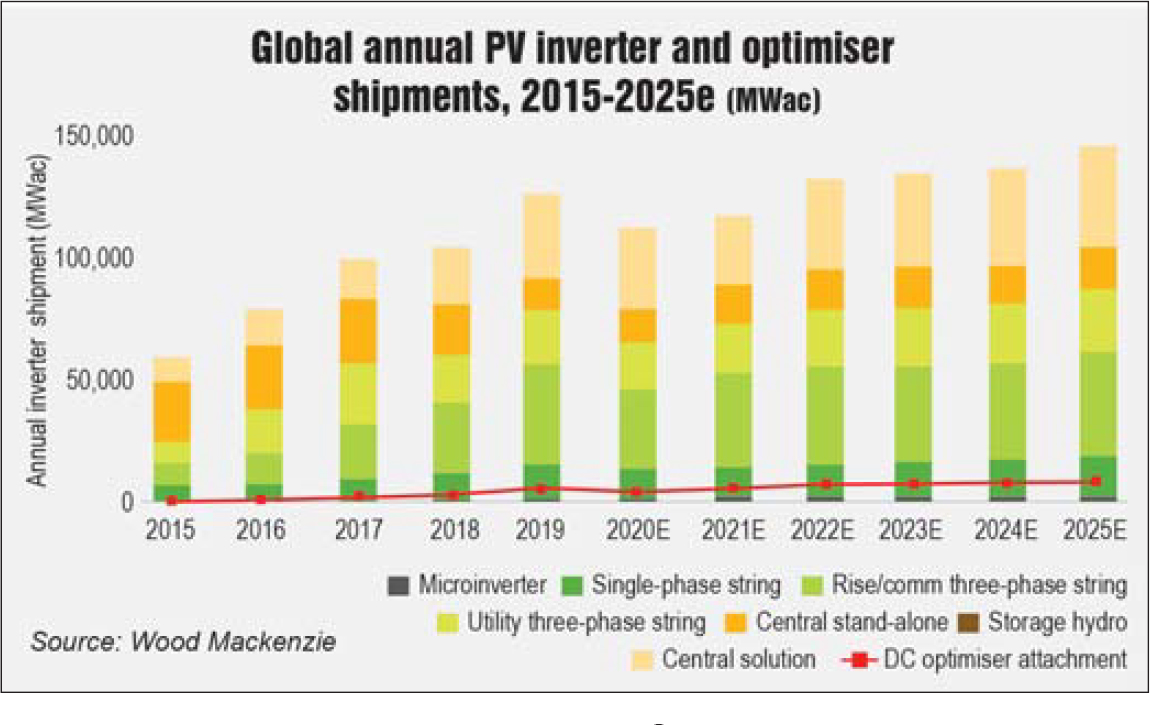 Despite the adverse impact of the Covid-19 pandemic, the overall sentiment in the inverter market is positive. As solar power installations continue to grow globally, and systems eventually age and need replacement, the demand for inverters will increase. The inverter industry shows an overall upward trend, which is expected to continue for the next five years. As per Industry Research, the global market for solar inverters is expected to grow at a CAGR of roughly 0.3 per cent over the next five years. It will reach  $6,310 million in 2024, from $6,200 million in 2019.

With greater emphasis on digitalisation and customer needs, inverter manufacturers need to come up with new and innovative options. One of the emerging technologies to are smart inverters. These devices  offer advanced capabilities such as voltage and frequency sensors. Smart inverters are able to detect grid abnormalities and send feedback to utility operators. Further, manufacturers are turning to new materials and software that can help them take the next leap in technology. To this end, suppliers are carefully monitoring silicon carbide prices, which hold the potential for inverter designers to build even more efficient and power-dense solar inverters.

Critical Components: Opportunities, demand drivers and challenges in the drives and motors market

India is gearing up to achieve the 60 GW of wind energy target by 2022. To this end, market forces are realigning constantly to arrive at the best possible permutation of low capital costs and […]

To facilitate grid stabilisation and promote the uptake of electric vehicles (EVs), energy storage is key. In the renewable energy sector, storage addre­sses the intermittency issue as­sociated with solar and wind power, and ensures a […]