The US offshore wind industry is witnessing large-scale deployment. As of end 2019, the US had a total of 30 MW of grid-connected offshore wind capacity. The north-eastern states have been driving strong demand for offshore wind energy and have together set huge offshore wind procurement targets. However, it is imperative to effectively connect offshore wind energy to the grid to reap clean energy benefits, as planned by various states in the US.

Political push and regulatory initiatives to achieve clean energy goals have so far been the major market drivers for the offshore wind industry in the US, which has a target of achieving 22 GW of offshore wind generation by 2030 and 86 GW by 2050. However, the massive infrastructure buildout over a relatively short period of time has posed unique challenges for the country. For states to achieve their respective clean energy targets, the ability of offshore wind energy projects to connect to the grid in a predictable, timely and cost-effective manner is important. Therefore, transmission solutions that facilitate a strong, reliable grid, supporting offshore wind energy, need to be explored in order to satisfy the country’s increasing power demand.

Keeping this in view, the Federal Energy Regulatory Commission (FERC) recently convened a technical conference to determine whether and how the existing interconnection and merchant transmission facility frameworks in the jurisdiction of regional transmission operators and independent system operators (RTOs/ ISOs) can accommodate anticipated growth in offshore wind generation in a cost-effective manner. Below are the key takeaways from the conference.

In order to meet its long-term renewable energy targets and to decarbonise the economy, various states in the US have been eyeing offshore wind and engaging in procurement on a large scale. North-eastern states that have made offshore wind procurements include Maine, Massachusetts, Rhode Island, Connecticut, New York, New Jersey, Maryland and Virginia, with a total of 6,460 MW contracted capacity and a goal of 28,530 MW by 2035.

Massachusetts has so far procured about 1,600 MW of offshore wind and plans to procure an additional 1,600 MW in the next two years. Post the first wave of procurement, the state would need 700-800 MW annually between 2030 and 2050 to meet its goal of net-zero-carbon emissions by 2050. Additionally, New York, New Jersey and Virginia are in the process of procuring another 7,540 MW cumulatively. In July 2020, the Governor of New York State announced the largest combined clean energy solicitations ever to be issued in the US, seeking up to 4,000 MW of renewables – including New York’s second offshore wind solicitation, which seeks up to 2,500 MW of projects, the largest in the country’s history. Another key driver of offshore wind in the US is the requirement for electrification of transportation and heating systems, which, in turn, is anticipated to contribute to load growth in the country. This necessitates a well-defined transmission planning process. The scale at which offshore wind is being generated and procured calls for a reliable plan to ensure that offshore and onshore systems work in tandem to support clean energy goals. 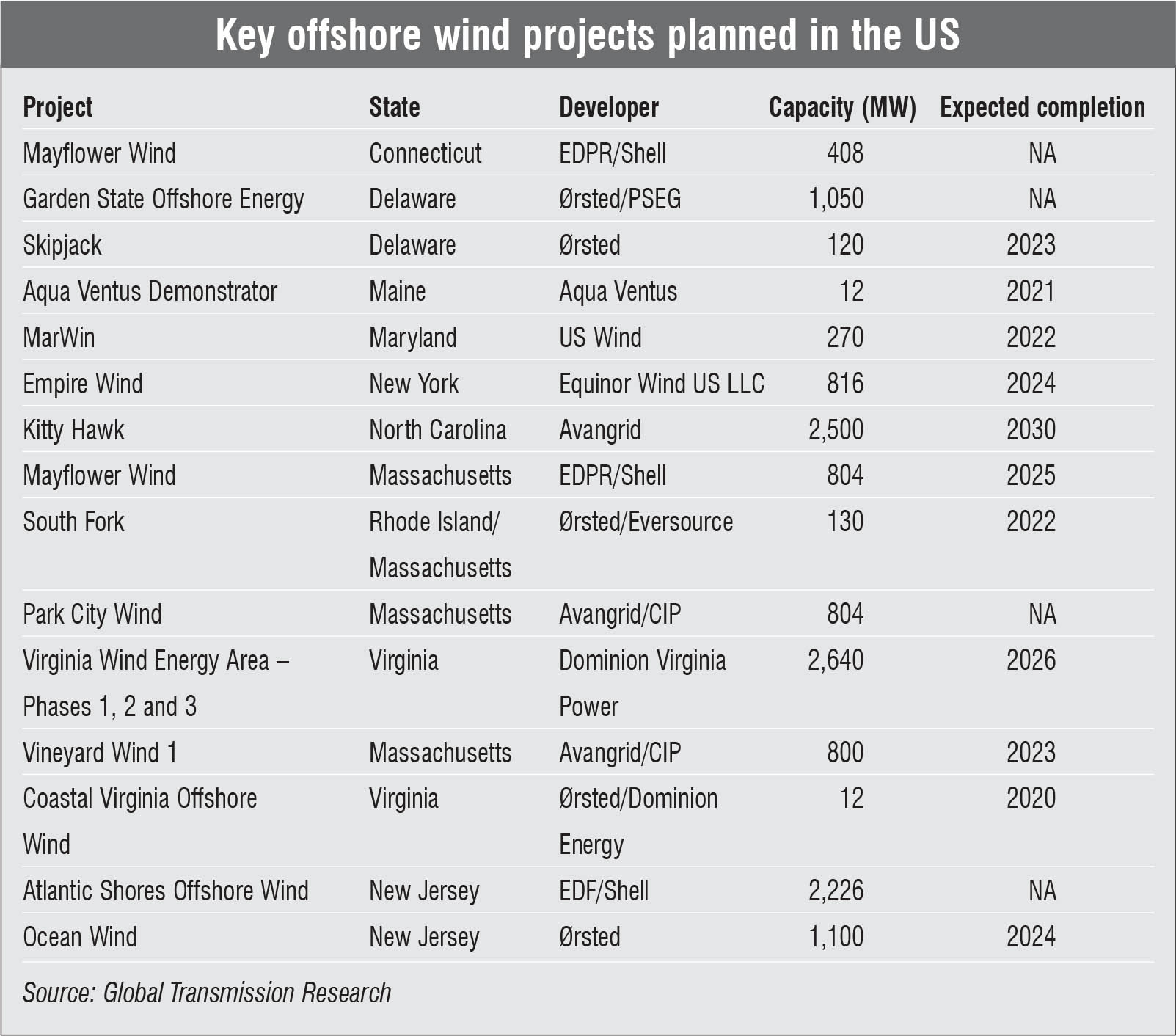 Unsystematic approach: The present system governing offshore wind transmission projects focuses on developing generation facilities first and then taking the associated transmission facilities into consideration. Various states are accepting proposals from developers that bundle generation and transmission together, creating a patchwork of proposals for delivering wind-generated power from offshore assets to a limited number of onshore interconnections. However, it is being realised that such an unplanned approach cannot continue.

There have been discussions in the past stressing on the fact that the country cannot afford to develop its offshore wind technology in an unsystematic manner, relying on partial measures being taken over a period of time. It is becoming clear that the existing principles may not be valid any more as the changes required in transmission planning associated with offshore wind seem to be blurring the line between reliability needs vs economic needs (such as congestion relief and public policy needs). Moreover, it has been highlighted that focusing on one project at a time would not ensure the development of large-scale transmission infrastructure required across the country to integrate offshore wind.

Lack of coordinated transmission policy: As the East Coast braces for up to 30 GW of offshore wind development by 2035, there has been limited coordination between the federal government, states and grid operators on the offshore wind transmission issue. The lack of a coordinated transmission policy is seen as an existential constraint affecting the ability of the US offshore wind industry in realising its full potential. A white paper released on October 26, 2020 by the Business Network for Offshore Wind, a non-profit organisation for the promotion of offshore wind, recommended that policymakers, regulators and grid operators engage in long-term, interregional planning that quantifies all benefits and public policies set out by states.

It is feared that the FERC’s Order 1000 might not be working for interregional transmission projects; this might hold true for offshore wind projects as well. The order was meant to promote greater regional transmission development and competition, remove barriers to the development of transmission, promote cost-effective planning and fair allocation of costs for new facilities, and foster competition between the existing transmission owners and non-incumbent developers. Thus, the interregional aspects of the order might need re-examination.

Unprepared onshore grid: The onshore grid needs to be upgraded to integrate large-scale offshore wind energy in the power system. It has become imperative to develop a framework regarding who should plan, develop and build the offshore part of transmission and more importantly, who should plan and engage in the onshore transmission upgrades necessary to integrate offshore wind. For instance, about 14,000 MW of offshore wind has been committed in the Pennsylvania, Jersey, Maryland (PJM) power pool. Meanwhile, a cumulative capacity of 15,000 MW has been committed in New York and New England and this will be contracted and developed in the next 10-15 years. For accommodating such large-scale offshore wind capacity, northern states require about $10 billion for onshore transmission upgrade, as estimated by the Brattle Group, an economic consulting firm in the US. Studies have found that it is not cost effective to upgrade one onshore grid interconnection at a time. 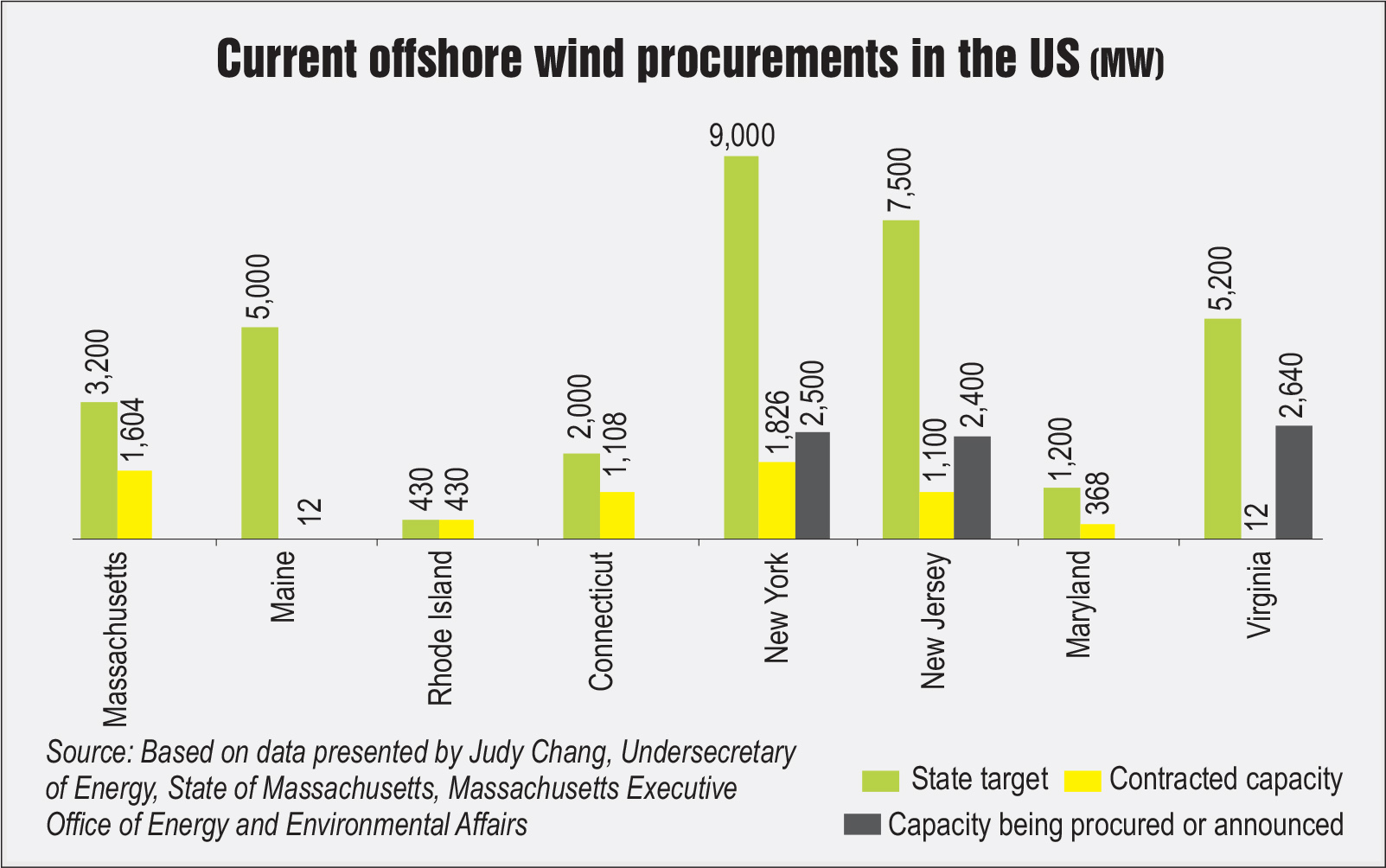 Well-defined regional framework: The development of a well-defined regional framework for offshore wind integration is pivotal as it would give certainty to developers and suppliers, as well as help in identifying the manufacturing needs and moving the supply chain forward for timely delivery of transmission projects. Hence, it is crucial to identify how much transmission capacity has been planned for the next 10-15 years in a region/state in the US.

Hybrid merchant model: It was pointed out that the existing merchant transmission model is not well suited for offshore wind as developers face difficulties in raising financing. Other challenges also exist with respect to the merchant model – for instance, a radial merchant line extending the PJM grid without connecting to another RTO or an identified generation project is not eligible to receive interconnection rights under PJM’s tariff. It was concluded that the current merchant transmission model does not work, and instead, a “hybrid merchant” investment model that would include merchant features such as absorbing cost overruns and building facilities on a fixed-fee basis should be considered.

Technological enhancement: Technical innovation has been recognised as key to the development of future offshore wind in the US. However, along with technical innovation, the industry requires flexibility in its approach to integrate offshore wind at the regional level, with varying targets and plans of different RTOs/ISOs. Since the generation interconnection process has not proved to be very efficient in bringing offshore wind energy onshore, an alternative solution called “multi-generator collector lines with high voltage direct current (HVDC) technology” could be looked at.

It was proposed that a planned mesh network (PMN) should be adopted as it would be more beneficial than the existing radial generator lead line model. The PMN would be an HVDC backbone network that would gather power from multiple wind projects. A few panellists also urged the FERC to declare PMN as the preferred offshore transmission infrastructure.

A well-defined regional framework ensuring flexibility in regional planning is also needed. If not for thorough transmission planning, offshore wind would remain stranded offshore forever, with no means of getting onshore. 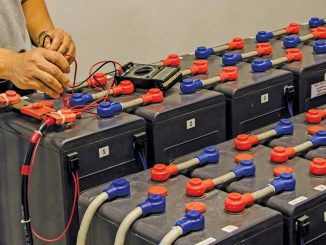 September 2018
In September 2016, several wind farms in South Australia blacked out owing to a fault in the transmission system, resulting in a continent-wide power ...
More