The state of New Jersey, located in the heart of the US East Coast wind belt, has set itself on the path of clean energy and is developing offshore wind energy to address the issue of climate change. It plans to install enough offshore wind turbines to power over 3.2 million homes and meet 50 per cent of its electricity needs by 2035. In November 2019, Governor Phil Murphy signed Executive Order No. 92, while announcing the state’s offshore wind capacity target of 3,500 MW by 2030 and 7,500 MW by 2035 to help meet its goals of 50 per cent renewable energy by 2030 and 100 per cent carbon neutrality by 2050. The state has developed a roadmap for achieving 7,500 MW of offshore wind capacity in the next 15 years. Its draft Offshore Wind Strategic Plan (OWSP), released in early July 2020, focuses on various priority action points that the state intends to follow to build a robust offshore wind industry while protecting its natural and environmental resources, as well as commercial and recreational fishing. In addition to this, the New Jersey Board of Public Utilities (NJBPU), on July 22, 2020, issued a draft Solicitation Guidance document for its second offshore wind solicitation. The document includes information on the timeline and mechanisms of the second solicitation, the application requirements, and the criteria for evaluating applications.

Recently, the US East Coast, which is one of the most promising regions for harnessing offshore wind, witnessed a range of activities in the sector. The East Coast offshore wind industry grew from 30 MW of installed offshore wind capacity in 2018 to a pipeline of over 35 GW to be realised by 2035. Several factors such as individual state offshore wind initiatives, together with federal government action to designate East Coast areas for offshore wind generation, have shaped a bright future for the industry. In addition to New Jersey’s commitment to 7,500 MW by 2035, the nearby states of Maryland and New York have committed 1,200 MW and 9,000 MW of offshore wind energy, accounting for approximately 50 per cent of the East Coast market.

The federal government, led by the Bureau of Ocean Energy Management (BOEM), is tasked with identifying, leasing and reviewing offshore wind areas and projects located between 3 and 200 nautical miles from the US coast. The BOEM identifies wind energy areas (WEAs) in federal waters that are most suited for offshore wind development. Post the designation of the WEAs, the BOEM conducts further reviews and identifies smaller sections within the WEAs as lease areas to be developed as offshore wind farms. These lease areas are auctioned by the bureau to offshore wind developers who bid for the opportunity to plan, construct and operate offshore wind projects. States and other stakeholders work with developers and federal agencies to plan and approve the development of specific wind farms. There are currently 17 BOEM-designated offshore wind lease areas along the East Coast, six of which are located off the coast of New Jersey. In addition to these, the bureau is currently evaluating several WEAs as potential offshore wind lease areas along the East Coast.

States play a crucial role in the offshore wind project review process. The New Jersey Department of Environmental Protection (NJDEP) is the lead agency for the state’s approval process and has regulatory oversight over offshore wind energy transmission cables and infrastructure built in a state’s territorial waters as well as onshore activities. The NJDEP is designated as a cooperating agency for the federal environmental review process and can make recommendations to minimise and mitigate potential natural resource impacts. New Jersey, along with other states, solicits the purchase of offshore wind energy in the form of electricity generated by a proposed project over a specified time frame. The NJBPU is tasked with soliciting bids for offshore wind generation projects, evaluating the received proposals, and awarding subsidies (offshore wind renewable energy certificates [ORECs]) to winning bidders.

Onshore substation upgrades and connections are overseen by the network operator, which, in New Jersey, is PJM Interconnection LLC (PJM). Wind developers are required to coordinate onshore landing of export cables with PJM, landowners, and the local and state governments. PJM acts as an independent party under the regulation of the Federal Energy Regulatory Commission and operates one of the world’s largest competitive wholesale electricity markets, which provides power to over 65 million people. 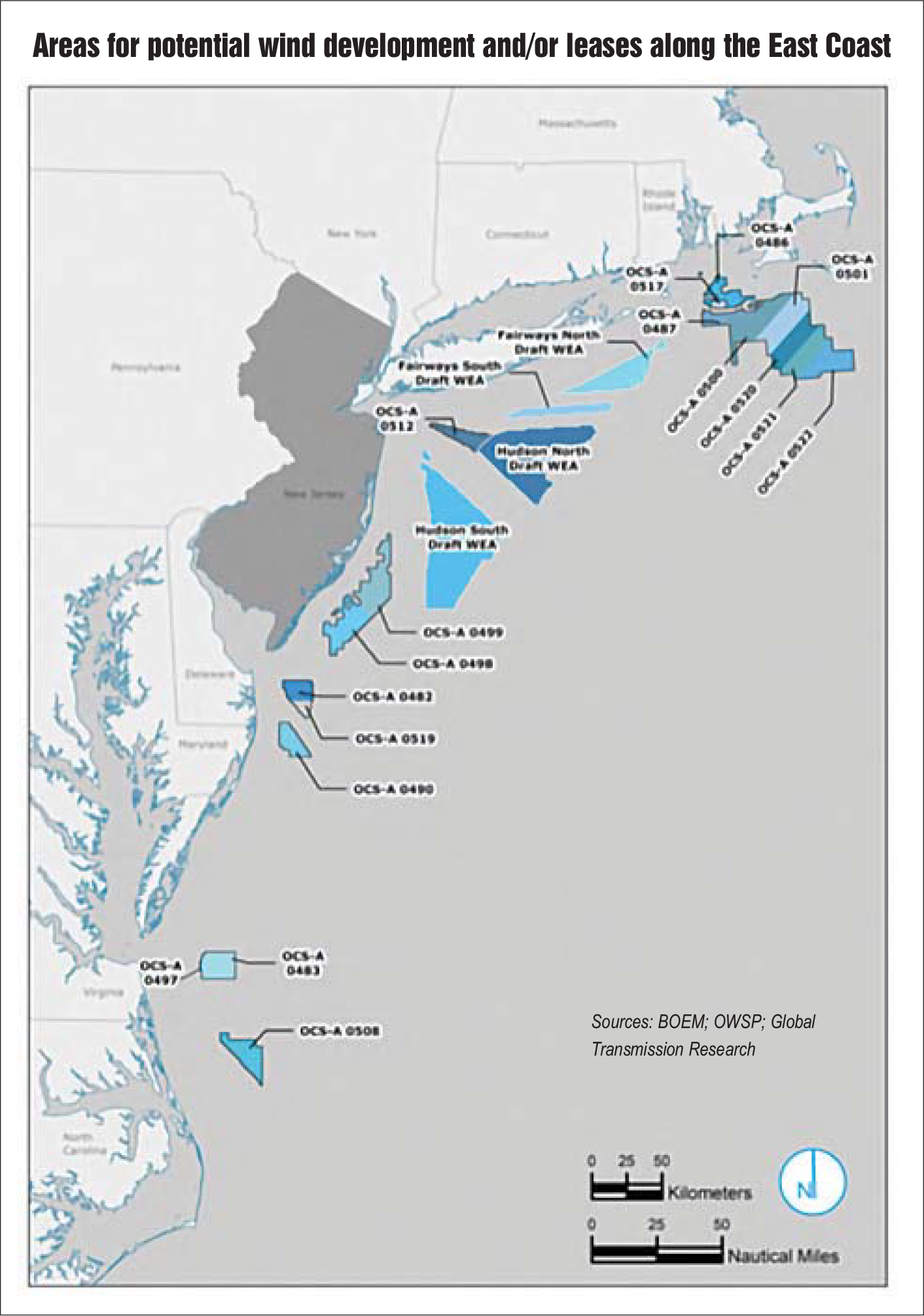 New Jersey has established itself as a leader in offshore wind development by enacting the Offshore Wind Economic Development Act (OWEDA) in August 2010. The Act advised the Board of Public Utilities (BPU) to establish a programme for ORECs in order to incentivise the development of offshore wind facilities.

In January 2018, New Jersey’s governor signed Executive Order No. 8, which directed the NJBPU to fully implement OWEDA and work towards achieving the goal of 3,500 MW of offshore wind by 2030. In response, in September 2018, the NJBPU issued a solicitation for the first 1,100 MW of offshore wind capacity – the largest single solicitation issued by any state at that time. Following this, in June 2019, the board selected Denmark-based Ørsted for its 1,100 MW offshore wind solicitation. The project is currently under way and is expected to be operational by 2024. Later, in November 2019, the governor signed Executive Order No. 92, which increased the state’s offshore wind energy generation goal to 7,500 MW by 2035.

In July 2020, the NJBPU issued a draft guidance document for its second offshore wind solicitation. The document outlines the solicitation seeking to secure ORECs targeting 1,200 MW to 2,400 MW of qualified offshore wind project(s) or qualified projects. The latter are wind turbine generation facilities located in the Atlantic Ocean in designated BOEM lease areas and connected to the transmission system in New Jersey, including the associated transmission-related interconnection facilities and equipment, which have been approved by the BPU.

Developers need to submit an application in response to the solicitation for the project they wish to be qualified for in the bidding process. As per the guidance document, an applicant may submit multiple projects in an application, with specific information about the configuration of each wind turbine regarding power generation capacity and associated design elements.

The current timeline in the draft document anticipates the NJBPU would consider the second solicitation at a board meeting in September 2020. The deadline for submitting applications is December 2020. The results of the solicitation are expected to be issued in June 2021. The NJBPU reserves the right to select less than 1,200 MW or more than 2,400 MW, if circumstances warrant.

As the first 1,100 MW offshore wind project is under way, New Jersey is formulating immediate and future steps to promote this nascent industry. The draft OWSP focuses on several priority action points that the state intends to pursue in trying to build a robust offshore wind industry while protecting its natural and environmental resources; maintaining viable commercial and recreational fishing; building a supply chain and training of workforce; identifying ports and potential ports to serve the sector; and tackling transmission infrastructure to bring power from offshore wind farms to homes and businesses.

The OWSP incorporates scientific studies and data, state agency input, industry expertise and stakeholder input to help meet New Jersey’s offshore wind goals. Furthermore, the draft mentions that two ports – the New Jersey Wind Port in Salem county adjacent to the nuclear units there, and Paulsboro – will play an important role in the early development of offshore wind power. These are labelled critical in the rollout of the state’s first offshore wind farm of 1,100 MW to be implemented by Ørsted and likely to be finished by 2024.

New Jersey is working actively to grow its offshore wind industry. The state’s recent initiatives indicate the administration’s commitment to achieving 7,500 MW of offshore wind energy by 2035 and carbon neutrality by 2050. Net, net, offshore wind development in the state will need to continue over the various phases of its plan through 2035 and beyond so as to determine the future course of offshore wind transmission in New Jersey as well as in the US.