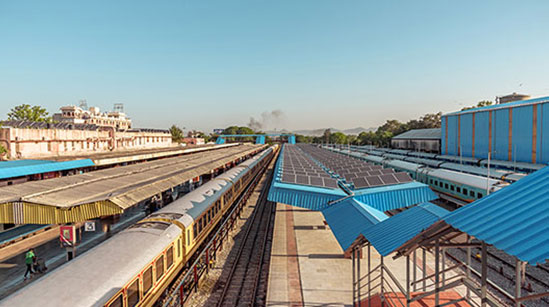 The Southern Railways plans to develop a cumulative of 107 MW of solar capacity on unused railway land. While 67 MW are to be set up on vacant land, 40 MW will be set up alongside tracks. For these projects, Southern Railways has identified vacant land of 300 acres as well as 160 acres of land along the tracks to develop solar projects. Further, it also proposes to provide rooftop solar plants of 2.69 MWp at Perambur and Golden Rock workshops. A tender has been issued for the 67MW project by the Railway Energy Management Corporation Limited (REMCL) while a second tender for the on-track developments is expected to be released in the near future. The proposed project would significantly add on to the existing solar capacity of 4.74MWinstalled by the Southern Railways so far.

Renewable energy presents an opportunity for Indian railways to save on electricity payments. Renewable energy projects attributed to savings of Rs 166 million for the Southern Railways during the year 2019-20. Similarly, The Western Railway (WR) has claimed that it has saved Rs 30 million in power payments by using solar power at 75 of its stations. These rooftop solar plants have a power generation capacity of nearly 8.67 MW. Among the zonal railways, the Eastern Central Railways is also planning to set up projects on vacant land.