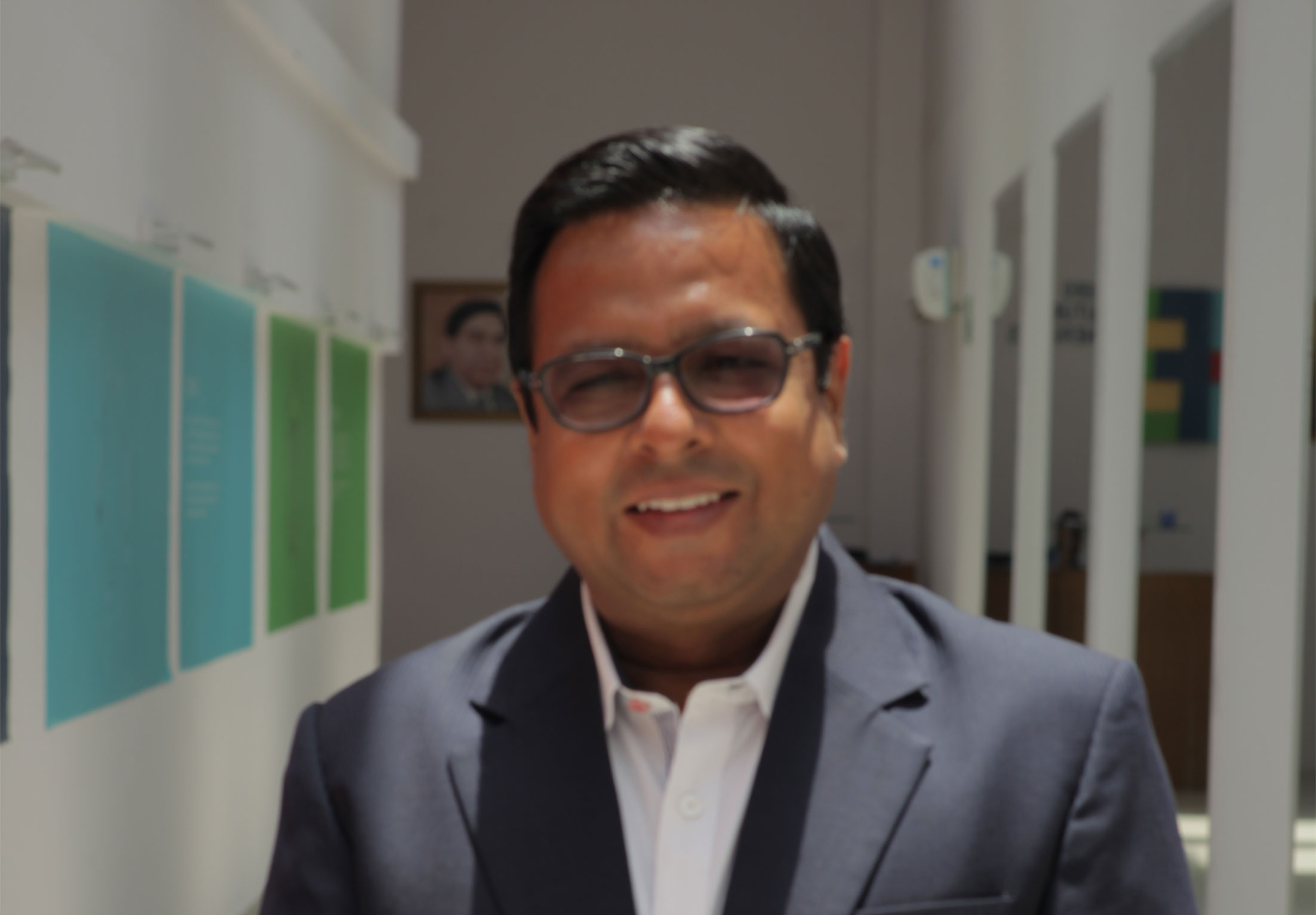 Primarily the origin of electricity was based upon rotating a conductor in a magnetic field in such a way so as to cut across the lines of magnetic force.With the growing need of conservation of electricity via stored charges and to be conveniently discharged at the time of need, batteries evolved and catered to energy requirement to some extent. At that time, no one ever thought of generating electricity using any alternative technology.It was later on that eminent scientists came up with the novel idea to generate energy with help of battery via constant chargeable sources.And thus,solar cells came into existence. Though solar cells appear simple to comprehend in comparison to rotating generators, but it is actually the other way round. The principle behind electricity generation in solar cells involves light photon, ionisation and electronic battery theory.

To set the backdrop of the sequential explanation of our key concept, let us approach it from the basic level. 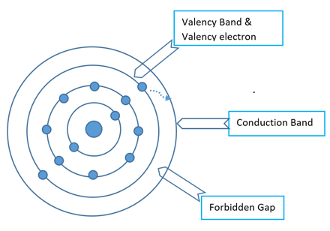 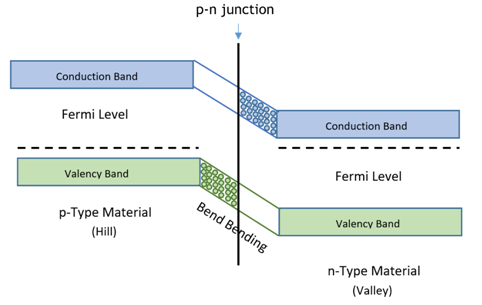 Now illustrating the complete cycle of electricity generation in solar cells sequentially with the help of a detailed diagram. 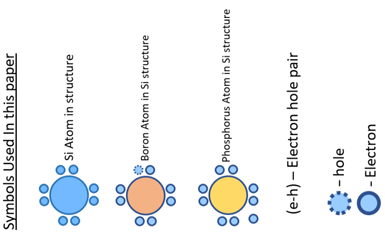 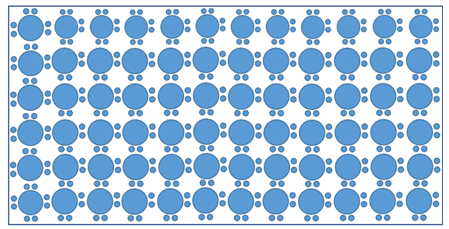 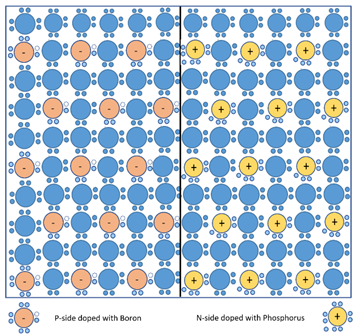 Step 3 : After hiding Si atoms fromatomic structure in all these images, only impurities atoms are visible. 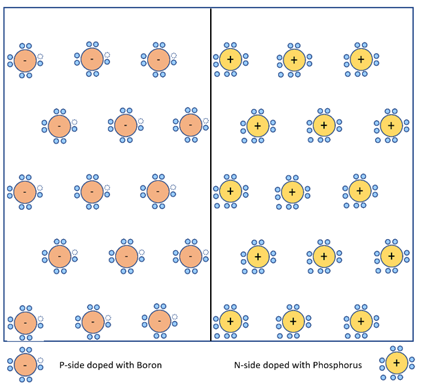 Step 4 : Once the p-type and n-type materials are combined, electrons of n-side are attracted by holes of p-side and cross the junction to get neutralised. This resulting in net charge, due to imbalance in number of electrons and protons present in that atom of doped material, i.e.in atomic structure of each side of the junction. 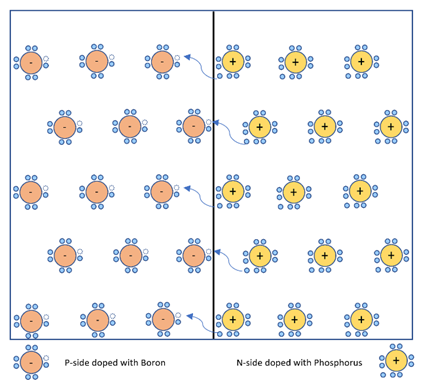 Step 5 : This process is called diffusion. The free electrons cross the junction from n-side and provide extra electrons to the atoms on p-side by filling holes in p-side atoms. The atom that gains extra electron at p-side has more number of electrons than protons. When an atom gains an extra electron from outside, it becomes a negative ion. Similarly on the other side, atom becomes positive ions. Because of ionisation net positive charge is built up towards the n-side of p-n junction and net negative charge gets built up towards p-side of the junction. This charge barrier across the p-n junction is called depletion layer and induced electric field is developed. This resembles a lightly charged battery.

Remaining free electrons and holes are prohibited to cross the junction due to charge barrier and flow within their available area.

Step 6 : When this composite material is placed in sunlight and a light ray strikes at the p-n junction junction, it penetrates the layer of n-type material and transfers the photo energy to the electron of Si atom near the junction. Thus, electrons get excited and jump into conduction band. 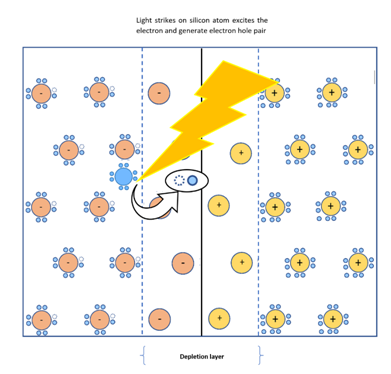 This develops an electron-hole (e-h) pair. The separated electron from Si atom is highly energised and gets attracted by positively charged layer across the junction and moves very fast to n-type material and reaches the surface of n-type material where it is collected by metal fingers. Similarly, due to the presence of electric field, hole from same (e-h) pair moves very fast to the opposite direction of electron to meet again and gets collected by metal plate at the bottom of p-type material.

If any wire is connected across the metal finger of n-type and metal plate of p-type, current starts flowing. This phenomenon is the concept behind solar battery. 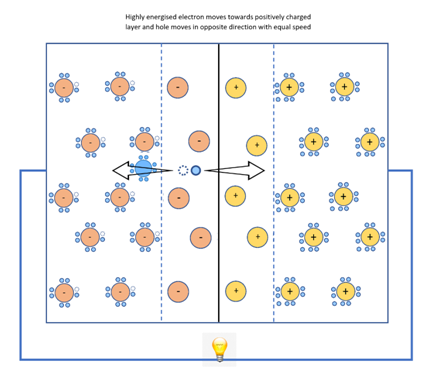 The efficiency of any cell increases depending on the amount of charge it collects. This is how the magic of electricity generation was conceptualised without any rotation of magnetic parts.

Transition of electrons for all the three categories of elements:

From an electrical point of view, the first category of elements are conductive in nature with the range of conductivity depending upon their atomic structure e.g. gold is a better conductor than iron.

The second category of elements are non-conductive in nature i.e. they are complete insulators.

Atomic theory behind the solar cell 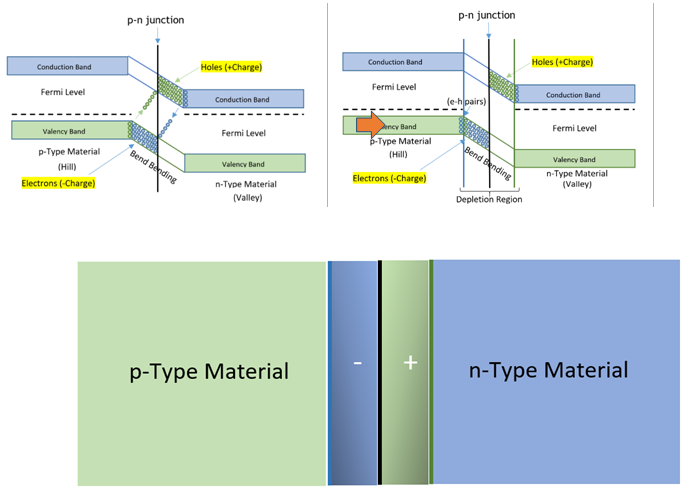 With the migration of electrons from n-side, by crossing the junction, it provides extra electrons to the atoms on p-side by neutralising holes.This creates negative ions resulting in atoms of p-type material gaining extra electrons in comparison to available protons in neutralised junction. This happens until electron gets diffused in p-type material and becomes ionised as negative and creates a negatively charged layer. Similarly, each free electron that left the atom from n-side to fill a hole in p-side atom creates a hole at n-side and neutralises electron to create a positively charged layer across the junction. This phenomenon is called diffusion and it develops the electrostatic charge across the junction.

Now when sun light strikes the junction of the cell, it excites electron of Si atom which jumps into conduction band i.e. separates from atom to conduct.In parallel a hole is also generated, and this is called (e-h) electron hole pair. This electron in conduction band of p-type material is attracted towards n-type material and because of high energy it moves with speed towards the surface of n-type of material and is collected by metal fingers. In parallel, the hole in p-side which is in pair with electron is repelled by the positive charge of n-side and moves towards the surface of p-type material and gets collected through metal plate at bottom. If there is a wire with load connected between these two,then current starts flowing.