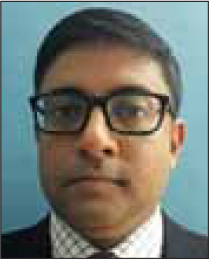 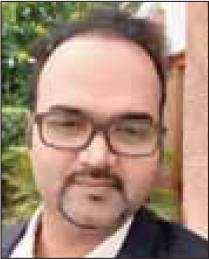 Renewable energy capacity in India is currently being added mainly through the competitive bidding route, wherein both the developer and the buyer enter into a long-term power purchase agreement (PPA). In recent years, issues related to forced curtailment of renewable energy, payment disputes and long-term PPAs being renegotiated have been on the rise.

Following global trends, innovative market models are becoming crucial to address current disputes and to accelerate renewable capacity addition. In the US CAISO (California independent system operator) market, renewable energy trades and competes with thermal and has resulted in an increased green component in the spot market. 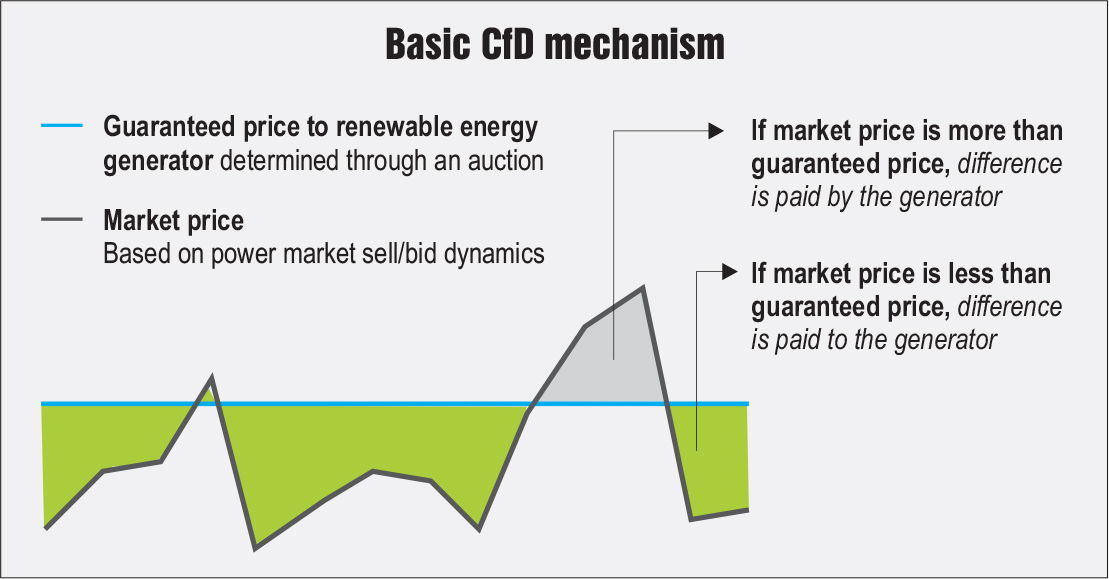 The experience of advanced economies shows that establishing an efficient, transparent and liquid market is crucial for the accelerated development of renewable energy. Countries such as the UK, the US (California) and Germany were able to increase renewable energy penetration to more than 20 per cent by shifting away from regulatory incentives/subsidies to implementing market-based reforms (such as CfD) to facilitate renewables’ integration into the grid. 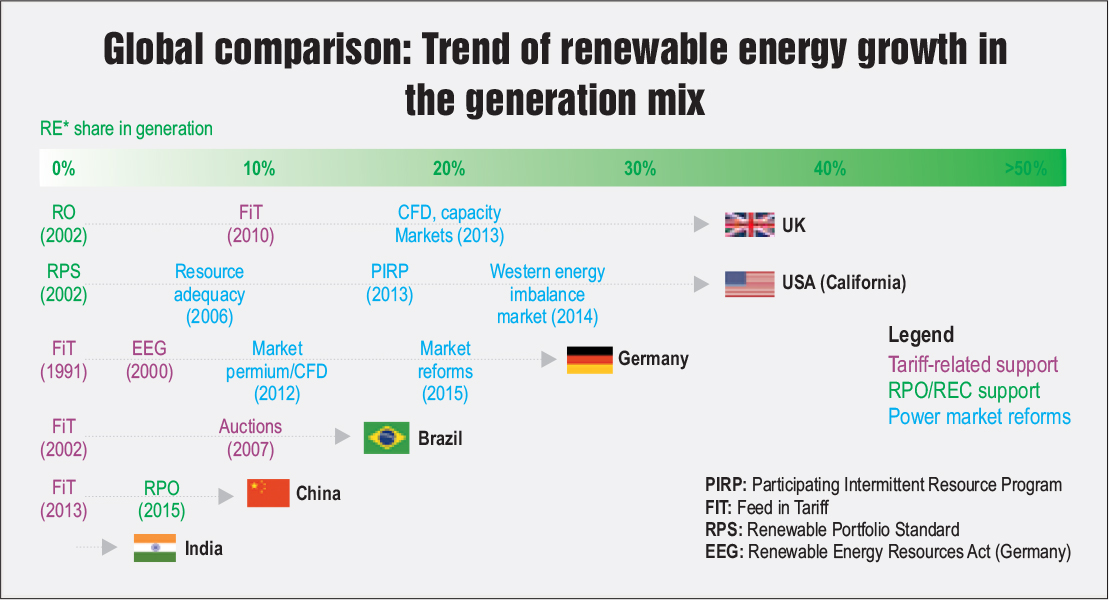 The CfD model has been adopted by the UK, Germany, Australia, France, Italy, Portugal, Sweden, Spain and Switzerland.

In India, almost 88 per cent of the power generation comes from long-term PPAs, so customisation of the CfD model is needed to align it with the existing market and facilitate smooth integration of renewable energy. Some of the suggested market-based CfD models, that can be implemented in India are given below. 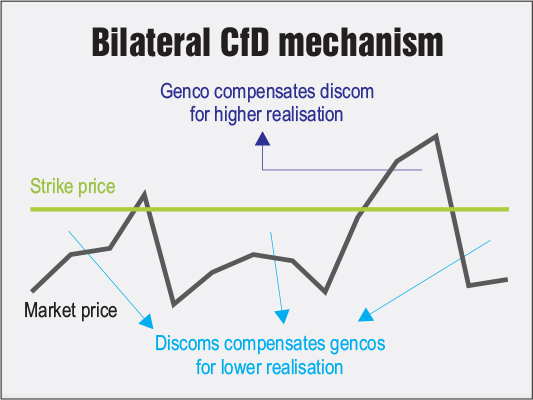 In the bilateral CfD model, auction is conducted through nodal agencies for the development of specific renewable energy projects. The generator enters into a PPA with the nodal agency at the auction-discovered tariff (strike price) and the nodal agency executes a back-to-back power supply agreement with the beneficiaries (discoms). The selling and scheduling of renewable energy generator is done through the power exchange. If the discovered market price (MCP) is more than the strike price, then the generator pays this difference to the discom; and if the market discovered price is less than strike price, the discom pays this difference to the generator. The tenor of the PPA under CfD may be decided by the government as appropriate.

The bilateral CfD model aims to protect developers’ investment risk by assuring a guaranteed price and scheduling through the exchange will ensure timely payment to generators, thereby, improving their cash flows and bringing down the requirement of working capital, which will ultimately reduce the generation cost. It is pertinent to note that the southern and western states in India being renewable energy-rich states and with energy curtailment taking place, it becomes relevant to facilitate an interstate platform for competitive and efficient sale of renewable energy. To this end, bilateral CfD can play an instrumental role in facilitating a rational investment of renewable energy (in states with higher renewable energy potential, especially the southern and western states) without being at risk of a forced curtailment.

For discoms, CfD allows the flexibility to schedule/absorb “must-run” power as selling and scheduling of it is through the power exchange. This helps discoms in load balancing and reduces exposure to deviation settlement mechanism (DSM), and at the same time, reduces (strike price-MCP) compensation burden on the unscheduled “must-run” generation. 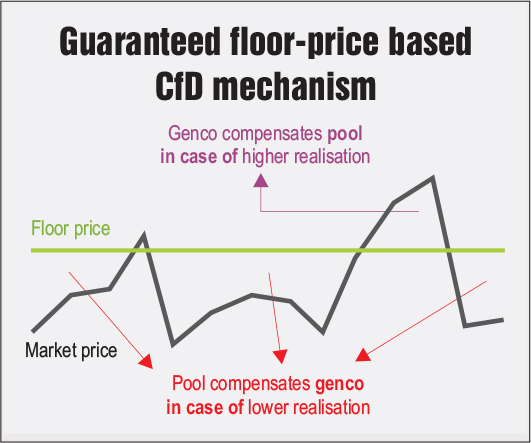 Another version is guaranteed floor price-based CfD. In this model, a guaranteed floor price is declared for renewable energy projects by the government through auction conducted by the nodal agencies. A PPA is executed with the generator at the guaranteed price and renewable power is scheduled and traded through the exchange. The sharing of upside gains between the genco and discoms can be graded and slab based and for the downside risk, the generator will remain protected through PPA. The tenor of the PPA under CfD may be decided by the government as appropriate.

Bilateral CfD and guaranteed floor price-based CfD should be the initial models to develop a green market and instil confidence among renewable energy developers and lenders. Once we have enough liquidity in the green market, we can move towards a pool-based CfD model. In this model, the nodal agency holds auctions for setting up renewable energy capacities as per states’ requirements. Generators execute PPAs with the nodal agency at the discovered auction price. Discoms execute PPAs with the nodal agency at the pool price, which is dynamic and is expected to have a decreasing trend with the addition of cheaper renewable energy capacity, going forward. In this model, discoms pay/ receive the difference between the pool price and market price into a central pool, and similarly, this difference is paid to/by generators from/to the pool.

The pool can be managed by a government entity with a good credit rating. Apart from discoms, the CfD mechanism can be offered to commercial and industrial (C&I) buyers. The tenor of the PPA can be decided by the government as appropriate. This model is adopted in most of the high renewable energy-penetrated markets. It is also best suited to facilitate a gradual integration of newer technologies such as battery storage system, pumped hydro storage and offshore wind, without giving a tariff shock to consumers and spreading the impact of costlier technologies over a larger consumer pool.

As we get more investments lined up for the renewable energy sector, it becomes imperative to bring renewable energy into the market as well as merchant power so that it becomes instrumental in giving a market signal for new investment and developers can start investing even outside long-term PPAs or with partial untied capacity. Along with bilateral CfD, a certain capacity of the plant can be kept as merchant and the remaining can be under a long-term PPA. In the next 10 years, a trajectory may be developed to make a transition from a 100 per cent PPA model in 2020 to a 100 per cent merchant/market-based model by 2030, in line with global markets/advanced economies.

Advantages of the market-based CfD model:

Payment security: Any trade scheduled in the market is backed by advance payment, resolving the payment security concerns of generators and the working capital requirement.

Discovering competitive price: A market enabled model will help in discovering a competitive price of power based on the marginal cost of each generation source and provide long-term/short-term price signals for future capacity addition. 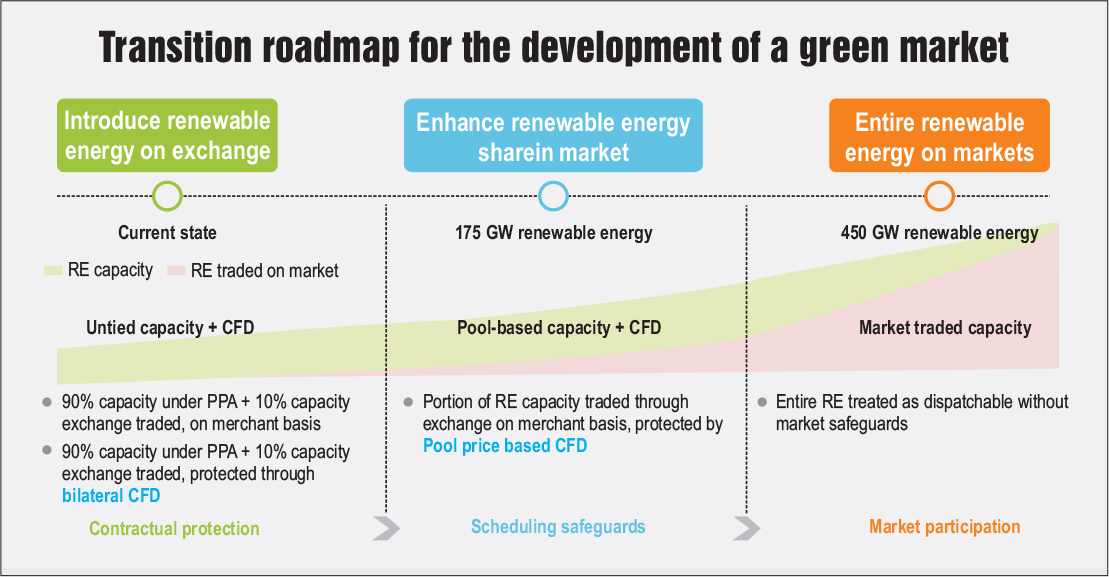