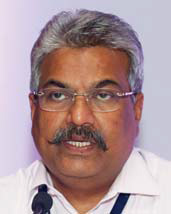 Solar and wind power development has been witnessing a slowdown with undersubscribed tenders due to low tariff caps, especially in the face of unfavourable market conditions. Thus, the government recently decided to do away with tariff caps in solar and wind power tenders. In doing so, it hopes to boost the bidding activity and investments in these segments. Against this backdrop, Renewable Watch talks to K.V. Sajay, president – solar, wind and regulatory affairs, Hero Future Energies, regarding the need for removal of tariff caps and the way forward. Excerpts…

The competitive bidding mechanism in India with tariff caps is one of the best in the world. Unfortunately, factors like payment delays from discoms, grid curtailment, lack of proper payment security mechanisms and issues in land acquisition create significant problems for solar and wind power developers. The majority of independent power producers (IPPs) have been witnessing internal rate of return (IRR) leakages due to these factors. Thus, over the past one or two years, IPPs have starting bidding at the same tariffs as the caps in the tenders.

The reason IPPs were demanding the removal of tariff caps was that their portfolios are getting damaged as they are unable to meet IRRs that they had initially assumed at the time of bidding, due to delays in payments from state discoms. For instance, Andhra Pradesh has not been paying many IPPs for more than 18 months, and even now, it has agreed to pay only 50 per cent of the agreed tariff. Many of these IPPs have as much as 500 MW of capacity in the state, which severely affects the viability of their portfolios. In addition, these IPPs have to repay their loans taken from lenders at an interest of 10-11 per cent. Thus, the problem is mainly due to state discoms, which leads to the undersubscription of state tenders. Most IPPs are willing to bid in the Solar Energy Corporation of India (SECI) or NTPC tenders mainly due to proper payment security, even if SECI or NTPC have signed power sale agreements with weaker discoms. Thus, tariff caps in SECI or NTPC tenders do not hurt IPPs.

We feel that if responsible nodal agencies at the state as well as central levels can plug payment issues, deemed generation and land constraints, then there is actually no need to do away with tariff caps for solar power. In the case of solar power, technology upgradation in modules and inverters is happening at a faster pace with improvements in efficiency and a decline in production costs. With prices of key equipment reducing every quarter and capacity of modules and inverters increasing, there is a drop in the balance of systems cost as well. Thus, the overall project costs and tariffs are reduced, which makes it easier for IPPs to achieve 15 per cent minimum IRR as per the Central Electricity Regulatory Commission (CERC) guidelines. Also, most top manufacturers have similar components and prices for solar components, and only differ in design and engineering. Thus, IPPs usually have similar tariffs for a solar project. In addition, if there is a cap of Rs 2.50-Rs 2.60 per kWh in a solar tender and an IPP feels it would not meet a 15 per cent IRR, it would just walk out of the tender.

When it comes to wind power, the situation is totally different. Wind power tariffs for a project are highly dependent on the wind turbine being used and the wind conditions onsite. India has lower wind speeds when compared to Europe and the US. Thus, the turbines have 120 metre diameter rotors and 140 metre hub height, with a power capacity of 2 MW here, instead of the larger capacity machines being used elsewhere. These 2 MW turbines are more suitable for giving tariffs of greater than Rs 3 per kWh. The majority of the top wind turbine manufacturers in the country are stuck with these turbines, and they cannot upgrade to higher capacities even if they want to, due to large inventories of the older turbines. Manufacturers had expected an annual market of 10 GW for wind power like solar power, in order to achieve the 175 GW renewable energy target by 2022 and had planned their production volumes accordingly. However, discoms started shying away from signing wind power purchase agreements due to higher tariffs when compared to solar power.

We feel that for wind power, tariff caps need to be removed for some time or for a certain capacity like 3-5 GW and brought back, till manufacturers liquidate their inventories. Then neither IPPs will have to take a hit on their IRRs nor will the manufacturers have to sacrifice their margins. Also, once inventories are cleared, wind power manufacturers can focus on technology upgradation so that wind power is able to compete with solar power and there is no issue of wind power offtake.