Karnataka has been focusing on solar energy for the past few years and has added many new projects in the segment for its further development. In order to promote the uptake of solar power, the state released the Karnataka State Solar Policy 2014-21, which has been amended thrice so far. This policy as well as the completion of the Pavagada ultra mega solar park helped the state in surpassing its solar target. Karnataka Renewable Energy Development Limited (KREDL) and the Solar Energy Corporation of India (SECI) formed a joint venture company, Karnataka Solar Power Development Corporation Ltd (KSPDCL), in March 2015 to set up solar power projects in Karnataka. In October 2015, KSPDCL’s proposal to construct a solar power park in Pavagada was approved. The project is spread over 53 square km, spanning five villages of Balasamudra, Tirumani, Kyataganacharlu, Vallur and Rayacharlu. The last 200 MW capacity, developed by SB Energy, was installed in December 2019, making it the world’s largest photovoltaic power station, with a functional capacity of 2,050 MW. Of the total capacity, NTPC implemented 600 MW, SECI 200 MW and KREDL 1,250 MW. 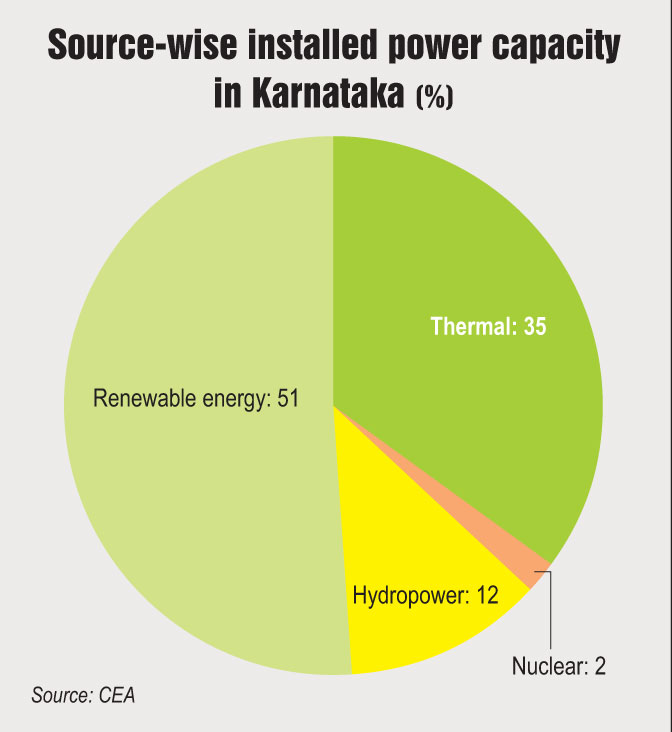 Having achieved its solar target, Karnataka is not developing any new utility-scale solar projects. In a letter issued in March 2019, the Karnataka Electricity Regulatory Commission (KERC) directed Karnataka Renewable Energy Development Limited to halt further bidding for procuring solar energy. In the letter, the commission observed that given the power-surplus situation, the state will have to restrict procurement from high-cost sources. For the financial year 2020, the government has set solar and non-solar renewable purchase obligations (RPOs) at 7.25 per cent and 10.25 per cent, respectively. The next two financial years will see the solar RPO increase 8.75 per cent and 10.50 per cent each year. As per the letter, the state discoms have already contracted enough capacity to meet its RPOs for the next few years.

The solar segment is currently focusing on rooftop and solar pump projects. According to central government estimates, Karnataka has emerged as the best state in India for rooftop solar projects. A report titled State Rooftop Solar Attractiveness Index (SARAL) was released in August 2019. It put Karnataka, Telangana, Gujarat and Andhra Pradesh at the first, second, third and fourth positions, respectively. Karnataka, with a score of 78.8, was assigned the A++ rating. To promote the uptake of rooftop solar systems, the state has launched a comprehensive e-portal that acts as a single-window clearance for all applications.

Another driver for increasing solar uptake in Karnataka is the Smart Cities Mission. Of the seven smart cities under development in Karnataka, some have initiated solar projects in order to fulfil their energy demands through clean energy sources. Shivamogga Smart City Limited and Karnataka Neeravari Nigam Limited intend to use the irrigation canal networks passing through the city for solar power generation. It has decided to develop a 25 MW solar plant on the canal top of upper or lower Tunga canal through public-private partnership and supply the power generated to Mangalore Electricity Supply Company Limited. In October 2019, Tumakuru Smart City Limited invited bids for 1.86 MW of grid-interactive rooftop solar projects based on the RESCO model atop government buildings. The tariff cap for the tender was set at Rs 3.07 per kWh. In 2018, Tumakuru tendered 2.7 MW of grid-connected rooftop solar projects to be installed on government buildings in the city. The smart city of Hubballi Dharwad has also tendered rooftop solar capacity; amounting to around 1.36 MW across four tenders since 2018. In line with smaller capacity additions, Belagavi Smart City Limited floated a tender in October 2019 for around 467 kW of solar projects. 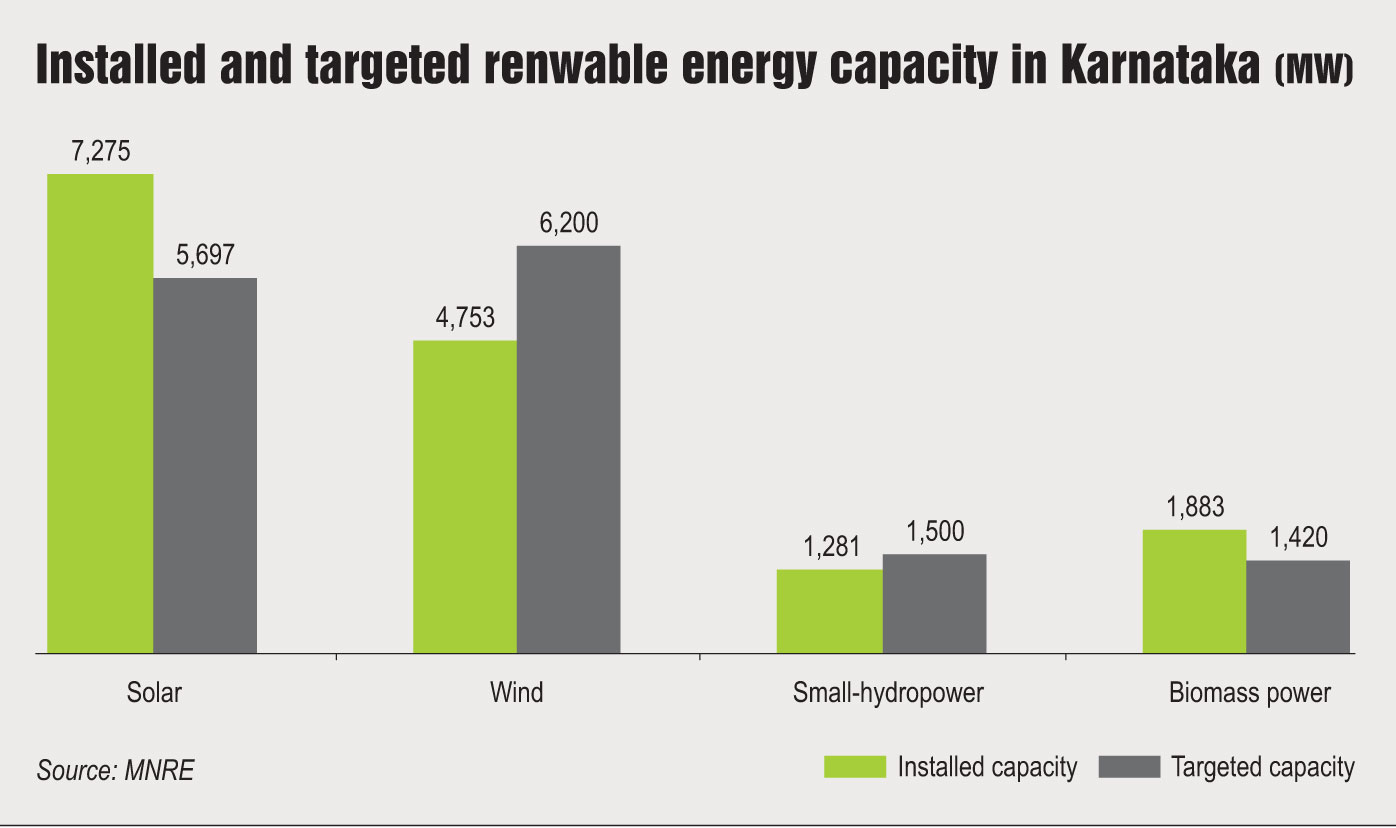 To meet its non-solar RPOs and harness the potential of renewable energy sources other than solar, the state introduced the Karnataka Renewable Energy Policy 2016-22. The policy aims to achieve a minimum capacity addition of 4,000 MW by 2022 in a phased manner, implementing projects for all forms of renewable energy sources (wind, wind-solar hybrid, small hydro, biomass, cogeneration, waste-to-energy and tidal). Another objective of the policy is to make Karnataka an investor-friendly state by promoting intra-state and interstate open access based business models such as captive and third party through wheeling and banking facilities. Some of the initiatives highlighted in the policy to revitalise the wind sector are repowering of old wind power plants, introducing hybrid renewable energy projects with a combination of wind and solar, encouraging farmers to set up wind power projects on their lands, and introducing gross metering for various consumer categories. The policy recommends that common power evacuation infrastructure needs to be created in the state and hence a mechanism to optimise the cost and space of electrical infrastructure should be introduced. It proposes to set up a centralised monitoring cell for better coordination and improved planning of renewable energy projects. Under the policy, a green energy fund called the Akshaya Shakthi Nidhi will be set up to facilitate renewable energy financing and energy conservation, by levying a green energy cess on the electricity supplied to industrial and commercial establishments.

Karnataka has also started developing wind-solar hybrid projects. In August 2018, Siemens Gamesa commissioned a 3.375 MW wind-solar hybrid pilot power project for NTPC. The project was installed in Bijapur, Karnataka. After the pilot level project, NTPC went on to initiate the process of developing a large-scale hybrid plant at Kudgi, Karnataka. In October 2018, it floated a tender for developing a 190 MW wind-solar hybrid power project at the site of its existing pilot project. In December 2018, the capacity was revised to 174 MW; this comprised 44 MW of solar and 130 MW of wind.  Earlier, the wind component was 60 MW. However, the project currently stands cancelled.

Hero Future Energies developed a wind-solar hybrid pilot project in the state, consisting of a 50 MW wind component and a 28.8 MW solar component. However, in order to avoid grid failures, only 50 MW was agreed to be evacuated. The power generated from this pilot project is supplied to industrial and commercial consumers in the state.  While average capacity utilisation factors (CUFs) for wind and solar power plants stand at 28 per cent and 18.7 per cent, respectively, for hybrid, the combined CUF is 41.8 per cent. This indicates yet untapped potential for wind-solar hybrid projects. Further advantages can be realised by adding a storage component to these hybrid plants. To this end, Greenko is in the process of developing a multi-GW scale integrated renewable energy storage project with grid connectivity in Saundatti. This project includes solar, wind and pumped hydro storage components.

Besides wind and solar power, Karnataka also has a high biomass potential. Currently, the bioenergy installed capacity in the state is 1,883 MW. Most of this capacity is in the form of bagasse cogeneration. The state is also harnessing waste-to-energy and to encourage new projects in this space, KERC has decided to retain the existing tariff for a period of one year from April 1, 2019 to March 3, 2020. The commission has extended the validity of the generic tariff for municipal solid waste (MSW) projects. A tariff of Rs 7.08 per kWh was set by the commission back in 2016, which was applicable to all MSW-based power projects that were commissioned between September 19, 2016 and March 31, 2018.

The state grid is fairly stable and there are no major transmission issues at present. However, with huge capacities of solar power being added in recent years, the share of intermittent power being fed into the grid has increased. Hydropower can act as a balancing source of power in this case. Power demand can also be balanced through ancillary services, although there are limited balancing reserves in the state. The state owns no gas reserves and only limited pumped hydro for balancing.

In spite of a huge renewable energy potential, the state is limiting further capacity addition due to low demand projections and insufficient corridor for inter-state sale. Additional thermal power capacity adds to this issue. There is significant capacity addition planned in conventional power in the next two to three years, which could introduce a huge surplus in the state, albeit with limited demand growth.