India’s rooftop solar segment has grown from a mere 3 MW in 2011 to around 2,300 MW as of December 2019. While this jump might seem significant, it is inconsequential when compared to the growth in the ground-mounted utility-scale solar segment, which grew from 480 MW to cross 31,000 MW during the same period. This huge difference in the installed capacities of the two segments is due to the larger size and scale of ground-mounted projects, which helped in bringing down solar tariffs in the country propelled by massive auctions. Meanwhile, rooftop solar is constrained not only by size, but also adoption-related challenges. Although initiatives in the form of subsidies and net metering regulations have been taken by the central and state governments to drive growth in the rooftop solar segment, they have not been able to generate the desired outcome. The most important of all policy interventions till date has been the introduction of net metering through which power consumers can make use of the two-way flow of power. On the one hand, they can generate solar power and feed it into the grid, and on the other, they can draw electricity from the grid when no solar power is generated, getting billed only for the “net” power consumed. This method acts as a driver for the adoption of rooftop solar among high-paying consumers, who are already paying a high price for conventional energy. Further, net metering reduces the risk of delayed payments by discoms. The majority of states have adopted net metering regulations and are constantly updating them to suit the market conditions.

In its landmark Rooftop Solar Power Plant Regulations, 2019, the Uttar Pradesh Electricity Regulatory Commission (UPERC) raised the cap for net metered rooftop solar plants from 1 MW to 2 MW in January 2019. The move was aimed at meeting the energy deficit of the state and reducing discoms’ technical and financial losses. However, the net metering facility has been limited to the residential and agricultural categories only while other consumer categories such as commercial and industrial (C&I) and public establishments can opt for gross metering. In doing so, the UPERC aims to rationalise benefits for both consumers and discoms. However, these regulations received a huge backlash from the industry as they severely restricted the growth prospects in the C&I solar segment. Thus, in August 2019, the UPERC granted a one-time relaxation and allowed 59 projects to avail of either net metering or gross metering. The Joint Electricity Regulatory Commission [JERC] for the state of Goa and union territories has finalised the net metering regulations. The new rules have been in effect since July 24, 2019 and are applicable to grid-connected rooftop solar, ground-mounted and floating solar power projects in Goa, the Andaman Nicobar Islands, Ch 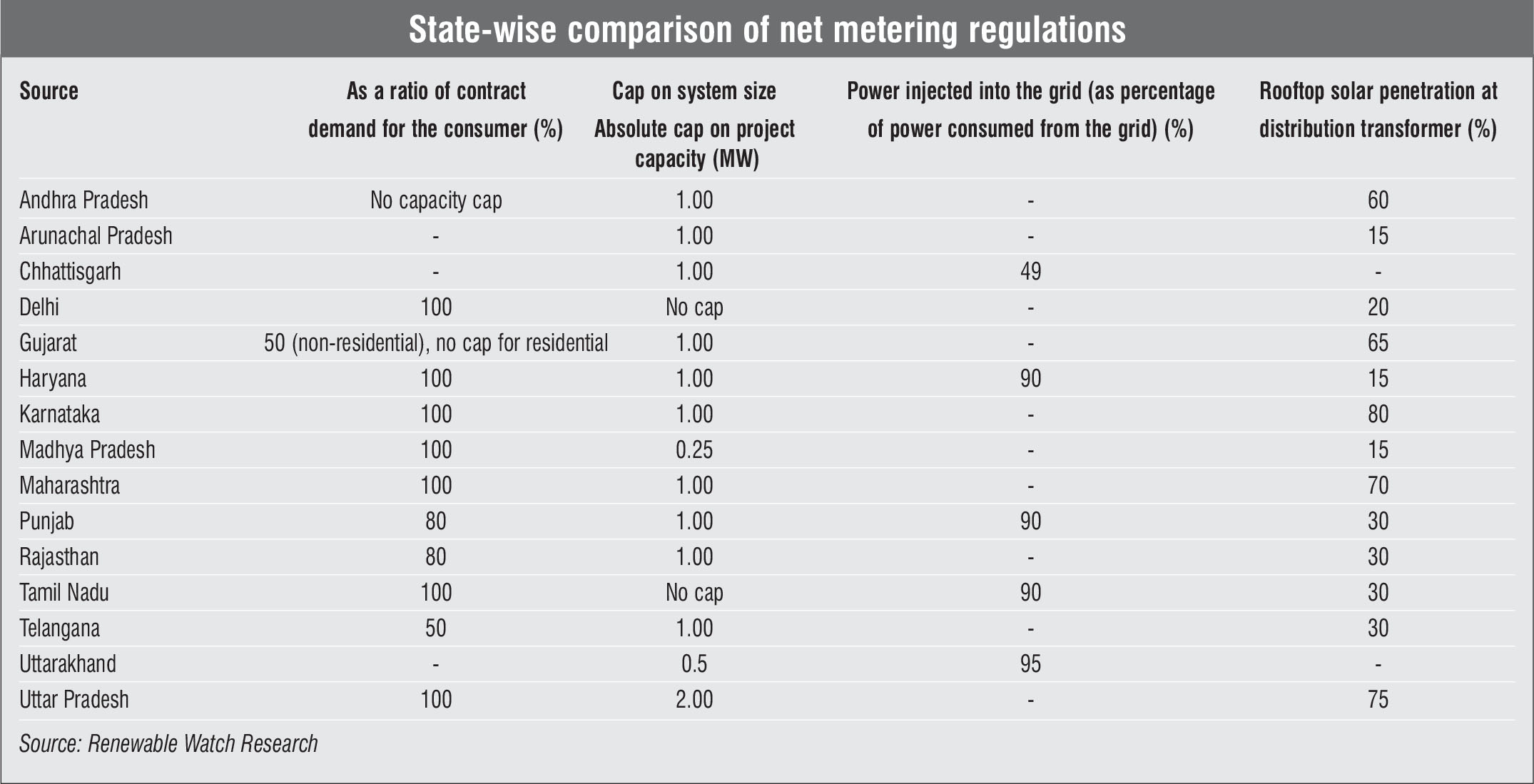 andigarh, Dadra & Nagar Haveli, Daman & Diu, Lakshadweep and Puducherry. These regulations also have provisions for group net metering, virtual net metering and third-party-owned solar projects, and are expected to promote the deployment of rooftop solar in the respective states and union territories. In November 2019, the Haryana Electricity Regulatory Commission (HERC) issued a revised version of its regulations for rooftop solar grid-interactive systems based on net metering. As per the HERC (Rooftop Solar Grid Interactive Systems Based on Net Metering) Regulations, 2019,  net metering facilities will not be made available to open access consumers, thus, providing a clear demarcation between open access and net metering. The regulations also state that discoms must provide net metering facilities to eligible consumers as long as their total capacity does not exceed 500 MW, up from 200 MW previously, thereby promoting greater uptake of rooftop solar. In late 2019, the Maharashtra Electricity Regulatory Commission (MERC) issued a draft of the net metering policy regulations, which drew strong criticism from industry experts. The reason was the MERC’s proposal to withdraw basic net metering facilities for C&I consumers which could have limited the benefits of rooftop solar.  In response to the uproar in the solar industry,  the MERC issued new regulations for net metering in January 2020. These will apply to net metering and net billing arrangements (gross metering), and grid-connected renewable energy generating systems tied to consumers’ electricity meters. According to the new regulations, the net metering or net billing arrangement will be permitted by distribution licensees on a non-discriminatory, first come, first served basis to eligible consumers that have already installed or are likely to install a renewable energy generating system connected to the discom’s network.

Although the past year saw some successful initiatives, the net metering experience has been quite varied across states. This is because the net metering framework of a state only determines the regulations, while its actual implementation is equally important. The easy accessibility to the net metering facility influences ground-level implementation and promotes rooftop solar uptake. However, many states face delays in approvals, insufficient capacity at the local utility level and a cap on the size of rooftop solar due to limitations on transformer capacity and sanctioned load. While many rooftops can accommodate more than 1 MW of power, there is a 1 MW limit for capacity as well as for net metering in most states. Approaching the regulators for a solution usually leads to a question of load study on transformers, which can become a long and complicated process for developers. However, in January 2020, the UPERC allowed Noida Metro Rail Corporation Limited (NMRC) to install 10 MW of rooftop solar power projects with a net metering facility, after the NMRC filed a petition asking the former to relax the 1 MW ceiling. The NMRC had stated that it wanted to install 10 MW of rooftop solar projects at 21 metro stations, depots and parking areas on the Noida-Greater Noida metro corridor. Even so, such instances are rare. According to industry experts, policy implementation has been robust in states such as Haryana, Rajasthan, Karnataka, Tamil Nadu, Delhi and Punjab; however, it remains challenging in many other states. For example, in Maharashtra, it is a must for developers to supply power to the grid on the HT side for small- to medium-size clients, which is not conducive for rolling out a large amount of rooftop solar. The progress and uptake of net metering has also been slow owing to poor implementation and lack of interest on the part of discoms. The process of getting net metering approvals remains bureaucratic in several states, leading to delays. However, in Chandigarh, the procedure for obtaining approvals is relatively efficient since it is digitalised. Another issue is that of policy instability. As seen in the case of Uttar Pradesh, the sudden withdrawal of the net metering facility for the C&I segment proved detrimental to rooftop solar uptake in the state. Uttar Pradesh has tremendous scope in the C&I rooftop space due to the paying capacity of these customers and, hence, it should allow net metering for this segment.

Net metering policies are crucial for rooftop developers as they make rooftop solar installations attractive and help the industry grow. Based on the government’s reply to a Lok Sabha question, the Ministry of New and Renewable Energy (MNRE) has already requested the concerned states to take appropriate action on issues being faced by solar power players through letters and review meetings. The issues related to net metering such as the capacity of rooftop solar allowed in terms of size, the percentage of electrical connected load of the beneficiary, and the category of beneficiary distribution transformer have been covered in these deliberations. The State Rooftop Solar Attractiveness Index (SARAL) was launched by the MNRE in August 2019, as a measuring scale to evaluate and rank all the states according to their performance, growth, level of maturity, policy framework, and implementation environment. While these efforts make the states more accountable for their rooftop solar progress, each state suffers from its own constraints due to discom health and poor availability of adequate power distribution capacity, which may affect the efficacy of these government interventions.

Going forward, the respective state discoms need to reassess the maximum permissible capacity allowed for net metering based on the local grid’s capacity to integrate rooftop solar, so as to not limit rooftop solar deployment. In addition, the task of the state regulators and the central government is to prevent policy paralysis and continue net metering incentives for C&I consumers for sustained growth of the rooftop solar segment.