The European Union (EU) has been making concerted efforts to establish an integrated, competitive and sustainable internal energy market in the continent. It has identified critical energy infrastructure projects, known as projects of common interest (PCI), to achieve the EU’s ambitious climate and energy policy objectives laid down in the Paris Agreement and the Energy Union Strategy (2015). The energy transition relies on an electricity system that entails renewables contributing over half of generation by 2030 and that is fully decarbonised by 2050. Electricity PCIs will also contribute to reaching the 10 per cent electricity interconnection target by 2020 and at least 15 per cent by 2030.

The projects on the PCI list, which is adopted every two years starting 2013, benefit from the set of tailor-made measures (in the form of simplified permitting and the right to apply for EU funding from the Connecting Europe Facility – CEF) under the Trans-European Energy Networks regulation to ensure their timely development. In a significant move, the fourth PCI list was adopted by the European Commission (EC) in the form of the Delegated Act on October 31, 2019.

“Europe’s energy transition is well under way, with record levels of renewable energy and rapidly falling costs. But Europe’s energy infrastructure must develop at the same pace and in the same direction to fully support this transition. That is why we are proposing to put the focus of the new list of projects, or PCIs, on key electricity interconnections and smart grids,” says Miguel Arias Cañete, EU commissioner for Climate Action and Energy.

The fourth PCI list encompasses 151 projects. including 102 in electricity, 32 in gas, 6 each in oil and smart grids, and 5 cross-border carbon dioxide network projects. Overall, the majority or 70 per cent of the projects cater to the electricity and smart grid segments, pointing to the increasing role of renewable energy in the electricity system and a growing need for network reinforcements.

There has been a declining trend in the number of projects included in the PCI list. The first PCI list, adopted by the EC in October 2013, comprised 248 projects. The aim was to strengthen the internal energy market. The second and third PCI lists were adopted by the EC in November 2015 and November 2017 and encompassed 195 and 173 PCIs respectively. The number of projects in the fourth list has further decreased, mainly due to a 40 per cent drop in gas-based projects (which fell from 53 to 32), reflecting the improved robustness of the EU gas grid in recent years. In the electricity sector, the number of projects in the fourth PCI list is similar to that in the third list (102 instead of 106); this is despite the fact that nine finished or at-the-commissioning-stage projects are not part of the new list. Smart grid projects have been increasing (the number went up from four to six). In fact, the share of electricity and smart grid projects vis-à-vis gas-based projects has improved substantially from 2:1 in the third PCI list to 3:1 in the fourth PCI list. Of the electricity PCIs in the new list, 21 projects have double labelling as electricity highways under three priority corridors (see Table 1). 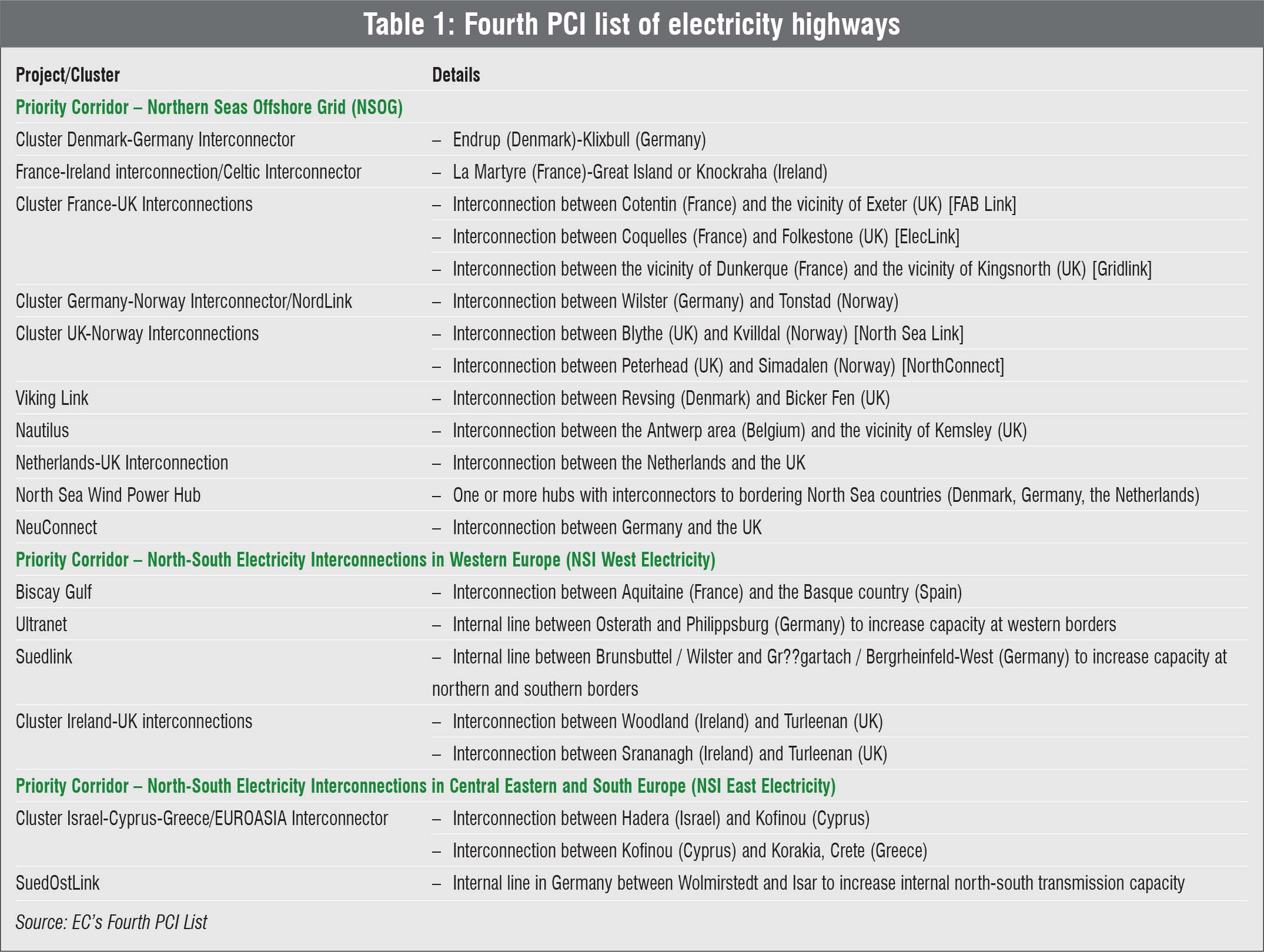 Overall, the selected PCIs will address specific infrastructure needs of the four priority regions mentioned below: In the North Sea region, the projects will further integrate the markets, thus overcoming the geographical barrier posed by the sea to electricity interconnections. The expected development of substantial additional offshore wind capacity as a result of this underlines the importance of ensuring free flow of power throughout the region.

In the western part of Europe, the electricity PCIs will help complete the integration of the Iberian Peninsula with the European electricity market.

In central-eastern and south-eastern Europe, the PCIs will strengthen the existing electricity grid and provide additional cross-border transmission capacity for the integration of renewable energy sources.

In the Baltic Sea region, as per the Baltic energy market interconnection plan, PCIs will further integrate the three Baltic states of Estonia, Latvia and Lithuania with the European electricity network and also remove the existing bottlenecks on the borders between them.

The two new electricity highways that have been included for the first time in the PCI list are the North Sea Wind Power Hub (NSWPH) and the NeuConnect Interconnector (between Germany and the UK). The PCI status will enable the NSWPH consortium, which is developing the project, to apply for funding from the CEF for undertaking studies to develop the concept further and bring the first hub-and-spoke project a step closer. The NSWPH consortium includes electricity and gas transmission system operators from Denmark, Germany and the Netherlands (Energinet, TenneT and Gasunie). The first hub is envisaged to be set up at a central location in the North Sea — the precise location is yet to be determined. The hub will transport offshore wind energy to the shore and also function as interconnection capacity for the connected countries. In addition, the consortium is exploring the use of power-to-gas solutions. Analysis by the EC shows that the hub-and-spoke concept provides significant cost savings compared with the current conventional approach of point-to-point interconnections and individual connections for offshore wind farms. Depending on further decision-making, the first hub could be operational in the first half of the 2030s.

The NeuConnect Interconnector will create the first direct power link between Germany and the UK, connecting two of Europe’s largest energy markets for the first time. Around 720 km of subsea cables will allow up to 1.4 GW of electricity to move in either direction by 2023. The Euro 1.6 billion project is privately financed and developed by an international consortium comprising Meridiam, Allianz Capital Partners and Kansai Electric Power with support from developers Greenage Power and Frontier Power.

The six smart grid projects involving eight countries have different focus areas. Broadly, these projects will increase the resilience of networks, the deployment of renewable energy projects and involvement in demand response mechanisms.

The latest PCI list will be submitted by the EC to the European Parliament and the Council for a two-month objection period (which is extendable once). The list will become effective if within this period neither Parliament nor the Council rejects it. It may be noted that they cannot make amendments to the list but simply accept or reject it.

Keeping in view the EU’s ambitious climate targets and long-term energy transition goals, concerted efforts are being made to create a well-functioning internal energy market. The recent PCI list highlights the importance of infrastructure for the Energy Union and signifies a balance among sustainability, affordability and supply security. As summed up by Maroš Šef?ovi?, vice president of the European Commission for Energy Union, “The union is a major driver of clean energy innovation in Europe. We are making sure that this energy transition is socially fair, leads to innovation and is based on smart infrastructure, which is adapted to the needs of the future energy system. Through PCI, we are building strong and well-connected networks across Europe to enhance security of supply.”