In early 2019, the Cabinet Committee on Economic Affairs approved the proposal to set up 12 GW of grid-connected solar PV power projects by government organisations under the Central Public Sector Undertaking (CPSU) Scheme Phase II. Under the programme led by the Solar Energy Corporation of India (SECI), government organisations will receive viability gap funding (VGF) support of Rs 85.8 billion to set up their solar power plants. The programme mandates the use of domestically manufactured solar PV cells and modules in line with the provisions of the Ministry of New and Renewable Energy (MNRE), thereby creating a Rs 480 billion investment opportunity in the manufacturing space.

Incentives aside, a large number of PSUs have been shifting to solar power owing to commercial considerations. Given that solar power is more economical than conventional sources of power, PSUs are setting up these projects in ground-mounted, rooftop and canal-based modes. A number of these organisations have set ambitious targets for increasing the share of solar power in their energy mix in the coming years. This opportunity is being leveraged by manufacturers as well as engineering, procurement and construction (EPC) contractors to set up ground-mounted, rooftop and off-grid projects either under the government scheme or on a private basis. 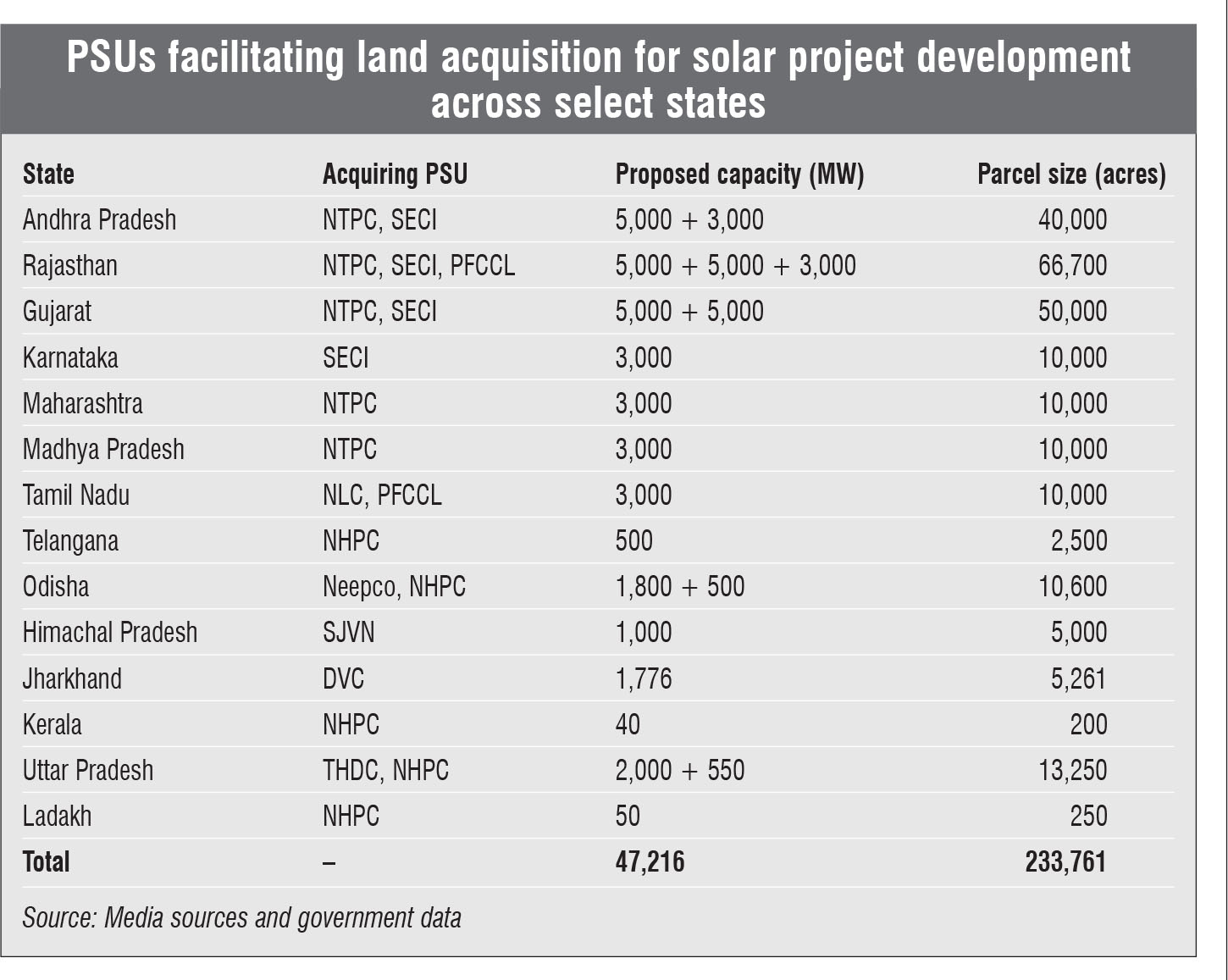 Besides developing their own solar portfolio, central PSUs will now play a larger role in facilitating large-scale solar project development. Under the plug-and-play model devised by the MNRE, central PSUs will acquire more than 200,000 hectares of land through  wholly owned special purpose vehicles (SPVs) to set up 47,000 MW of solar power projects. The land may be purchased outright or leased from state governments and private land owners. The state governments, too, can take full ownership of SPVs in suitable cases. Central utilities such as Power Grid Corporation of India Limited (Powergrid) will set up the transmission infrastructure at these locations. The move is aimed at de-risking projects by addressing land and transmission infrastructure availability issues and reducing tariffs by up to Re 0.20 per unit to accelerate solar capacity development. The model envisages solar parks of 2,000 MW capacity. Apart from this, projects in multiples of 600 MW will be allowed at multiple locations where new transmission lines have to be laid. At sites where transmission links already exist, projects will be allowed in multiples of 250 MW. Floating solar projects too are covered under the model, with a minimum size of 50 MW. 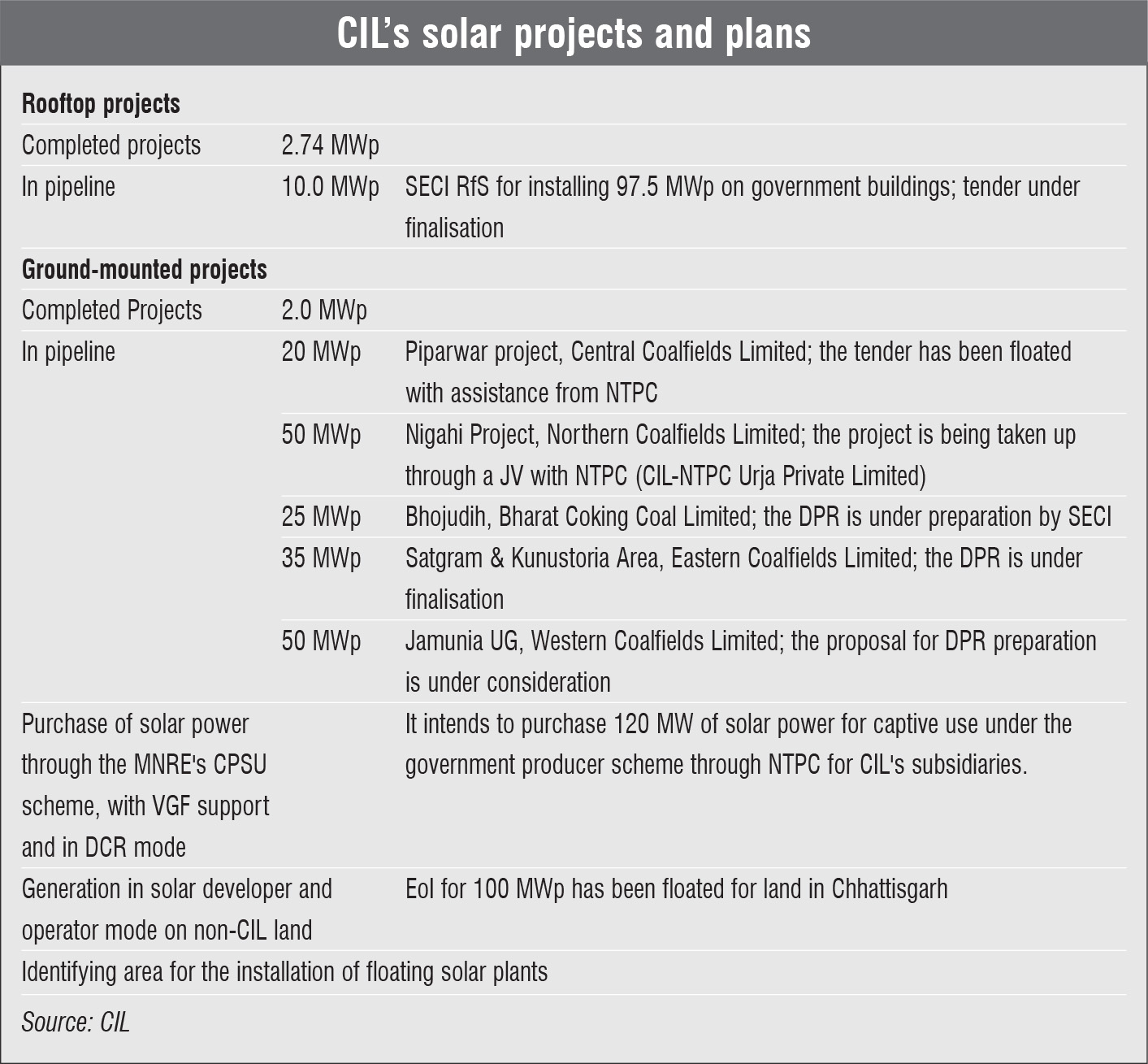 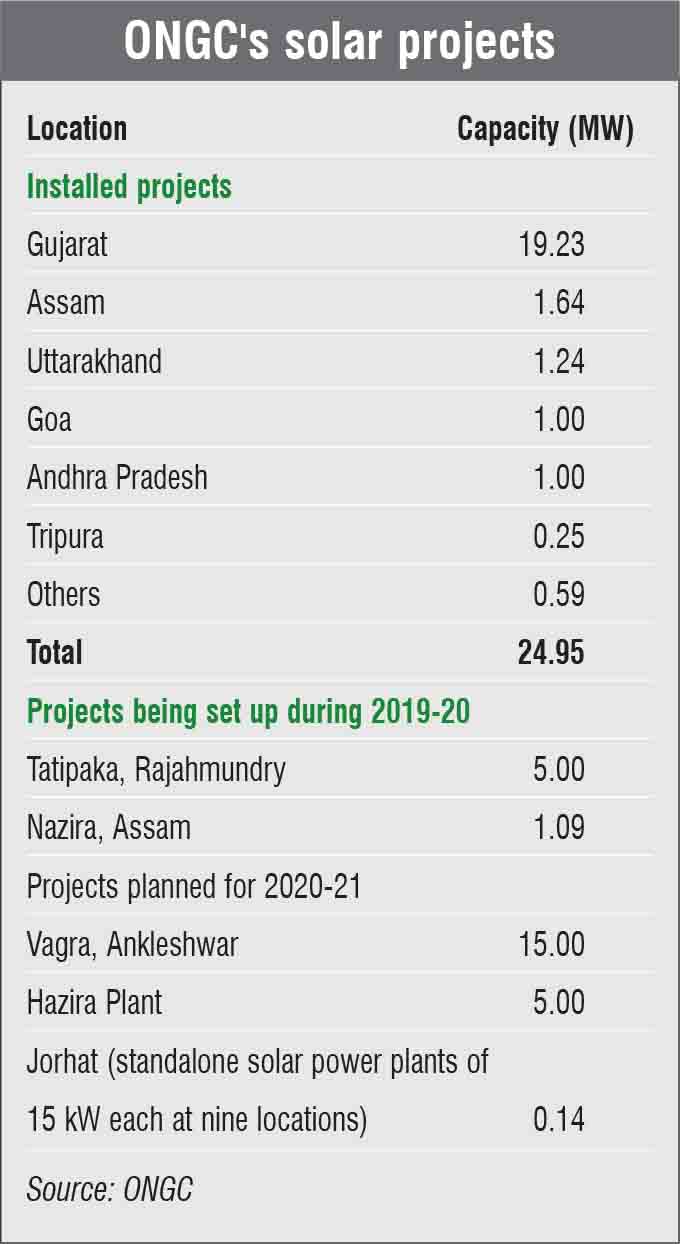 While SECI has been the only central PSU dedicated to the solar energy segment, there are a large number of non-solar-focused PSUs that have made remarkable progress in setting up and facilitating solar projects. Leading them is NTPC, the country’s largest power producer. It plays a dual role in the renewable energy sector, of a power generator and an intermediary procurer. The company has 920 MW of installed renewable energy capacity. In developer mode, it has around 3.5 GW of capacity. Meanwhile, 462 MW of NTPC-owned capacity is under construction and over 2 GW of capacity is at various other stages of development. NTPC is also an early mover in floating solar in the country. Recently, it has placed orders for 217 MW of projects. The 100 MW floating solar project being implemented at Ramagundam will be the largest floating solar project in India. Overall, NTPC is working towards increasing its renewable energy portfolio by 30-40 GW by 2032.

CIL is another power sector PSU striving to become a net zero energy company by producing 3,000 MW of solar energy for captive use. In order to develop this capacity, CIL will require around 60 square metres of land, out of the 300 square metres of vacant, unused and barren land under its possession. The PSU is geared up for a capital investment of about Rs 120 billion ($1.6 billion) in the next four years. It has partnered with various companies including NTPC, SECI and NLC to develop solar projects in the rooftop, ground-mounted, storage and floating solar categories.

Another large PSU expanding its solar presence is Indian Railways, which consumes around 2 per cent of the country’s overall power production. Indian Railways plans to be a net-zero carbon emitter by 2030. To this end, it intends to increase the use of renewable energy in its operations. It has set an internal target to install 1,000 MW of solar power projects and 200 MW of wind power capacity. So far, Indian Railways has commissioned 81 MW of rooftop and ground-mounted solar projects and 53 MW of wind projects. Going forward, a 50 MW solar project, slated to begin in 2021, will be set up in Bhilai by Railway Energy Management Company Limited. Projects that are expected to be installed by March 2020 include the 1.7 MW Sukhi-Siwania solar plant for West Central Railway and a 2 MW solar plant at Diwana for Northern Railway.

In the mass transit space, metro operators such as the Delhi Metro Rail Corporation (DMRC) are spearheading solar power development. DMRC has installed 32.4 MWp of rooftop solar capacity as of December 2019, and plans to install a total of 50 MWp by 2022. While most of its projects have so far been set up on rooftops, the organisation is now exploring ground-mounted projects on land parcels that will not be required for any other development activity over the next 25 years, according to DMRC. But the focus will remain on project development with minimal land requirement given that land in Delhi is scarce as well as expensive. Further, while other metro corporations have more or less stuck to RESCO-based rooftop solar projects, DMRC has become the first commercial consumer of its scale and size to procure solar power from another state through the open access route.

In April 2019, DMRC started its procurement of 99 MW or 345 MUs of solar power from the Rewa Ultra Mega Solar Park in Madhya Pradesh. This 345 MUs of solar power is being used to meet the energy demand of DMRC Phase III. After incorporating the applicable open access charges, DMRC expects to pay a tariff of around Rs 4.50 per unit, resulting in significant savings for the bulk consumer. Although DMRC had to overcome many hurdles before the project finally took off, it has opened up avenues for other metro rail corporations to procure renewable power through open access arrangements. In fact, DMRC has been ahead on the technology curve. It is already planning to test bifacial and new thin-film technologies under Phase IV of its solar power development programme. “We plan to use these technologies for solar installations via ducts and foot over bridges,” says Manuj Singhal, chief engineer (electrical), DMRC. 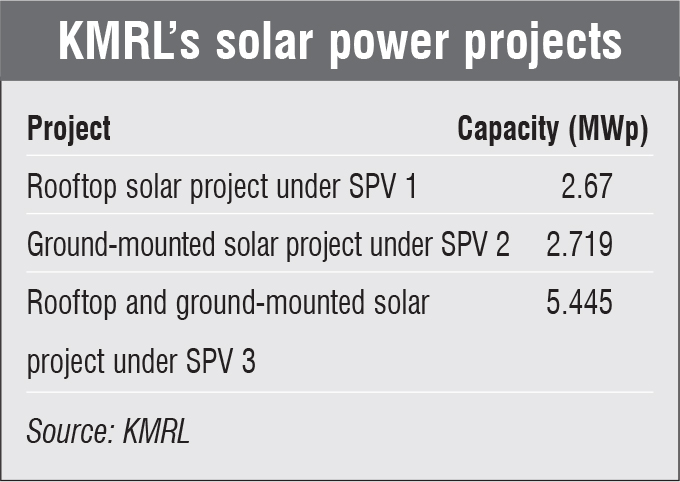 Meanwhile, the Noida Metro Rail Corporation is implementing rooftop solar projects at all its 21 stations. Kochi Metro Rail Limited (KMRL) is also planning extensive solar deployments on an additional 2.5 hectares of land by 2020. The power generated will be used for all the stations, depots and 13 buildings of the metro corporation.

Oil majors like ONGC have also announced several solar tenders for captive power plants in the past year. In January 2020, it floated a tender for the development of a 5 MW project along with seven years of operations and maintenance (O&M) on its premises in Gujarat. Prior to that, in November 2019, ONGC floated a tender for the construction and installation of a 15 MW solar project at its Vagra site in Bharuch district of Gujarat. In August 2019, ONGC Mangalore Petrochemicals, a greenfield petrochemicals project promoted by ONGC and its subsidiary, Mangalore Refinery and Petrochemicals Limited, invited bids for a grid-interactive floating solar project of 2 MW to be installed on its premises. ONGC’s renewable energy cell was constituted in 2016, but it has been using solar power applications since the 1980s with its first solar project commissioned in 2008. Currently, it has around 25 MW of installed capacity across seven or eight states including remote locations such as Tripura and Silcher. The utility has set a target to add 5 MW of capacity every year, but given the number of tenders being floated by ONGC of late, it is set to exceed its target by a significant margin.

Together, PSUs across industry verticals have emerged as key stakeholders in the solar value chain. This segment will not only help achieve the solar capacity addition target of 100 GW by 2022 but also holds the potential to resolve some of the biggest challenges in the renewable energy sector relating to land and transmission constraints.