India is looking at an investment of about $100 billion to achieve the renewable energy target of installing 175 GW by 2022. Of this, about 30 per cent is to be procured through equity and 70 per cent through debt. The current state of the banking sector in India is precarious. Many banks are under prompt corrective action, leaving only a handful to furnish debt for various sectors. As a result, limited funds are available and few projects are able to find the requisite financing. Meanwhile, high interest rates charged by banks due to the perceived risk of renewable energy projects make the situation worse. This puts the onus of funding essential projects on non-banking financial companies (NBFCs). The Indian Renewable Energy Development Agency (IREDA) is one such NBFC that is spearheading renewable energy financing in the country to drive capacity installations. IREDA is a Miniratna Category I PSU under the Ministry of New and Renewable Energy. Set up in 1987, the company has been engaged in developing projects in the alternative energy segment and extending financial assistance to them. In 2018-19, the company mobilised funds of around Rs 10.1 billion with private placement in the Indian market. It also raised around Rs 1.5 billion through the placement of bonds in the sector. A look at IREDA’s recent developments, achievements, challenges and outlook…

According to Chintan Shah, director (technical), IREDA, the agency’s exposure in the sector stood at Rs 210 billion as of March 2019. The exposure is leaning more towards solar as compared to wind, as opposed to a balanced portfolio in the previous year. IREDA sanctioned a total capacity of 3,266 MW during the year by way of sole financing, co-financing and consortium financing. This included 2,675 MW of solar, 515 MW of wind, 21 MW of cogeneration, 5 MW of hydropower, 44.8 MW of waste-to-energy and about 4 MW of biomass capacity. Of the total capacity commissioned by IREDA during the year, about 500 MW was in the solar power segment, 723.7 MW in wind and 28 MW in the cogeneration segment.

During 2018-19, IREDA sanctioned about Rs 15.2 billion of its total loan amount for the wind power segment and about Rs 57.5 billion for the solar segment. At the same time, disbursements in the wind and solar segments stood at Rs 15.5 billion and Rs 38.3 billion respectively. Other segments that received loan sanctions and disbursements from IREDA include hydropower, biomass and cogeneration and waste-to-energy along with energy access, energy efficiency and manufacturing projects.

IREDA raised a large sum through various bond issuances during the year. One of the early proponents of green bonds, the agency raised Rs 8.6 billion through taxable green bonds in the domestic market along with Rs 1.5 billion raised via subordinated taxable bonds. In addition, it raised around Rs 22 billion as lines of credit from various international sources including the Japan International Cooperation Agency, KfW Asian Development Bank, Agence Française de Développement and the World Bank. Meanwhile, term loan facilities of Rs 2 billion and Rs 10 billion were signed with HDFC for a period of three years and the State Bank of India for 5.5 years respectively.

On the emergence and growth of the bond market, Shah opines, “The future of finance undoubtedly lies in bond markets. The global market is doing well at present but the Indian market lacks the required depth. That said, over the past three years, a niche bond market has emerged, which will take some time to mature. The renewable energy sector will have to rely on the Indian bond market as there is a huge amount of capital available in this space. It only requires the right instruments and platforms to channelise the capital from these bond markets into the renewable energy sector. IREDA has been raising domestic bonds essentially on the debt side and we have been fairly successful in that.”

In 2018, the Cabinet Committee on Economic Affairs had approved the issuance of fresh equity shares through an initial public offering (IPO). However, before the validity of the approval expired in February 2019, only the draft red herring prospectus had been filed and the IPO had not been carried out. In October 2019, IREDA again received approval for floating its IPO, but refrained from doing so. This was in line with the prevailing trend of IPOs in the renewable energy sector being pushed back owing to bearish capital market sentiment and low valuations.

IREDA is planning to set up a “green window” for financing renewable energy projects by creating a $100 million fund. Of this, about $20 million will be allocated by IREDA and the remaining by other agencies. The green window will facilitate the underserved clean energy markets and help scale up new technologies. A green window, akin to green banks, is an innovative tool designed to work with the private sector to mobilise capital in the sector. 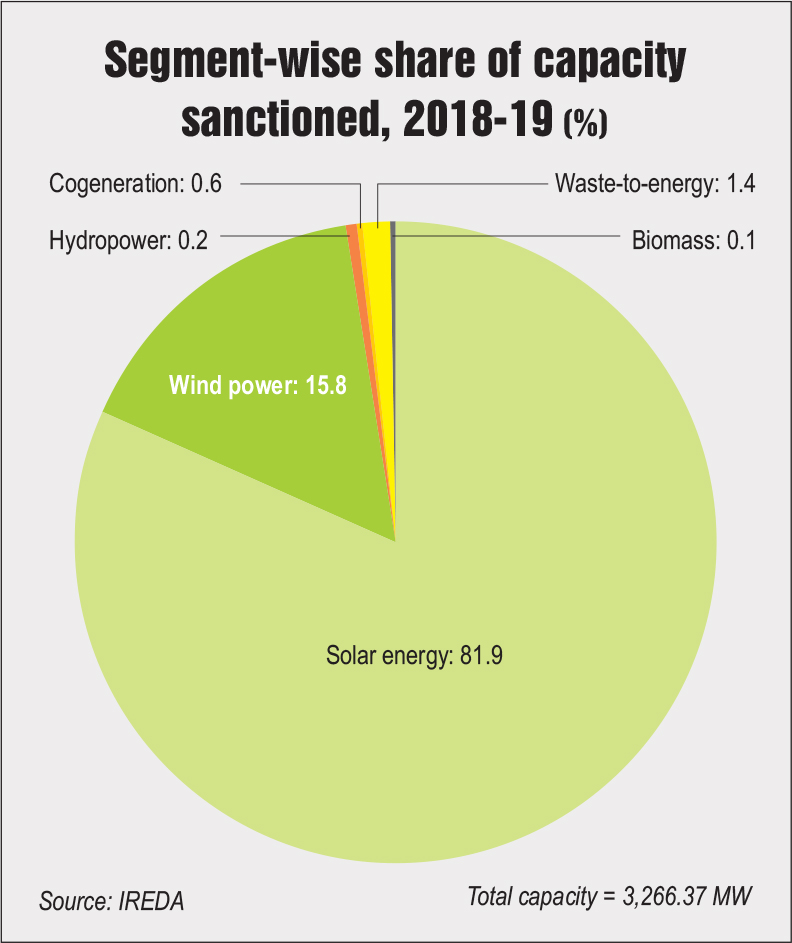 According to Shah, “Technology advancements led to a major disruption in the sector, with solar power tariffs falling from as high as Rs 17 per unit in the past to Rs 2.70 per unit at present. A similar trend has been witnessed in the wind power segment. This disruption is a cycle that impacts the equity end, original equipment manufacturers and bankers. Therefore, it is important for bankers to innovate and be agile enough to change the business model and appraisal methodology as per market requirements.”

A liquidity crunch, banks being placed under corrective action, and PPA reneging issues in states like Andhra Pradesh have dampened investor sentiment in the renewable energy sector. The poor performance of capital markets this year has also affected merger and acquisition (M&A) activity. Shah believes that a low tariff-environment may compel some investors to exit the market, bringing back the M&A trend in the sector over the next year. Further, the Indian market lacks instruments for bankers or NBFCs to offload their assets on to the bond market directly. Globally, this is done through instruments such as alternate investment funds (AIFs) and asset-based securities (ABSs). Going forward, bankers and NBFCs would work towards the creation of these instruments.

IREDA’s portfolio is likely to be dominated by solar over the next few years. Apart from financing renewable energy projects that are under bidding or are yet to be announced, IREDA is looking at new and emerging technologies such as hybrid power projects, floating solar, energy storage and electric vehicle infrastructure to expand its footprint in the green energy sector.

Given its vast experience in financing renewable energy projects, the agency is better placed to understand the dynamics of the sector and associated risks as compared to commercial bankers. IREDA believes that the country’s financial sector needs to become increasingly innovative and agile to move with the times. “One of the key goals of IREDA is to have its own AIFs and ABSs. We have set a tentative timeline for executing this by the middle of the next financial year, to set a trend for others in the market to follow,” says Shah.