After a long period of limited offtake, the renewable energy certificate (REC) market bounced back in 2019. The offtake has been especially noteworthy in the solar REC segment. During the period 2012-13 to 2017-18, the volume of solar RECs traded across the two exchanges, the Indian Energy Exchange (IEX) and Power Exchange of India Limited (PXIL), barely reached 0.5 million. In 2018-19 however, the total volume traded in this segment stood at 7.2 million, indicating a strong turnaround. In contrast, the volume of non-solar RECs cleared during the year stood at 5.2 million, nearly one-third of those sold in 2017-18.

The increase in the volume of RECs traded can be attributed to improved renewable purchase obligation (RPO) compliance as well as the decline in the floor and forbearance prices of RECs, which are revised by the Central Electricity Regulatory Commission (CERC) at regular intervals. In April 2017, the forbearance and floor price revision by the CERC resulted in a stay on the trading of solar RECs. Consequently, the floor price was removed. As a result, the weighted average clearing price fell from around Rs 3,500 per MWh for solar and Rs 1,500 per MWh for non-solar in 2017-18 to Rs 1,097 per MWh and Rs 1,293 per MWh, respectively, in 2018-19. While the average was low, it is important to note that the prices were as high as Rs 2,000 per REC in some months.

During calendar year 2019, the total solar and non-solar buy bids stood at around 22.5 million at the two power exchanges. The sell bids were nearly half at around 11.5 million. Meanwhile, the volume cleared at both the exchanges stood at about 8.2 million during 2019.

The REC market is cyclical and typically follows the financial year pattern. During January-December 2019, the peak in buy bids was seen in February 2019, in line with the end of the financial year pattern. During the month, 2.1 million RECs were bought, of which over 900,000 non-solar RECs were issued before April 1, 2017. The second peak was observed in October 2019, with 2 million RECs bought during the month about 1.6 million non – solar RECs and 400,000 solar RECs.

During the year, the largest volumes were cleared in the months of February and March . In February, over 1.2 million RECs were cleared, of which about 400,000 were in the solar segment and the rest in the non-solar segment. The volume cleared in March was only slightly lower at 1.17 million RECs, comprising over 300,000 solar and 850,000 non-solar RECs. Since the financial year closes in March, these two months typically witness high REC activity.

Throughout the year, the price of solar RECs at the IEX fluctuated from Rs 1,500 per REC (1 REC is equivalent to 1 MWh) to Rs 2,400 per REC. The bottom peak was observed in February, the month with the largest buy and sell bids of solar RECs. From February to July, the price increased to Rs 2,000 per REC. Since then, the price has seen an upward trend, and stood at Rs 2,400 per REC during October-December 2019. PXIL saw REC trading at prices similar to the IEX, with a few fluctuations. Meanwhile, the price of non-solar RECs remained between Rs 1,300 per REC and Rs 2,000 per REC at the IEX. The lowest price was seen in April 2019 while the highest peak was in December 2019. 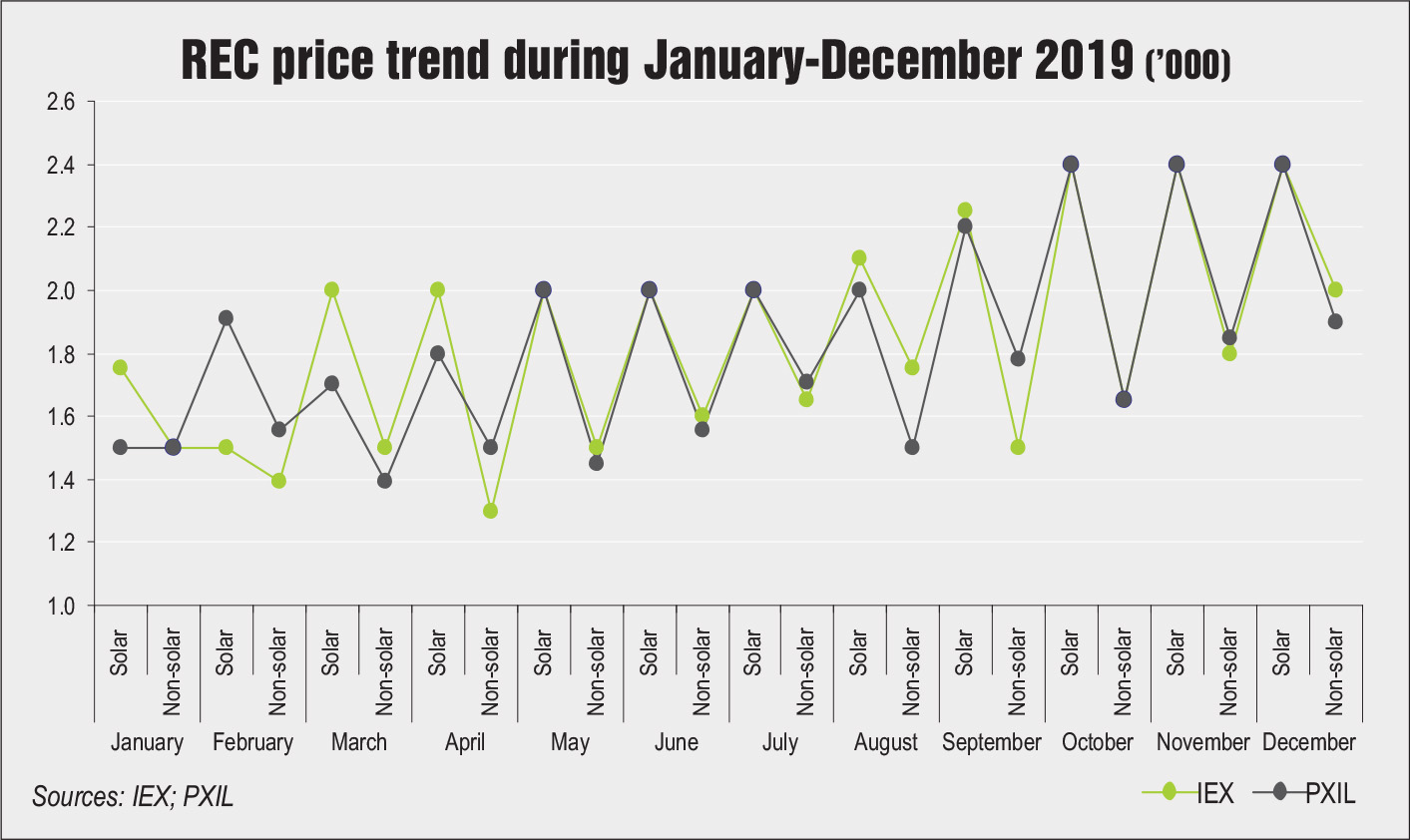 Consequent to the revision of the floor and forbearance price issued by the CERC in an order dated March 30, 2017, the Supreme Court had put a stay on the trading of RECs. While trading of non-solar RECs was allowed from July 2017 onwards, subject to certain conditions, trading of solar RECs was suspended till March 2018. The Appellate Tribunal for Electricity (APTEL) judgement, vide order dated April 12, 2018, resumed the trading of solar RECs. As the majority of the RECs had expired or were likely to expire soon, the CERC extended the validity of the RECs up to March 31, 2019. These developments resulted in a significant increase in the market clearing volume of solar RECs on both the power exchanges, from 0.21 million in 2017-18 to 7.2 million in 2018-19.

In May 2019, the validity of RECs issued before April 1, 2017 was extended to December 31, 2019 through an order issued by the CERC. During the six month period April to December 2019, 121,888 RECs were to expire. As per another order issued by the CERC on December 30, 2019, the CERC extended the validity of RECs issued before April 1, 2017 further, to March 31, 2020. According to the commission, the validity of 9,514 RECs that expired in November 2019 had to be extended. The commission also observed that the validity of 216,849 RECs due to expire between December 1, 2019 and March 31, 2020, also had to be extended. This comes as a significant relief for entities seeking to purchase RECs amid an apparent shortfall.

The REC market has adopted a cyclical pattern with trading peaks observed in February and March while trading in the rest of the months remains largely flat. The obligated entities have to meet their RPOs at the end of the financial year. Thus, there is an increase in the trading of RECs. This makes the market predictable as well as congested during the two months. It results in a steep decline in REC prices, thereby significantly reducing profit from the market.

With renewable energy-based captive power generation gaining popularity among commercial and industrial consumers, the entities are now able to fulfil their RPOs without the help of RECs. Further, discoms and other obligated consumers are now looking to purchase clean energy directly instead of burning coal-based power and then compensating it with RECs. Therefore, the REC market, which until recently was in a glut-like situation, is now approaching demand and supply parity. 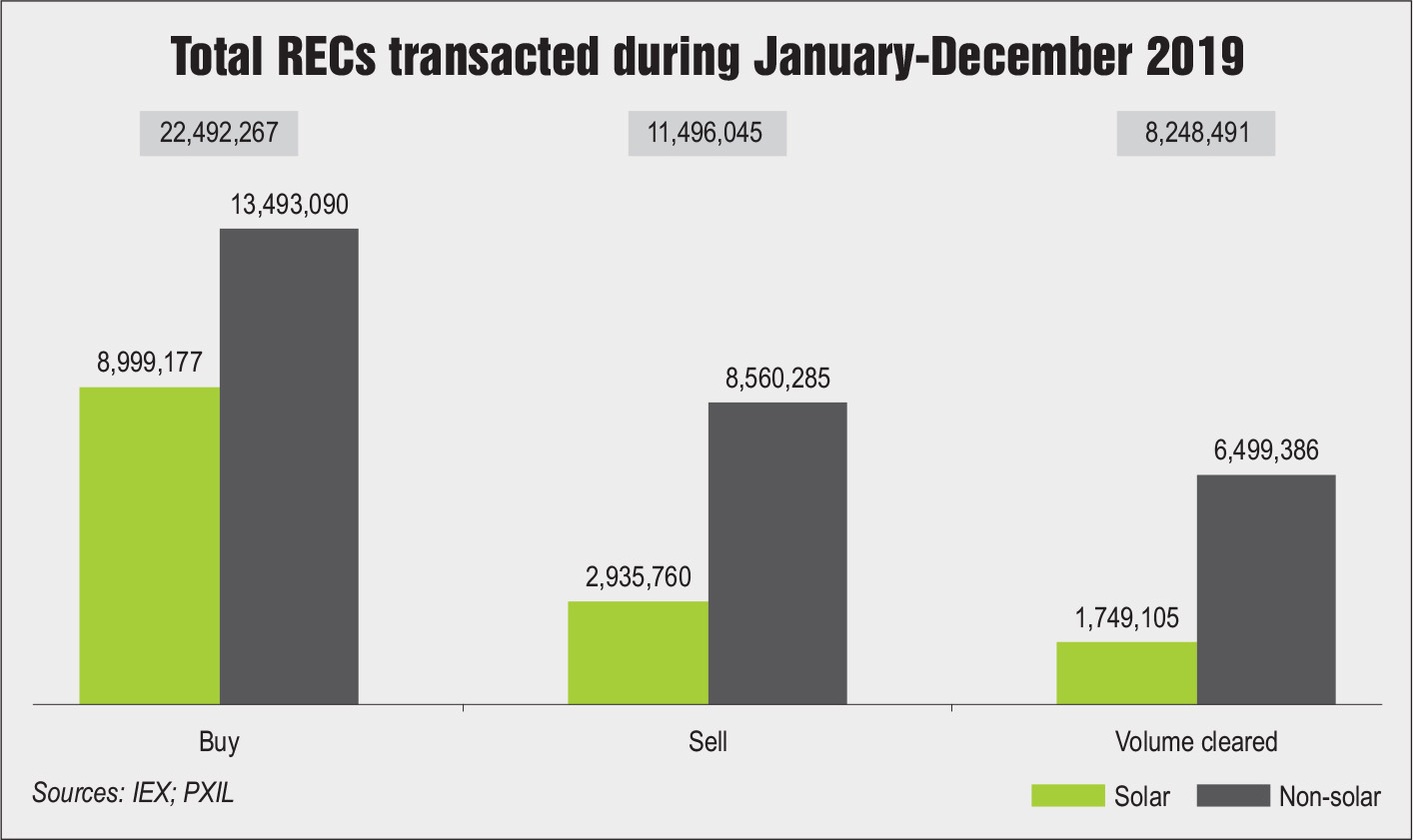 The year 2019 has been a positive year for the REC market as compared to the previous two years. However, the uncertainty associated with the REC mechanism is likely to continue. In fact, with the government’s focus on renewable energy capacity expansion to make clean energy affordable and accessible, the REC market may begin to shrink over the next few years. The prices discovered in the peak trading months may be lower as the supply may exceed the demand considerably. That said, the state of the REC market in 2020 may remain similar to that observed in 2019. Trading activity may vary across months, but the overall outcome may not change much.