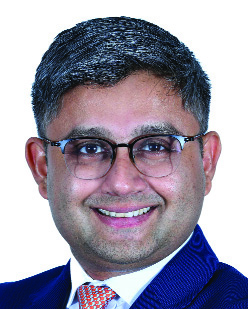 Harsh Shah is CEO and whole-time director, IndiGrid, an infrastructure investment trust (InvIT) established to own inter-state power transmission assets in India. He was closely involved in setting up the trust, from concept to its current position as a $1.5 billion listed platform. Shah is also a member of the SEBI Advisory Committee for InvITs and real estate investment trusts (REITs). Moreover, he is a member of the financial markets committee at CII and leads the working group on InvITs and REITs of the CII National Committee on Financial Markets. Previously, Shah served as chief financial officer at Sterlite Power, prior to which, he worked with Larsen & Toubro, L&T Infrastructure Finance Company Limited and Procter & Gamble International Operations Pte Limited.

According to Shah, investments in the alternative energy space have increased substantially in recent years. “India’s renewable energy sector attracted investments of over $42 billion over the past four years and is currently at an inflection point, while witnessing significant consolidation, the pace of which is likely to increase in the near future.” He also believes that the timing is right for aggregating assets in this sector, given that the existing players may be monetising in light of the constrained capital market environment. “InvITs can offer a great way to monetise the operating renewable energy portfolio of assets, which will enable the existing developers to plough back capital to bid for new projects or de-lever. Monetisation may also be beneficial to developers as InvITs do carry an advantage with respect to cost of capital and tax benefits,” Shah adds. He believes that the outlook for InvITs is positive, although some issues still need to be addressed. “The regulators are yet to enable insurance and pension funds to invest in the debt securities of InvITs, which will allow better asset and liability management and offer a credible alternative to these investors.”

The power sector is going through a major transformation, he notes. “From the goal of being a power-surplus country, the spotlight is now on green energy and power for all. This entails heavy investment in renewables and transmission,” he says. According to him, an investment potential of Rs 4.2 trillion is envisaged in the transmission segment over the next five years. Of this, the opportunity in transmission systems connected to renewable projects is Rs 420 billion over the next few years. “This will require fresh capital investment and recycling of invested capital for greenfield development. The new phase of growth calls for new solutions. In this capital-intensive sector, innovative funding models along with increased transparency are the need of the hour,” says Shah.