Solar-based power generation has emerged as a viable option in the captive power space over the past five years owing to rapidly falling capital costs. Even though coal-based captive power plants (CPPs) continue to occupy the largest share in the tracked capacity, their share declined from 56 per cent to 52 per cent between 2014-15 and 2018-19, according to Renewable Watch Research. Meanwhile, the share of solar power-based captives increased from almost nothing to 2 per cent in 2018-19. Solar rooftop power plants, in particular, have emerged as key captive power sources for institutional users. Wind power captives, on the other hand, have been there for over three decades now. A key outcome of the increased share of renewable energy-based CPPs is the fall in diesel or liquid fuel-based captive plants from 5 per cent in 2014-15 to 3 per cent in 2018-19.

Renewable Watch Research has tracked about 14,206 MW of captive renewable energy capacity. Of this capacity, 42 per cent  was accounted for by bagasse-based plants, followed by wind with 38 per cent share, solar with 12 per cent, biomass/biogas with 7 per cent and hydro with 1 per cent. Over the past five years, notable changes have taken place in the source-wise mix of renewable energy-based captives, with solar energy’s share in the tracked capacity increasing from 2 per cent in 2014-15 to 12 per cent in 2018-19. Meanwhile, wind energy-based captives have increased their share from 32 per cent to 38 per cent during this period. This can be primarily attributed to a decline in capital costs, especially of solar energy projects, and favourable policy and regulatory framework for promoting solar, including rooftop technology. Further, renewable energy-based CPPs help industries meet their renewable purchase obligations (RPOs), which are a key driver for their growing adoption in the commercial and industrial segment.

The sugar industry accounts for the highest share, 42 per cent of the total tracked renewable capacity mainly due to bagasse, a by-product of sugar manufacturing, which is used for power generation. Miscellaneous industries including agro-processing, dairy products, electronics, pharma and food products follow next with a 15 per cent share, and textiles with a 10 per cent share in the total tracked capacity. Group captive has also emerged as a key application area for solar- and wind-based projects, with 191 MW and 799 MW respectively.

Among states, Tamil Nadu leads the pack with around 3.5 GW or 24 per cent of the renewable energy-based capacity, followed by Karnataka with 2.5 GW or 17.3 per cent capacity. Given that Tamil Nadu has a large number of sugar mills, bagasse dominates as the most favoured fuel followed by wind power. Other key states with significant renewables-based captive capacity include Uttar Pradesh at about 2 GW or 14.4 per cent, Maharashtra with 1.8 GW or 12.4 per cent and Gujarat with around 1.1 GW or 7.5 per cent. Solar-based CPPs are the most common in Karnataka, Rajasthan and Tamil Nadu, accounting for 51 per cent of the tracked solar capacity. Meanwhile, biomass-based CPPs are most abundant in Tamil Nadu (247 MW) and Punjab (162 MW), both being states with significant crop residue, rice husk and straw that can be used as fuel for such CPPs. 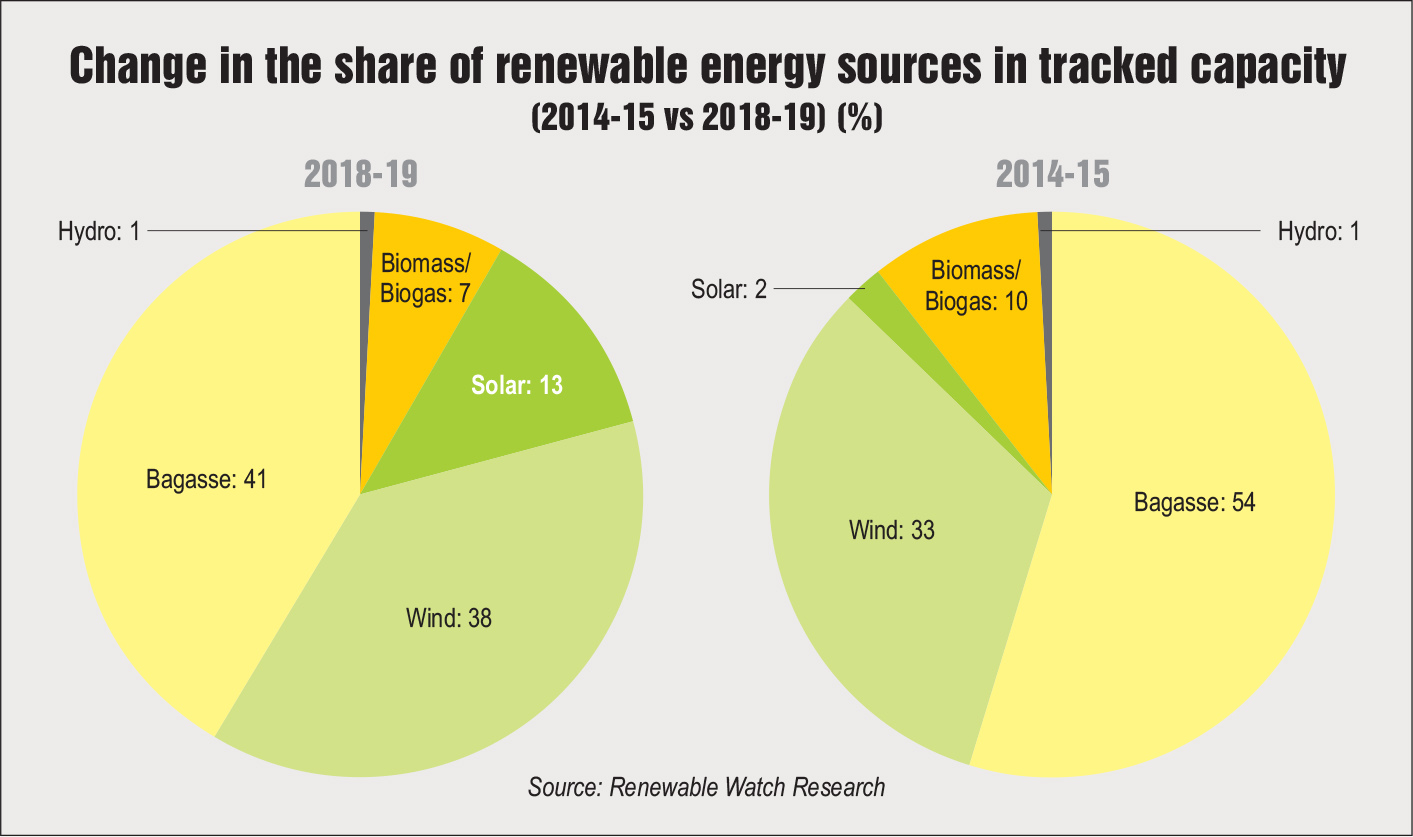 RPO is one of the biggest drivers of adoption of renewable energy-based CPPs by commercial and industrial establishments. Under Section 86(1)(e) of the Electricity Act, 2003 and the National Tariff Policy 2006, RPO is a mechanism by which the obligated entities are required to purchase certain percentage of electricity from renewable energy sources, as a percentage of the total consumption of electricity. However, the applicability of RPOs to captive power generators was ambiguous until the Supreme Court judgement in May 2015 clarified the status. The case between Hindustan Zinc Limited and the Rajasthan Electricity Regulatory Commission was instrumental in putting to rest issues regarding applicability of RPO to captive power consumers. The judgement justified the applicability of RPO to captive consumers and interpreted it in the context of Article 51A (g) of the Indian Constitution, which makes it a fundamental duty of the citizens to protect and improve the natural environment.

In February 2019, a clarification was notified by the MoP regarding capping of RPO for CPPs. It was clarified that the RPO of CPPs may be pegged at the RPO level applicable in the year in which the CPP was commissioned. For any capacity addition in the CPP, additional RPO as obligated in the year in which the capacity is commissioned will be applicable.

In October 2019, the MoP further clarified that for CPPs commissioned before April 1, 2016, the RPO should be at levels as mandated by the appropriate commission for the year 2015-16. For CPPs commissioned from April 1, 2016 onwards, the RPO levels as mandated by the appropriate commission or the MoP, whichever is higher, for the year of commissioning of the CPP will be applicable. In case the CPP has surplus power over its consumption for meeting the RPO obligation, such a CPP may sell its surplus power to discoms under the prevailing arrangements or in the power exchange. 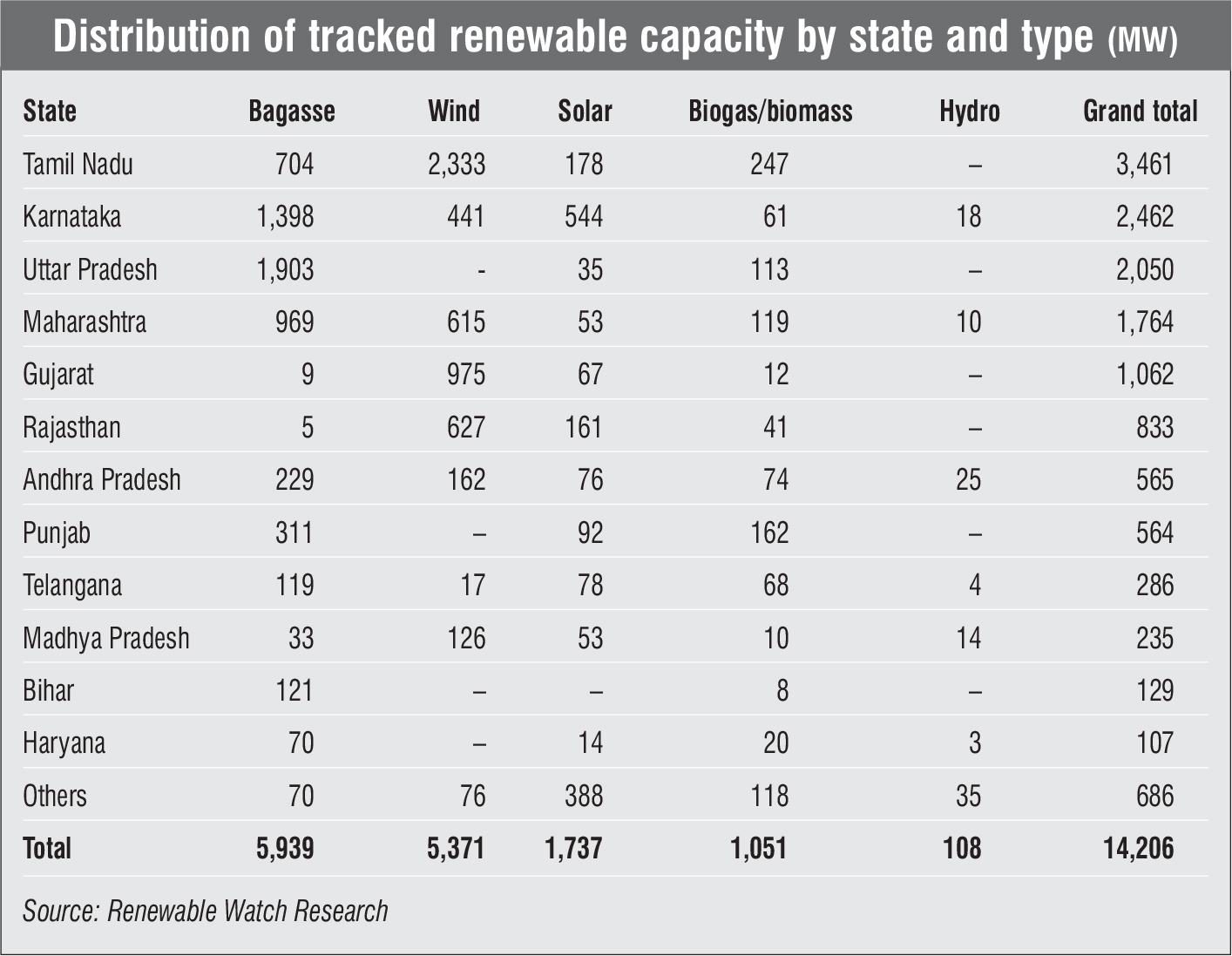 According to Renewable Watch Research, over 70 captive power projects based on renewable energy are currently at various stages of development, aggregating to 1,160 MW. Notably, the majority of these projects, accounting for 48 per cent of the tracked upcoming renewable energy captive capacity are solar-based, indicating a clear shift of industries preferring solar to other alternative technologies. Bagasse and wind follow next with a share of 17 per cent each and the rest is accounted for by biomass and hydro. In terms of status, 67 per cent of these projects or about 780 MW of the upcoming capacity is in the announced stage and is yet to be finalised. The rest of the capacity or about 380 MW is under implementation and is likely to be commissioned in the next one to two years.

The trend of upcoming capacity among states is also expected to undergo a significant change. Odisha and Karnataka have emerged as key states in the upcoming tracked renewable energy-based captive capacity. Together, these states account for 38 per cent of the upcoming capacity. Maharashtra also has a good renewable captive capacity line-up with 198 MW, followed by Uttar Pradesh (84 MW) and Chhattisgarh (83 MW). The remaining capacity is scattered across different states.

However, the adoption of intermittent solar and wind power may not pace up in the industrial captive segment that requires round-the-clock quality power unless energy storage becomes commercially viable. Supportive government policies for renewable energy and mandates on bulk consumers to meet their RPO targets will further drive the installation of renewable CPPs. Advancement in digital technologies will lead to reduced operating costs and is expected to make renewable-based CPPs attractive for consumers in the near future.