India will need a significant amount of funds to achieve the 175 GW renewable energy target by 2022. According to the Climate Policy Initiative, about $190 billion will be required to achieve this target. Some concerns have been voiced about a possible funds shortfall – of the order of about $53 billion – in light of the decline in debt deals, including external commercial borrowings (ECBs), over the past year. That said, the financing outlook is not entirely unpromising. The year witnessed a series of mergers and acquisitions. Green bonds emerged as an attractive alternative for developers and some initial public offerings (IPO) materialised finally, though the response to these was not phenomenal. Renewable Watch analyses the key financing deals during the period November 2018 to October 2019 to assess the state of the market and its future outlook…

Many business groups that had entered the solar segment in the past few years are now looking to sell their solar portfolios. A recent deal between Essel Infraprojects Limited and Adani Green Energy Limited (AGEL) points to this growing trend of selling solar assets to create liquidity. The Essel Group entered into an all-cash deal with AGEL to sell 205 MW of its operational solar power assets in Punjab, Karnataka and Uttar Pradesh worth Rs 13 billion. Similarly, Suzlon made significant efforts to exit the solar segment. It sold its remaining 51 per cent stake in its special purpose vehicle (SPV), Tornado Solar Farms Private Limited, to CLP India Private Limited for Rs 165.7 million, as well as in Amun Solarfarms Limited and Avighna Solarfarms Limited to Canadian Solar for Rs 281.1 million. It also sold a 51 per cent stake in its SPV Rudra Solarfarms to AMP Solar for $2 million. In Shreyas Solarfarms Limited and Aalok Solarfarms Limited, it sold 100 per cent stake to ReNew Power for Rs 198.4 million and Rs 99.3 million respectively.

Dutch oil and gas major Royal Dutch Shell was on a buying spree through the year. It ended 2018 by buying a 49 per cent stake in Cleantech Solar for $100 million. In 2019, it acquired approximately 20 per cent stake in Orb Energy and invested $3 million in Punjab Renewable Energy Systems Private Limited, a biomass supply chain company. The highlight of the year was Petronas’s acquisition of Amplus Solar from I Squared Capital. Other important developments were an investment of over Rs 23 billion in Ayana Renewable Power Private Limited by the National Investment and Infrastructure Fund and Eversource Capital and a capital infusion of Rs 7.32 billion in Azure Power Global Limited by CDPQ. 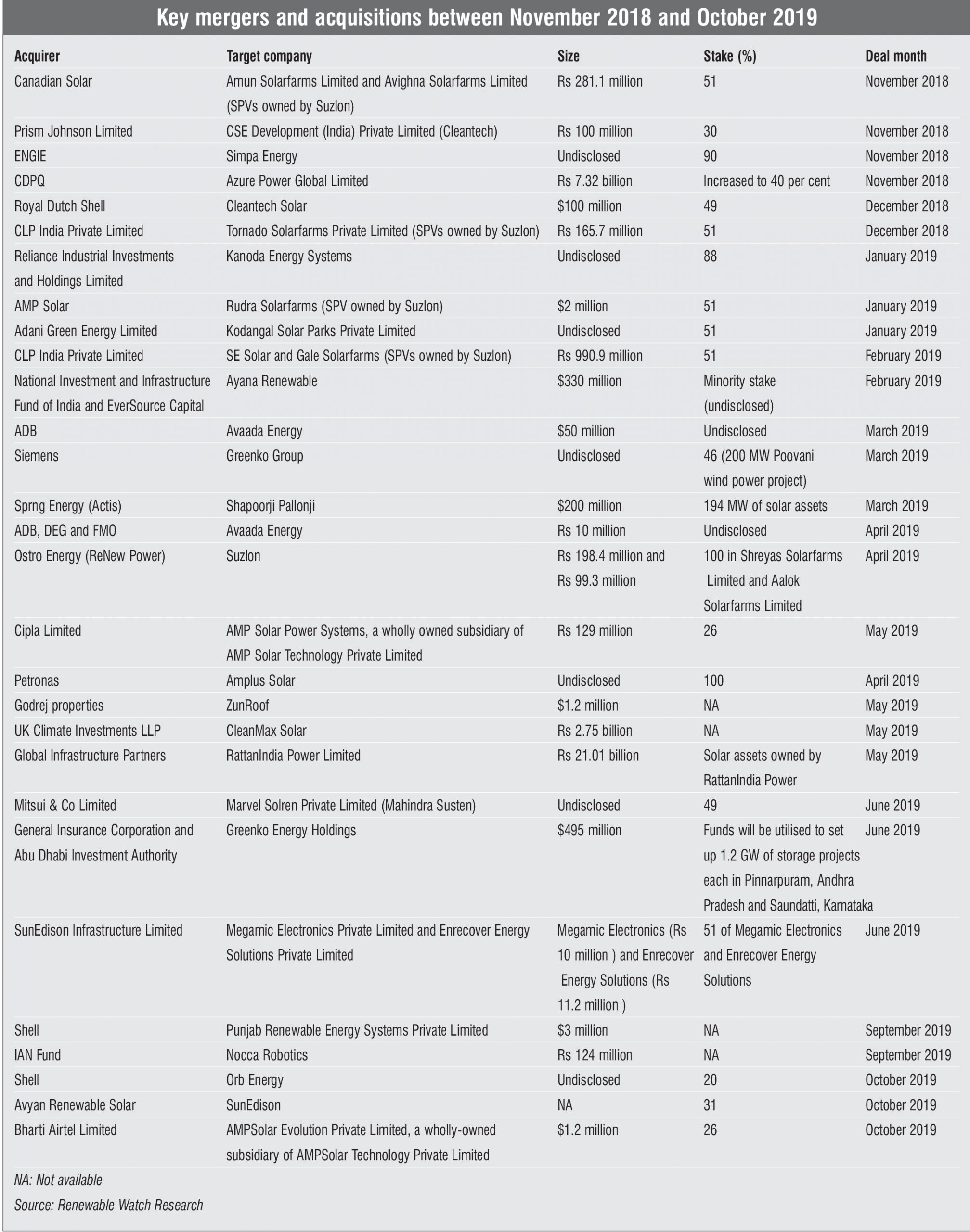 During the period under review, 10 domestic and ECB deals worth around Rs 95.3 billion were undertaken. In July 2019, Srei Equipment Finance Limited, a wholly owned subsidiary of Srei Infrastructure Finance Limited, received a credit approval of $30 million from the Dutch development bank FMO. In May 2019, Clean Solar Power, a subsidiary of Hero Future Energies Global Limited, received debt financing of up to $43.3 million from the International Finance Corporation for the development, construction, and operations and maintenance (O&M) of a 250 MW greenfield solar project in Bhadla, Rajasthan. CleanMax IPP, a subsidiary of CleanMax Solar, received a loan of Rs 1.58 billion from PTC India Financial Services to refinance loans taken from KKR Financial Services for the development of a 32 MW solar project in Bellary. ReNew Power Limited continued to raise finance and took a loan of about Rs 24,914.93 million from the Overseas Private Investment Corporation for the construction of new wind and solar power projects.

In the rooftop solar space, the National Bank for Agriculture and Rural Development signed an agreement worth Rs 7,130 million with the Green Climate Fund to support private companies in the development of rooftop solar systems across India. In November 2018, the central government and the Asian Development Bank (ADB) signed a loan agreement to support lending by India Infrastructure Finance Company Limited (IIFCL). The funds will be used for developing various projects, including renewable energy projects. Another loan of Rs 7.35 billion was given for the Himachal Pradesh Clean Energy Transmission Investment Programme, for the development and expansion of the transmission network to evacuate hydropower from the state. 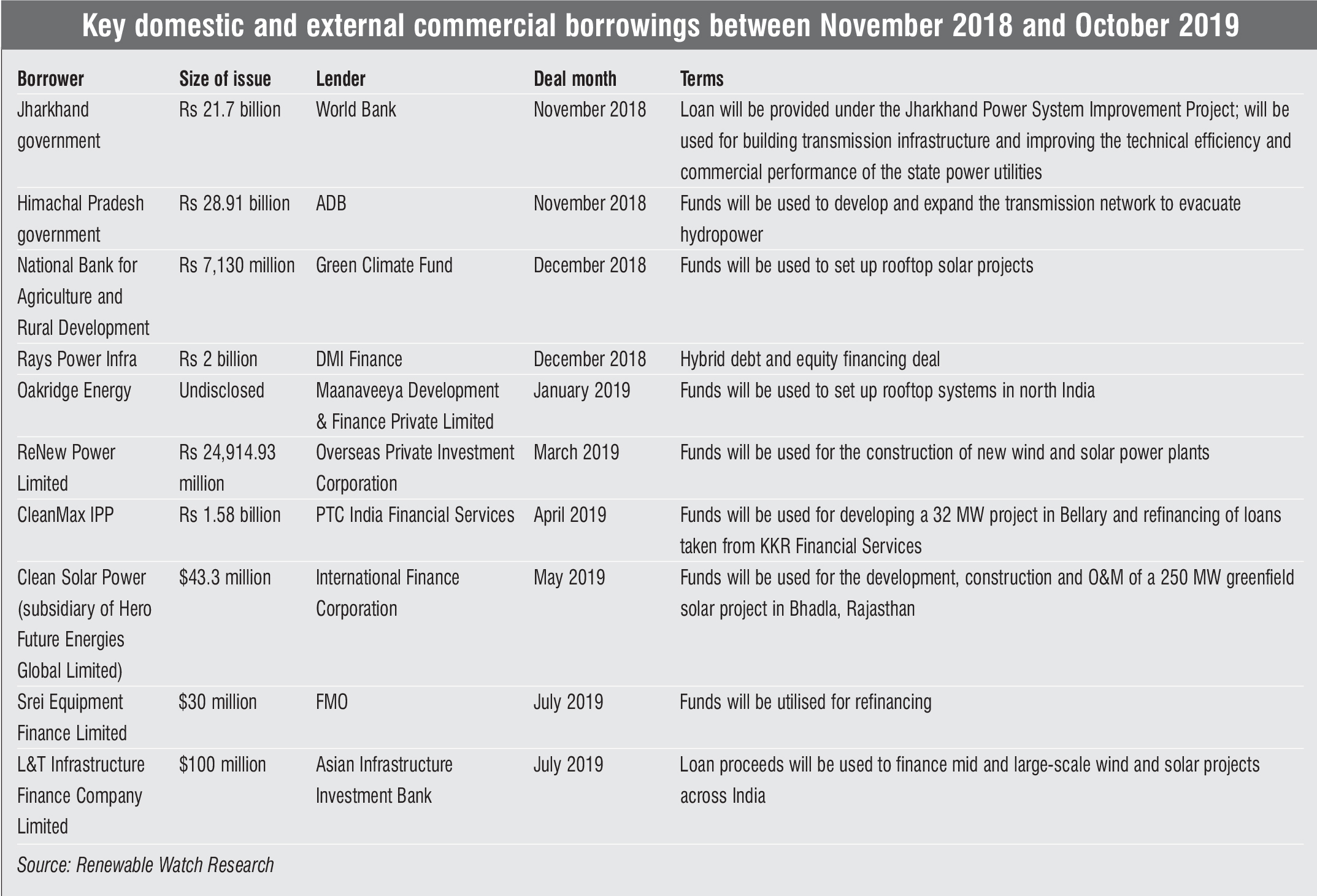 After some delay, Ahmedabad-based solar engineering, procurement, construction and advisory company Gensol Engineering Limited finally decided to go ahead with its IPO in September 2019 to fund its growing O&M expenses and global expansion plans. The IPO was oversubscribed and listed at a premium on the bourses. The promoters planned to raise Rs 170 million-Rs 180 million from the market by offering up to 2,160,000 shares with a face value of Rs 10 and a price band of Rs 81-Rs 83. Prior to Gensol’s IPO, Sterling & Wilson Solar Limited, the solar engineering and construction arm of the Shapoorji Pallonji Group, launched its IPO. However, its IPO was undersubscribed. The IPO comprised the sale of 40.06 million shares. This included an offer for the sale of shares worth Rs 20.83 billion from Shapoorji Pallonji and Company Private Limited and Rs 10.41 billion from the company’s chairman, Khurshed Yazdi Daruvala.

Between November 2018 and October 2019, four green bonds worth about $1.5 billion were released, while two green bonds worth $850 million were at the planning stage. Most recently, in October 2019, AGEL announced plans to issue dollar-denominated green bonds amounting to $362.5 million. The proceeds of the issue are to be used to repay the foreign currency loans and rupee borrowings of the company’s subsidiaries. Earlier, in March 2019, ReNew Power Limited concluded a green bond issue of $375 million, which is to be used for refinancing outstanding ECBs and for capital expenditure for renewable energy projects. The issue offered a yield of 6.67 per cent per annum. Tata Cleantech Capital Limited too raised $25 million through green bonds from Dutch development finance company FMO, in January 2019.

During the year, Azure Power Solar Energy Private Limited, a wholly owned subsidiary of Azure Power Global Limited, planned to issue a green bond offering of $350 million, with an expected US dollar coupon of 5.65 per cent. Azure Power is expected to use the proceeds to refinance its existing debt. And Urja Global Limited received approval in its annual general meeting to issue green bonds of up to $500 million to finance its renewable energy projects and expand its electric vehicle business.

The renewable energy sector has its own set of risks and challenges that financiers have to take into account. The recent fall in solar and wind power tariffs has left investors with single-digit returns from projects. Both the solar and wind segments are dealing with land acquisition challenges, and the must-run status of renewable energy projects has often been questioned. A recent order issued in Karnataka to stop procuring solar power as its discoms had met their renewable purchase obligations has diluted investor interest in the segment.

Transmission constraints continue to impact project development while payment delays by cash-strapped discoms are elevating the risk profile of projects for financiers. Moreover, the PPA renegotiation crisis in Andhra Pradesh has added to investor concerns. These issues notwithstanding, there has been a considerable increase in private equity deals, which indicates the growth opportunities that exist for developers and investors alike. Over the next year, the investment opportunities in renewables are likely to grow for investors as a number of renewable energy players are exploring the possibility of diversifying into new segments such as e-mobility and battery storage, and start ups with sustainable business models are entering the waste-to-energy segment.

The improvement in the exit environment is another positive for the segment. In the past year, several assets have been sold. With more foreign capital coming in, other such assets could be changing hands in the near future. Another exit option for private investors has been IPOs. The listing of renewable energy companies on the bourses during the past year is a welcome sign, considering that many companies have in the past withdrawn or postponed their IPO proposals. A high interest rate, which makes debt servicing difficult, has been the key reason for the reduction in debt deals. The willingness of developers to raise money through green bonds has been another factor. European countries, which are currently flush with money, find it attractive to earn 4-5 per cent through green bonds issued by Indian developers rather than invest in their own countries at sub-2 per cent interest rates.

Going forward, the renewable energy sector is likely to witness two key trends. The first is a greater uptake of innovative financing tools such as infrastructure investment trusts (InvITs). The industry is already moving in this direction with Piramal Enterprises and the Canada Pension Plan Investment Board planning to set up the country’s first renewable energy-focused InvIT, with an initial corpus of $600 million. The second likely trend is a greater interest among private equity investors to fund Indian renewable projects, driven by the churn taking place in this market.