After a period of strong growth, the solar segment seems to be slowing down now. Key indicators over the past few months suggest that all may not be well with the sunshine segment. Solar power, which had experienced a twelve-fold growth in capacity to reach 31 GW over the past five years, is now struggling to meet its annual target.

In fact, the year 2018-19 saw questions being raised about India’s ability to achieve the 100 GW solar milestone by 2022. This was a time when a spate of issues related to tariff caps, land acquisition and import duty on solar cells and modules had started slowing down the pace of capacity addition in the segment. Of the 11 GW target set for 2018-19, only 6.5 GW (59 per cent) was achieved.

Recognising the challenges faced by developers, the government revised the target for 2019-20 down to 8.5 GW. However, it now appears that the segment could miss its target yet again. Issues such as delays in payments by utilities, Andhra Pradesh’s decision to renegotiate solar and wind power purchase agreements (PPAs), and a liquidity crunch caused by problems in the overall power sector have plunged the clean energy industry into its worst crisis in recent years. The solar segment added merely 2,921 MW of capacity (2,479 MW ground mounted and 442 MW rooftop) during the April-September 2019 period. This half-year capacity addition comprises only 34 per cent of the target set for 2019-20.

Contract enforcement is a critical component of the World Bank’s ease of doing business ranking methodology. In this context, sovereign bodies including state electricity utilities (in Andhra Pradesh and Uttar Pradesh for instance) reneging on contracts in 2019 does not bode well for the Indian renewables sector. Not only has this led to diminishing investor confidence but it could also impact foreign direct investment flows, which is key to meeting the 2022 renewable energy targets.

Fortunately, central ministries and government institutions such as quasi-judicial and judicial forums like state electricity regulatory commissions and the Appellate Tribunal for Electricity have always upheld the true interpretation of contracts and statute. For instance, when the Andhra Pradesh government announced its intention of revisiting the already signed PPAs, the Ministry of New and Renewable Energy stepped in to clarify that no PPA could be revisited unless there was a clause in the agreement to do so or a case of malafide corruption is proved beyond doubt. This counteracted some of the damage done and restored investor confidence in the sector. However, soon thereafter, Uttar Pradesh started curtailing the purchase of green power from projects that it felt had high tariffs.

Payment delays and defaults have been on the rise of late. As per the CEA data, discom dues to renewable players stood at Rs 97 billion as of July 31, 2019 with almost 67 per cent of it being contributed by utilities of Andhra Pradesh, Tamil Nadu and Telangana. Such payment delays along with uncertainty over the resolution of tariff issues for projects and instances of grid curtailment have adversely affected the credit profile of wind and solar power projects having PPAs with these state discoms.

Even if power distribution companies pay up, there is a bigger challenge of tariff caps being imposed by tendering agencies. Central and state agencies are known to have cancelled bids in the event of companies quoting tariffs higher than the ceiling set by them. As per industry reports, cancelled renewable energy projects were a tenth of all tendered projects in 2018-19, compared with 2 per cent in the previous year. The proportion of cancelled projects is expected to rise even further during 2019-20.

All these have become recurring issues that call for immediate attention. Industry experts believe that instead of budget-based announcements, monetary and fiscal benefits for the solar industry should have predefined sunset dates with multi-year time frames; policy benefits by the states should have consistency and should remain effective for the useful life of a project. Regulatory inconsistency must be contained and there should be a single-window clearance system for the installation of solar projects with predefined timelines and specified responsibilities. Besides, the enforcement of RPOs should be ensured as part of regulations by state electricity regulatory commissions to keep discoms in check.

As indicated earlier, the overall tendering of solar photovoltaic projects has slowed down in recent months. According to a recent ICRA report, the overall solar capacity tendered during the period January-September 2019, at about 7 GW, was 28 per cent lower as compared to the corresponding period in 2018.

Not only has project allocation slowed down but both undersubscription and cancellation of awarded tenders have also increased. Central tendering agencies have reportedly cancelled over 4.5 GW of renewables capacity after deciding that the resulting electricity tariffs were too high with state distribution companies cancelling a further 100 MW. For instance, the Solar Energy Corporation of India terminated its 2.4 GW interstate transmission system Tranche II solar scheme as the resulting Rs 2.64 per kWh solar power tariff was higher than expected.

The industry has also been affected by execution delays on account of land acquisition and transmission connectivity approvals. In fact, in the solar power segment, this is one of the major criticisms levelled against the government that it rushes to auction projects in solar parks even before completing land acquisition formalities, let alone infrastructure development. This has led to major issues for investors and project developers, who end up winning bids but then find that the infrastructure is not ready for them to start construction. In the Pavagada, Charanka, Bhadla and Kadapa solar parks, bid submission deadlines for tenders have reportedly been extended repeatedly.

Another major hurdle that needs to be crossed is inadequate availability of transmission infrastructure. There is a mismatch in the construction timelines between transmission and solar capacity addition. While solar plants have a very short gestation period, transmission projects take much longer. Further, transmission planning can start only after solar power bids have closed in order to get an idea about the location of the new capacity.

Due to these on-ground developmental delays, achieving financial closure of projects in a timely manner remains a challenge for many IPPs.

A holistic policy on land utilisation should, therefore, be developed by each state government to balance the land requirements of different sectors in the most prudent and ecologically friendly manner. There is a need to expedite the computerisation of land records and prioritise the use of wasteland, among other steps. Land-neutral technologies such as floatovoltaics and rooftop solar also need to be promoted, along with land efficient technologies such as solar-wind hybrids. In order to minimise renewable energy grid integration delays, transmission system development needs to match the growing demand.

All the aforementioned issues and challenges have had an adverse impact on funds flowing into the solar power space. While corporate funding in the global solar market witnessed a 34 per cent year-on-year increase, it was $9 billion in the first nine months of 2019 as against $6.7 billion during the same period in 2018, investments in the Indian solar power segment witnessed a slowdown. Large investments are drying up with no Indian deal figuring in the top transactions during the year. In 2018, investments in the solar segment stood at $9.8 billion, a decline of 15 per cent compared to $11.5 billion in 2017, owing to issues such as GST, the imposition of safeguard duty on solar cells and modules from China and Malaysia, and the delay in solar auctions. Concerns over the slowdown in project tendering, raising capital and meeting project timelines, as well as the fact that state utilities are demanding the reworking of PPAs have further affected investor confidence in 2019. In the third quarter of 2019, Shapoorji Pallonji-backed Sterling & Wilson Solar, a provider of solar EPC solutions, announced its initial public offering (IPO) to raise about $406 million. The IPO went undersubscribed. Major deals in the Indian renewables sector have also dried up this year, except for acquisitions. For example, Adani Green Energy acquired  the Essel Group’s 205 MW solar assets worth over Rs 12 billion.

India currently does not manufacture solar panels and largely depends on Chinese imports to meet demand. It sought to reverse this trend by inviting bids to set up manufacturing facilities for solar equipment in May 2018. However, no bids were received and the industry attributed it to a clause that requires manufacturers to build solar parks with a power generation capacity of 1.5 GW. Since May 2018, the bid submission deadline has been extended several times and the last time it was extended to October 31, 2019. The tender in its current form requires developers to set up four projects for module, cell, ingot and wafer manufacturing with an annual capacity of 500 MW each. However, as per industry sources, the tender is far from being concluded. 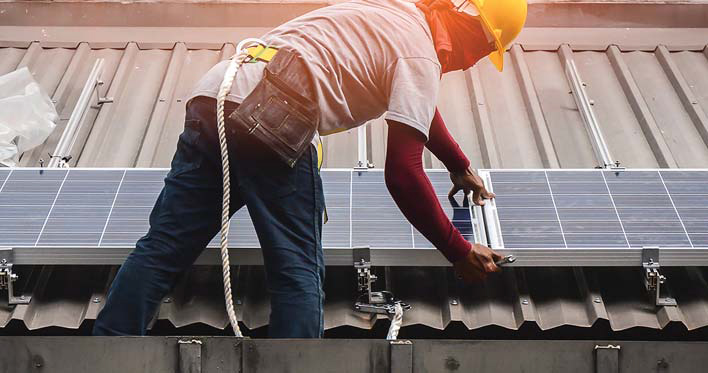 With less than 30 months left to achieve the 100 GW target, India must add around 70 GW at an extremely aggressive monthly average of 2.3 GW. And, in order to fulfil this, it is essential that policy instruments evolve suitably. Getting solar power capacity to cross 25 GW in less than 10 years through private investments, and bringing down tariffs from over Rs 10 per unit to less than Rs 3 per unit has been possible due to the initial programme design, which envisaged inviting tariff-based bids for supplying solar power through the grid to discoms. By awarding contracts to multiple private developers over the years, a competitive industry structure has been created. India has also taken advantage of the global decline in the price of solar panels, as Chinese equipment makers reduced their cost of manufacturing dramatically. However, as the rupee depreciates, or these China-based suppliers increase prices, the tariff discovered through bidding would also rise. Accepting higher tariffs is not easy, in the Indian context, in public procurement. But, not accepting them in a transparent competitive bidding process would only slow down, or even stall, the solar energy programme. Policymakers have to work towards overcoming this barrier in order to aggressively move forward in capacity addition.

On the technology front, PERC (passivated emitter rear contract)-equipped monocrystalline cells have emerged as the most popular technology in 2019. Bifacial modules are predicted to be the next big thing in the solar technology space in 2020, as these offer much higher efficiencies at a proportionately lower price increase. These are largely manufactured by China-based solar equipment companies. However, India’s growing import dependence on these foreign manufacturers indicates that the time has now come to take up manufacturing of solar panels, with full value addition. Getting investments into solar panel manufacturing needs investor confidence regarding sales and profits. It will take about two years to set up a plant and begin manufacturing after land with infrastructure is in possession. The issue of the imposition of safeguard duties can be examined after there is a manufacturing base in India, backed by a competitive industry structure. Safeguard duties, at present, would be of little help. Such a comprehensive holistic approach will help create a globally competitive manufacturing industry without subsidy support from the government. Otherwise, the present import dependence will continue.

To sum up, the solar segment holds a promising future considering the competitive advantage it has attained vis-à-vis all other sources of energy. The main hurdle in its growth story today is the fact that discoms expect developers to quote lower bids, despite growing project implementation challenges. The reverse auction system in the solar segment was designed to award projects to the lowest bidder. But what the industry now has is a reverse auction where upper tariff ceilings are set and bids are expected to go in one direction only – down. Government agencies need to collaborate with developers and investors and find the right balance among tariff, project quality and returns. If this fails, it will be challenging for the country to meet its 100 GW target.