On March 7, 2019, the Cabinet Committee on Economic Affairs (CCEA) approved the inclusion of hydro-based power generation in the renewable energy category given the segment’s potential to meet the country’s electricity demands sustainably. This move is expected to help in the development of regions located in the higher Himalayas and the Northeast, which account for the majority of the hydropower potential in the country. Further, hydropower projects will help stabilise the grid as India looks to increase the share of variable renewable energy sources (solar and wind power) to meet its growing power demand. The industry welcomed the move, particularly the provision that made the offtake of hydropower mandatory under hydro purchase obligations (HPOs), which will be a part of the non-solar renewable purchase obligations (RPOs). However, even eight months after the approval, the government has not introduced a formal hydropower policy defining the targets, solutions and growth trajectory for the segment. Meanwhile, the segment continues to face challenges and stressed assets remain a sore point.

Renewable Watch presents the current capacity status, key developments over the past year and the future outlook for the hydropower segment…

Capacity growth in the hydropower segment has slowed down considerably owing to two primary reasons. First, the rapid decline in the procurement cost of renewables (solar and wind) has increased their popularity vis-à-vis more expensive technologies such as hydro. This has led to a liquidity crunch in an already stressed market, resulting in stalled projects. Second, the sector had been grappling with policy paralysis since 2016 as the government mulled over the inclusion of hydropower in the renewable energy sector. Even after the proposal received cabinet approval in March 2019, there has been little policy-based respite. The year 2018-19 proved to be one of the worst years in the past five-year period, with only 106 MW of capacity added as compared to 815 MW in the previous year. During the period between 2014-15 and 2018-19, the installed capacity in the hydropower segment grew at a low compound annual growth rate of 2.4 per cent. Further, no new capacity has been added in 2019-20 so far. As of September 2019, the total installed hydropower capacity stood at 45,399 MW.

The generation from hydropower plants improved marginally in 2018-19. As opposed to a target of 130,000 GWh, the segment generated 135,039 GWh of electricity, exceeding its target for the first time after 2014-15. This is because the Central Electricity Authority (CEA) lowered the target for 2018-19 in view of the non-achievement trend in the past three years.

Meanwhile, the share of hydropower in the country’s power generation mix declined from 12 per cent in 2014-15 to 10 per cent in 2018-19, mainly on account of the increase in renewable energy generation.

Growth in the small-hydro power (SHP) segment remained sluggish. While the government remains fairly optimistic about the segment, there has not been any substantial increase in the installed capacity. The industry remains underdeveloped with an installed base of only 4,610.8 MW as of September 2019, against an estimated potential of 20,000 MW across 6,474 sites. The total generation from SHP plants in 2018-19 stood at 8,236.36 MUs, up from 7,314.73 MUs recorded in 2017-18.

The Ministry of New and Renewable Energy (MNRE) has set a target of 5,000 MW of cumulative installed capacity by 2022 for the SHP segment. However, given the challenges plaguing the segment, the addition of the remaining 400 MW of capacity over the next three years seems unlikely. While the government continues to focus more on the sunshine segments of solar and wind, the SHP segment is suffering, primarily on account of delays in approvals and permissions. Such delays increase the gestation period of plants, reducing their viability and increasing the capital costs further. Private players might also lose interest in the segment due to the high tariffs and modest returns involved. In addition, seasonal variability and unpredictable rainfall restrict power generation, thus affecting revenues. There is a need to regulate and formulate processes for monitoring SHP projects. 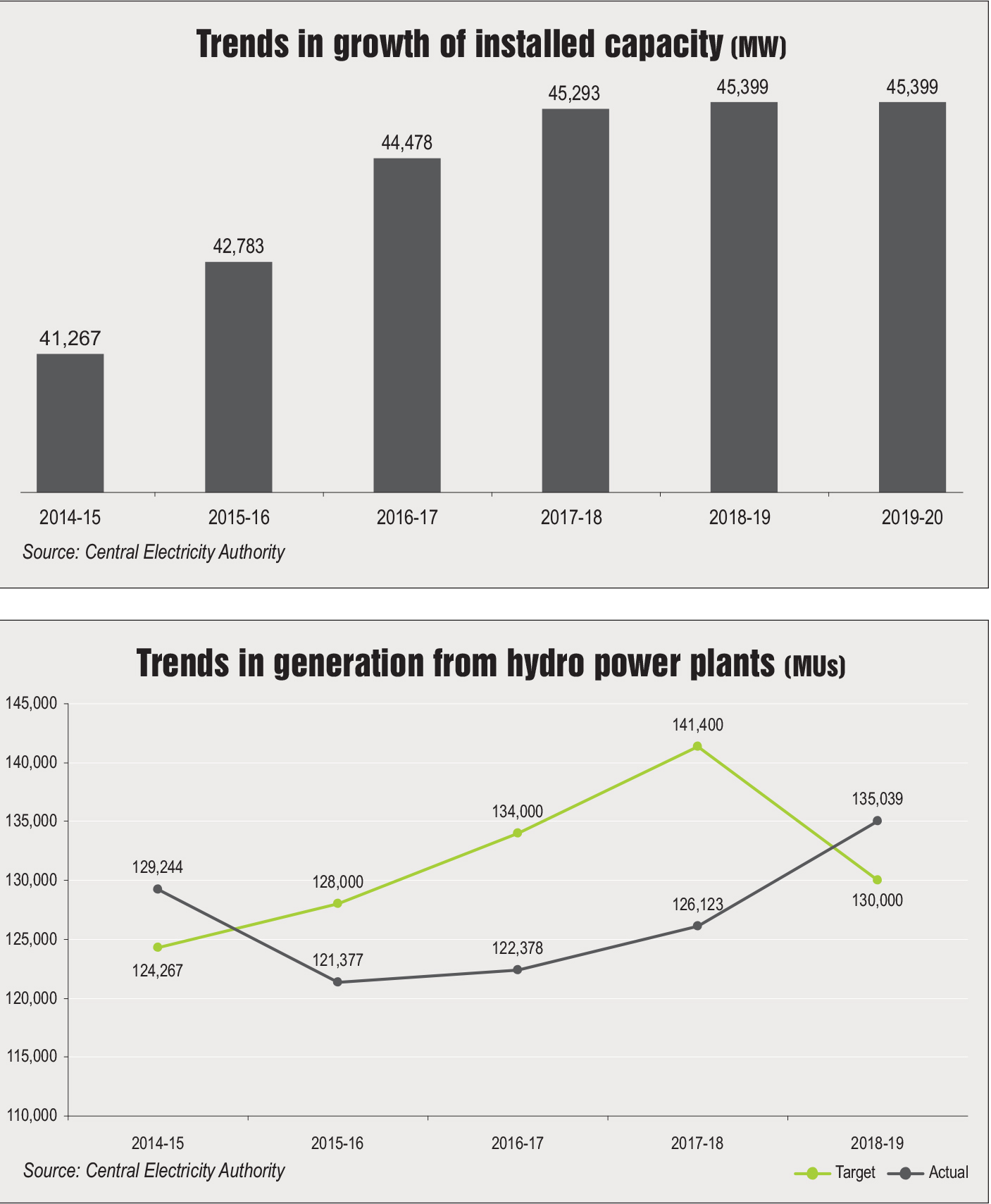 The total pumped storage hydro capacity stood at 4,786 MW across nine stations, as of April 2019. The largest pumped hydro capacity of around 2,006 MW is installed in the southern region, spread across three stations. Apart from this, 745 MW of pumped hydro storage capacity has been installed at the Nagarjuna Sagar and Panchet hydropower plants. Of the existing nine pumped storage plants, only six plants aggregating 3,306 MW are operational. Further, three pumped storage plants aggregating 1,205 MW are under construction. These are the 1,000 MW Tehri Stage II (Uttarakhand), 80 MW Koyna Left Bank (Maharashtra) and 125 MW Kundah Pump Storage Phase I (Tamil Nadu) plants. Another 7,020 MW of pumped storage plants are in the pipeline. The detailed project report for around 1,000 MW of this capacity has been approved by the CEA while around 6,020 MW of capacity is under survey and investigation. The Institute of Energy Economics and Financial Analysis, in its report released in March 2019, estimated that the pumped hydropower segment in India requires new investment of at least $20 billion in the coming decade. 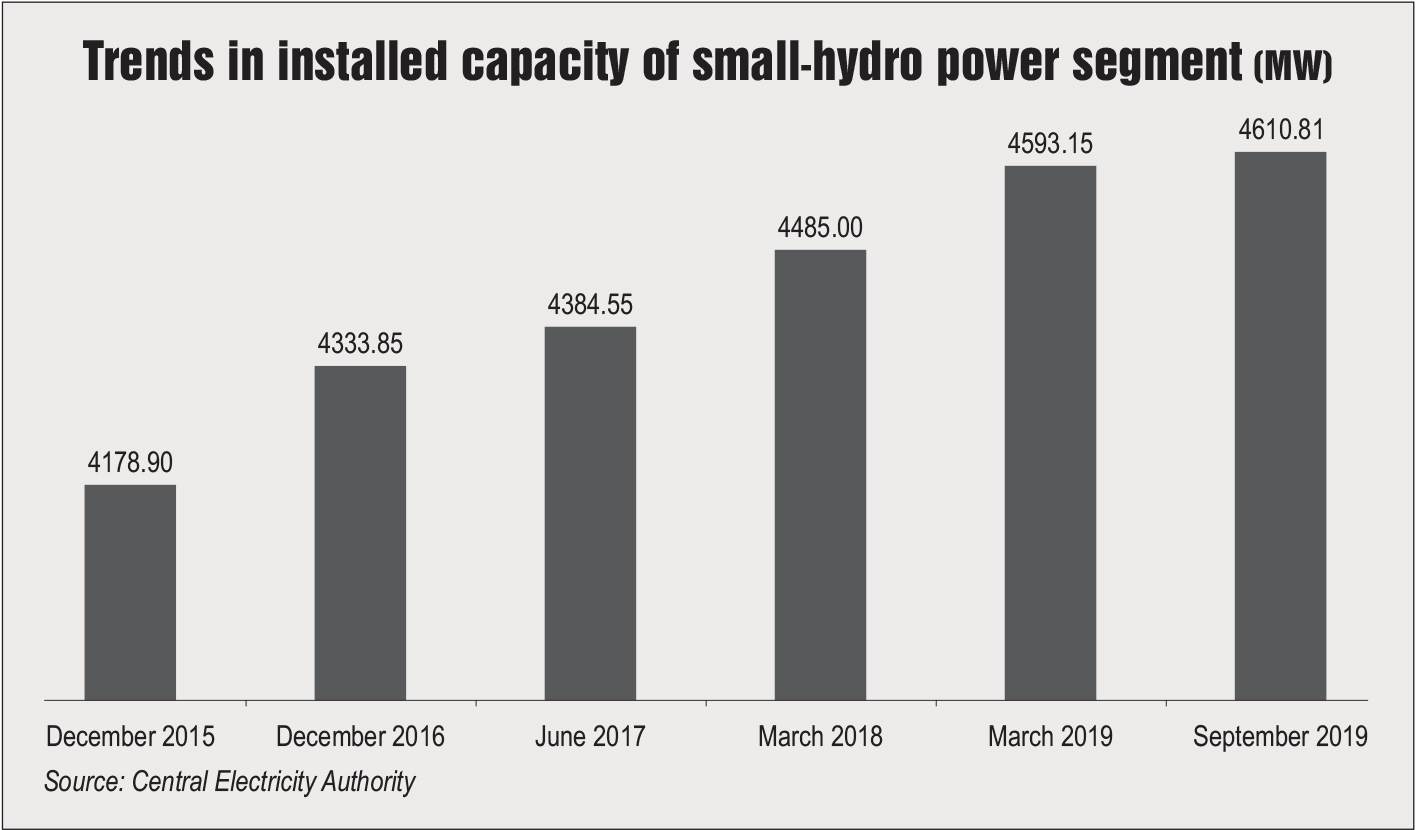 The single most important development in the hydropower segment in 2019 has been the change in its status from a conventional energy source to a renewable energy source. This policy reform is expected to impact around 4.7 GW of stalled and 12 GW of stressed under-construction hydropower capacity. Moreover, the inclusion of HPO under non-solar RPOs would make it mandatory for offtakers to procure hydropower. Further, the policy includes provisions for funding of enabling infrastructure as well as flood moderation and storage components through a grant from the Ministry of Power.

The approved policy also provides the freedom to determine tariffs through tariff rationalisation. Hydro tariffs have traditionally been determined on a project basis by the regulatory authorities in consultation with developers. With the decline in renewable energy tariffs, hydropower tariffs have lost their competitive edge. Tariff rationalisation includes backloading of tariffs after increasing the project life to 40 years and increasing the debt repayment period to 18 years. The regulatory commission has been directed to provide upfront approval to tariffs that are calculated as per these guidelines. The measures also include mandatory tariff escalation of 2 per cent per annum. The implementation of the rationalisation measures proposed in the new approved policy is expected to reduce hydropower tariffs. The impact will be more pronounced in the long term rather than the short term as the measures apply to upcoming projects.

In May 2018, the Himachal Pradesh government notified an amendment to the state’s hydropower policy, rationalising the royalty rates for the allotment of new projects. In the case of the already allotted hydro projects, the amendment has deferred 12 per cent free power for the first 12 years of operation. Further, the Himachal Pradesh State Electricity Board is to purchase the power produced by hydropower plants of up to 10 MW. Also, the amendment has notified that the generic tariff for hydropower plants of up to 25 MW will be applicable from the date of commissioning and not from the date of the implementation of the agreement. Meanwhile, wheeling or open access charges have been waived for plants up to 25 MW of capacity.

In July 2018, the Central Electricity Regulatory Commission (CERC) passed a landmark order for a pilot project on 5-minute scheduling, metering, accounting and settlement for thermal/hydro, and fast response ancillary services for hydro. As per the order, the Power System Operation Corporation (POSOCO) in coordination with the central transmission utility will implement 5-minute metering at hydro stations in the northern, eastern and north-eastern regions, and at thermal power stations in all five regions to gain experience. This will help in determining the technical and software specifications for metering software at the regional load despatch centres and the accounting software for 5-minute metering.

In the same month, the CERC released the Cross-Border Trade of Electricity [CBTE] Regulations for the participating entities in India and neighbouring countries engaged in cross-border electricity trade. The new guidelines allow mutual agreements between Indian and cross-border entities under the overall framework of country-to-country agreements. It also removed restrictions in terms of contracts through which the participating entities can trade on the Indian power exchanges. This has, for the first time, allowed trade in the day-ahead market on the exchanges.

In July 2019, the CCEA approved NHPC’s 2.8 GW Dibang multi-purpose project in Arunachal Pradesh. The approval includes an expenditure of Rs 16 billion on pre-investment activities and clearances for the project. The project is estimated to be constructed at a cost of around Rs 280 billion. In the same month, the National Green Tribunal dismissed a plea to reconstitute a committee to study the 2,000 MW Lower Subansiri hydropower project on the border of Assam and Arunachal Pradesh. The project has now been approved and construction is expected to begin by the end of the year. The CCEA also approved an investment of Rs 42.9 billion for the construction of the 624 MW Kiru hydropower plant to be implemented by Chenab Valley Power Projects Private Limited. 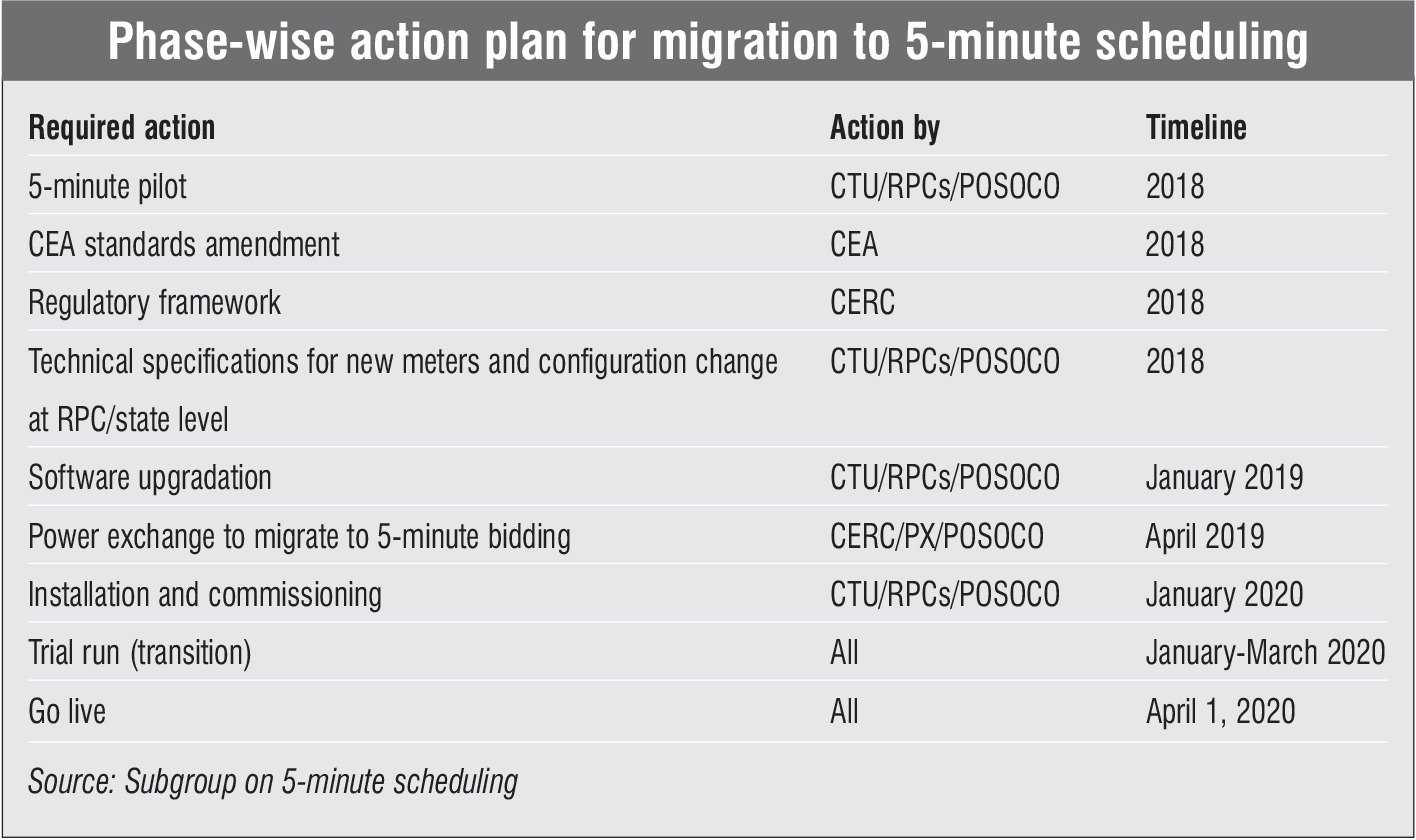 Project financing is one of the biggest challenges in the segment. As of February 2019, there were 13 stalled hydropower plants in the country, with 4,706 MW of installed capacity. This has resulted in a total cost overrun of around Rs 274.99 billion. These projects have been stalled owing to a liquidity crunch, and legal and regulatory hurdles.

The financial stress in the hydropower segment is mainly caused due to time and cost overruns in project execution. The reasons, such as natural calamities and geological surprises, are beyond the control of the developer. By the time the project gets completed, the tariff required to meet the capital servicing requirement reaches as high as Rs 5 per unit, and the discoms are reluctant to sign power purchase agreements for such high cost of power. In such a scenario, either the promoter becomes unwilling to put in the required equity or the developer loses interest in taking the project forward, leading to a build-up of stalled power plants.

It is not always feasible to manage cost overruns by increasing the debt repayment period. One of the possible solutions for making a stalled project viable is by way of a haircut on debt. Some plants may become viable with a haircut of 30-60 per cent. However, currently, banks are unwilling to take such haircuts.

Meanwhile, forest and wildlife clearances are a major cause for delays in hydropower projects in addition to land acquisition, rehabilitation and resettlement challenges. The tightening of environmental norms will further delay project execution. 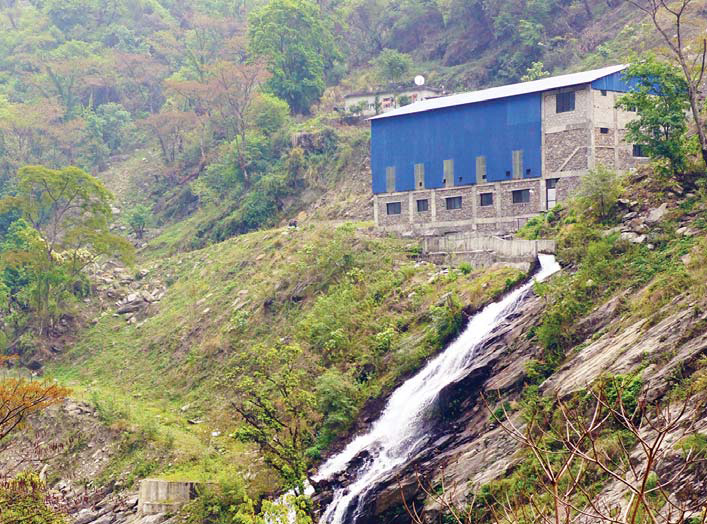 A total of 36 projects are currently under construction, of which 13 are stalled and the remaining 26 are anticipated to be commissioned between 2019-20 and 2022-23. These projects entail a total expected cost of Rs 659 billion. If all these projects are developed within the stipulated time, the installed capacity of the hydropower segment will increase to over 57 GW by 2023-24. Notably, about 70 per cent of the upcoming hydropower capacity (3.7 GW across 25 projects) is owned by private developers, entailing an investment requirement of around Rs 310 billion. This is a good sign for the hydro segment, which has seen limited private sector involvement so far.

An enabling policy environment continues to be a challenge for the hydropower segment. Not much has changed since the cabinet gave its approval to the policy, as a formal policy is still awaited. According to one school of thought, even if a formal policy is introduced, it will have little impact in the short term and the outcome will only be seen in the medium to long term.

It is important for the industry and the government to realise the potential of hydropower in meeting India’s climate change targets and to bring about reforms that enable greater capacity addition and power offtake. Hydropower deserves the same attention that is given to wind and solar. Therefore, as the country is looking to scale back coal-based power generation to reduce its carbon footprint, the government should increase its focus on the hydropower segment, which has the capability to provide flexible generation, fast ramping and regulation services along with greater grid balance.