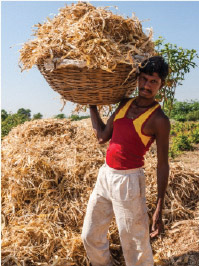 Post his retirement from the Indian Army, Lieutenant Colonel Monish Ahuja incorporated Punjab Renewable Energy Systems Private Limited (PRESPL) in 2011, with an aim to build a viable ecosystem of biomass supply chain management. The company started operations with a 12 MW paddy straw-based power plant in Patiala, owned and operated by Punjab Biomass Power Limited. While in the initial years of operations, PRESPL worked exclusively on this project, it has now expanded its presence in over 11 states. During these years, PRESPL worked with industries to support their shift to clean energy. This has been done by selling them steam generated from agricultural waste.

How the business model works

Different types of agricultural waste are collected from farmers, depending on the geography and the crop pattern. For instance, in north India rice straw and cotton stalk is collected, while in central India soya husk and sugarcane tops are collected. PRESPL provides bailers and chippers to the farmers to assist them in pre-processing the agricultural waste before it is transported to the company warehouse. There is a small time frame for the collection of agricultural waste. In Punjab, there is a window of 35 days while in other states it varies from 60 days to 90 days. Over 200,000 metric tonnes of biomass waste is stored for the full year. PRESPL believes that the most efficient way of managing waste collection is building an entire ecosystem of supply chain management within a radius of 50-100 km from the plant. Apart from providing raw material, the farmers are responsible for transporting the agricultural waste from their farms to the warehouses and again from the warehouses to the plant site using their tractors or trollies, and they get paid for this service. This gives them a secondary source of income. For taking up these responsibilities, farmers are paid Rs 2-Rs 3 per kg of biomass. The agricultural waste collected then goes to the briquetting facilities (owned by PRESPL) and briquettes from these facilities are transported to the steam generation plants (owned by PRESPL). At these plants, biomass briquettes are burned to form steam. This steam is then sold to industries. These steam generation plants are set up either inside such factories or very close to them.

By selling steam directly to the industry, PRESPL is also to avoid the challenges faced while working with distribution companies. One boiler is under construction in Punjab, co-located with Sun Pharmaceutical Industries Limited. And the construction of the second one in Bhopal, co-located with Lupin Limited will start in November 2019. Both of these boilers   will start commercial operations from 2020. PRESPL has already tested this business model and is operating assets for sale of steam energy to PepsiCo in Punjab and Cipla in Maharashtra. These off-takers have long-term contracts of 10-15 years to buy steam from PRESPL. On the expiry of the contract, the offtakers have the option to either extend the contract at renegotiated terms or buy the facility at a depreciated book value. The collection, storage and transportation of the entire agricultural waste and its conversion to steam is a challenging task. PRESPL manages around 25 warehouses, in decentralised locations. In addition, the company has to ensure that the quality of the biomass waste in warehouses does not deteriorate, and that farmers are incentivised to work with it. Taking on the risks associated with local supply chain management activities, and clean and cheap energy supply is as challenging as it sounds.

At present, there are only a handful of commercially viable examples of sustainable biomass logistics projects. It will be interesting to see if PRESPL can maintain its good financials once it starts expanding on a pan-India level. To fund its expansion plans, the company has received private equity investments from various investors. responsAbility Investments AG invested $2 million  in PRESPL’s series-A funding carried out in September 2013. PRESPL then received a series-B investment of $5 million from the NEEV Fund in April 2019.

In September 2019, the company closed its Series-B round of funding by raising $3 million from Shell. The funds will be used for business expansion and for setting up more briquetting plants and boilers. Though at a small scale, PRESPL has built a circular economy of sorts. It takes the raw material from the farmers, converts it into clean energy and sells it at competitive prices. The by-product ash, which has high carbon content, is put back in the soil. In this process, the company builds a circular economy, which benefits all and is also commercially feasible for PRESPL. In fact, through this cycle, the company helps increase the income of farmers. This can be a case study for many other biomass companies that are currently incurring losses in their efforts to become a sustainable brand.